Shelter From The Storm

Shelter From The Storm

The rippled and rolling Flint Hills of eastern Kansas provide spectacular views of one of the world’s only remaining tallgrass prairies. But that’s not what attracts photographer Tom Parish to this landscape; he finds beauty in what lies below.

Scattered beneath the big bluestem pastures lie arched-roof stone cellars, monuments to homesteaders who tried to set down roots in this area starting in the mid-19th century. “I have come to admire these structures for their hidden beauty,” Parish says. “They played an important role in the lives of the early homesteaders in the Flint Hills.”

Documenting exactly what role these “caves” played in settlers’ lives has become his obsession. It all began when Parish, who grew up in the heart of the Flint Hills at Manhattan, Kansas, was working on a master’s degree at Kansas State University.

“I thought about photographing what I called ‘places of last resort,’ structures that had been abandoned,” he recalls. “Once I started working  with the caves, I realized they could be the focus of the entire project.” What surprised Parish, however, was how little history had been recorded about these stone structures; seldom could he find who built them, or when, or why. “Obviously, they were used for such things as food storage and shelter from the prairie storms,” he says. “I also have found evidence that settlers lived in them while building a proper house for their new homestead.”

Open the geode. Parish, now the visiting professor of digital humanities at Kansas State University’s Chapman Center for Rural Studies, set out to document these structures with a meticulous approach. “I hope to preserve and present these structures in a new and visually stimulating way,” he says. He takes hundreds of pictures, carefully lined out in rows and columns, using only the natural light that drifts into the structures; due to the long exposure times required, it’s not unusual for Parish to spend six hours taking pictures in a cave.

“I use technologically advanced photographic techniques to create as extremely fisheye a photo as is possible to make, being 360 degrees horizontally and nearly vertical, too,” Parish says. Then the work really begins, as he digitally “stitches” the images together into a large and detailed final photograph. “That process can take upwards of a hundred hours of painstaking computer work,” he adds. 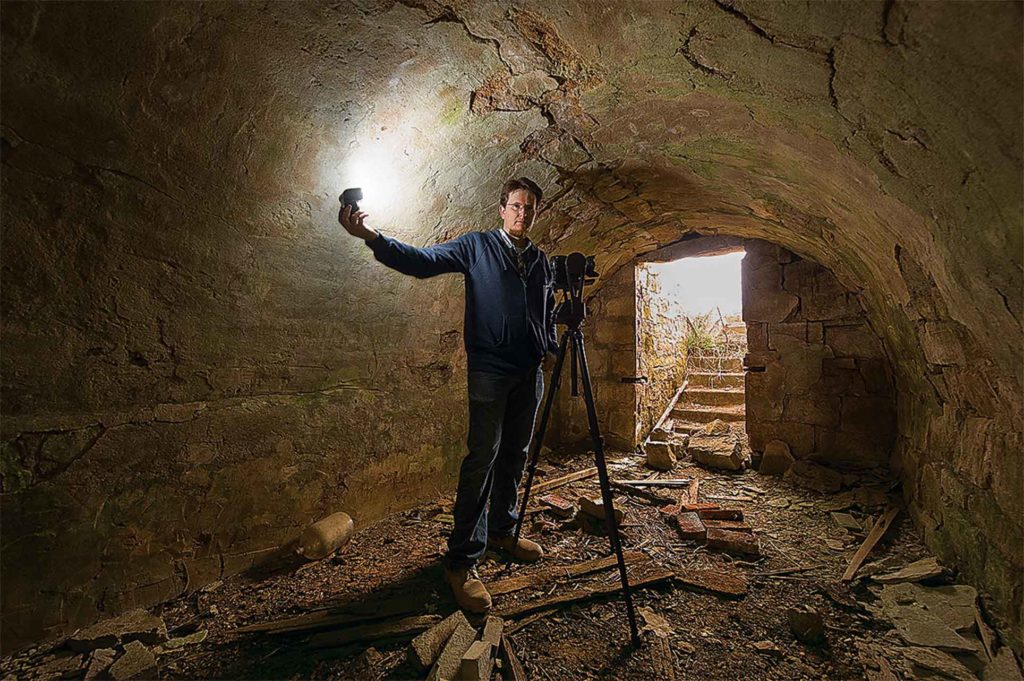 Tom Parish works only with natural light, but allowed his portrait to be made with electronic flash.

“The process is a lot like the way these structures were built,” he observes. “There’s a lot of picking and choosing, cutting and stacking in order to make it all work out.” Parish compares his efforts to photograph these structures with the splitting of a geode; hidden inside an ordinary round stone may be a world of crystalline beauty. “These caves that are dark and repulsive at first glance can be beautiful when you see them in the proper light,” he says.

By taking a standardized approach to his images, Parish is able to expose each structure’s subtle but unique characteristics. “Chisel marks on the native stone, which were harvested from local quarries or gathered from surrounding pastures, are like the lines on your palm,” Parish says. “These images document the fingerprint-like quality left by the homesteaders who originally built the structures.”

Fine-art fit. These crisp and detailed images have found another fit with the public; they have proven to be a popular exhibit in art galleries. Printed large — the biggest is 17 feet wide and 8 feet tall — they offer such a realistic experience that many viewers say they can almost smell the musty aroma of the cellar they played in as kids.

“Tom’s finished photographs are quite beautiful and compelling,” says Patty Reece, who recently brought the exhibit to the Volland Store. The store was once a bustling rural mercantile center for the Flint Hills, but went into disrepair as the town of Volland dried up. Patty and her husband, Jerry, have restored it as an event center as well as a place for art and community. “My goal is to present art and events at the Volland Store that have a connection to the culture and heritage of the Flint Hills,” Patty says. “I thought Tom’s photographs would make a stunning visual statement on the brick walls of the Volland Store. They exceeded my expectations.”

Parish continues his cave quest, having found more than 300 such structures mostly in four Flint Hills counties. You can keep up with developments in his project by visiting flinthillshelters.com, the detailed website Parish maintains. “I hope viewers of my images will reflect on their own role in the world, what they will leave behind,” he concludes. “We can learn a lot from these humble structures.” 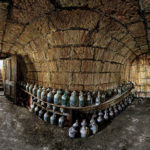 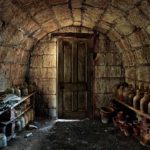 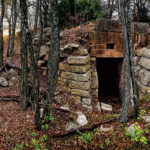 Built in the 19th century and long abandoned, this stone cellar now serves only as a silent monument to early settlers. 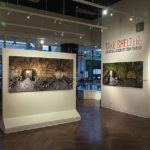 Printed to giant proportions, photographs of these arched-stone structures have become popular in art exhibits.

Barns For The Ages

Few in number, cantilever barns leave quite a legacy.

Quebec couple restores and lives in a 176-year-old home.