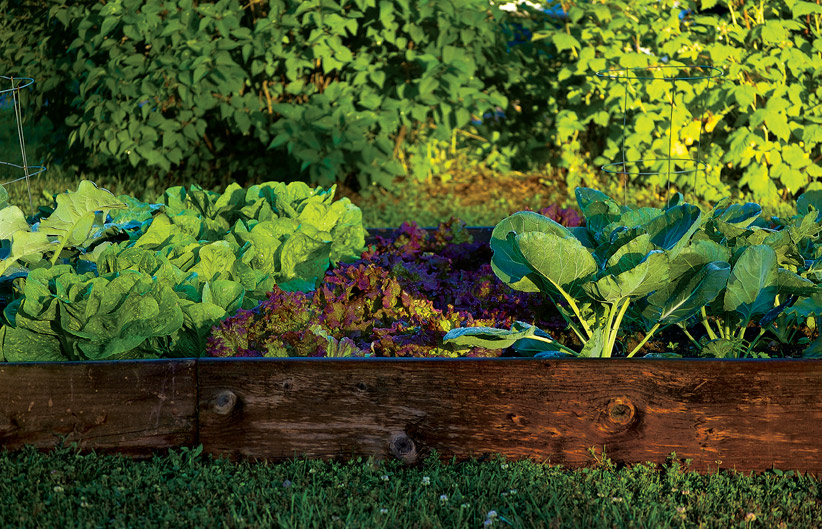 Raised beds can help gardens...but be careful what goes in them!

Raised beds can help gardens...but be careful what goes in them!

Nothing looks much simpler than raised bed gardening. Put up some boards, dump soil in the box, plant, do a little maintenance through the season with weeding, insect control and watering, and voila! Great veggies, right?

Hold on. Good raised beds, like anything else worth doing, require thought and preparation.

Start with the basics. Most of us want raised beds for a couple of reasons. They provide easier access for those with aching backs and knees. And, if our gardening spots are not blessed with good soil, raised beds let us make our own. That’s where things begin going wrong for many of us.

If the garden spot has good soil, a conventional garden might work best, in fact. David Berle, University of Georgia horticulturist, says raised beds also raise costs. You can build raised beds with prefabricated kits but Berle prefers going low-cost with materials already on hand, like pallets, lumber, baby pools, plastic barrels cut in half or even old cattle troughs with holes drilled in the bottom.

Some gardeners even use banked soil or stones gathered on the property. Don’t use treated railroad ties or tires because of chemical contamination.

Make it easy. The boxes should be three or four feet wide to make it easy to reach halfway across to work with plants. After all, access is a primary reason for having raised beds. If they are too big, that defeats a major purpose of making them.

Visit Berle’s research plots at the horticultural facility outside Athens, Georgia, and you see first-hand how conditions can vary from one raised bed box to another. For Berle, soil organic matter makes the big difference for gardening success.

He tested several soil mixes to see what would work best in raised beds: pure compost made from brush and leaves on the university campus, potting soil that can be bought in garden stores, wood  chips, pine bark, and plain old north Georgia soil.

In his analysis, Berle considered which raised bed mix produced top yields, of course, but also which had the least environmental impact.

“We looked at how much carbon dioxide was released into the atmosphere by these practices. It turned out that the biggest carbon release came from wood chips. It was a tremendous amount. A fairly high amount of carbon was also released from the potting soil and compost mixes. The least amount released came from clay soil,” Berle says.

Best mix. “For production, the best mix was potting soil/compost. But for global consideration, clay is best. Plus, anytime carbon is released, total volume is reduced. You actually lose inches of soil mixing with wood chips or potting soil,” he says.

“If everybody filled their raised bed box with plain old clay soil, the amount of carbon released into the atmosphere by gardeners would be smaller.  It’s something we need to be aware of today.”

That’s an interesting premise when considering raised beds. Many start using them because they consider their garden plot soil to be unproductive.

“When someone says they want raised beds, my first comment is always why? What’s the goal?” Berle says. “Most gardeners in Georgia say it’s because of the red clay soil, which is largely what we have here, at least in this part of the state.”

That led Berle’s testing clay against several different soil building combinations, like wood chips and potting soil, against a check plot of clay alone. He grew kale and basil in the boxes.

“The compost/potting soil mix was the best for production. But clay was a pretty good second. The worst was wood chips, by far,” he says.

Building soil. Soil productivity can be a serious problem on many Southeastern properties, he says, since forests in the area were mostly cut over by the mid-1800s. The resulting erosion washed away much topsoil and depleted organic matter, a problem still besetting many Southerners.

“When you have really bad native soils, raised beds with imported soil can be a solution. Some people really have little choice about it,” Berle says.

Raised beds might address garden accessibility and soil quality issues but also come with some inherent disadvantages, Berle says. Soil dries out quicker in raised beds, requiring more frequent watering. Tilling them also causes problems in many cases. From a practical standpoint, tillers are difficuilt to manuver in the boxes. That means gardeners wanting to mix or fluff soil must break out the hand tools, creating a bit of extra early spring work. On the other hand, if you mess up a raised bed box with the wrong soil mix or a configuration that doesn’t work for you, it’s fairly easy in the offseason to break it all down and start over.

Looking at it that way, gardening decisions like this require considering offsetting positives and negatives. The good thing with raised beds, though, is that if you make a decision that doesn’t work out right, you aren’t stuck with it long-term. Come spring, you can try something different.

Increasing interest in gardening in general keeps Berle busy. A University of Georgia horticulure professor for 13 years, he’s in demand both on campus and off. “All our classes in fruit and vegetable production and organic gardening are full,” he says. “We have more than 50 students majoring in horticulture. Most of them had never been close to a real garden before. We’re also partnering with interesting local school gardening programs.”

Quebec couple restores and lives in a 176-year-old home.