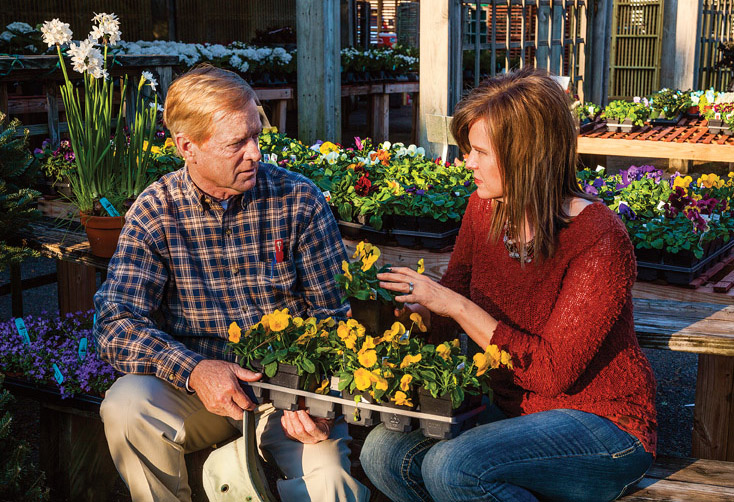 It’s an unusual sight. A man stands chest deep in a hole in the ground, and dozens of people are gathered around to hear what he has to say about the dirt he’s holding in his hand. But he’s already pointed out to them that “dirt” is really a not the politically correct term. Not enough respect. This is “soil” from the Plains of Texas, and, like any soil, it’s a complex thing, with minerals and organic matter, microorganisms and macroorganisms, bacteria, fungi, and such. Because these people own their own soil — on small ranches and homesteads —they know they need to understand it better.

“I seldom get questions when doing presentations,” says Jake Mowrer, Texas A&M soil scientist. “But when it’s over, they’ll pile on with questions.” The reason? This is probably the first time they’ve given any thought to what’s below the surface.

Mowrer invites them to learn a hand texturing soil test by spraying water into the soil they hold in their hands, then kneading it. It’s a useful test for soil scientists — and now for this group as well. Learning about soil is something everyone here needs to know, whether he or she wants better pastures for their horses or simply to grow better tomatoes or vegetables in their home gardens.

Many subjects. Soil is just one of the many subjects these landowners will learn in this week-long workshop, Ranch Management University, near College Station, Texas. Also, they’ll learn about getting more fish from their ponds, controlling weeds in their pastures, and even managing their land for wildlife. The program, held twice a year by Texas Agri-Life Extension, is just one of many that help people new to the land learn a better way of life.

“We have a lot of small farmer workshops,” says Travis Miller, interim director for state operations with Texas A&M AgriLife Extension. “Today we are seeing a massive move of people from the city to buy small pieces of land. They want to get out of the city. They want to enjoy country life.” Many know little about country living and little about how to be good stewards of the land. Here, they’ll learn.

If you like the idea of Ranch Management University, the good news is there’s something similar where you are, regardless of state or province. After all, this is Extension, and it’s what Extension does — take the best knowledge from a local university and “extend” it to the people. Extension, now more than 100 years old, is one of the most successful programs government ever created.

People who grew up on farms and ranches are well familiar with Extension, which has origins dating back more than a hundred years. Congress had already created higher education in every state in the U.S. with the Morrill Land-Grant College Act of 1862. The only trouble was most of the population at the time — farmers and their children — didn’t have the time or the money to attend.

By the early 1900s, a few people had the novel idea that a college could spread its knowledge by taking the knowledge to the people. Booker T. Washington had his “moveable school,” the Jessup Wagon, at Alabama’s Tuskegee Institute, a college for African-Americans. Fellow teacher and star researcher George Washington Carver was one of several at Tuskegee who traveled the rural roads and taught farmers the latest production technology.

But it was Seaman Knapp in Louisiana who gets most credit. He used railroad agents to travel the rails, spreading new information into the country. He helped ensure the passage of the Smith Lever Act in 1914, which created Extension for the nation.

Today, Extension education reaches into many aspects of people’s lives. Think of any issue —  food safety, insect control, rural development, caring for a herd of goats — and know you have an Extension specialist you can call on to give you advice.

One popular and growing effort is the Master Gardener’s Program. For a nominal fee and a promise of volunteering in the community, any avid gardener can receive a thorough education in gardening. Graduates of the program — more than 100,000 — sometimes compare what they learn to getting a college education in horticulture.

Some people decide to take Extension eduction well beyond a hobby and turn it into a profession. That’s what Charles Brown did. In addition to a successful career in coaching and scouting for college football — for coaches such as Jackie Sherrill — Brown learned how to be a professional rancher. Today, his Lazy B-5 Ranch near Bryan, Texas, raises purebred Brahman cattle. Brown will be the first to give the credit to Extension. “All of this started with Extension,” says Brown, who’s traded the football field for a hay field. “You’ve got everything with Extension. Gardening, canning, managing the land. This is my recreation now.”

Vast experience. Billy Angell has been in the gardening business for 40 years, the last 25 as owner of a nursery in Mountain Brook, Alabama. Despite all that he knows, he still has reasons to call on the specialists at Extension. “They’re a tremendous reference for us,” he says. “I think of them as the Google for the industry. They see so many problems that if one of our customers comes in with a problem — a disease or bug problem — chances are good that Extension has already worked with it.

“I use the horticultural part, but there’s so much more,” adds Angell. “They’re just good folks.”

Good biosecurity could save not only your birds, but millions of others.