The Art Of Gardening

The Art Of Gardening

This garden is special, and a visitor senses it quickly. It is large but also quaint, entered by way of a few stone steps close to a brown, adobe house. A low stone wall gives the garden a slight rise. Narrow pathways wind through and around the vegetables, crossing small trenches of water, a rare, essential element for a garden this far into the high, dry desert of northern New Mexico. Along the garden’s center path, hollyhocks stand erect, lifting their large pink and yellow blossoms to a brilliant blue sky.

Yes, this garden is extraordinary for it inspired one of America’s best-known artists, Georgia O’Keeffe. She painted many subjects in her lifetime — buildings, landscapes, seashells. But for many art lovers, she is best known for her abstract, free-flowing paintings of flowers, extreme closeups of stamens and pistils framed by colorful petals.

Just last year, one of those paintings, Jimson Weed/White Flower No. 1, sold for $44.4 million, making it not only one of the most valuable pieces of American art, but also the most expensive by any female artist. Visit the garden and surrounding home grounds and you’ll find the inspiration still here, growing close to O’Keeffe’s studio.

On this summer day, high school students are busy tending the short rows of the garden — squash, beans, lettuce, chard. The children are a part of this story, too, because they are restoring this garden, making it just the way it was when O’Keeffe lived here. The artist died in 1986 at the age of 98, and her garden was an important part of her life.

Disciplined gardener. “I see her garden as an extension of her creative drive” says Carolyn Kastner, curator of the Georgia O’Keeffe Museum located in nearby Santa Fe. “I look at her art and I see that she was a disciplined person. When I look at her garden, I see the same thing.” 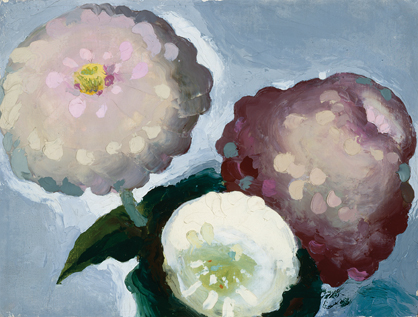 Born in 1887, Georgia O’Keeffe was raised on a Wisconsin dairy farm, so it was only natural that she would be a gardener. But at an early age, she had an unusually strong desire to become an artist. Early years were frustrating, but by the early 1920s the art world recognized her as the rising star in American modernism. She was one of the few artists working abstractly, with a style distinctly different from European artists. Her subject matter was mostly the America she saw in New York, buildings and skyscrapers. But when she visited New Mexico in 1929, she found new inspiration. “O’Keeffe was one of the most significant artists of the 20 century, and New Mexico drove her art,” says Kastner. “She found there was more to America than skyscrapers. O’Keeffe was dedicated to her artwork, first and foremost. The indigenous people, the architecture, the unusual plants—these are the things that lit up her imagination in a whole new way.”

Keeffe returned to the state year after year, painting mountains, desert plants, flowers, and sun-bleached bones. By 1940, she had moved here, buying a house and 7 acres on Ghost Ranch. But she kept returning to the small, rugged village of Abiquiu a few miles away. What caught her eye there was a small, crumbling adobe house, built in the  mid-1700s, own by the Roman Catholic Church. After 15 years of negotiation, the church finally sold it to her. The house was a wreck, but the three acres had something special: water.

O’Keeffe wanted a garden. If she was to live and work in this remote area of the country — and eat good, nutritious food — she’d need to grow it herself. The house in Abiquiu was on an ancient irrigation system, an acequia, and whoever owned this property had rights to use the water. The highly mineralized water came from a mountain spring, carried into the Abiquiu community by simple ditches whenever a floodgate upstream was opened.

A friend, Maria Chabot, helped O’Keeffe renovate the house and drew plans for the garden. Those plans, what O’Keeffe read about gardening, what she wrote in her gardening journals — all are preserved by the O’Keeffe Research Center. So are the many gardening catalogs she used, with varieties circled and her thoughts written in the margin. O’Keeffe was an avid reader of sustainable gardening techniques, well ahead of her time during an era when using DDT was becoming common practice. 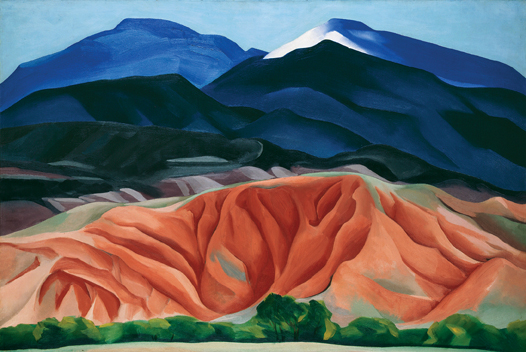 Organic enthusiast. “The things she would circle and have notes on were organic, natural methods,” says Mollie Parsons, education director at the Santa Fe Botanical Garden. Parsons studied O’Keeffe’s many papers thoroughly as she was planning the garden restoration. “It was exciting. I saw all kinds of leaves of paper. She’d use the backs of letters to make gardening lists.”

When Parsons began the restoration, many of O’Keeffe’s plants were still here — the fig tree, the pear and apricot trees, the lilacs. After O’Keeffe died, the garden had turned to a lawn except for a small space so the property could retain water rights. “If you don’t use it, you lose it,” says Parsons. “This restoration really emerged from Pita’s desire to have the garden up and running again.”

Pita is Agapita Judy Lopez, who was O’Keeffe’s secretary in her later years. Today, Lopez watches over O’Keeffe’s home as director of Abiquiu Historic Properties, dedicated to preserving the adobe house and three acres just as Georgia O’Keeffe left it in 1984. Lopez’s grandfather was O’Keeffe’s gardener and her mother was the artist’s cook.

Stopped in time. One of Lopez’s many missions at this famous adobe dwelling has been to stop the clock of time. “It is almost as if she stepped out for a while and she will come home anytime,” observes Lopez. “People who come to visit get a better idea of her art by seeing how she lived.”

Inside, the furnishings are utilitarian and simple. Modern, too, with furnishings by Eero Saarinen, Charles Eames, and Isamu Noguchi. But it’s also rustic. The dirt floor is coated with a thin mixture of flour and water, smoothed and hardened to a one-eighth inch thick surface. It is clean and contemporary. Above, rough timbers hold up the flat adobe roof. O’Keeffe installed large windows in her adobe studio and bedroom, and from there she could watch the Chama River Valley below run its ribbon of life through the brown landscape. Throughout the house, on shelves and window ledges everywhere are the many objects O’Keeffe found on her walks through the desert — stones, old branches, and sun washed bones.

Simple, elegant. The kitchen and pantry reflect a 1950s modern America. Huge, upright freezers kept much of her harvest, but she also dried and canned foods. The pantry still has dried herbs, a butter churn, and plates and pots. A Philco radio sits on the kitchen table she made by placing a piece of plywood on two sawhorses. Simple but elegant.

Everything is as O’Keeffe left it, and now, the garden is as well. This will be the third year of restoration, but already the garden is in full production because Parsons enlisted the help of students from local high schools, interns who have named their work simply as “The O’Keeffe Garden Project.” 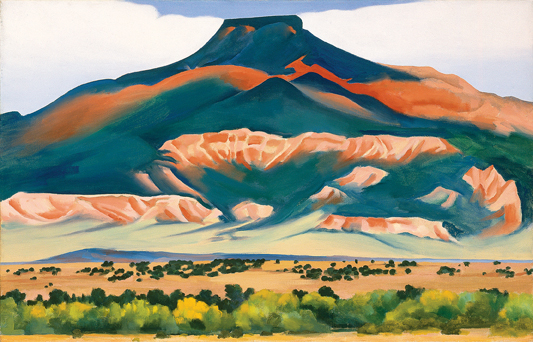 Parsons says the students’ work brings the home full circle, keeping it connected with the community O’Keeffe loved so much. “I think this has been a powerful experience for the students,” says Parsons.

Last year, they harvested more than 500 pounds of vegetables and fruit, all donated to food banks in Abiquiu and Santa Fe. The project is part of a larger program that exposes the students to interview skills and how to apply for college. They’ve taken field trips to museums and botanical gardens.

The students have put in hundreds of hours of work, planting, weeding, and harvesting. They still find ancient pottery shards and learn that this garden has a long history in the region, used by ancestors from more than a thousand years ago.

“It’s an internship to learn about the garden and history of farming, but they also learn about options for their futures,” says Parsons. “There’s something you really connect with when you’re gardening, that connects you to the past and to the future. If the kids get a glimpse of that, it’s just tremendous.”