Along the west coast of Ireland’s County Clare, where swells of the Atlantic Ocean thunder against rocky shores, a large region of limestone called the Burren is home to hundreds of ancient and historical sites built by farmers. Some of the ruins date to pre-Christian activities of the Celts; others are from the Dark Ages when Christians made Ireland a stronghold while the rest of Europe fell into chaos. A few that are more than 5,500 years old indicate that people were doing field work here as far back as the Stone Age. Together, the sites reveal important pieces of information about the world’s earliest food-growers.

Recently, farmers have started a Heritage Farm Tours program taking people onto their private lands to see these old ruins, places that before now have only been accessed by family members and friends.

The tours complement efforts by regional governments to promote the roles that farmers have played in the Burren since people first settled here. Many farmers have been working on projects that restore and protect their land’s archeology and natural features. In a crafty marriage of tourism and farming, through the tours they now can share their progress with the public.

Last summer, the heritage tours drew attention from Prince Charles, who with his wife, Camilla, walked among the terraced hillsides of Oliver Nagle’s land south of Galway. The visit garnered much attention, which pleased Dr. Brendan Dunford, the researcher whose work on the land benefits of the Burren farming practices instigated the current conservation work. 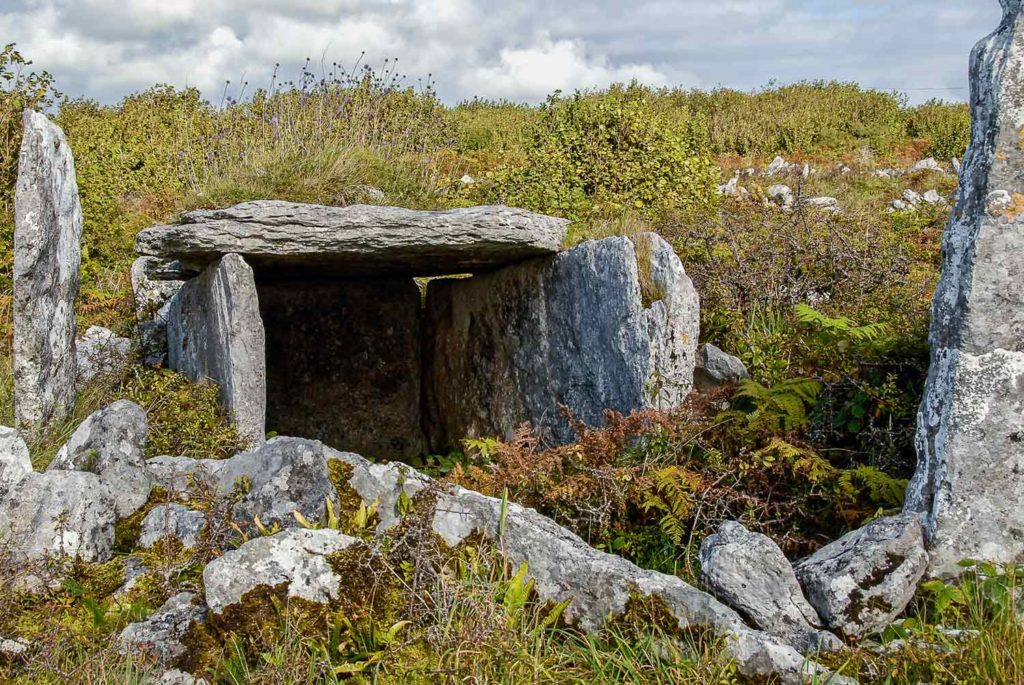 Pre-Christian tombs built as many as 3,000-6,000 years ago endure in the relatively undisturbed Burren farmlands.

“His visit will hopefully reinforce the message that these wonderful landscapes are also home to people who have shaped, and been shaped, by these places for millennia, and that the future of these people and their places is deeply intertwined,” Dunford says. “The Burren is Ireland’s greatest repository of natural and cultural heritage, and encapsulates our very essence as a people.”

Comprising about 100 squares miles between Galway and Shannon, the Burren (the Gaelic word Boireann, means “place of stone”) originated undersea 360 million years ago when calcified marine life and plant debris built up on the ocean floor and hardened over time. The fossil-rich rock was eventually uplifted out of the sea and folded into hills and valleys. Forests came and went, and glaciers scraped and polished the exposed rock into flat surfaces now called pavements.

Since the ice age, rain has been the Burren’s primary sculptor. Acidic rainfall slowly dissolves parts of the limestone surface into potholes and cracks that widen with time into deep crevices. The cracks and depressions hold a constant temperature, creating protected moist micro-climates that support ferns, wildflowers, and grasses. Some 600 of Ireland’s native plants grow here, including 24 of its 28 species of orchid. Water draining through the cracks has worn a complex system of channels and caves deep in the rock, a playground for spelunkers who travel from all over the world to explore it.

Because the “barren” Burren has not been particularly appealing to development, it is a treasure store of history. There are 2,700 recorded heritage sites belonging to every era from the Stone Age to today, including an estimated 75 wedge tombs (generally dated to between 3000 and 2000 BC), 500 ring forts (fortified pre-Christian homesteads), and hundreds of Bronze Age cooking sites, according to Dunford, who wrote a thorough analysis in his book, “Farming and the Burren.” There are also Neolithic burial mounds, ecclesiastical sites and holy wells, as well as remnants of early water troughs, livestock shelters, and field systems. Two significant ruins have been developed for tourism: Caherconnell, a medieval ring fort, and the Poulnabrone, a megalithic portal tomb that was found to contain human bones 5,800 years old along with evidence of an ancient farm economy that included cattle, sheep, and goats.

The farmer-guided walks follow ancient stone walls and paths and meander cross limestone pavement tableaus. Visitors can peer into wedge tombs, and see ring fort ruins. They can climb onto ancient burials mounds and stare into pristine natural springs. Far off, they might see wild goats scurrying up a hillside; close up, they can admire a single fern clinging to a fist-wide limestone crevice.

But the tours are not at all only about ancient sites. 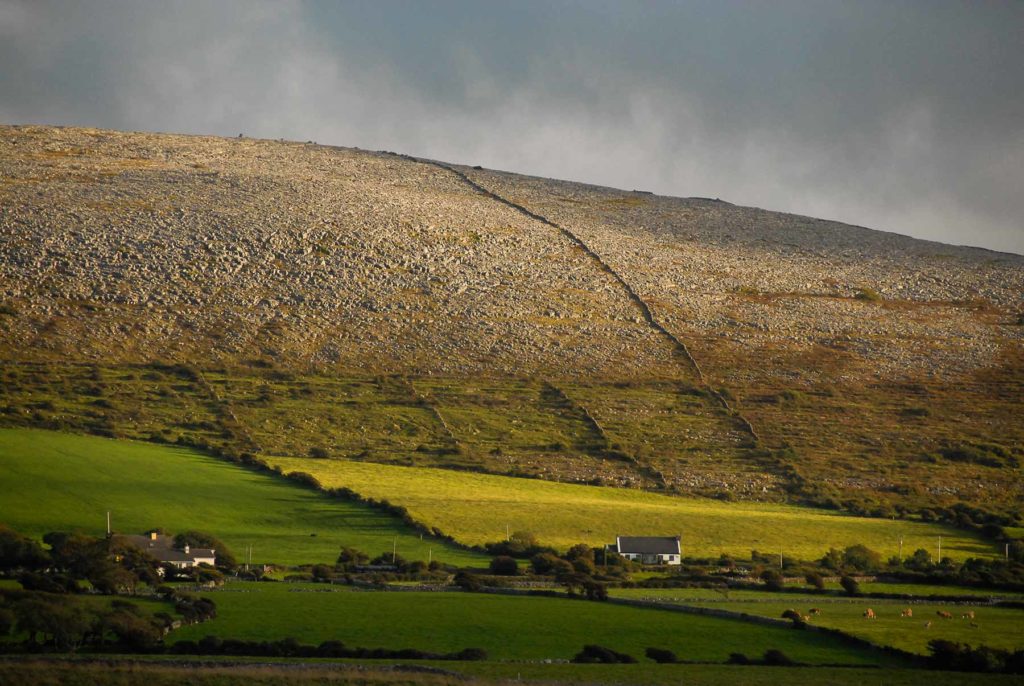 Contemporary farming practices occur on ancient lands of the Burren. The light impact of the Burren’s farm practices has preserved stone age artifacts from farmers working up to 6,000 years ago.

“People are interested in the wedge tombs and the ring forts, but most of them want to talk about what it is like to farm such a place,” says Frank O’Grady, who takes people to his property at Caherfadda (a Gaelic term meaning long fort.) “They are interested in the history of the farm, how the Burren as a landscape was farmed, and how we, in particular, came to be farmers.”

In a reversal of common practices elsewhere in the country, Burren farmers graze their cattle in the lowlands in summer and on the highlands in winter. The winter lowlands are too wet and muddy for the cattle, and cattle do better grazing there in the warmer months. The Burren’s limestone holds a constant temperature through the winter, creating good conditions for grass to grow during the colder months.

Oliver Nagle’s 72 acres of winterage pasture are in a spectacular location among terraced limestone hills that resemble spooky settings from “Lord of the Rings.” (In fact, an annual Burren Tolkien Festival in Lisdoonvarna postulates that the Burren inspired the great novelist.)

“The cattle go up before they calve in October, then don’t come down until the first days of February,” Nagle says. The animals remain in the uplands until Christmastime. “As the calves grow inside of them, we start to bring them down the mountain. By the time they are heaviest with calves, they are on the flat.” The animals are then hauled 14 miles away to the Nagle’s lowland summer pastures near the town of Corofin.

The Irish government and the European Union have been piloting the Burren Life Programme, reimbursing farmers for completing projects that restore and protect the Burren heritage sites and environment. As part of this “farming for conservation” effort, Oliver and his father, Patrick, have repaired two older springs and developed three new ones. They’ve constructed troughs at the springs, and created barriers that prevent cattle from polluting the water. Their work reducing acres of scrub has opened up more grazing ground, allowing them to boost their herd numbers. In one location, scrub-removal uncovered the new discovery of a very old stone herdsman’s hut. 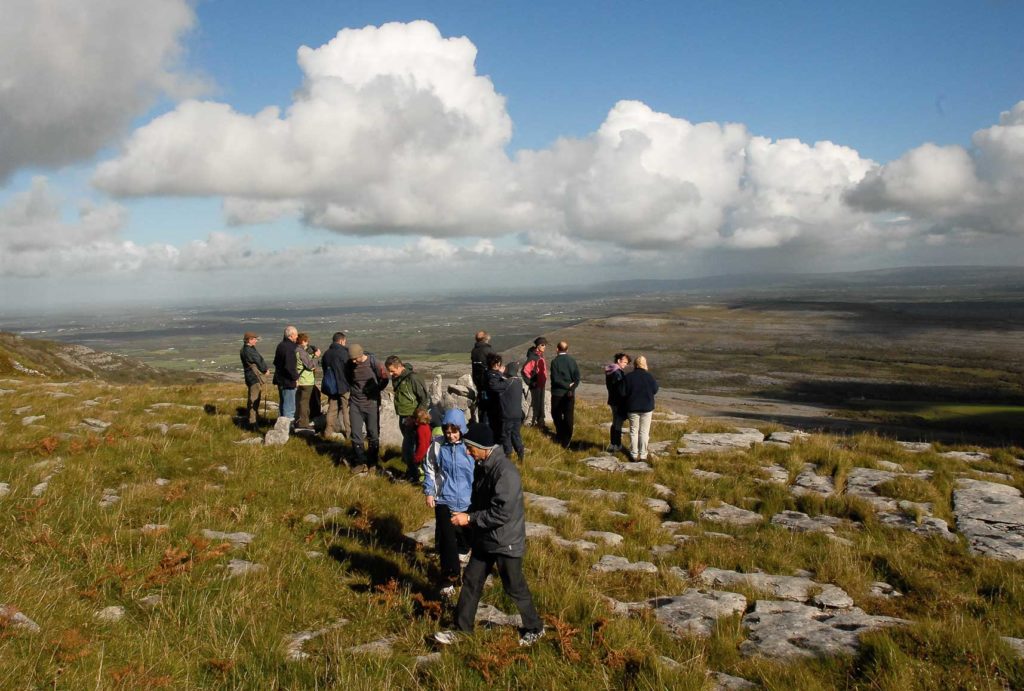 People on the walks get to do things that a more developed tourist site might not allow. For instance, on Nagle’s winterage upland, people can squirm through an underground souterrain (pronounced soo-terrain), if they aren’t afraid of small spaces. “To think you should have a man-made structure 600 to 1000 feet above sea level in a small corner of land — it’s magical,” Oliver Nagle says. “The slabs covering the roof weigh 3 to 4 tons apiece. I remember the first day my father showed it to me and my father remembers when his father showed it to him.”

Leading groups does not necessarily come naturally to the independent farmers, but the Irish warmth and quick humor sparks connections. “We’ve had a lot to learn,” O’Grady says. “We are not tour guides; we are farmers – talkative farmers. We answer people’s questions as best we can. There’s the joke about the Kerry farmer — he’s out standing in his own field. That’s what we do.”

And small groups of people from around the world are showing up in person to stand there with him.