Chocolate isn’t an indulgence on the southern Caribbean island of Saint Lucia — it’s a way of life. From the rugged plantations where farmers harvest cacao pods to the finest restaurants where grinders join salt and pepper shakers on every table and chocolate is incorporated into nearly every item on the menu — including the hamburger — the emerald isle is focused on creating a chocolate culinary experience comparable to wine tasting in California’s famed Napa Valley.

“Cocoa is at the heart of everything we do,” says Angus Thirlwell, co-founder of Hotel Chocolat, a gourmet chocolate company based in London, England, that has invested heavily in Saint Lucia’s chocolate industry.

In 2006, Thirlwell, along with business partner Peter Harris, bought the 250-year old Rabot Estates in Saint Lucia and went to work reviving the heritage of producing cacao beans — and the cocoa and chocolate ultimately made from them — on their estate and across the rest of the 278-square-mile island.

The island’s chocolate heritage dates back to colonial times when pirates prowled the surrounding waters and the British and French battled over control of the island valued for its rich volcanic soils. In modern times, cocoa production on the island plummeted due to low world market prices and cacao trees were replaced by banana groves and vegetable crops.

Rabot’s former owners made more money selling carrots to local hotels than they could from picking cacao pods and processing the beans into cocoa and chocolate. 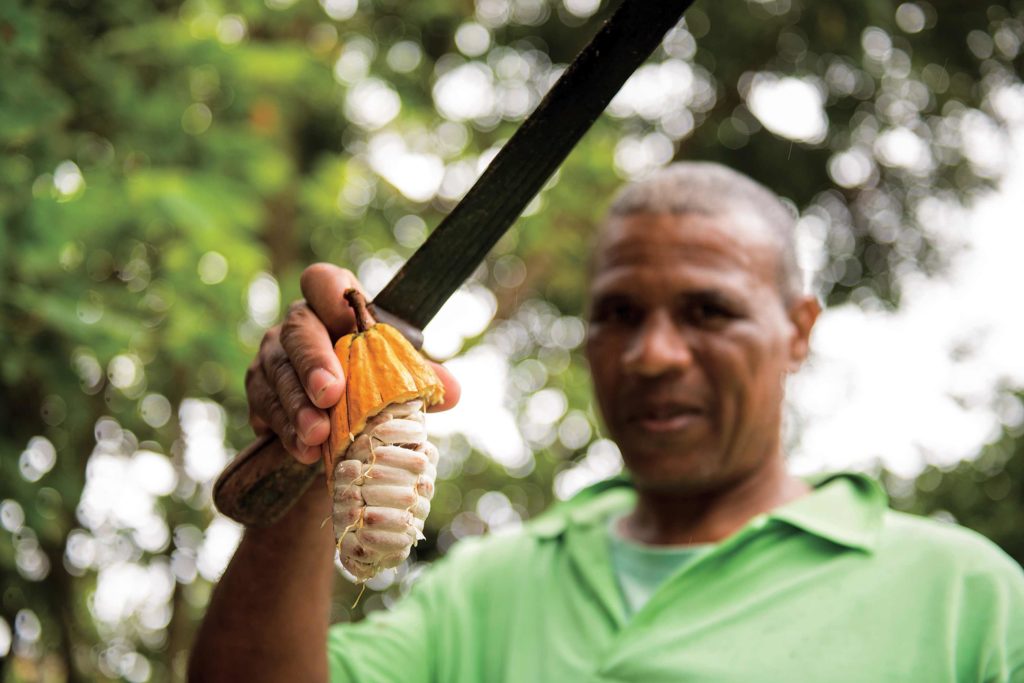 A mature cacao pod split by a machete reveals 30 to 50 beans that are encased in a milky white pulp.

Key to the reversing cocoa’s decline has been Hotel Chocolat’s Engaged Ethics Program­ — a ‘long-term, roll-up your sleeves approach’ that promises benefits beyond the Fair Trade programs used elsewhere. In recent years the program has tripled profits for the 150 island growers who participate compared to the previous world bulk price. And, payment occurs within a week instead of the six-month lag growers previously had to endure.

“The program promises to buy all of every member’s cacao output at a premium price,” says Phil Buckley, executive director of the estate and head of Hotel Chocolat’s Saint Lucia operations. “This takes away much of the risk so farmers can invest to improve their land and enhance their management abilities while feeling secure in their livelihood.”

In addition to better prices, growers also receive free technical help to improve the quality of their crop and subsidized access to top quality seedlings developed in the estate’s research center. University experts have helped identify the DNA of the island’s prized Trinitario variety­­ once nearly lost in the shuffle of bulk sales and anonymous blends. If all goes as planned, the production cycle will soon be completed with construction of a chocolate factory to help assure quality and provide jobs to further fuel the island’s economy.

“Saint Lucia has real poverty in the agricultural sector and our goal is to improve that situation by leading a renaissance of cocoa-growing on the island,” adds Buckley.

Rain forest resorts. Recognizing the appeal of fine chocolate and a luscious Caribbean island, Thirlwell built a resort hotel, restaurant, and spa (the Boucan) amid the cacao trees of the estate in 2012. However, though Hotel Chocolat (the company) is unique in creating a connection between those who enjoy fine chocolate and those who grow high quality cacao beans, they’ve not been the only ones to recognize the potential of chocolate tourism. Saint Lucia sports scores of chocolate-related businesses. On their Facebook page, the Saint Lucia Tourist Board provides links to the island’s Chocolate Trail with plantation tours, chocolate-inspired spa treatments, restaurants featuring chocolate specialities, and various chocolate hot spots. 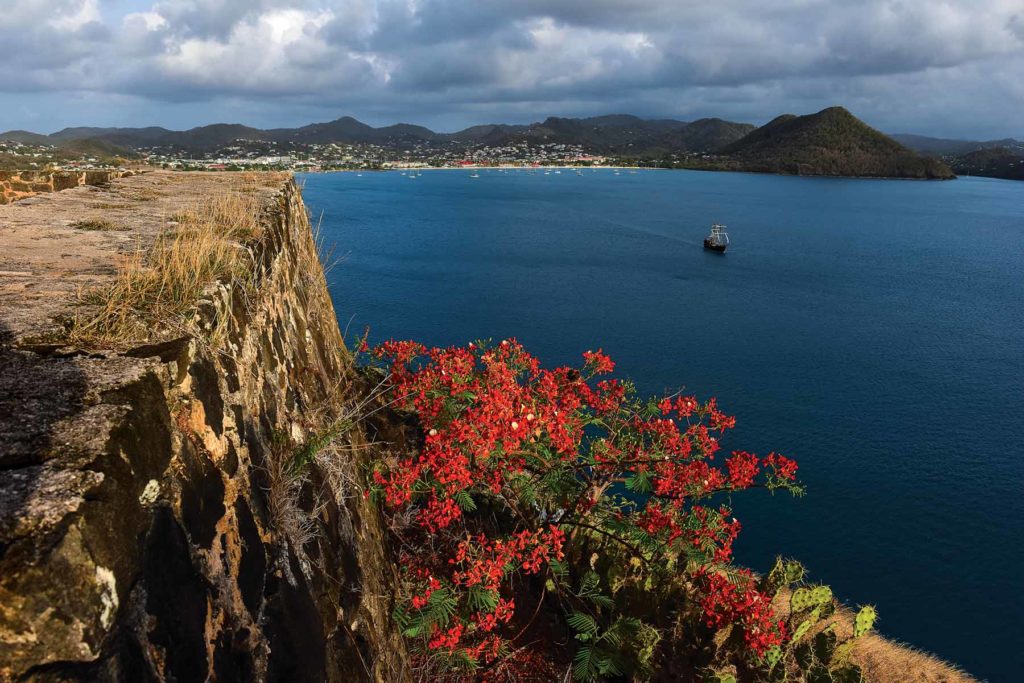 At the Boucan resort, the dinner menu is packed with unique opportunities for tastes, including roast duck with dark chocolate sauce and white chocolate mashed potatoes; jerked tuna in chocolate beer; a plate of locally-grown raw vegetables served with white chocolate horse radish; and a cocoa-powdered pork tenderloin. Cacao nibs, raw beans ground into small pieces, play a role in dishes such as cacao-infused chile and cacao ravioli.

Health benefits. Chocolate is thought to have the highest concentration of antioxidants and flavonoids of any food and the benefit these have on cardiovascular problems, memory decline, and oxidative stress are a piece of Saint Lucia’s appeal. However, these benefits are greatest in the bitter-tasting cacao, rather than the roasted cocoa or sweetened chocolate.

These health benefits have also spurred a host of chocolate spa offerings on the island with potions and lotions of all kinds. Chocolate body wraps, scrubs, massages, and facials boast of the anti-aging benefits of natural healing and rejuvenating the skin.

Chocolate terminology gets a bit confusing, and even on Saint Lucia cacao, cocoa, and even chocolate are often interchanged. Technically, the cacao bean is the source of cocoa powders, so cacao refers to the raw, purest, and most nutritional form of chocolate. When cacao beans are roasted and processed they become cocoa. Adding cocoa butter (squeezed from cacao beans), sugar, milk, and other additives turns the product into chocolate, with the taste improving but nutritional benefits declining with each step of the process.

Nature’s M&M’s. Cuthbert Monroque, agronomist at Rabot Estates, elaborates on those steps to tourists who will harvest and grind beans to eventually make their own chocolate bars. “Nature’s M&M’s,” he says, grinning widely as he hacks open a leathery cacao pod with his machete and pops one of the beans out of the thick, white paste inside.

“Just don’t bite down,” he advises of the bitter pill between his teeth. As it turns out, it takes more than just a machete to turn raw cacao beans into sweet tasting chocolate.

Monroque explains that pods grow from a tree and start as a tiny flower. The flowers develop into small green pods that mature to red or orange and grow to about half the size of a cantaloupe. Each pod contains from 30 to 50 beans, and roughly 400 beans are needed to produce a pound of chocolate. 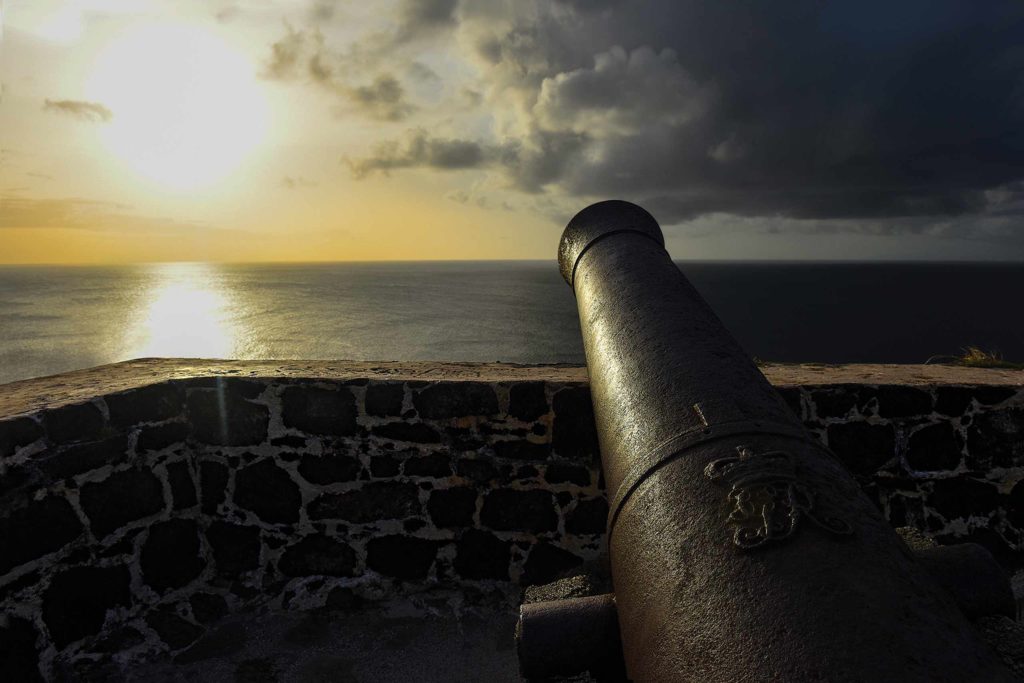 Caught in the colonial era power struggle between France and England, Saint Lucia changed hands between those two powers 14 times.

“Beans are fermented in large wooden crates topped by banana palm fronds, then dried on wide cement slabs or tables under the blazing tropical sun,” he explains.

On the tour, the finished beans are ground in a mortar and pestle and sweetened to the taste with sugar and milk. Then they are poured into a mold to create do-it-yourself chocolate bars for the visitors.

A taste for chocolate. Buckley explains that, under the Engaged Ethics program, Hotel Chocolat prefers to buy cacao beans ‘wet’, saving farmers the nearly constant two to three week chore of raking and mixing them on the drying tables. “Fermenting and drying require considerable skill and expertise, and doing it correctly can have an enormous impact on the flavor of the chocolate. By controlling production at the initial stages we can help insure the quality of our product,” he says.

“We’re also carrying out controlled research on fermenting and drying of the beans which will allow us to finesse the quality of the chocolate,” Buckley continues. “Ultimately, this will allow us to offer farmers an even higher price for their increasingly precious crop.”

Competition to produce the finest quality chocolate is largely what drives Thirlwell. In 1998, Hotel Chocolat launched a chocolate tasting club,  a community of customers who receive unique selections each month, that now numbers more than 100,000. “This method gives immediate feedback on which chocolates customers liked,” Buckley says.

Thirlwell believes future competition in super-premium chocolate will use authenticity as a weapon, and Hotel Chololat’s program with cocoa growers in Saint Lucia is an example of having a competitive edge. “The farmers aren’t just somebody on the other end of a supply chain with a subsistence lifestyle. We think they’re key to the taste of chocolate in the same way the person who grows fine grapes is an asset to wineries,” he says.

“But the cocoa-growing communities of Saint Lucia need more than just our money to make this project enduring and sustainable, and that’s why we’re transferring knowledge and providing practical assistance,” he says.