Exuberant splashing is likely to greet the ears of any guest approaching Julie Peters and Carl Edelen’s home from the months of May through August. Their son, Eli Edelen, is the source.  The boisterous youth often leaps into their backyard swimming hole while still in his school clothes —  sometimes even his shoes make the plunge.

Who can blame him? While neighboring backyards are the boring typical grass, this 7-year-old’s backyard seems like a scene plucked straight from a summer vacation memory. Mature trees provide the illusion of being in a forest despite actually being in the midst of New Haven, Connecticut, suburbia. A brick path winds through a dazzling display of wildflowers, but the big draw for this backyard is the clear inviting waters of a rock-lined pond complete with a dock. It’s a tranquil and unexpected surprise in a suburban backyard setting.

Though simple in appearance, this swimming pond is an engineering marvel that provides the natural beauty of a pond with the clean waters of a swimming pool. The watery wonder forgoes the muck of ponds and the chemicals of traditional pools while combining the fun found in both.

Zoo living. Besides his parents, Eli has Mick Hilleary and the team at Total Habitat to thank for his swimming pond. Hilleary was a zoo exhibit designer. In 1996 he designed an otter exhibit for which he had to create a clean, clear environment without the use of chemicals. When he was finished and watching the otters frolic in the pristine water, he thought, “I’d like to be swimming in there, too!”

So an idea was born. Hilleary applied his filtration knowledge from zoo and aquarium design with some advice from a retired chemist who had built a similar pond at his Tennessee cabin in the 1950s. Eventually he perfected a natural swimming pond design sure to delight children and adults alike.

The swimming ponds are a clever design merging nature and engineering for the perfect result. Once a look is settled on, Hilleary’s team digs a hole and lines it with a watertight material guaranteeing, other than evaporation, water stays put. “We want to avoid using a masonry wall, so we craft ponds to have a gradual sloping entry up to 3.5-feet deep. The biology of the pond can make for slick surfaces, so this walk-in design also serves to mimic natural lakes for ease of entry,” Hilleary explains. Once they hit the 3.5-foot mark, they create a ledge and dig down as much as 10 feet. Here they build a retaining wall of Western red cedar. 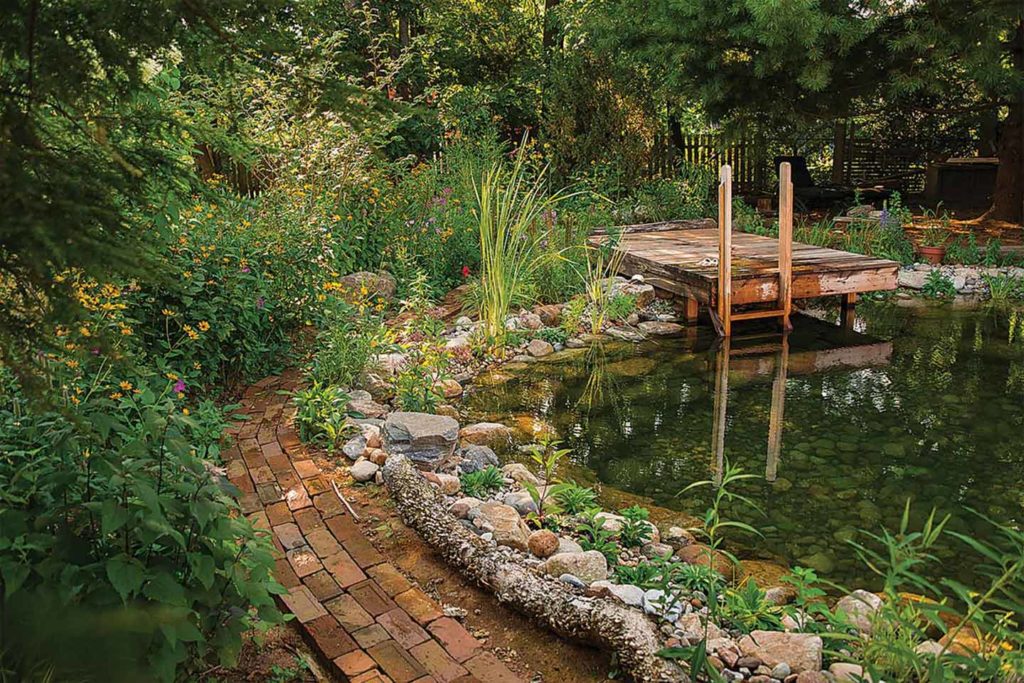 Wildflowers, a passion of Peters’, make the perfect pond accessory.

“It’s rot resistant for 30 to 50 years due in part because wood that stays wet doesn’t rot, only wood that gets wet and dries,” he explains. The wood is used to retain the pump and natural filter. Inside the wall is a large area for swimming while the outside of the wall is circled by perforated pipe topped with 9 inches of expanded shale. A pump draws water down through the shale at the bottom of the pond and is returned through a waterfall or surface jet, effectively stirring and oxygenating the water.

Expanded shale is a critical element. It’s full of little spaces, so much so it even floats. Those crevices are prime living quarters for beneficial bacteria. The pump system keeps oxygen-rich water moving through the bacteria-populated shale. “As long as they are fueled by oxygen, the bacteria will consume anything moving past them that isn’t water,” Hilleary says. A true natural, and adaptable filter.

“If you use a particular type of sunscreen, a population of bacteria would grow to exploit that nutrition source. There are trillions of varieties of bacteria and they’re very opportunistic,” Hilleary says. They prime the expanded shale with beneficial bacteria known to have great performance. “The older these pools get, the better they work. It makes sense because they are growing a rich microbiom specific to each individual environment.”

Finishing touches. Stone is the final layer, but it’s important to carefully choose materials. Hilleary avoids limestone which can dissolve and impact pH. “It can create a pH environment that promotes undesirable algae growth,” he says.

Fish, however, work just fine with the system, as Julie, Carl, and Eli learned. You can release a couple fish and soon their numbers will swell. “You don’t need to feed them, just let them forage. They’ll grow to their natural saturation point,” he advises.

That’s exactly what’s happening with Eli’s fish. Julie wasn’t initially enthralled with the idea of fish in her swimming pond, but the family fell in love with them while shopping for lily pads for the pond. They purchased four fish that quickly multiplied into more than they could possibly count. 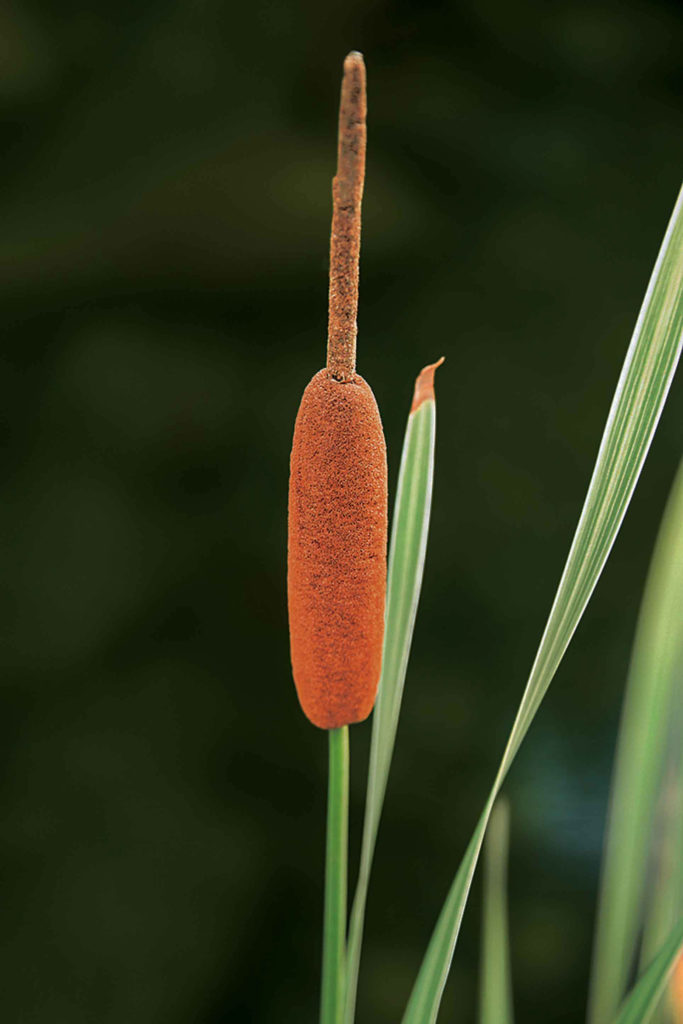 Julie is now expanding her gardening horizons to include water plants.

Julie, a child psychiatrist, has come to embrace the fish and even participates in a little fish watching. “In the evenings the fish venture into the shallow end and stick their heads up out of the water to feed, even flopping up on the rocks a bit before flipping off. I can watch them from the kitchen and the bedroom. It’s so relaxing to watch them feeding and chasing each other around,” she says.

Fish and people aren’t the only ones that enjoy the pond. It’s encouraged many other guests, too. Birds treat the pond like their own super-sized bird bath, much to Carl’s delight. “The birds love it,” he says. “They’re always out here splashing around — sparrows, cardinals, blue jays, grackles, cat birds, doves, and robins, lots of robins. We either have a huge population of robins here or they just really like to be clean because they’re in and out of the water all the time.”

He also notes the pond is a special treat when it rains. “Even the lightest drizzle disturbs the surface and puts on a mesmerizing show,” he says.

The family has watched dragonflies deposit eggs in the pond, and they have developed a fascination for the variety of water bugs that flit gracefully across the still surface. “I fell in love with the water striders, which was surprising,” Julie says. “There’s so much nature here now, I just love it. Eli spends more time outside, and now all his friends want to come here to hang out, which is just great.”

Garden challenge. Julie has long been an avid flower gardener with a penchant for wildflowers. Before they built their swimming pond, the backyard was basically one big wildflower meadow.

“We purchased the house in 2000 and I just gradually kept digging up a little more grass until it was all wildflowers,” Julie says. “I would bring my friends bouquets every time I saw them.”

Like the pond, wildflowers attracted a lot of life — birds, butterflies, bees, dragonflies, even a batch of baby rabbits made use of the area. When the pond went in, Julie had to sacrifice many of her flowers, rehoming some with neighbors and keeping as many as possible. But, the pond is providing some new gardening perks. Only a year into having the pond, Julie has already started working plants into every available nook and cranny surrounding the pond. She’s also getting to experiment with water plants such as cattails and water lilies. And then there are some truly unique benefits. “I can garden in my bathing suit if I want to,” she laughs.

The family is excited to use the pond year round. A small heater gets them in the water earlier in the spring and keeps them there later in the fall, and, with a good winter it will freeze over for a little ice skating fun. Their first winter they had to run the pump, but could turn it off the second winter. That didn’t stop Eli from his winter fun, “I got to break the ice in the shallow end,” he says gleefully.

Country fit. While Julie and Carl have created a magical backyard retreat in a city, Hilleary has installed many similar ponds on acreages throughout the country. He notes they can be more practical than traditional farm ponds. “Farm ponds silt in and have to be positioned where there’s enough watershed to support a pond,” he says. “The swimming ponds you put exactly where you want them, usually just a few steps out your back door.” 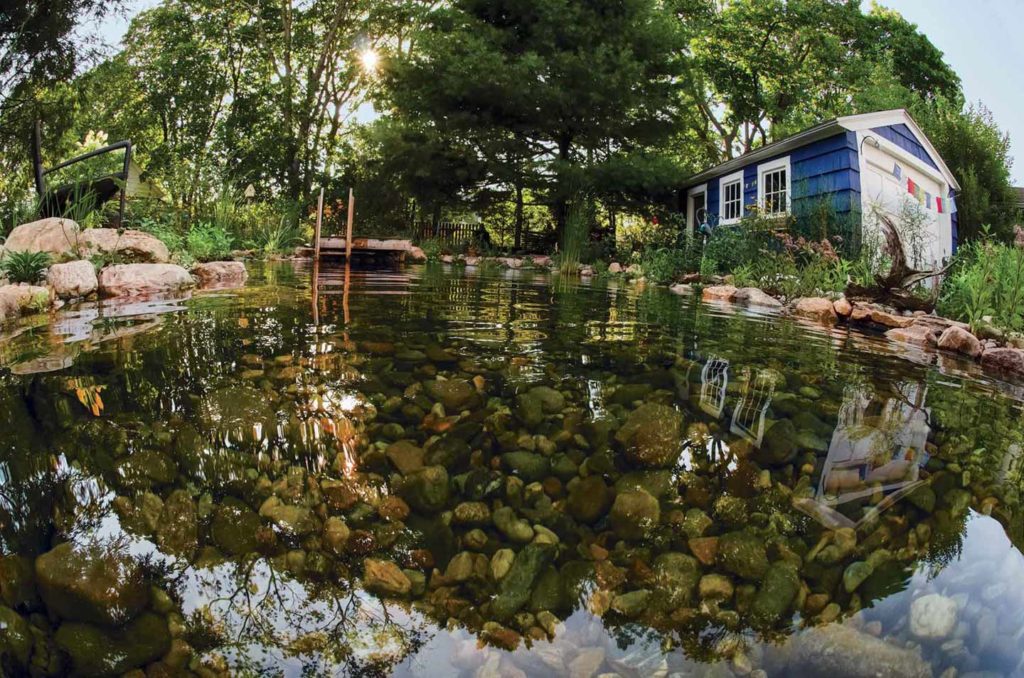 The pond features an ankle-deep shallow end and a 5-foot-deep area by the dock.

He notes most pond owners create outdoor living spaces surrounding their swimming ponds. It’s not long before pergolas, fire pits, outdoor ovens, and other amenities pop up around the soothing water.

“The water quality is so much better than a typical farm pond, and the water stays put,” he says.

Hilleary has seen some amazing transformations. One install took a trampled grassy area to a beautiful watery retreat. Situated on a hilltop, the pond featured an infinity edge for truly magical sunset viewing while taking an evening swim.

“We built a pond for a self-proclaimed workaholic, and she said it spoiled that for her because all she wanted to do was sit by the pond,” Hilleary laughs about one of his many happy customers. Once installed, ponds are very low cost and low maintenance, just a little electricity for a pump and an optional heater. There are no chemicals, no cleaning, no fuss. “It’s a naturalistic setting so where as a few leaves and twigs are debris in a classic pool, they just blend right in,” he says.

Materials run around $20,000 for a roughly 50-foot-by-50-foot pond when all is said and done. Installation costs will easily double that number. For do-it-yourself types, Hilleary offers a how-to book and consulting. Or, like one customer, he can just install one while the homeowners vacation. Julie says it’s worth it, “I find myself humming Fred Astaire’s lyrics: Heaven, I’m in heaven!”