The rich scent of leather intertwined with undertones of glue and maybe just a hint of a well-earned beer trickle out of the workshop dominating the back two-thirds of Dillon, Montana’s, Atomic 79 boot shop. Over the hum of a sewing machine and the thwack of a hammer, someone is the recipient of some good natured ribbing.

“Frankly it’s our humor that keeps our sanity,” says Dan Schwarz as he turns away from the upturned form of a boot taking shape and shoves the curved steel end of his awl into a container of wax.

As master boot makers, Dan along with his wife, Julia, and daughter, Keni Crane, can spend 16 hours or more per day, six days a week in their workshop handcrafting cowboy boots. Each pair is a work of art not only visually, but in function. Customer’s feet are measured 9 ways and the customer questioned about any sore spots or problems areas.

“We should be aware of any abnormalities in the feet so we can put relief points in the boot,” Dan explains. “When you first put on a pair of custom-made boots they should feel firm and new, but they will fit more like a boot that’s already been worn a long time. There’s nothing like it.” 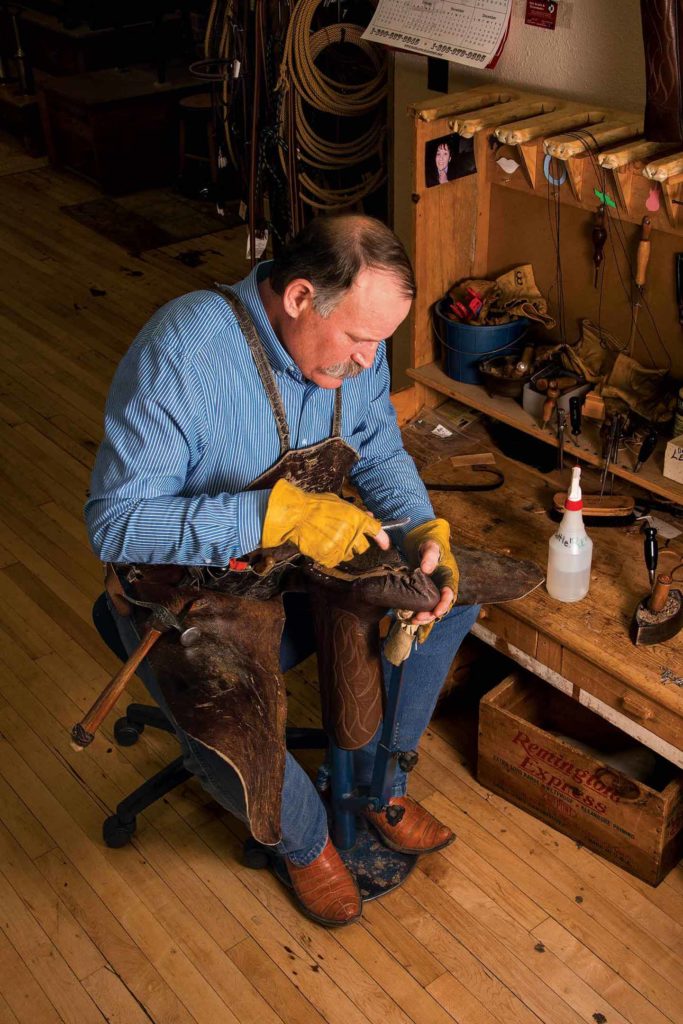 Dan uses a waxed awl to make a hole before pulling through another flax-threaded stitch.

Budding passion. Keni was the driving force behind what has become Schwarz Custom Boots. At 17 she had spent some time helping in Dan’s boot repair shop. After tearing apart and fixing so many boots, it was only natural for the mind to start questioning how the work is done in the first place.

She needed a teacher, so they sought out renowned Montana boot maker Mike Ives. It was a tough sell. The then 82-year-old Ives protested girls weren’t strong enough for the craft. At a second meeting in his shop, Keni shook his hand with her best grip and changed his mind. She spent 10 days with the master craftsman learning the trade during which time she constructed her first pair of boots.

“I asked him what he thought of my boots and he told me, ‘They look pretty good from across town,’ which by then I knew was his way of saying I didn’t do too bad after all,” Keni recalls fondly. Ives would later go on to declare Keni his best student.

Though she took detailed notes, when Keni tried to teach Dan to make a pair of boots, there were still a lot of unanswered questions. So the pair attended a two week school with second generation custom boot maker Carl Chappell. “Mike learned to make boots by watching a factory worker when he couldn’t get a pair of boots after returning from World War II, so a lot of his ideas were factory. Carl taught us the functional reasons for each part of the boot and the cosmetic portion,” Keni says. “We walked away with confidence, hung out our shingle and in 6 months we were 3 years behind in boot orders because our base price was just $425.” That price has since increased to reflect master craftsman status achieved over 15 years of hard work and dedication.

Throughout the years they’ve had good customers and those that are a little more challenging, but some really shine a light on just what it is they offer. Dan recalls one customer who insisted on picking up his boots in person despite living a considerable distance away. “He walked into the shop in flip flops and khaki shorts. We had to lend him a pair of socks,” Dan says. “He slipped on the boots and started crying the biggest crocodile tears. He had such odd feet he never dreamed he could wear boots.” A short, thick foot meant he couldn’t even get a factory made boot on. They’ve experienced similar moments with customers facing challenges such as club feet. 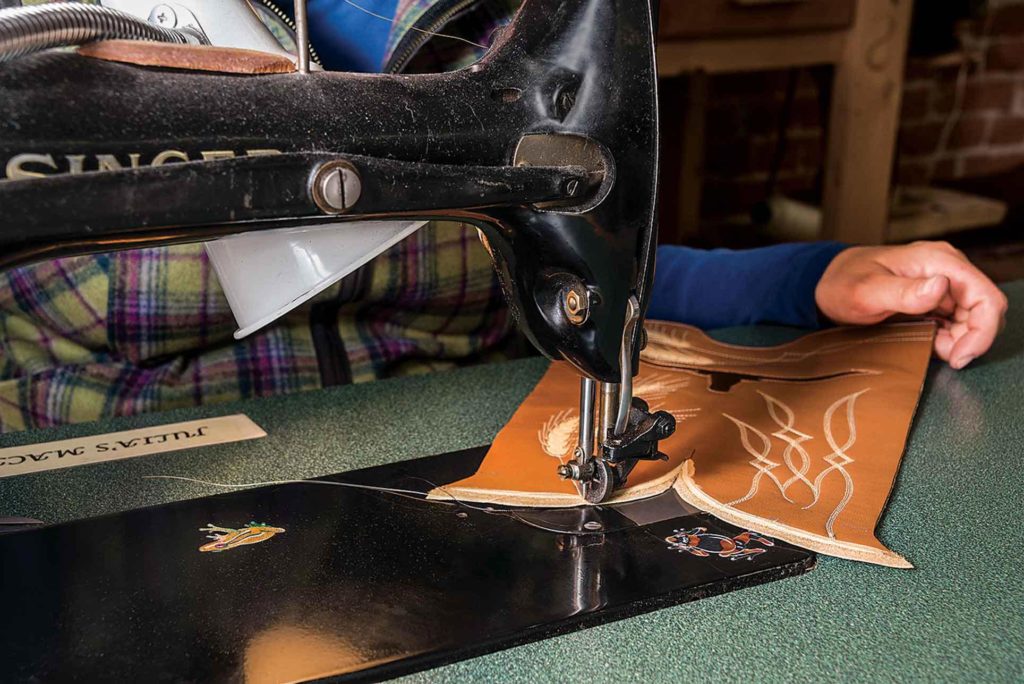 Julia sews a wheat design on a boot upper on her trusty sewing machine.

Cowboy pride is a badge these craftsmen wear with honor. When they send boots out with their name on them, you can bet they’re perfection. Part of their success is that their individual skills meld together beautifully. Factory or custom shop, the task of making a boot is split into two jobs. There are top men — women in this case — and bottom men. Julia and Keni take the tops. They work out the details of the design of boot uppers and stitch them together with form and function.

“I’m an artist but my skills were in metalsmithing,” Julia says. “But Keni had a hidden talent that really bloomed. We all work together.”

They each wield their worn tools with an ease earned by hours and years in the shop. Their pride and dedication to their craft is evident in both the beauty and wear of their tools. Used daily, those tools become far more than accoutrements of the trade to some. For example, a placard declaring “Julia’s Machine” near a beautiful matte-black Singer  sends a clear message to any would-be stitchers.

Functional art. Once foot and leg measurements are taken, Dan uses them to make a last, or custom form, of the foot. It’s the foundation around which they will build the boot. Lasts by the dozens from past customers line the shop walls.

Meanwhile, Julia and Keni take their measurements and start hand drawing out a design, noting where the tongue and other functional elements will be positioned before starting on decorative features. 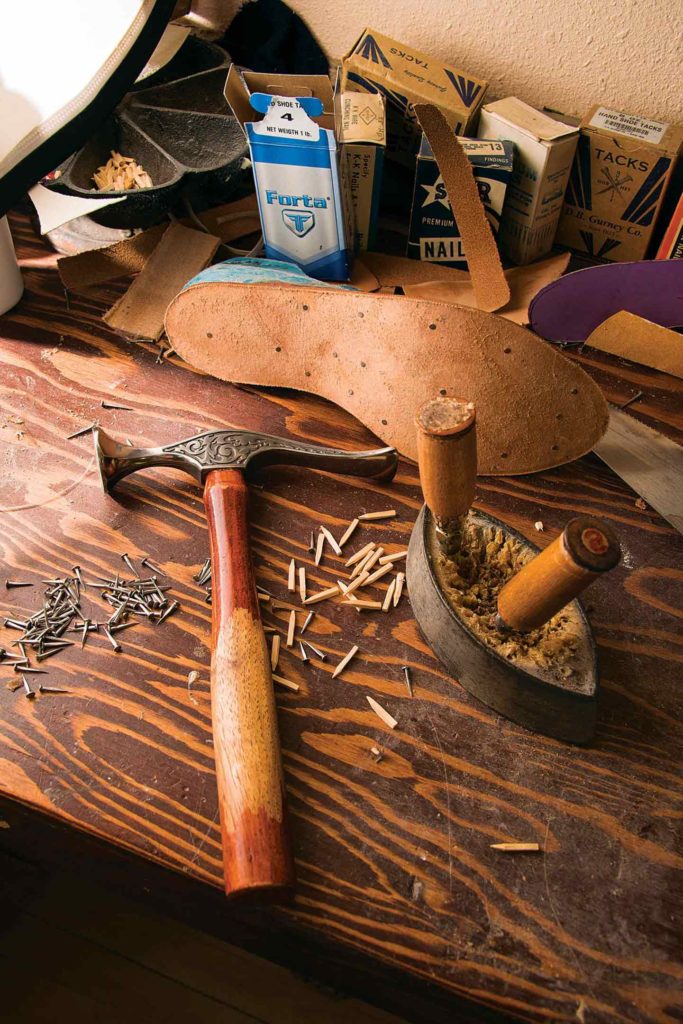 Tools of the trade litter a workbench at Schwarz Custom Boots. A hammer, pegs, and awls dipped in a beeswax-olive oil mix.

Even the eye-pleasing parts must first meet function. All stitching on the uppers is vertical, for example. “Horizontal stitching creates a stress point weakening the leather so it bends,” Dan says. “Those boots will eventually flop over when you take them off. Ours stand upright.” Another key is the toe stitch, which looks like the decorative stitching on the top of the foot. “We pull a cord through this area that acts like lacing. It needs to be
positioned correctly to keep the waist of the boot from stretching and maintaining a good firm fit,” Keni explains.

Once constructed, Dan takes the boot upper, stretches it over the last and hand stitches it to the welt, or inner sole. He drives holes into the leather with a hooked awl and then pulls through an 8- to 10-strand waxed flax line with considerable force. “This welt will never come off. It will rot away first,” he says with pride. And he’s right. Even with heavy use, Schwarz Custom Boots are still hard at work from corrals to boardrooms a decade later.