Susan Burek was well on her way to a wonderful life in the country. She had built her Victorian house — with her own two hands, plus some help from her father — a few miles west of Detroit, and on these six acres she was ready to get serious about having an herb farm. “That’s why I moved,” she says.

But the joy of country living isn’t always about what you expect. Just as often, it’s what you don’t expect. “One day a co-worker said to me, ‘My husband got some keets. Do you want some?’ recalls Burek. “I said sure….what’s a keet?”

Guinea fanatic. What indeed is a keet? Susan learned quickly when she soon took home seven of the baby birds — they are not called chicks — and set out to get acquainted with them. The keets grew to become guinea fowl, and like with so many pursuits of the country, Susan became hooked. Like many others before her, she’s now a guinea fanatic.

On her beautiful spread in the Michigan woods and fields, Susan has many birds — chickens, peacocks, ducks — more than a hundred in all. But it’s the guineas she’s most fascinated by simply because they are quirky, fascinating creatures. The birds wander constantly across Susan’s lot, stepping quickly, always anxious and more than a bit nervous, jerking their heads this way and that, always quick to keep a safe distance from humans.

Their murmuring cackle isn’t the least bit soothing, and when a stranger gets too close, the cackle becomes loud and downright irritating. But for someone living in the country, that can also be a comfort. Because of the guineas, Susan always knows when someone pulls onto her property.

“Some people like to have them on their homestead because they’re a good watch bird. When a stranger comes up, guineas can make a lot of sound,” says Susan. “There’s a wildness to them. What I really like is that guineas are not very domesticated. It’s just enough to be kept by humans.” 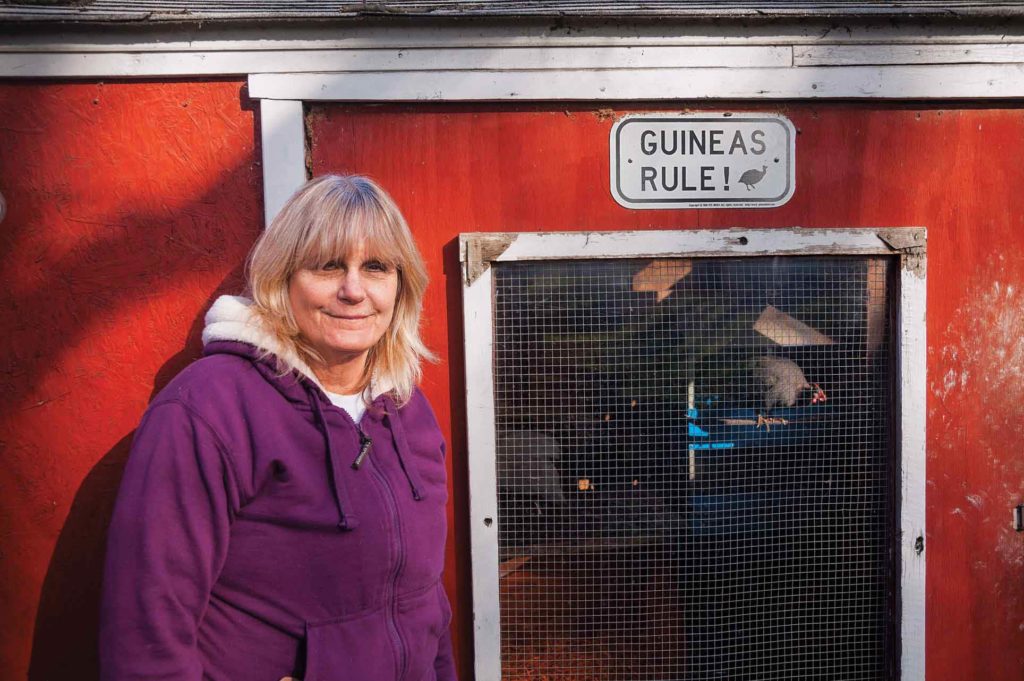 Susan Burek has many items around her
farm to show her allegiance to the guinea, a quirky, odd looking bird.

Taste for bugs. If you want a best friend, get a dog. But if you want something that eats the bugs and pests bothering you around the homestead, the guinea wins hands down. Guinea fowl are always foraging for bugs, always on the move, giving the ground a peck or two with each quick step. Ticks, slugs, flies, and crickets — all are on the main course for a guinea. The birds travel in cliques, huddling and running together when frightened. And when a group comes across a snake, they’ll gang up, easily take it on, and have a feast. For dessert, they’ll chow down on weed seeds.

The world of guinea fans might be fairly small, but Jeannette Ferguson is well known among them. Before guineas came into her life, Ferguson was a frustrated gardener. “I always raised flowers and wanted to enter them in garden contests, but I never could. The leaves were always eaten up with bugs,” she says. Then, one day at a garden club meeting, Ferguson noticed something odd in a fellow gardener’s lawn. “I kept looking out the window at these funny looking birds running all over the yard,” she recalls. Ferguson left with a few eggs, incubated them, and got started. “As time went on, my flowers started doing better,” says the southern Ohio gardener. “By the third year, I had won numerous ribbons. I gave my guineas all the credit.”

Like Burek, Ferguson became hooked and started studying this unusual species. She eventually wrote a book, “Gardening with Guineas: A step by step guide to raising guineas on a small scale.” The guineas are semi-wild, “scared to death of people,” as Ferguson puts it. But she learned the secret to making the birds calmer, something she passed along in her book. The trick, she says, is to let the keets implant with their human caretaker.

Training fowl. “It’s not hard,” says Ferguson. “It just takes some patience.” Start with the keets as soon as they hatch and begin putting your hand into their brooder, she says. Let your hand rest there, and do it long enough and often enough, and the birds eventually become comfortable with you. “It’s a long process, but once they get used to your hand, they get to know you. They’re no longer scared. It’s amazing how trained they can be.”

Burek gives Ferguson a lot of credit just for that single tip. It’s what easily lets her get her fowl inside their poultry house for the night. Otherwise, guinea can often roam and roost at night in the trees.

Burek wants her birds close so she can watch them eat her herbs. Remember, she’s an herbalist, too, and she believes guineas aren’t as dumb as many think. She believes the guineas self-medicate with her herbs. With those herbs, Burek has developed herbal products — tonics, tinctures, and sprays — that she sells to other poultry owners.

“It all just came together,” says Burek. Her herbs and guineas make a perfect fit on her little homestead, Moonlight Mile Herb Farm, something she never expected when she started. “I just started doing this and people convinced me to sell them products for their poultry. I started down one path and it led to another,” she adds. “ I get to play with my guineas. I get to play with my herbs.”