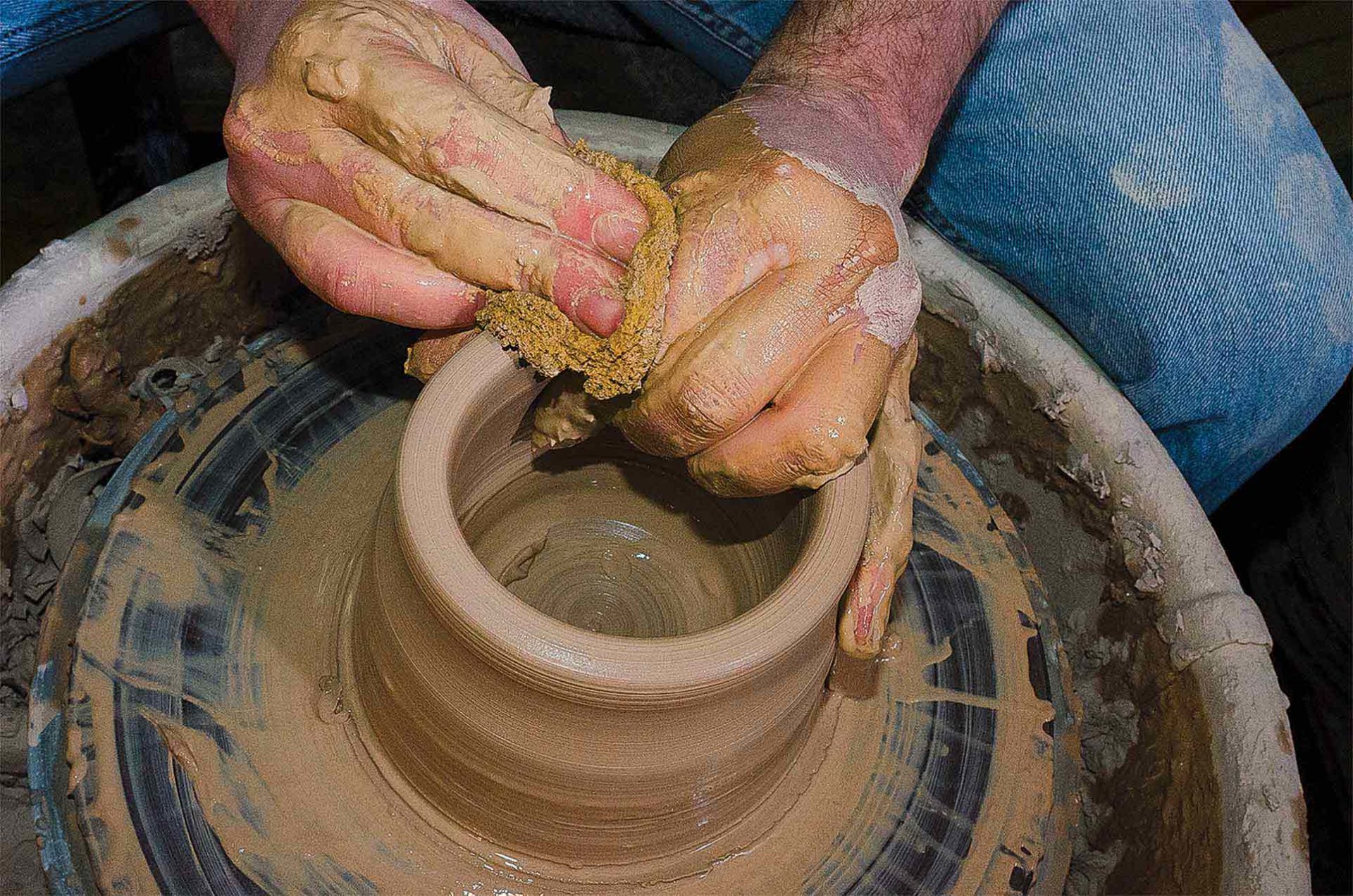 Sure, North Carolina’s Blue Ridge Mountains exist on maps but they’re more a state of mind than anything else for a lot of the people living there. Something mystical and magical there gets the creative juices stirring. Being in them makes the artistic types think, “Why not?” and “What if?” That’s why so many have moved here.

Both the beauty of the mountains and the many colleges drew folks here, and they worked out ways to stay full-time. Take potter Molly Walter, for one. She grew up in tiny Grand Ridge, Illinois, got a college degree in anthropology, and ventured to western North Carolina to teach at the Arthur Morgan School, a boarding and day school for 27 7th, 8th and 9th graders located on a pastoral 100-acre farm near Burnsville, North Carolina.

Talent abounds. “I found huge access to talent and resources in this area. There’s the Penland School of Crafts, which offers lots of programs. The John C. Campbell Folk School, which has about anything you can think of ranging from arts and crafts to cooking and music, gardening, writing and photography. Haywood Community College in Clyde has programs designed to help artists and craftspeople not only learn how to find their field, but find markets for their work, as well,” she says.

“I moved back to Illinois but then I had to come back, not just to work with these creative people but also because I was excited about this amazing community all around us here,” she says. 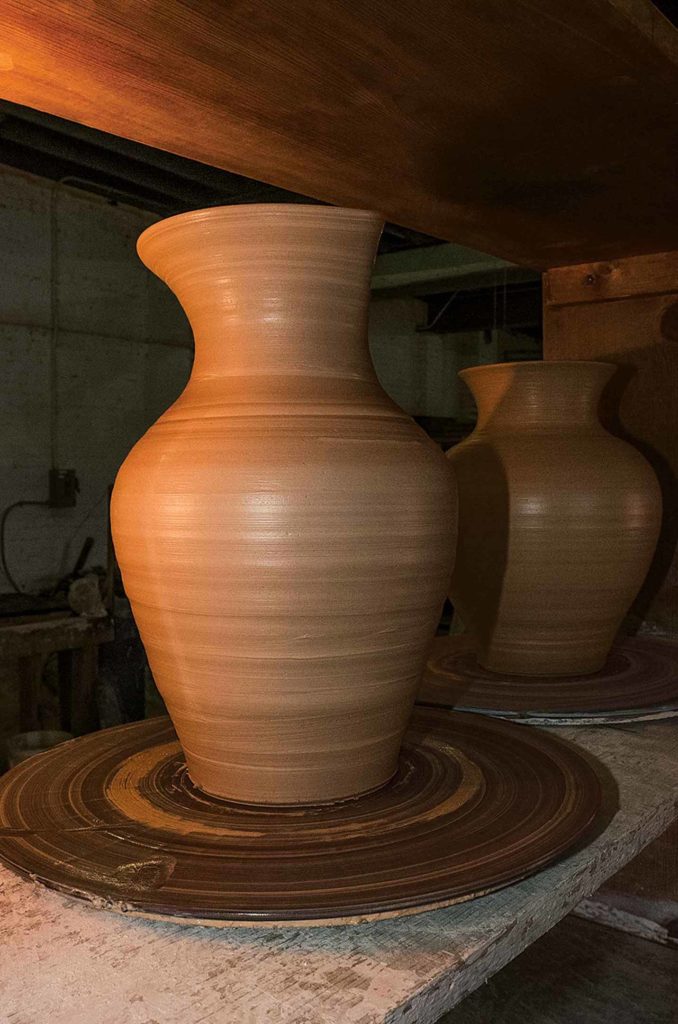 A Hamilton Williams vase on a shelf, ready for sale at his Morganton, N.C., studio.

The three successfully used a Kickstarter campaign to fund the wood-fired kiln for finishing the pottery. Batten, from Jacksonville, Florida, moved to western North Carolina with her husband and both enrolled in the horticulture program at Haywood Community College. After that, the school’s extensive arts and crafts programs intrigued her.

“I didn’t grow up in a family of artists but, being around Haywood, I realized that this is a viable way to support myself and be creative. Like a lot of the creative people here, I also do part-time jobs, but you can actually make a living doing this.”

Creative urges. People in western North Carolina have long felt that creative urge, of course. The author Thomas Wolfe, who famously wrote “Look Homeward, Angel,” grew up in Asheville. The novel caused such an uproar in town that Wolfe refused to go back for eight years. It’s perhaps no surprise that his “You Can’t Go Home Again” was published posthumously. Renowned poet and biographer Carl Sandburg lived and wrote for many years on a farm at Flat Rock. Famed short-story writer William Sydney Porter, better known by his pen name, O. Henry, is buried in Asheville’s Riverside Cemetery.

In the modern era, sculptor Jenny Mastin grew up in the coastal region of eastern North Carolina. She came to this area to work on her Masters program in art education at Appalachian State University, got a job teaching art in the public school system and has been here ever since. She now owns Jenluma Clayworks Studio in downtown Morganton.

“For a ceramic artist like me, this area is in a clay belt, so there’s a lot of good material to work with. There is a rich history of traditional crafts here. A lot of what I see happening is that young people coming here want to keep the traditional life but put a contemporary slant on it,” Mastin says.

“They’re putting a creative edge in their work. There’s an excitement about the interaction between artists here. Someone comes along with interesting ideas and we see that come to life. People come from all over the country to take courses here. They love the natural beauty of the mountains and they love the creative environment. So they stay, and they add to our communities in a very cultural way.” 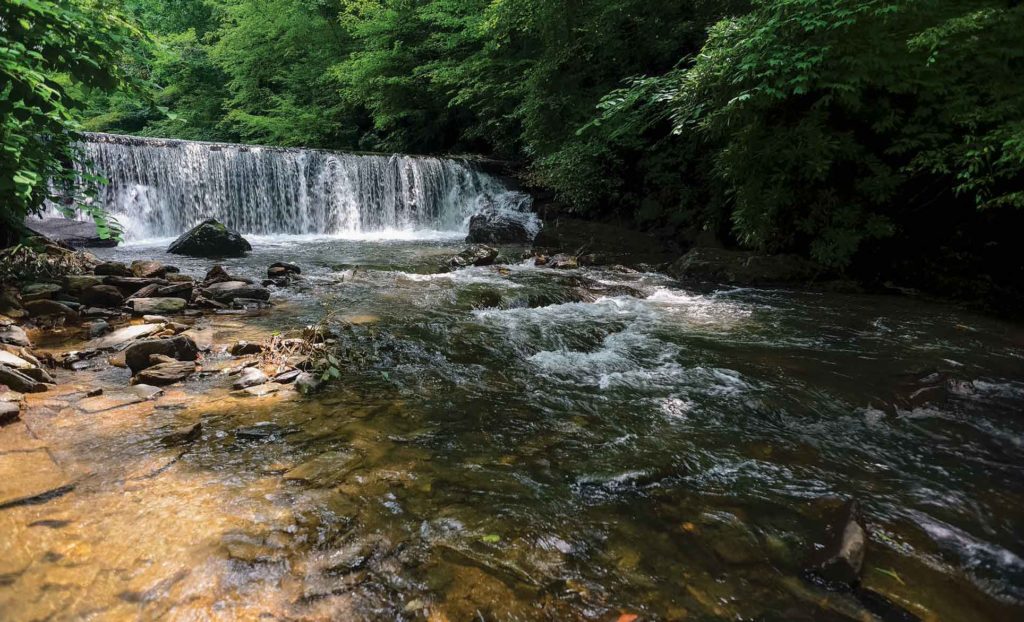 Hamilton Williams, whose pottery studio is also in downtown Morganton, spent his childhood in Kingstree, South Carolina but came to this area after studying pottery at the University of North Carolina at Greensboro. Since then, he’s been a professional potter. He enjoys being outdoors in the mountain area and often goes on hikes. The rural landscape keeps him calmer and happier, he says.

“We vacationed here when I was young. This is simply a great place to be. I prefer to live here and just visit other places,” Williams says.

Spend a night or two at the historic Balsam Mountain Inn near the Blue Ridge Parkway between Sylva and Waynesville, North Carolina,  the highest elevation railway station in the east when it was built in 1908, and  John Dunn might well be working the quaint lobby’s front desk.

Part-timer. By now, if you’ve been talking to the area’s scrappy artists, you won’t be surprised to learn he’s a painter working here for a part-time job. He’s from Shamokin, Pennsylvania, played linebacker on the football team at Kutztown University, then discovered the Asheville-area arts community.

“It is not as expensive as New York City but Asheville still has a lot of the feel of Greenwich Village. The arts community in this area has been growing steadily since I came here in 2004. Like-minded individuals like to flock together,” he says.

“I enjoy doing portraits of jazz and blues musicians, and Asheville has a vibrant music scene. I originally came to western North Carolina because I visited a friend who lived here. But once you get here and become a part of it, you can’t leave.”