Contributor Joe Link was recently honored by the American Agricultural Editors Association with one of ag journalism’s most prestigious awards: Writer of the Year, in part for his piece in the Summer 2016 issue of The Furrow, “Farming on the Half-Shell.” Joe’s award-winning story details the efforts by Chesapeake Bay watermen to keep their industry viable. Just in case you missed it, we’re once again featuring Joe’s story here…enjoy!

The August sun burns keenly across the ripples on Chesapeake Bay, but as intense as the light is, it cannot pierce the surface. The water is too dark, too murky, too muddy — a far cry from the clarity Captain John Smith found when he first sailed here in 1608.

Ted Cooney is the captain on these waters today, commanding Madhouse, a pontoon boat he built specifically for his new career: oyster farmer. In just a few years he has made every mistake possible, but he has learned much — how to take an oyster the size of a grain of sand and, in 18 months, grow it to a marketable three inches in diameter. That’s what Cooney has, thousands of them, when he pulls up metal cages from the bay bottom and returns to his dock on Maryland’s Hooper’s Island to clean, sort, and box the harvest.

The next day, a restaurant worker in Kansas City will take one of Cooney’s fresh oysters, pry open its shell, plate it in the center on a bed of crushed ice, and serve it to a diner. The diner will, according to Cooney, taste salt that is “subtle, enough to enhance, not dominate. Then the clean, firm meat yields a beautiful sweetness, like a first kiss. Memorable.” The menu will claim other oysters have their own tastes: Light. Vegetable finish. Sweet. Buttery. Plump. Mineral rich. Briney. Lettuce flavor. 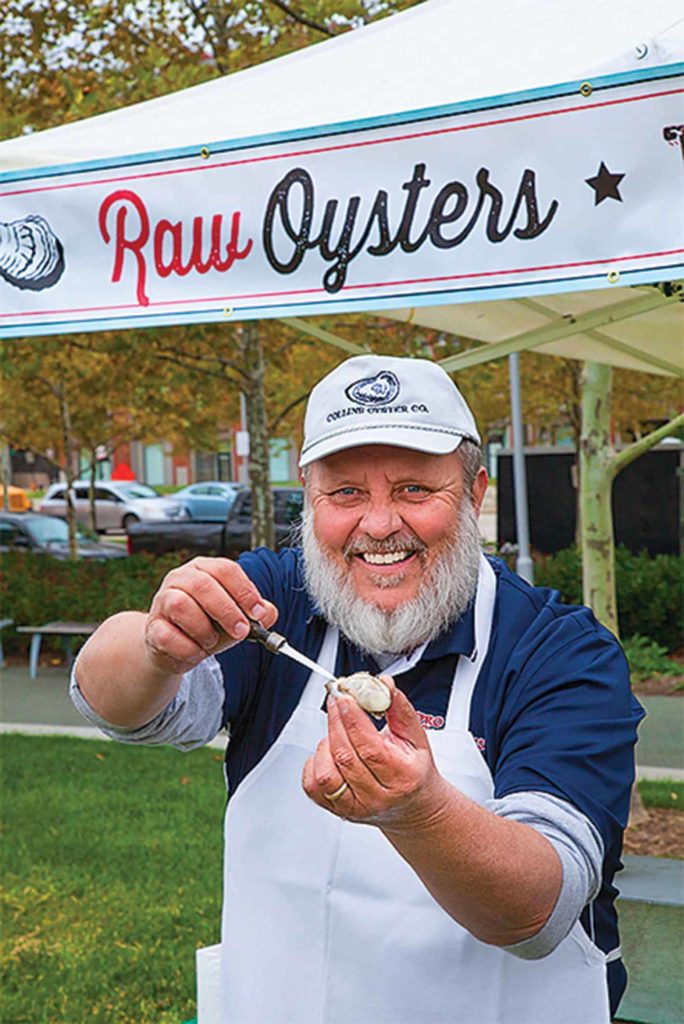 Three time national oyster shucking champion George Hastings says the only ‘proper’ way to eat an oyster on the half shell is to “kiss it off” with your lips.

Slimy mass. Those unfamiliar with raw oysters will be dumbfounded: Sitting there in its half shell is a gray, lifeless, bulbous mass, shining in its sliminess. Author Jonathan Swift had it right in the 1700s when he wrote, “It was a bold man that first ate an oyster.”

Welcome to the new trend in eating. Oyster bars are everywhere. “There seems to be one started every minute,” says Cooney, one of a growing number of oyster farmers in Maryland bringing the Chesapeake Bay oyster fishery back from the brink of extinction. The saga of this oyster here has many twists and turns, but it’s a lesson in how close humans can come to destroying a good thing. For more than 100 years they rejected the science that would ensure the oyster’s place in the bay, then finally accepted it because they had no other choice. Today, the oyster is coming back.

Oyster farming here is growing rapidly, says Don Webster. “It’s been interesting to watch it grow, but we’ve just scratched the surface,” says the University of Maryland Sea Grant Extension specialist. “Compare it with traditional agriculture, and we’re somewhere between the Amish plow and a 1950s tractor.”

To get to this place, people had to endure a brutal history. They took a bountiful natural resource, created a booming industry from it, and then harvested the oyster fishery to near extinction. Guns were fired and people died — all over this simple, saltwater shellfish.

When Captain John Smith first explored these waters more than 400 years ago, he found oysters the size of dinner plates, growing on top of each other in such great numbers that they created hazardous oyster reefs. Native Americans relied heavily on the oyster —the name Chesapeake Bay might mean “Great Shellfish Bay” — but early settlers considered it a poor man’s food. That changed in the years after the Civil War, when harvesting and canning of the oyster went into full gear, and railroads carried it across the growing country. Harvests quickly got big, rising to 14 million bushels by 1874. Then it began to steadily decline, just as scientists had predicted. Such harvesting, they warned, was unsustainable.

Tensions rose as dredgers and watermen tried to protect their oyster areas, even though these were open waters. No one owned the oysters — they were common property, free for all. And no one relied on the oyster more than the watermen, people who lived on the bay and got oysters off the bottom with large tongs — thus their name “tongers.”

Gunfire. “Dredgers would go into shallow waters, and the tongers would set up cannons and fire on them,” says historian Christine Keiner, who wrote the book “The Oyster Question.” That era, the 1870s to the 1890s, became known as the Oyster Wars of Chesapeake Bay. “People were killed over oysters. I always thought it would make a great movie.” 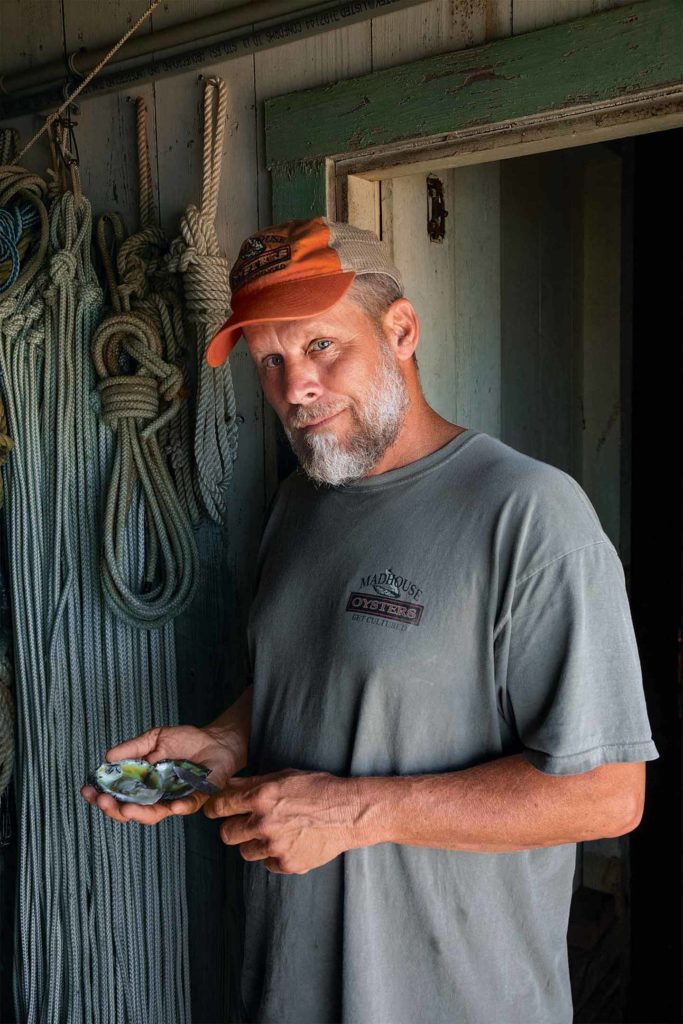 Ted Cooney has made mistakes in becoming an oyster farmer, but he has come far: his product has been chosen as the official oyster of the Preakness Stakes.

One oyster scientist had a plan. In 1884, W.K. Brooks said there was no reason oysters couldn’t be farmed. He had determined how to fertilize oyster eggs — they were fertilized in open water, he discovered, not inside the oyster body as was commonly thought — and he said Maryland should lease out the bay bottom. The returns would be incredible, he said, enough to pay for state government.

Cowboys in boats. Watermen, however, wanted nothing to do with the idea. Watermen — don’t call them fishermen — were, and still are, a proud, independent group, built of generation after generation of rugged individuals. They get oysters from the bay in the winter, crab in the summer, and striped bass, or rockfish, the rest of the year, and they are hard workers. They are, Keiner says, the natural counterpart to the cowboys of the West. And, they were politically powerful, always able to stop the state from modern farm leases.

By the 1980s, harvest was down to 2.5 to 3 million per year. Diseases reduced the population further, and by the early 2000s, the oyster harvest reached a mere 26,000 bushels. The population was in such serious trouble that Maryland seriously considered an oyster moratorium — no harvesting allowed.

For more than 100 years, politics kept oyster farming from becoming very big, but now, Maryland needed to give the idea another push. In 2009, it created sanctuaries on a quarter of the public oyster grounds and began leasing more of the bay bottom. So far it has leased nearly 6,000 acres to farmers, and no one can predict how big it will get. Maryland is adding a few hundred acres every month.

Filtering water. But restoring oysters for food is only part of the story. An oyster has the incredible ability to filter and clean 50 gallons of water a day, something much needed for the polluted waters of Chesapeake Bay. The University of Maryland’s Horn Point Oyster Hatchery produces oyster seed in the billions, but more than 75 percent of that seed goes into oyster sanctuaries. People along the shore have even created another trend by hanging mesh bags of oysters from their docks to help clean the water. It’s called oyster gardening.

Watermen still harvest wild oysters, but farming is growing quickly. Cooney started his business in 2012, and almost immediately lost 95 percent of his oysters. Still, he decided to keep going. “It’s a pretty idyllic place to work. It’s beautiful and peaceful out on the water,” he says. But Cooney had another problem. “I was totally overwhelmed with oysters. I was putting in long hours, and my back was hurting. I seriously thought I would lose my mind.”

That’s when he had two revelations. One was to call his business Madhouse Oysters. “It really was like a madhouse,” says Cooney. The second was that he couldn’t do this by himself. He needed a partner, and he found one in Scott Robinson, a fourth generation waterman. Cooney made him and his son, Scottie, partners in the business.

The partners sold half a million oysters last year. Their goal is to reach three or four million. All is going well, and they continue to learn the business — new for all three of them. Scott, despite a lifetime of harvesting oysters, had never tasted a raw one. “They convinced me to try one three years ago,” says the waterman turned farmer. “I didn’t like it. The worst part was the sliminess.” He smiles, then adds, “But I’ll eat them fried. Those are good.” m