The War of The Walls

The War of The Walls

Off the west coast of Ireland on the tiny isle of Inis Oirr, there is perennial discord about limestone walls. Some of the oldest walls are loosely piled mounds, while the younger are crafted in specific patterns. When you arrive at the island by ferry, the maze of ancient stone spreading across the land is the first thing you’ll notice: The walls form corridors, rectangles and corners, framing one-lane roads, linking cottages to vegetable fields to seaside coves, enclosing cattle, goats and the occasional horse.

“I tell you, we are stone mad!” exclaims Martin Conneely. A fourth-generation farmer who has lived on Inis Oirr his whole life, Conneely tends several tracts of land that, scattered around the island, give him access to a complement of resources —the meadows, the drier terrain, and the seaside, where he harvests seaweed used to enrich the sandy soil.

Life can seem peaceful and often quit congenial on the island, but in fact, all is not well in this little world of walls.

Conneely is keen to point out why. Traveling by van one day from his hillside cottage to his seaside fields, he remarks that a few of the Inis Oirr residents have failed miserably at their duties and let their walls go. Structures that were once trim and functional have tumbled into ruin. Some are smothered by plants gone wild.

In front of one pile of neglect, the farmer slaps his thigh in frustration. “That lazy man!” he cries. “See all those briars growing on the wall? Briar is another name for lazy!”

To Conneely, when an owner ignores his stones, he’s violating history.

The word “lazy” does not come readily to mind when imagining the many centuries worth of energy the Irish have invested in their walls — the volumes of stones and slabs their arms and backs have lifted. 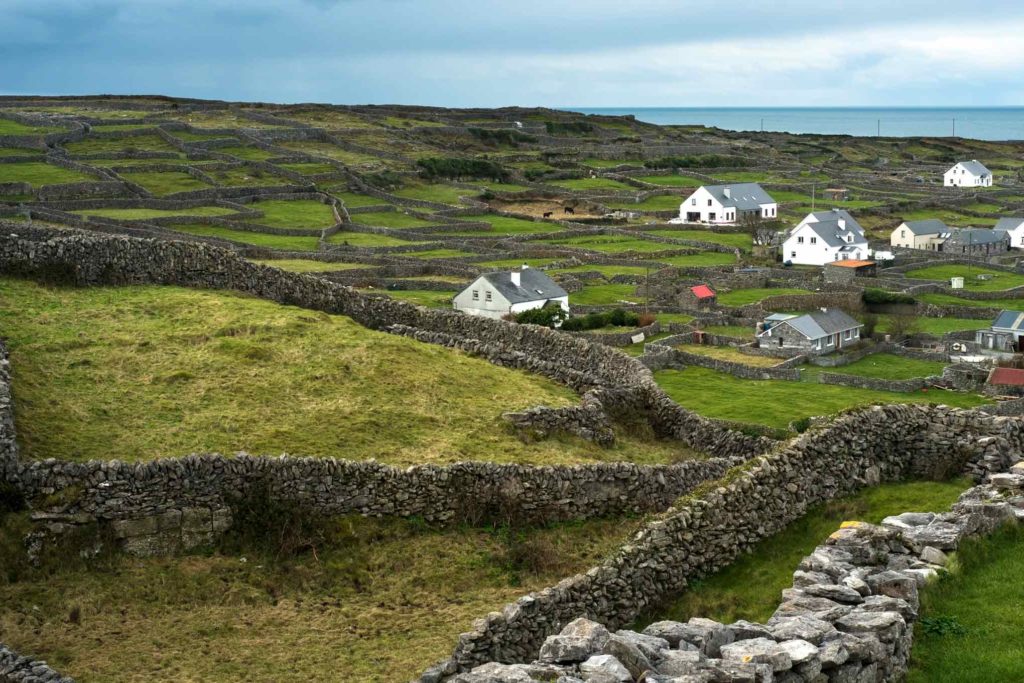 Inis Oirr (also called Inisheer) is the smallest of the Aran Islands off the west coast of Ireland near County Clare. Travelers visit to see the limestone walls, which are some of the tallest and most beautiful in Ireland.

In the old Irish language, Inis Oirr means something similar to “back island.” It’s called Inisheer in English. Located at the mouth of Galway Bay, it belongs to a group of three landforms named the Aran Islands.

The islands’ spare beauty has inspired several creative works: The writer J.M. Synge spent five summers there before composing his acclaimed play “The Playboy of the Western World;” the groundbreaking 1934 ethno-documentary “Man of Aran,” showing life on Europe’s western rim, was filmed there; and in the 1990s, one of the islands was the setting for “Craggy Island” in the rowdy television series “Father Ted,” about the lives of cranky Catholic priests.

In real life, the islands have been home to farmers and fishermen, pirates and kings. Hints at early cultures still exist, preserved in stone: Defensive ring fort foundations are partially intact from the Bronze Age, and portions of Christian monasteries survive from the first millennium A.D. Political power has been held over time by Irish chieftains, religious leaders, and absentee British landlords. Meanwhile, wall builders figured out how to stack rocks without mortar to impressive heights.

The first fieldstone walls probably appeared there 4,000 to 6,000 years ago, according to experts. The writer Tim Robinson estimated in his 2009 book “Stones of Aran: Labyrinth” that the walls of Inis Oirr total about 300 miles. If the walls of all three islands together were linked end to end, they’d stretch for some 1,200 miles. An attempted cross-country jaunt among them would likely end quickly in a mess of bloody lacerations on the fingers and knees. 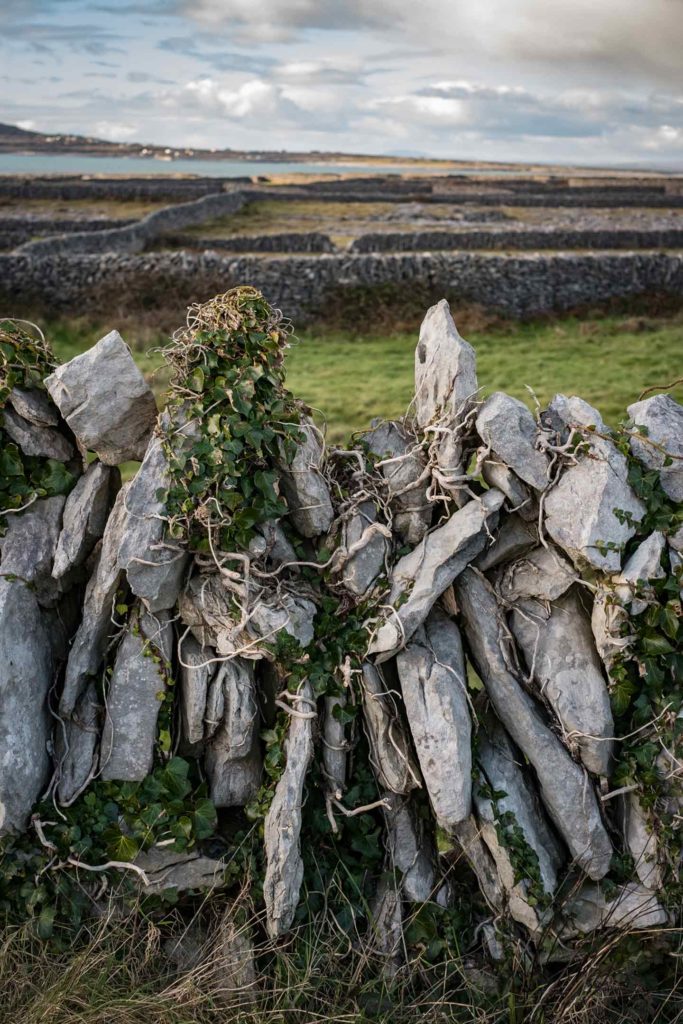 It’s hard to stay on top of maintaining the island’s limestone walls when plants and weather are constantly at work to overwhelm them.

The artist Gordon D’Arcy endured that very hardship to sketch the edifices for his 2006 book “The Burren Wall.” Inis Oirr walls, he says, “…are probably the best-known examples of drystone walling in Ireland. They are wonderfully constructed with perfect balance between the natural friction of the limestone and wind holes. Their builders were engineers without knowing it.”

They stand apart for a couple of reasons: “To begin with they are higher — up to three meters in places,” D’Arcy says. “They are mainly built from a single course of stones, and are incredibly storm-resistant.”

They were designed not to fight against the weather, but to work with it. Irregular slots allow winds to blow through the walls rather than against them, creating “chunks of stone; chips of light,” as D’Arcy writes.

They gain strength from their patterns: The rocks are stacked in ways to naturally support each other. They can be arranged big next to small, vertical next to horizontal, patchwork patterns atop rows of teeth. 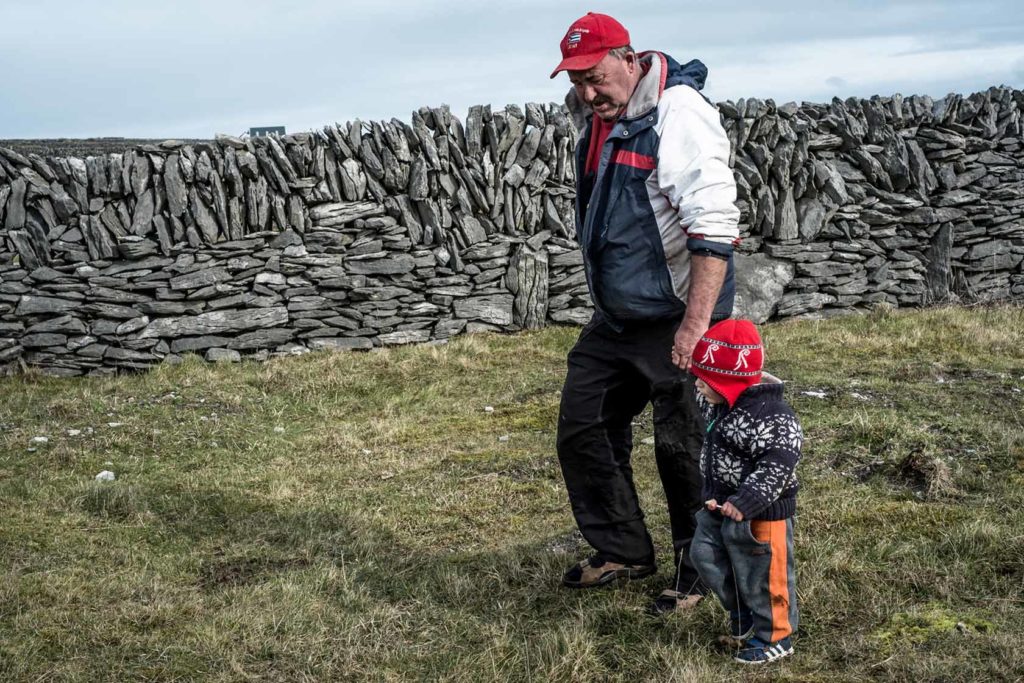 Martin Conneely walks with his grand nephew, Martin, alongside a wall he maintains on the border of his seaside field.

Conneely says different clans developed unique identifying patterns. “One of the distinctive ones is little stones on the bottom and big stones on the top,” he says. “You’d think it would be the opposite, but the ones on top keep it tight.”

While the walls are configured to keep people and pests out, they also contain obscured points of access. The builders sometimes cantilevered horizontal stepping stones between the rocks so farmers can climb over the walls without too much trouble. They formed V-shaped depressions that are low enough for humans to step over, but high enough to keep four-legged animals penned in. Some builders filled gaps between two upright slabs with small rocks that could be removed for passage.

Conneely gets a kick out of a hand-me-down technique that uses a hunk of erratic granite, left behind by the ice age, as a human-propelled hammer to crush limestone slabs, which are more brittle. On a tour of the field, he takes a chance to demonstrate. He hefts a granite boulder the size of a Dutch oven overhead. For a fraction of a second, as the rock wavers in the air, time seems to pause, giving a moment to wonder how many different hands have gripped the same boulder for the same job in years past. In an instant, Conneely smashes the boulder the earth. The limestone explodes. The Stone Age lives on.

Can Conneely guess how many miles of walls are crisscrossing his own fields? “Ah, jeez, I don’t know,” he says. “If I had $1 for every stone, I’d be a millionaire.”

A hard rock millionaire, devoted to his walls.

To Sell Or Not?