On a quiet lane in Agnone, Italy, inside a dimly lit workshop owned by the local Marinelli family, master craftsmen circle a pit that is packed with dirt. Rivulets of fiery molten bronze have just streamed from a superheated furnace into a giant clay mold that is buried in the pit. As the men wait for the bronze to cool, beams of daylight cut across the room from high windows. Dust whirls in the air, along with murmured incantations: Catholic priests are invoking good fortune for the bell, and giving thanks.

When the chanting ends, workmen begin heaving out of the pit the material that less than an hour ago they were shoveling into it. They unearth a housing of wood the size of a small shed, and as a mechanical lift eases the block up out of the hole, the craftsmen stand still, their thick hands clamped to the handles of their spades.

The block contains a heavy bell that has been at least a year in the making. Once installed in a tall church belfry, it should ring for decades if not centuries, striking in the minds of all kinds of people feelings of nostalgia, or urgency, or in some cases fear.

Those tugs of feeling will have their origins in this workshop.

The finished bell is only as successful as its bronze pour, says Ivo de Simone, an interpreter who leads small tours through the foundry. If the mold were to jiggle or shift in the dirt while the liquid bronze is racing into it, the decoration could be blemished, or the bell’s shape could be ever-so-faintly distorted, a tragedy that could make the bell’s harmonic timbre sound — to a sophisticated ear — subtly off-tune. 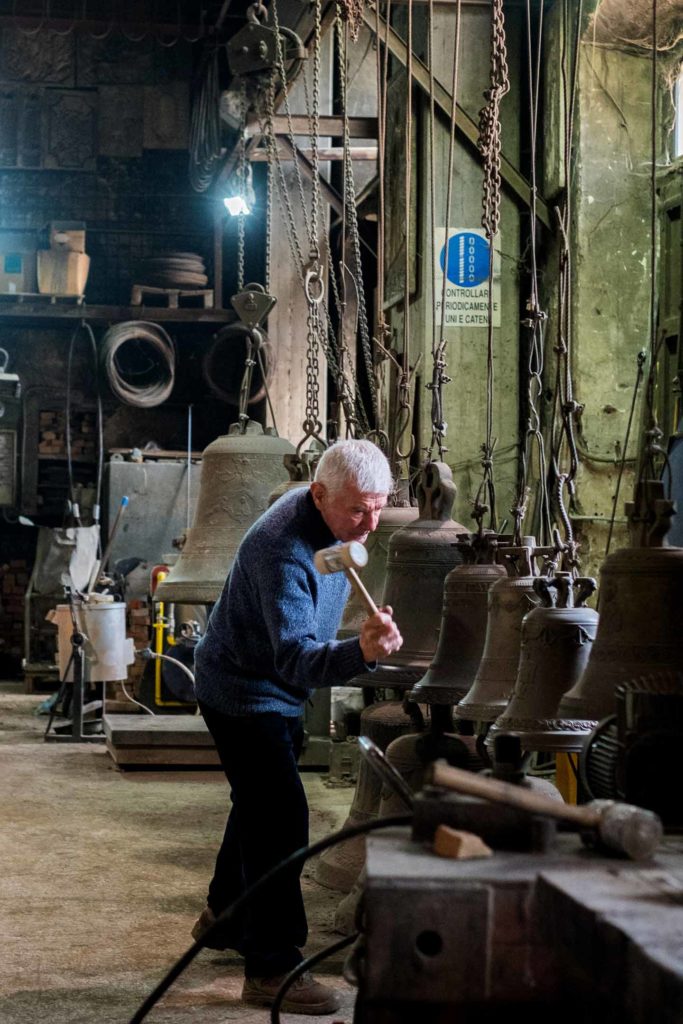 “This is a dangerous moment,” de Simone says. “To make the mold, it takes many months or a year; to make the bell, it takes two minutes.”

One of Italy’s many picturesque mediaeval villages, Agnone tops a ridge in the Molise region of the Apennine Mountains, a few hours’ drive southeast of Rome. Home to some 4,000 people, it is known among Italians for having an extraordinary number of churches, many dating to times in the Middle Ages when families living close to each other could afford to support a small community church. In one old neighborhood, the corners of three churches nearly bump against other. At one time in Agnone, there were 10 bell foundries; now there is only the Marinelli workshop.

One of the oldest companies in the world, the Marinelli Foundry began making bells in 1339 in a shop that had already been making bronze bells for at least 300 years. In the foundry’s museum hangs proof — an oblong bell that was produced there around 1000 AD. The company is now run by two Marinelli brothers, Pasquale and Armando.

Over the years some high profile places have coveted their work. Marinelli bells ring in the Tower of Pisa and in the preserved ruins of Pompeii. In 1924, the Vatican awarded it the “title of pontifical foundry.” In the year 2000, the company made a 5-ton bell that was 19 feet in circumference for the Vatican’s 2,000-year anniversary. In the mid 20th century, the foundry replaced bells that were destroyed during World War II.

The company also has made bells in observance of two sad occasions involving Americans: In 1996, Italy sent a Marinelli bell to Bodega Bay, Calif., to honor a boy who’d been shot and killed by thieves while he was in Italy on vacation with his family. After the death, the boy’s parents had donated his organs to seven recipients, and the story had raised awareness about organ donation. In 2007, the region of Molise presented a Marinelli bell to the West Virginia city of Monangah at the 100-year anniversary of a coal mine blast that killed 367 men, 87 of whom had roots in Molise.

People will want a Marinelli bell, in particular, because of the precision of design, the beauty of detail, and the alluring sound of the timbre. The exquisite production demands an array of skills — from stone masonry to carpentry to the delicate work of sculpting three-dimensional reliefs. The production technique is more than a thousand years old, and is called “lost wax.” It requires the making of a hollow mold that is sized for the bell’s musicality and tone, which is determined by the mathematical relationships between variables — thickness, diameter, etc. 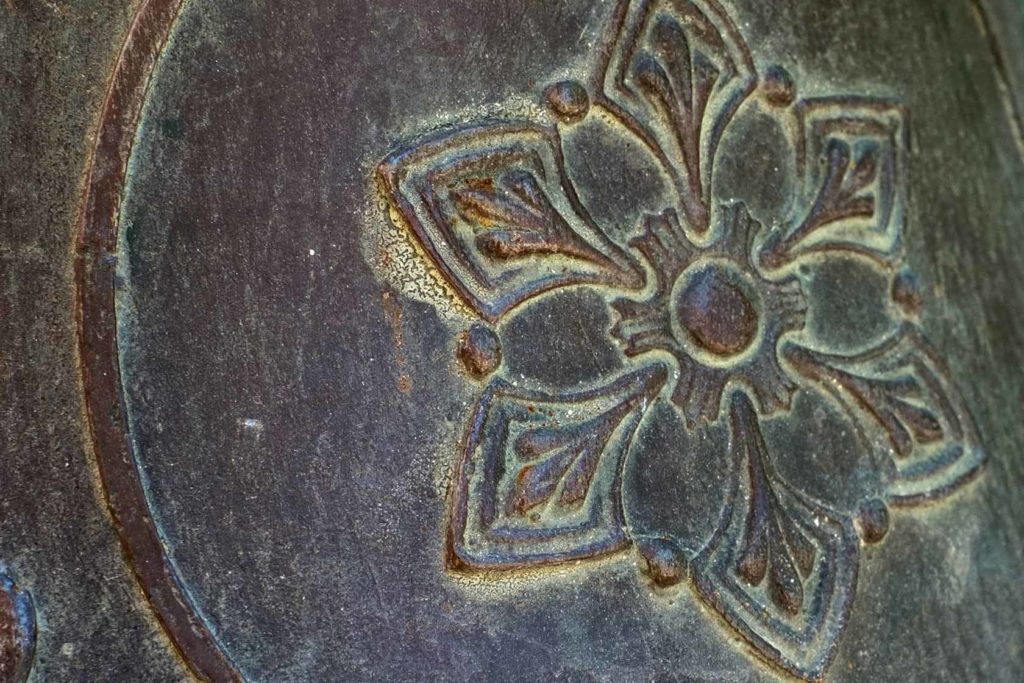 The lost wax process begins as builders assemble broken bricks and clay into a core support that is slightly smaller than the finished bell will be. The craftsmen then apply wax to the core to create the bell’s shape and thicknesses. They carve and apply wax details to this layer, creating a three dimensional surface design which might include human figures, abstract patterns, or compositions of foliage. The wax is encased in another layer of clay. After everything hardens, the wax inside is heated up and melted away to make room for the molten bronze. Carpenters then build a wooden framework around the mold.

This is where the pit comes into play. The foundry’s centerpiece is an area where bronze (an alloy of copper and tin) is melted in a furnace set at a scorching 2,200 degrees Fahrenheit. A pit lies next to the furnace, and the wood frame containing the bell is lowered into it. Workers pack dirt around the frame to hold it firmly in place.

The next moments are when some people get a little nervous, according to de Simone. “There is a lot of tension in the room,” he says. The priests start their incantations, the oven chute is opened, and hot liquid bronze pours down the channel like a fiery River Styx, to drain into the hollow place left by the melted wax. “They have to get the quantity of bronze just right,” di Simone says. After the liquid metal stops flowing, the chanting ends.

When a new bell sees its first daylight, the surface gleams like polished chrome; but it is not ready for show until artisans buff out irregularities and fine-tune intricate detail.

The bell is then shipped to its new home, which could be as far away as Indonesia, or as close as the next hilltop town. There, hoisted into its tower, it will ring out over the rooftops its sounds conceived in the sun-streaked workshop at the end of this tiny Agnone street — for ages to come.