Illinois-based artist Paul Lange has worked with The Furrow and Homestead magazines for almost 20 years, and is best-known to readers for the illustrations accompanying our “Green and Growing” column. We’ve asked Paul to pick a few of his favorite illustrations from his work with our magazines, and to share the story of how he arrived at each composition.

Dear Green & Growing: Call me an old softie, but I hate to prune trees and shrubs for fear of harming them. Am I being too squeamish?

Dear Prudish Pruner: Fear of pruning is probably as common as fear of heights, but don’t despair. What you need is a confidence builder and here it is—shrubs actually benefit from renewal pruning. It’s okay to cut individual shoots off just above ground level. On a typical flowering shrub, remove the oldest branches to open it up and allow more sunlight into the center. This kind of pruning promotes new growth at the base for lilac, deutzia, forsythia, and red-twig or golden-twig dogwoods.

Some shrubs require rejuvenation pruning by cutting all stems down to 4- to 6-inch stubs. These are spirea, honeysuckle, beauty bush, snowberry, slender deutzia and privet. Get a good book on pruning for illustrations and be bold. 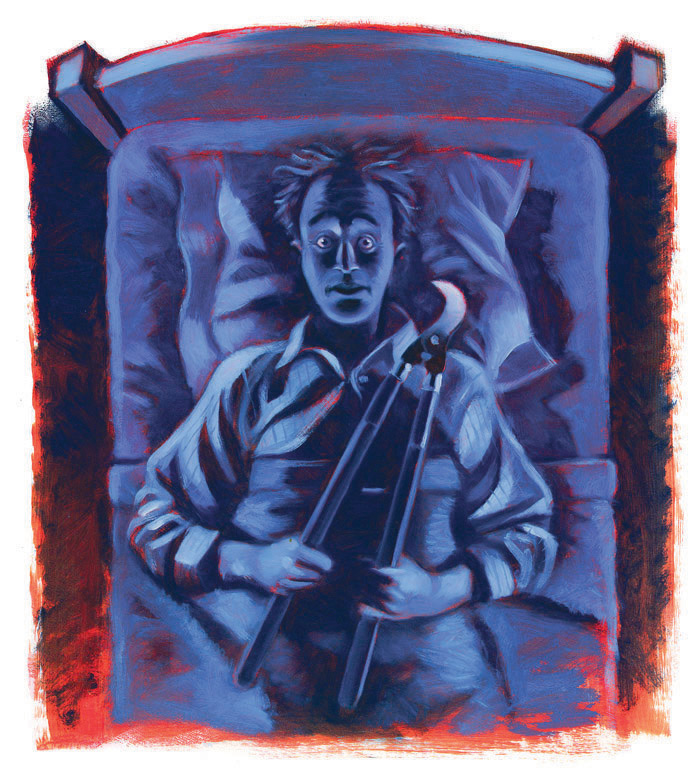 Bob’s article was a parody of a “Dear Abby” column. Parody imitates or exaggerates an existing writer’s or artist’s work for comic effect. When he framed the article with humor, he opened the door for me to do the same.

But my solution wasn’t parody. I chose to create a caricature: “someone or something that is very exaggerated in a funny or foolish way”. By taking gardening anxiety to an extreme, this portrait becomes a caricature, exaggerating the dread that this gardener feels until it became humorous.

My daughter’s boyfriend was a great model for my reference photo. I had him lie on the floor with pruning shears and a pillow while I stood on a work table over him snapping pictures. (Part of his authentic expression could have been his fear that I was going to fall on him).

I created this oil painting using a monochromatic blue color scheme to infer darkness. As Frederick Remington proved in his night paintings series, the night isn’t just black and white.

Frank James, brother and partner of outlaw Jesse, had a promising career as a farmer.