Tommy Barbee’s booming voice shouts out greetings to the early arrivals at Barbee Farms market stall. It’s Saturday morning in Davidson, North Carolina, and lines form early at Barbee’s space. People are drawn in equal measure by Tommy’s friendly personality and the produce grown on his nearby farm.

Barbee, wife Anna and son Brent set up their space with a keen eye toward maximizing every inch and pulling in customers. With a merchandiser’s flair, they make sure their space teems with a wide range of quality fruits (strawberries in spring, peaches and melons in summer) and close to 60 varieties of vegetables.

Anna and two farm employees run the scales and cash registers – the quicker they can check you out, the faster the line moves along without giving anyone the chance to wonder why they are standing in line on a Saturday morning. The Barbee’s market space is a bit akin to the world’s largest furniture retailer Ikea’s concept when it comes to traffic flow, just on a much smaller level. Step inside and before you know it you’re moving with the crowd past every available item. The only way out is to continue through the entire space until you’re ready to make your purchases. No one is complaining though. They chat with neighbors and fill their shopping baskets as they move along. 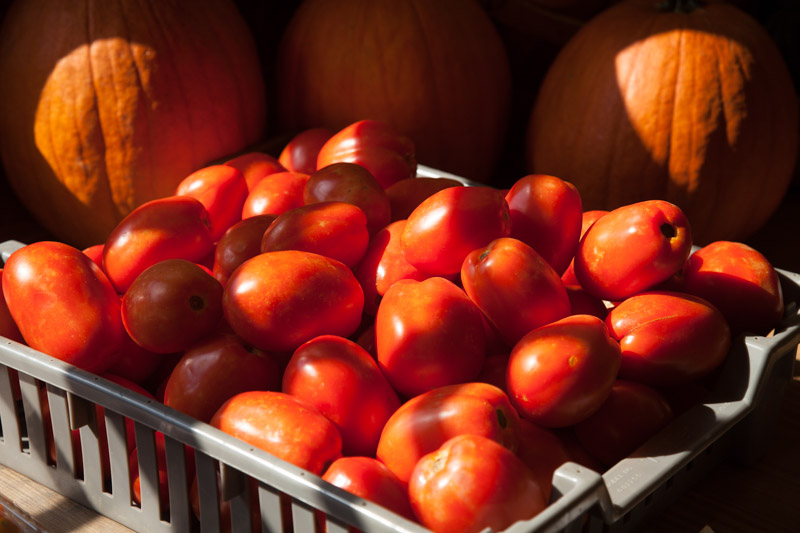 Tommy stands at the edge or weaves among the line, his piercing blue eyes scanning the space. Somehow he manages to direct two to four employees in an efficient choreography of keeping the space stocked and humming while he takes time for one of his most important roles: talking with customers.

Tommy is a natural. This man likes to talk. Even though he’s busy he somehow manages to keep a conversation going without making the customer feel slighted. Saturday after Saturday of friendly banter and hearty laughs with customers ended up being far more important than Tommy ever dreamed. It helped save his farm.

Barbee Farms of Concord, North Carolina, nearly hugs Interstate 85, a major artery connecting the Charlotte region to Atlanta, four hours to the southwest, and to Richmond, Virginia, four hours to the northeast. It’s a corridor that has seen explosive growth in recent years, particularly the stretch where Barbee Farms is located. So it wasn’t surprising to the Barbees to learn of an I-85 road-widening project. They didn’t give it a second thought.

“We felt like the interstate being right there was a plus for us because it made us accessible,” explains Tommy. With his farm sitting about a quarter to a half mile away, he believed it wouldn’t be touched by the nearby construction.

That is, until he learned through a public notice released by the North Carolina Department of Transportation (NCDOT) that the interstate road-widening project included an access road that would split his farm in half, a death knell known as eminent domain, if he refused to reach a settlement. Such actions are often fraught with angst, heartache, vitriol, and injustice, magnified by news coverage of high-profile cases. Often years-long battles with soaring attorney’s fees are part of the mix.

It seemed that Barbee Farms, surrounded by encroaching housing developments and now facing what amounted to a government takeover of a critical part of their acreage, would soon succumb to being a statistic. According to the American Farmland Trust, every minute of every day the United States loses about an acre of farmland. 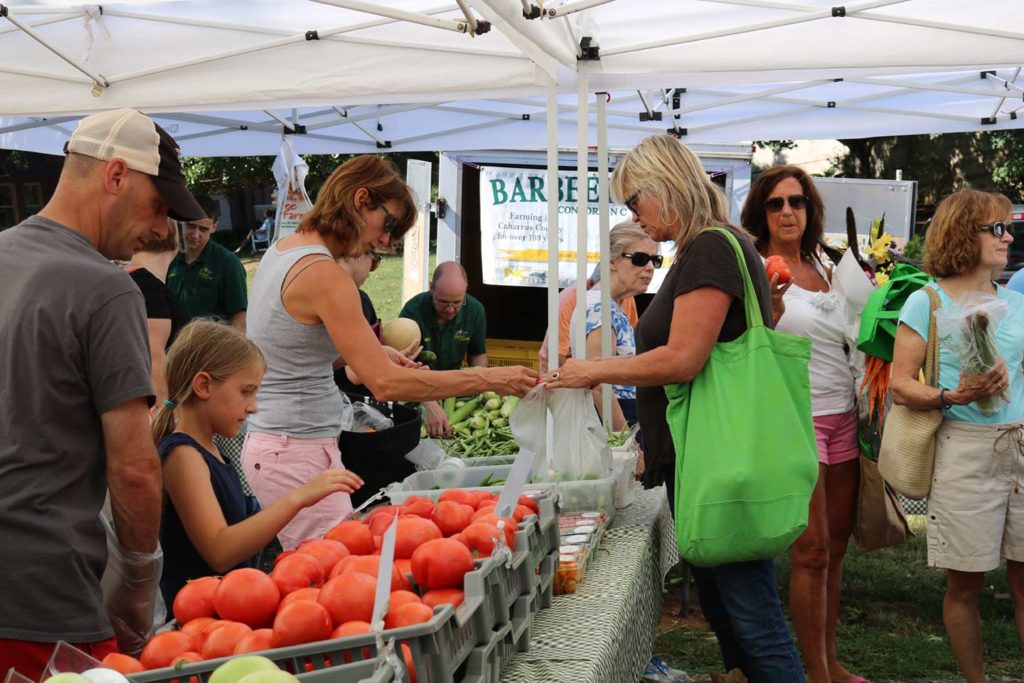 Public outcry helped save Barbee Farms from the threat of eminent domain.

“We’re done,” was Tommy’s initial thought. This Century Farm, home to this fifth and sixth generation father-son team, holds the blood, sweat, and tears of generations before them. To them, these 70 acres are sacred ground. The news of the proposed plan was devastating.

How, he wondered, could his family operate when the proposed plan split the farm in half, separating the operation area from the main production area? With cars whizzing by as if they were on the NASCAR circuit at the nearby Charlotte Motor Speedway, it would be unthinkable to cross the road with a tractor or on foot. “We would have to cross that road 50 times per day,” he says. “It was undoable. We simply would not survive.”

While the impending plan cut through the Barbee’s hearts, it struck a nerve with their customers.

For a period of several months, Saturday morning market chats with Tommy centered on how the DOT plan would affect the farm. Brent shared the news with gleaners from the Society of St. Andrew, a faith-based, hunger relief nonprofit that collected unpicked food each week from his farm fields to deliver to low-income neighborhoods in Charlotte and surrounding areas.

But there wasn’t just talk. Customers and gleaners sensed the urgency and moved into action. The local foods movement had grown legs and it wasn’t about to stand by and see a favorite farm family’s land taken without a fight. With its large network, the Society of St. Andrew initiated an old-fashioned letter writing campaign, this one on steroids, thanks to e-mail.

When a public hearing was announced, Marilyn Marks, the gleaning coordinator, sent out e-mails to all volunteers with the message, “Help! One of our farmers needs help!”

Since 2009, Barbee Farms had welcomed gleaners onto their land, donating thousands of pounds of produce each year to those in need. Marks says volunteers had gotten to know the Barbees, and they turned out in force to support them.

“Urban people care an awful lot about farms,” says Marks, noting how important it is to an urban area like Charlotte to keep its farms. Jean Siers, also a gleaning coordinator, says that for many youths, Barbee Farms is their only chance to get on a farm to see where their food comes from and how a farm works. As a result of what Siers calls “a generosity of spirit” on the part of the Barbees, many came to their rescue.

At the public hearing, gleaners and farmers market customers packed the Northwest Cabarrus High School auditorium to line up for their turn to extol the importance of this farm, one of the oldest farms in the Charlotte metropolitan area.

Speaker after speaker spoke in support of saving the farm.

“We knew about the farm” says Wilson Stroud, project development engineer with the NCDOT, “but I have to admit that I didn’t know how important the farm was to the community.” He acknowledges that the NCDOT receives comments regarding most freeway work but “this was unusual.” Close to 150 people attended the public hearing and 24 spoke. The NCDOT received more than 400 written comments about the project which affected several businesses, with 332 specifically in support of Barbee Farms.

Nearly 15 NCDOT representatives from agency sections such as right of way, public involvement and traffic noise were stationed throughout the auditorium. They listened, gathered information, took notes, and then went back to their headquarters in Raleigh, three hours away. Before driving away, Stroud made a comment in passing to Tommy about the tremendous support for his farm. For the first time in months, Tommy allowed himself to feel a flicker of hope. 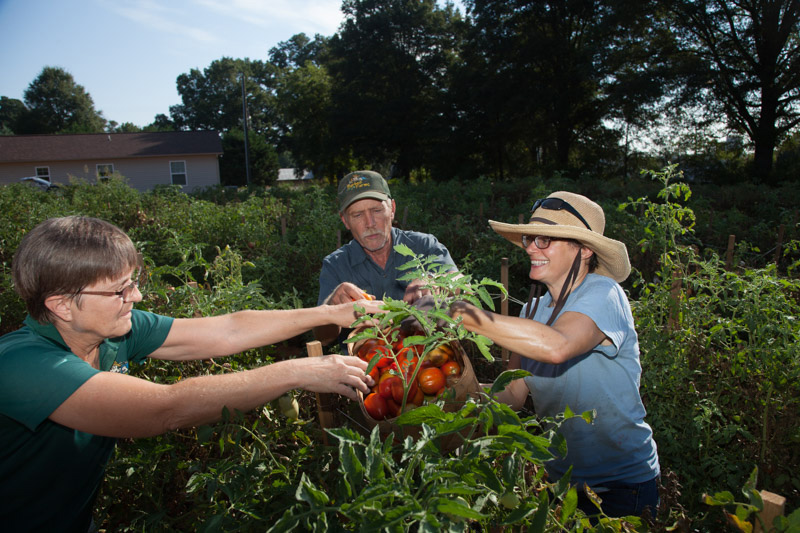 “In all honesty, they helped save our farm,” Tommy Barbee says of his customers.

Because the farm is part of a Voluntary Agricultural District within its county, the NCDOT was required to work with the agricultural advisory board, whose role is to help protect farmland. The NCDOT held another public hearing in cooperation with the agricultural board to collect additional input. It turned out to be another round of concerns about the plan, says Stroud. “People cared about this farm. That was very clear to us.”

In the NCDOT’s internal follow-up meeting, Stroud says the key question was, “What response do we need based on what we heard?”

“We ended up changing our decision,” he says. “We decided to go with an alternative.”

Stroud called Tommy Barbee to let him know the change in plans. The expansion road would be reconfigured and while it would take some Barbee Farm acreage it would not cut through the heart of his farm. Tommy says relief washed over him.

With the years of environmental assessments, public hearings, and expansion road construction behind them, the Barbees and their farm are thriving. The family has welcomed a seventh generation, Brent’s and wife Dana’s son Cody. Under Brent’s leadership, Barbee Farms has grown from a few farmers markets and CSAs to their produce now being sold in 14 Harris Teeter and Lowes Food grocery stores, large chains in the region whose customers demand local produce.

Brent handles operations at the farm and welcomes gleaners on a weekly basis. “It’s the right thing to do,” he stresses. “There are way too many hungry people out there.” While he and his Dad both, as youngsters, grew melons and sweet corn for spending money, and in the process honed customer relations skills, Brent is the first since the third generation to make a living on the farm. The cadre of gleaners, the Davidson Farmers Market, and their farm store are ways the Barbees maintain relationships with people who are more than customers or volunteers. They are friends.

On a recent Saturday, when asked about the road project, Tommy pauses a moment to look at the line of customers. “In all honesty, they helped save our farm.”

A look at some of our favorite shots from The Furrow and Homestead magazines.