Maybe it’s the old cowboy movies, with the steam locomotives chugging their way through desert and pulling a new era into the wild West. Or the elegance of the golden age of rail travel, with bon vivants draped in jewels on the Orient Express or nipping at cocktails and conversation with Nick and Nora Charles of the 1930s Thin Man detective classics. There’s just something about trains that brings out the little kid and the inner sophisticate in so many people.

Though eclipsed by superhighways and relatively cheap air travel over the past few decades, rail still stitches North America’s communities together. More than 30 million people ride Amtrak annually, and another 3.8 million rode Canada’s Via Rail service in 2015. But to really get the inner child’s heart beating and the closet sophisticate’s jewelry glittering, there’s nothing like a private railcar.

Presidents and kings. For a century, private rail travel was the domain of presidents and kings, high-powered executives and movie stars. In a way, it’s never lost its exclusivity. Maybe it’s even more exclusive than ever. While airline passengers scramble for a few extra inches of legroom, private railcar passengers stretch out on cushy observatory lounge chairs, curl up on vintage couches, or wander around the car to check the view out the other side as the landscape rolls by at 70 miles per hour.

About 400 privately owned railcars are certified to run on Amtrak, which allows their owners to link to existing trains — a $5 to $7 million part of the carrier’s Charters and Special Moves business. 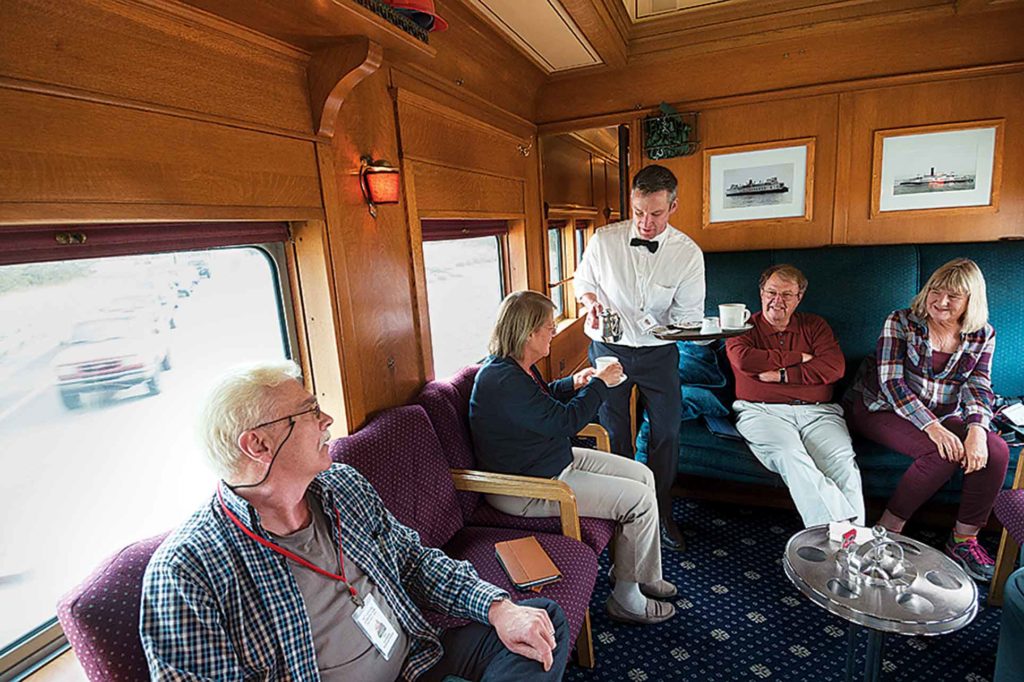 John Kirchanski (left) and guests aboard the Redwood Empire enjoy a moment of 1923-style luxury.

The oldest one, a Pullman car called the Federal (like boats, railcars have names), was built in 1911. Presidents Taft and Wilson rode the Federal while they were in office, notes Dave Luca, who now owns the car with his wife, Janet Dittmer.

“They didn’t have Air Force One,” Luca laughs. “There wasn’t a good highway system. If you wanted to get around, this was the way to go.”

Rail fantasy. Luca says his interest in trains was stoked when his parents gave him a Lionel train set at the age of six. “It grew from there,” he says.

He and Dittmer are the third private owners of the Federal, and brought the 87-ton car up to Amtrak specs — overhauls of the electrical system, undercarriage and wheels, brakes, and windows to meet modern standards for safety and comfort.

“It was our goal not to alter the fabric of the car,” Luca says. “But people are not going to cook on a coal-burning stove. We have an electric range, air conditioning, and holding tanks for waste.”

Railcar owners network among themselves and with a small handful of craftsmen across the country who specialize in restoring “private varnish” —as the railroad old-timers dubbed private cars — to locate vital spare parts for their big projects.

“You don’t just go out and buy a bolster at Lowe’s,” jokes Borden Black, referring to a massive steel undercarriage element. Black, who owns the Dearing with her husband, Nelson McGahee, serves as executive director of the American Association of Private Rail Car Owners (AAPRCO).

“It’s a real brotherhood of people who are trying to keep these running,” Black points out.

Convention train. About 200 members of that brotherhood (and sisterhood) gathered in Spokane, Washington, in September for AAPRCO’s annual convention. Most arrived on the special convention train, which linked 21 private railcars in Denver for a breathtaking ride across historic western routes.

The conference agenda covered the wide range of topics that capture the hearts of private railcar owners: a talk on local railroad history, presentations on the latest fees and regulations governing private railcars, a dialogue with Amtrak executives, safety talks, pointers on maintenance and restoration, and cocktail parties held in each railcar. 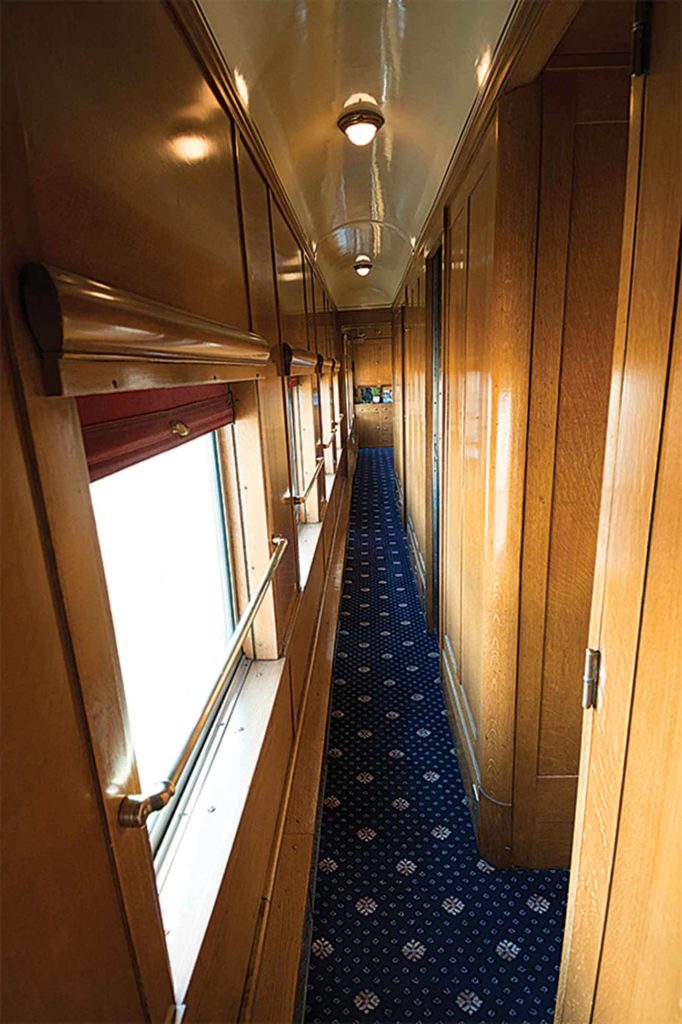 The cars were as unique as their owners, ranging from faithfully restored Beaux Arts or Deco interiors to thoroughly modern revamps.

David Hoffman and his wife, Marilyn, own two cars on the AAPRCO train — Northern Dreams and Northern Sky. Taking inspiration from cruise ships and classic touring trains, they outfitted a 1955 dome observation car and a ’50s sleeper into a pair of matching companion cars.

The Hoffmans started in 1992 with a complete reimagining of the dome observation car.

“You really have to know how you’re going to use the car,” says David Hoffman, who says the railcar designer he worked with suggested four bedrooms as an optimum size for a charter car. Since the dome provides stellar views, they could dedicate the rear to a lounge rather than a platform.

“There’s just one back platform on a train, and with a dome, I really don’t need it,” he notes.

For $7,800 per day, four couples can charter Northern Sky for a first-class ride, enjoying meals under the dome prepared by the onboard chef. Adding the sleeper, the Hoffmans also organize excursions to the Kentucky Derby and other destinations.

“It’s kind of like going on a nice cruise,” Hoffman says. “We’ve met so many nice people and traveled the country by rail. Time just flies by.” 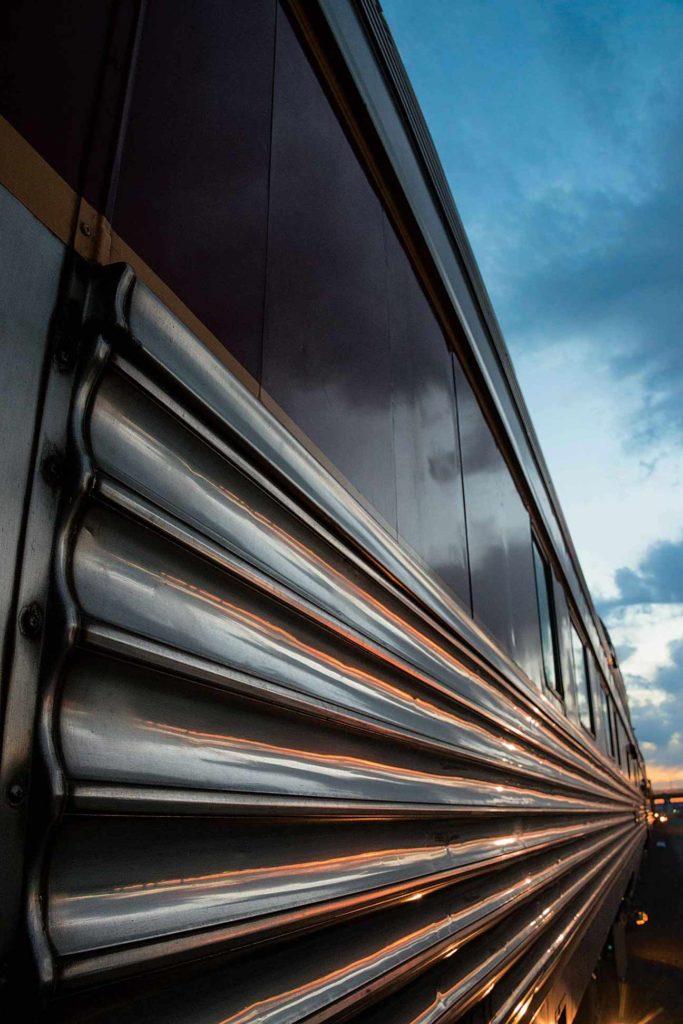 For generations, private railcars have been called “private varnish.”

Big investment. Private rail has never been cheap  —  in 1939, a car like the Federal leased for $79 to $105 per day, which was about a month’s salary for the average worker. A trip today costs car owners $2.88 per mile in Amtrak fees, plus $4.46 per mile if they have to add an extra locomotive. Then there are switching fees, monthly storage fees, annual inspections, and maintenance. And that’s after you’ve actually bought the railcar.

Arranging an excursion takes weeks of coordinating with Amtrak and organizing logistics. There are certainly easier ways to travel. But there may
be no mode more rewarding  —  or elegant.

“Some people have their beach house or their cabin in the woods,” says Black. “Mine just moves!”