There’s something almost magical about the skillful way the four young snowmobilers from St. John’s, Newfoundland and Labrador (NL) carve new pathways through the fresh, deep, powdery snow in Gros Morne National Park on the island’s west coast. Standing upright lets them use their body weight for leverage to pull the machine over onto one side to guide it through graceful loops and turns. They make it looks easy. It’s not.

Coyley Endicott must have the patience of a saint. While the others are playing in the snow, the long-time guide and owner of Frontier Cottages, in Wiltondale, NL, is good-naturedly helping me push my snowmobile out of the chest deep snow. It must be at least the tenth time he’s done it this afternoon. He’s used to guiding riders with all skill levels

ndicott is living the sledhead’s dream. He has been able to convert his boyhood passion for snowmobiling into a lifelong career. For more than thirty years he’s made his livelihood by showing visiting snowmobilers the natural wonders of his backyard, Canada’s Gros Morne National Park. It certainly helps that four of Sledworthy Magazine’s top ten bucket list destinations for sledding in the region are just an easy ride away.

“I’ve been snowmobiling for more than 40 years now,” Endicott says. “I love the freedom of just being able to jump on my sled and go feel the wind blowing in my face. Guiding is just a bonus that lets me get paid to do something I love.”

Gros Morne (French for large mountain standing alone) is a beautiful spot to live in, Endicott says. The park was designated as a UNESCO world heritage site because of the park’s Tablelands. These flat-topped, barren mountains were thought to once be part of the earth’s mantel but were pushed up from the depths by a tectonic plate activity millions of years ago.

Park permits. It’s the only national park in Canada that permits snowmobiling. The provincial and federal government negotiated an agreement that allowed for the continuation of traditional activities like snowmobiling within designated areas when the park was first formed. Riders need a park permit and have to remain in predetermined corridors, but the incredible combination of ocean and mountain scenery, plus the opportunity to play in deep powder snow, more than compensates for any minor inconveniences that sledding within park boundaries might entail. It’s also one of the best ways to view the park’s most famous feature, the spectacular Western Brook Pond. 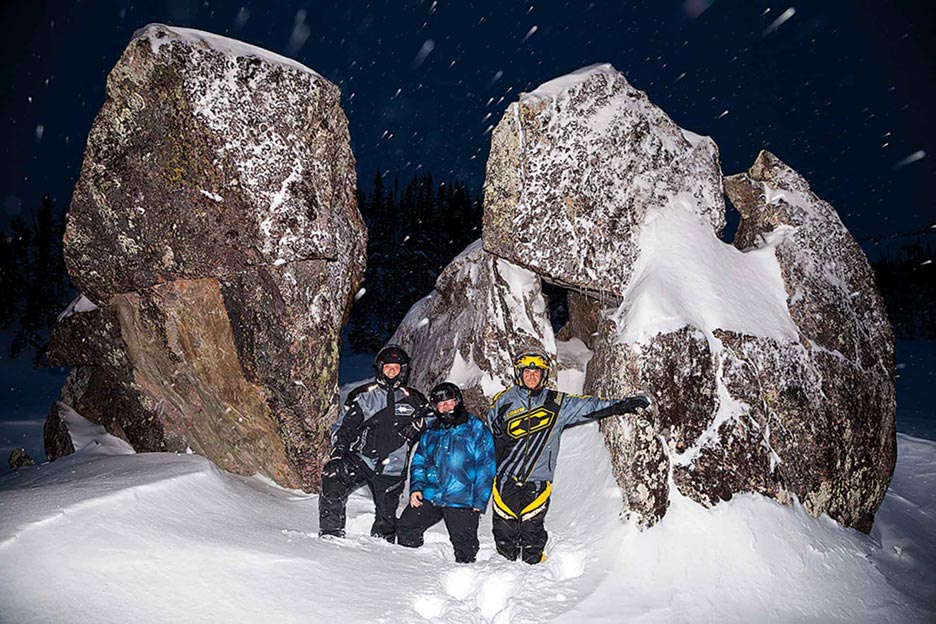 Sledders stop to pose for a picture at Titanic Rock.

“Western Brook Pond is 16 kilometers long and about one kilometer wide,” Endicott says. “It’s 600 feet deep with billion-year-old cliffs rising 2,500 feet on either side. The pond has some of the purest water on earth. It’s a beautiful spot.”

Usually when people think of backcountry snowmobiling they think of the mountains of British Columbia, Montana, Wyoming, or Colorado. But the province of Newfoundland and Labrador on Canada’s east coast has some of the best sledding terrain on the continent. You can explore forested wilderness, ride through the most northern extension of the Appalachian mountain range, take a trek along cliffs overlooking the ocean or cruise along glacier-carved fjords. The provincial tourism department touts there are more than 5,000 kilometers of groomed trails and an abundance of backcountry and mountain riding snowmobiling opportunities that rival what’s available in the Rockies.

Always gets snow. “Gros Morne National Park is 1,850 square kilometers so it’s a pretty big place. It’s in the snow shadow of the Gulf of Saint Lawrence so we have snow when no one else in Newfoundland does,” Endicott says (the park receives 251.1 inches of snow annually). “Some people who come here are novices who have never snowmobiled before. Others are experts who are doing things I would never try to do.”

Stephan Guay, an avid hill climber from Levis, Quebec, usually goes to Revelstoke, British Columbia, to pursue his passion for backcountry snowmobiling. Then one of his salesmen, Rick Foster, from Badger, NL, convinced him that he needed to come check out sledding in Gros Morne National Park in February, 2016. 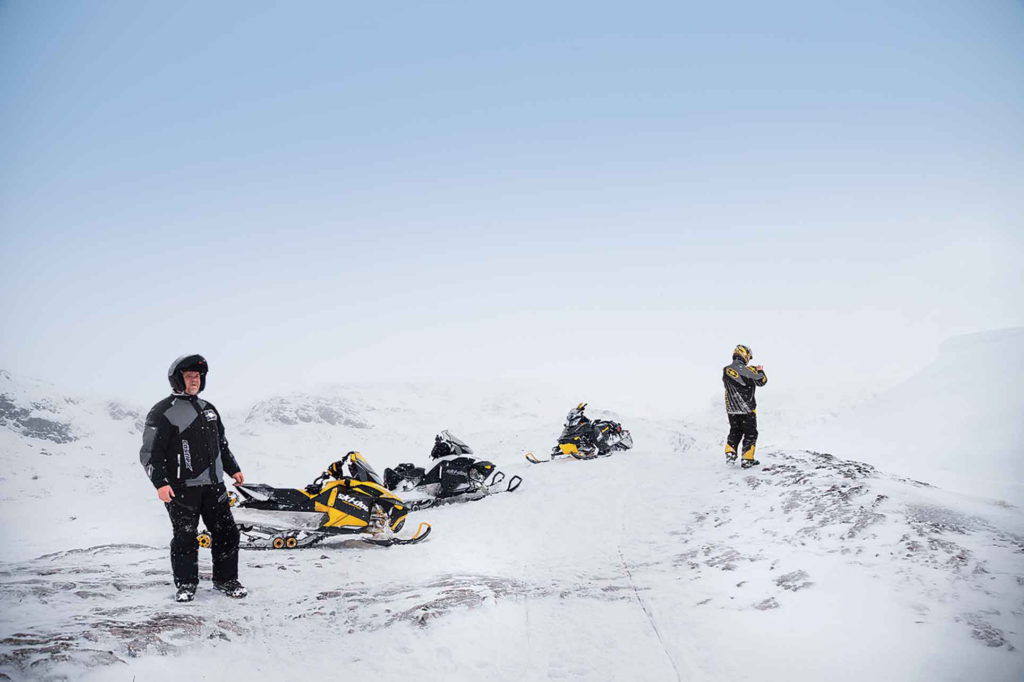 “Sledding in Gros Morne is a different experience than what you get in the Rockies,” Guay says. “But the snow is deep and the view is amazing. The hills of course aren’t as big as the ones you climb in the west, but both will give you an adrenaline rush.”

Guay says that sledders will notice that the snow is a lot different in Gros Morne too. It’s much wetter and heavier than what you’ll find on the slopes in western Canada. Temperatures tend to be a little warmer since the park borders the ocean.

“There are all kinds of little bowls to play around in, hills to climb and ledges to jump off of,” Endicott says. “It’s just like Christmas morning for a lot of guys. They can’t wait to come out and get a bit of air, have a lot of fun and just go mad.”

Most of the snowmobilers in Gros Morne Park come from elsewhere in Newfoundland, Endicott says. But more sledders from away, as non-islanders are called, are discovering it all the time. The entrance to the park is a short half-hour drive from the regional airport at Deer Lake.

Helmet and clothes. “You don’t need to bring your snowmobile,” Endicott says. “Just call ahead and we’ll arrange to have a rental machine here waiting for you. The only things you need to bring with you are your helmet and a suit of clothes.”

If you are going to bring your own sled to Newfoundland, Endicott urges you to make sure it has a sea level kit installed before you come. Most mountain sleds are designed to be operated at 5,000 feet. If you try to operate them at sea level you will run the risk of burning out your motor.