“I’d say you’re lucky,” says Nick Korstad as he pulls his boat into the marina in Fall River, Massachusetts, while autumn winds stir up whitecaps on the Taunton River. “You’re going to get to do something very few people have done — spend the night in a lighthouse in gale-force winds.”

We talk through the details of getting the lighthouse set for the night and how I might have to disembark the fiberglass boat in the windstorm. It involves me jumping onto a steel ladder and scrambling up the 13-foot-high foundation, and Korstad flinging my bag after me and pulling away before the current dashes his boat against the concrete.

“People think being a lighthouse keeper is all sunny days and bright skies,” he yells over the sound of the wind and the roar of his outboard engine. “But it was really all about the storms.”

Signs of the lighthouse’s worst night are increasingly apparent as we approach the light in the middle of the mile-wide river — the 50-foot-tall structure lists to the northeast. Back in 1938, a hurricane pushed a tidal wave 22 miles upriver that knocked the lighthouse off its foundation.

The Coast Guard poured another concrete pad around the compromised one two years later. As it turns out, Korstad skillfully eases his boat alongside the ladder and ties up. That allows him to climb up and show me around one of the most unusual guest accommodations in New England. (The wind howls all night — just perfect for the setting.)

Childhood dream. Korstad’s hospitality career started with a global hotel chain, where he steadily worked his way up the management ladder. At the age of 24, he bought his first lighthouse in a government surplus sale and fulfilled a childhood dream.

“I always wanted to be a lighthouse keeper,” he says. “I figured I’d have to create the job for myself.”

With profits from the sale of that first lighthouse, Korstad bought the Borden Flats light in 2011 with a sealed bid of $56,000. He pried his way into his new property with a crowbar and began clearing off ankle-deep seagull droppings with a snow shovel. 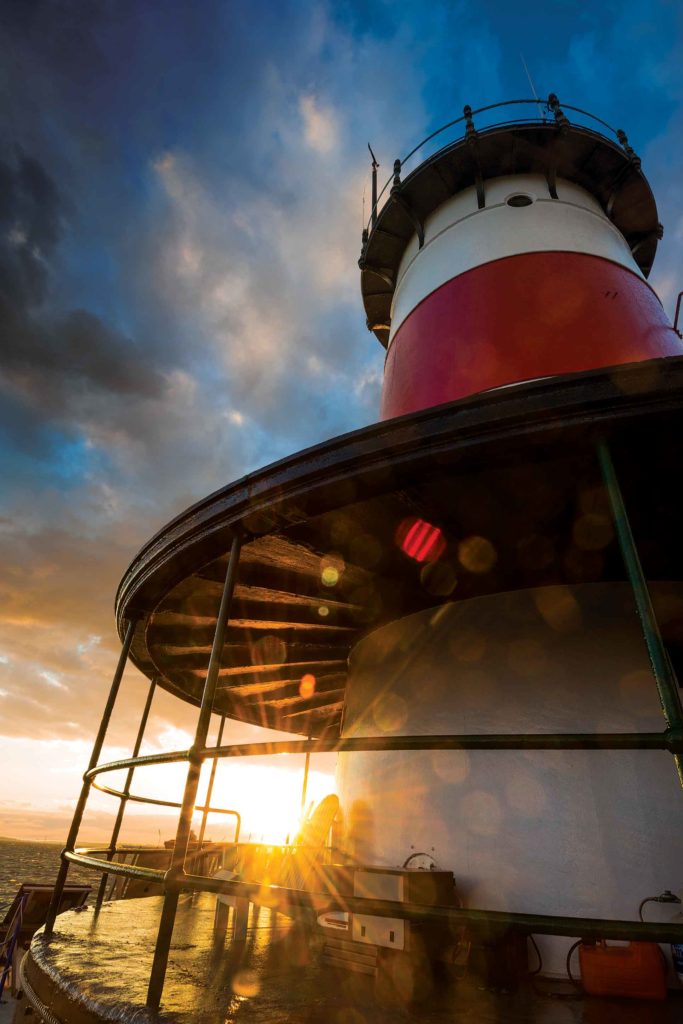 The Borden Flats Lighthouse marks a dangerous rock formation in the Taunton River. It is the only offshore lighthouse in the United States accommodating overnight guests.

“When I go to a lighthouse, I feel like it is speaking to me: ‘Help me. This is what I need,’ ” Korstad says, reflecting on his passion for taking on what seems to be an endless task. “I see the beauty in it, but I see, ‘this is what needs to be fixed.’ ”

On a budget. To save money and stay close to the project, Korstad lived in the lighthouse for most of 2012. He then spent the next two years couch surfing, staying with friends and pouring every cent he earned into his new investment.

“I started with $2,000 when I moved out here,” he says. “The rest was completely raised through tours and overnight stays. The overnight stay is people’s donation to the preservation. You’re going out there to be a part of the maintenance.”

The double-layered cast iron lighthouse was thick with rust, which required endless hours of scraping. It took 110 sacks of concrete to repair the foundation. Faced with a contractor’s $140,000 bid to paint the structure, Korstad decided to do it himself with $800 worth of discontinued oil-based paint on the exterior and cheap “oopsie gallon” mixing mistakes from local home improvement stores on the interior surfaces. He paddled the paint to the lighthouse in a kayak, two gallons at a time. Then, on a rare, windless day, he painted the whole tower in a marathon race against the weather. He still goes through 300 paintbrushes a year.

Korstad combed antique shops and secondhand stores for vintage furniture and outfitted the four stories in the style of the last generation of lighthouse keepers, after the U.S. Lighthouse Service was folded into the Coast Guard in 1939. Once or twice a month, he’d catch a super-high lunar tide on a calm day and ferry out headboards, china hutches, and even a grandfather clock in an inflatable boat.

Turning Borden Flats into the nation’s only offshore lighthouse inn did more just than draw upon Korstad’s hotel experience and provide cash flow to fund his restoration. It proved to the General Services Administration (GSA) — the federal agency that sells off surplus property, including lighthouses — that he could restore and operate one of these unique treasures. 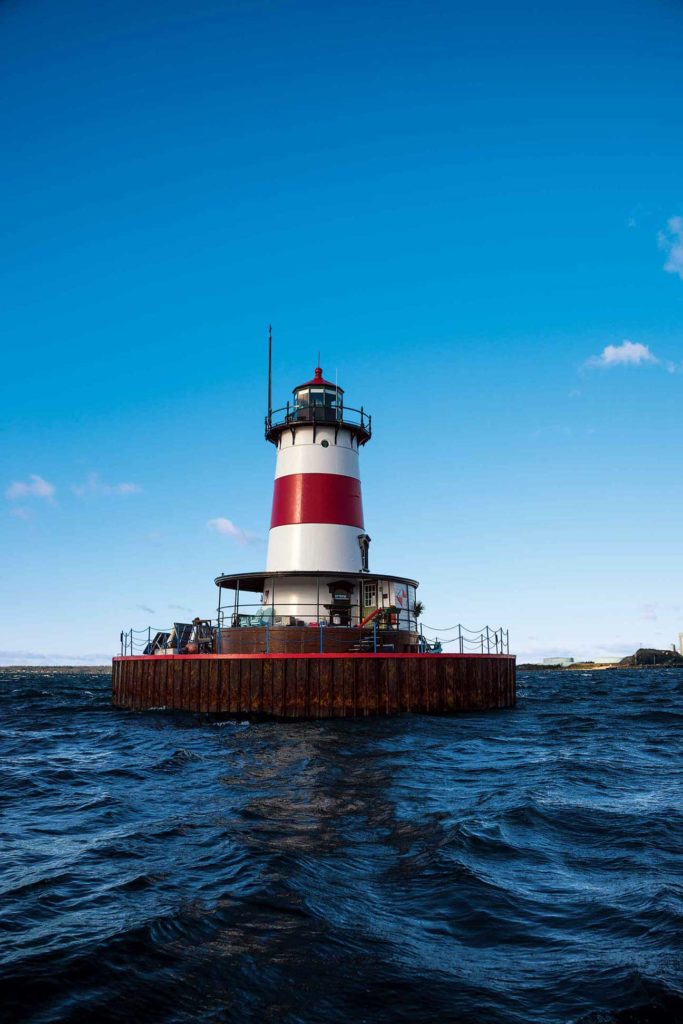 With that sound example under his belt, Korstad’s vastly detailed business and restoration plans were approved to allow him to purchase the 100-foot-tall, stone Spectacle Reef tower on Lake Superior, and a non-profit he created was awarded the 1877 Stratford Shoal Lighthouse, off the coast of Bridgeport, Connecticut, by the Department of the Interior.

Hard labor. Tours and educational programs will support the restoration and maintenance of those two properties, too. The relentless demands of maintaining a bed and breakfast — which involves working all summer long without a day off — and restoring three antique buildings that have spent over a century being buffeted daily by wind and water are setting Korstad up for a life of hard labor.

“If you really like lighthouses, go stay in one; if you want to be a slave to a lighthouse, go buy one,” he laughs. “Buying a lighthouse isn’t like, ‘oh, this is fun. I just bought a lighthouse for $50,000.’ This lighthouse is my life. It’s like having six children.” But like raising kids, it’s a labor of love.

“We’re doing an injustice to the people who worked there to let these get decrepit,” Korstad says.

Peeling walls. Jay Hyland had the same reaction when he was photographing lighthouses in the early 1980s to document them for a museum. The U.S. Coast Guard replaced lighthouse keepers with automated electronics in the ’50s and ’60s, leaving the historic structures largely to rot away.

“They didn’t have a plan for these places once they took the people out,” Hyland notes. “They were concerned about vandalism, boarding them up tightly so nobody could get in. When I would go in, there were huge sheets of paint and plaster rolling off the walls because they were trapping the moisture inside. They put aluminum siding over historic woodwork so it would look good to the community, but that was trapping even more moisture.”

Like Korstad, Hyland grew up enamored of lighthouses — their beauty, their history, their lore. Though he grew up in Ohio, which has its share of Great Lakes lighthouses, Hyland moved to New England, home to the largest array of coastal lights.

In a way, America grew up with lighthouses, too. During George Washington’s administration, Congress established a lighthouse program — the federal government’s first public works effort. The young nation set out to build lighthouses about 22 miles apart all the way down the Atlantic coast to guide immigrants and commerce safely to the bust­ling harbors of the growing country.

“We had the safest waters in the entire world,” Hyland says. “There were approximately 1,200 lighthouses built in this country. It was an altruistic endeavor, and as America’s first public works act, the building of our nation’s lighthouses is considered to be the first great work of the American people.” 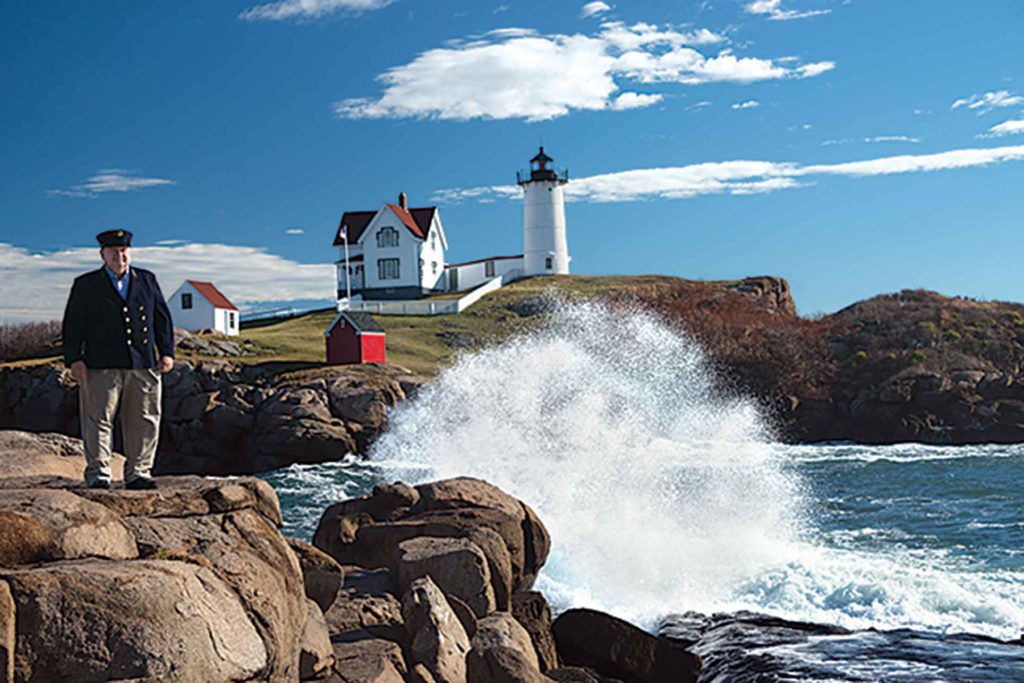 Hyland says lighthouses, nearly all of which are listed on the National Register of Historic Places, are America’s counterparts to European castles.

“I think people really love lighthouses because they are all different,” he points out. “They were designed to be that way so you don’t get confused with the ones down the coast. And lighthouses are usually located in fascinating places.”

Technology hotbeds. In a constant effort to improve maritime safety, much of the best engineering and technology of the 18th and 19th centuries was focused on lighthouses. Engineers learned how to build them farther offshore and perfected techniques for casting their light over greater distances.

The U.S. Lighthouse Service and its counterparts in Europe experimented with an array of fuels, from rapeseed oil to whale oil, kerosene, and electricity. The Fresnel lens, developed in the 1830s, concentrated and multiplied the power of lighthouse lamps. (Today, the same technology allows the Borden House Light to project the output of a 0.77-amp bulb the size of the one in your refrigerator so it is visible to boaters 11 miles away.)

Technology is one thing, but as Korstad noted, being a lighthouse keeper was all about the storms. Lighthouse keepers were national heroes, lauded in the media for bravery and perseverance and the brute strength to row through ship-crushing storms to save desperate sailors and flood victims.

One of the most famous lighthouse keepers of the 19th century was Ida Lewis of the Lime Rock Lighthouse in Newport, Rhode Island. She made her first rescue at the age of 12, when her father was the keeper. Lewis spent her life on the rock and saved at least 18 people. When President Ulysses S. Grant stepped into the water while visiting her in 1869, he announced, “I’ve come to see Ida Lewis. To see her, I’d get wet up to my armpits if necessary.”

The dangers of lighthouse keeping aren’t just old history. In 1978, two lighthouse keepers on Boon Island, Maine, had to be rescued by helicopter after a winter storm smashed sections out of the tower and destroyed every other building on the rock.

Threatened treasures. But as dangerous as the life of a lighthouse keeper could be, the biggest dangers in the lighthouse world today are to the abandoned structures themselves. The Coast Guard maintains most as navigation aids, but that just accounts for the lights and, where available, foghorns. It has no budget and no plan to save the crumbling stone, brick, or cast-iron treasures of history and architecture from time and the elements.

Hyland and several other enthusiasts began scrambling in the ’80s to save America’s lighthouses. With the help of Sen. Frank Murkowski of Alaska, they drafted and lobbied for the Lighthouse Preservation Act of 2000, allowing the federal government to transfer ownership of lighthouses.

Under the law, other federal agencies get first crack at lighthouses declared to be surplus. Then state, county, or municipal governments. Next, nonprofits and museums have a chance. Finally, private citizens can bid if the properties are still available.

“It’s a win-win situation,” Hyland says of the preservation law. “The Coast Guard gets out from under the responsibility for maintaining these lighthouses. They had no mission for historic preservation, no money, and no plan for their future.”

New life. Since the passage of the act, 121 lighthouses have been sold or transferred out of the Coast Guard’s inventory. Of those, 53 are now in the hands of private owners like Korstad.

Hyland and the group he helped establish, the New Hampshire-based Lighthouse Preservation Society, have put the law to work themselves. To date, the organization has raised $6 million to fund projects on 160 lighthouses around the country. To help raise more resources, Hyland dons his vintage U.S. Lighthouse Service uniform and serves romantic, gourmet dinners atop the society’s restored 1873 lighthouse in Newburyport, Massachusetts.

It’s a novel way to engage people with a new, deeper connection with the fascinating structures.

“There are so many great stories about these lighthouses,” he says. “Stories of saving people’s lives, pirate stories, survival stories, war stories, love stories. They’re a big part of people’s lives.”