“There is nothing Basque about these so-called ‘beehive’ ovens, which you can also see in Sumerian art — only that they were ubiquitous in the Basque farms, and the herders simply copied them from memory.” So says the Basque historian Dr. Joxe Mallea-Olaetxe. This may come as a surprise to people who have long equated the old outdoor ovens they find crumbling away in the American outback with the rugged young herders from Europe who built many of them.

The stone and brick structures do originate in a region next to the Mediterranean Sea. The archeologist Dr. Julia Costello reported as much in 1998. “Freestanding, domed, bread-baking ovens have ancient roots, traced over 3,000 years to the Upper Neolithic in Mesopotamia,” she wrote in an article in Historical Archeology. “Adopted throughout the Mediterranean during the following millennia, outdoor baking ovens are common in Arabian, Turkish, Slavic, Greek, Italian, Swiss, Spanish, French, German, and North African cultures.”

The Spanish brought stone ovens to California beginning in 1769 when they began colonizing the coast, she wrote. When fortune-hunters from other cultures flooded California after the 1848 discovery of gold, oven-building traditions arrived with them.

Costello’s research concerned specifically the ovens built by Italians who migrated to the western Sierra Nevada foothills during the Gold Rush. On the other side of the mountains during the same time period, young Basque men from France and Spain were building ovens that worked for them – ones on thick, raised foundations and with rounded tops and brick-lined interiors large enough for baking multiple loaves of bread.

Remnants of the Basque ovens remain up and down the Sierra Nevada next to grassy clearings that once fed thousands of sheep. A few stand just as solidly as when they were built — protected by wooden shelters and shaded by trees. Some remain only in memory, nothing but rubble heaps that may never be found.

“The Tahoe National Forest…felt that the sheep camps were unique and perhaps rare places on Forest Service land within California,” Smith says. “The ovens happen to be an even more unique aspect of the camps here, and they certainly provide a wonderful visual and direct functional link to Basque heritage — the role these immigrants played in the sheep industry in the American West, and in the ancillary industries that supported the sheepherders such as Basque hotels and restaurants.” 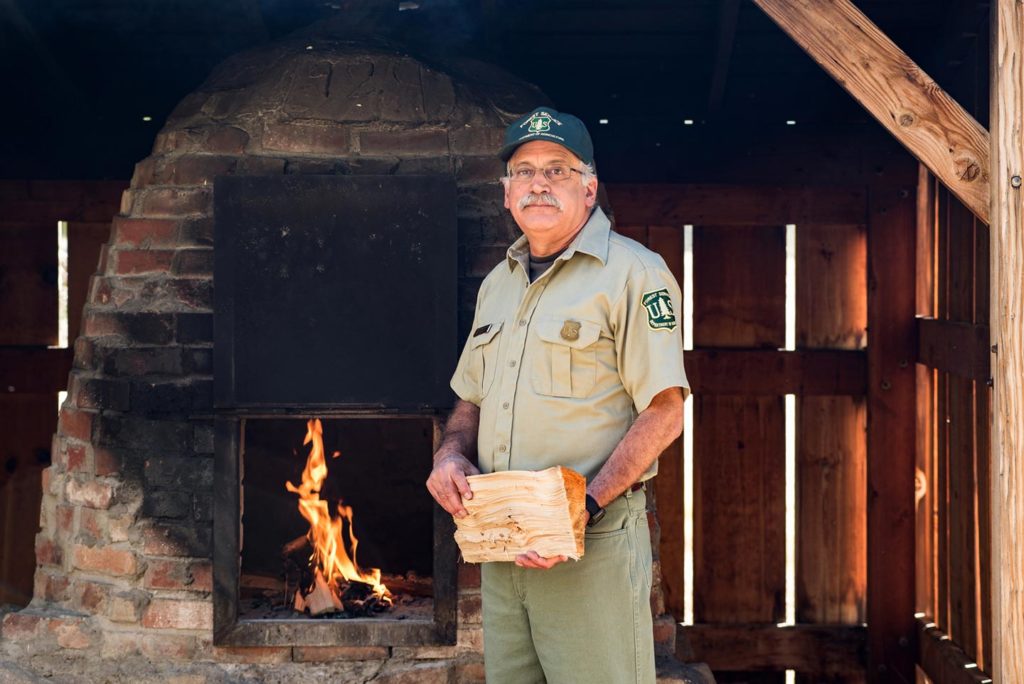 “The ovens … provide a wonderful visual and direct functional link to Basque heritage.”

Ovens like this were part of permanent settlements used by sheep operations between May and October every year. In winter, the sheep were grazed in the lower valleys of Nevada or California, but soon after the lambs were born in spring, ewes and lambs were trekked overland, and later move by train or truck, to higher meadows.

Located in a tree-shaded northwestern corner of Kyburz Flat, the Wheeler Camp was a distribution point for supplies, and contained the usual camp buildings: cookhouse, cabin, sleeping platforms, corrals, chicken coops, spring box and barn. Camp tenders butchered lamb and stored it along with ham, bacon, rice, beans, dried fruit and canned goods to be delivered in regular portions to the herders. In the ovens, they baked bread.

The Wheeler Camp oven was built in the 1920s by the brothers Martin and Felix Gallues, according to archeologist Cindy Baker, who produced a 2004 report on three sheep camps for the Forest Service. In the late 1960s, after the oven baked its last loaves for herders, the Forest Service demolished everything in the camp except for the corrals and the oven. In the 1980s the oven collapsed.

Rebuilding the structure was a big effort. Logistics and knowledge that are more familiar now were at the time only isolated pieces of a puzzle.

Eight years later, newly surfaced historical details indicated that the typical Basque-made oven was not as tall as the one the group reproduced at Kyburz Flat. “Most Basque bread ovens are as round as they are tall (usually four to five feet, but I have seen some three feet or smaller) and are constructed with brick,” Mallea-Olaetxe wrote in his book “Speaking Through the Aspens” published in 2000. “Some are built on a base of rough boulders and for added durability also have an outer lining of stones. The inside is always brick. They have a chimney at an angle toward the back, and an opening in front.”

But in the early 1990s, when the volunteers gathered the first original oven pieces scattered about, there were still plenty of mysteries about how to build it.

“What we found onsite when we started work was a pile of rocks,” Mallea-Olaetxe recalls. “We had some photos from the 1940s, but nothing about its scale and size. That’s why the present oven is taller than the original and others.”

Reconstruction. What they also found onsite was evidence that vagrants were camping for long periods, using the place as a hangout. An old bathtub was full of bullet holes — target practice, says Michael Baldrica, the US Forest Service archeologist who spearheaded the project. 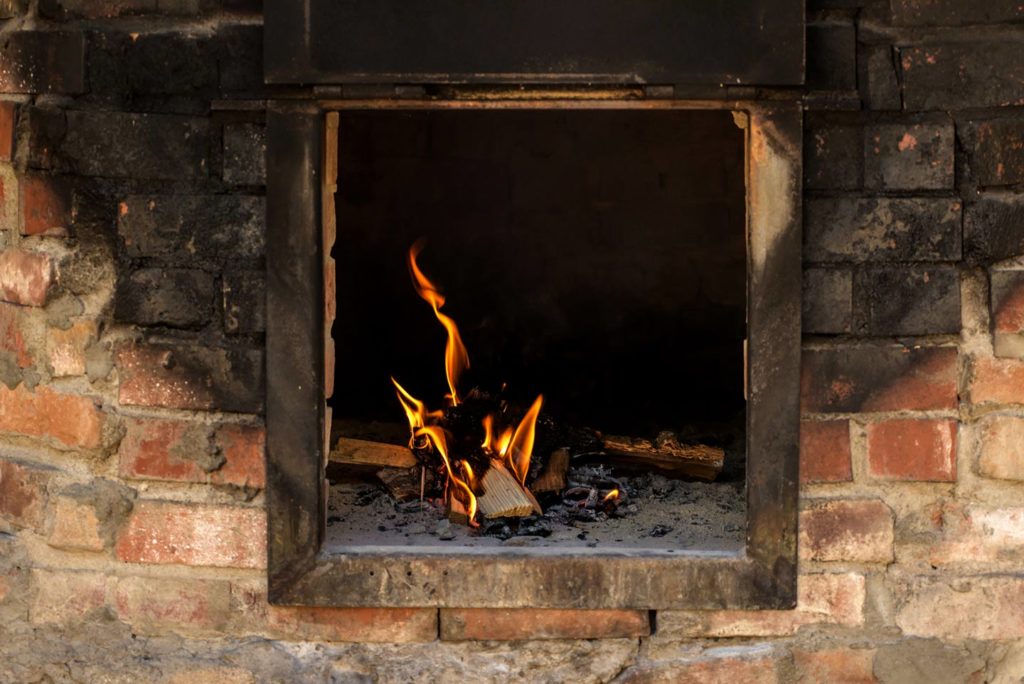 The first steps in the rebuilding required a treasure hunt for details. The daughter of the family who’d run the camp, Irene Gallues-Giossi, lived in Reno at the time. Her photos and recollections provided much-needed links to the oven’s story.

Vandals had plundered many of the camp materials, but some original bricks were still around, says Baldrica. New bricks were brought in to complete the dome. The dome was reinforced with steel brackets that kept the bricks in place while the cement mortar hardened.

A flue built into the ceiling improves airflow for fire management. Some of the older ovens had a hole in the ceiling that the bakers sealed with a brick when the fire inside was strong enough to hold its own, Baldrica says. Hinges at the top of the Wheeler Camp oven secure it to the structure so it doesn’t get lost or taken.

“It doesn’t take much to get the fire started,” Baldrica says. In fact, just a few pieces of kindling, some paper and a match set the fire aflame.

Baker’s Secrets. But it does take quite a while to warm the oven enough for baking. Truckee, Calif. resident Ann McBride is among the most experienced people who’ve been putting its quirks to the test. For 20 years, she’s been reserving Wheeler Camp for annual cookouts. “I grew up in Basque country and my father was a master of cooking in coals,” she says. “I remembered the herders with their Dutch ovens, and have learned a few tricks. I have done everything from whole chickens to legs of lamb and everything in between – but bread is best.”

She usually bakes three to four big loaves at a time. “It takes about four to five hours to get it up to temperature,” she says, “and of course, there is no way to control that. I clean the Dutch ovens well beforehand and then let them air out for a few days.  On the day of the baking, I coat them completely, inside and on the lid and rim, with Crisco.”

She fits aluminum foil into the bottom of each oven, and coats it with Crisco, too. “This helps the bread to pop out when it’s done,” she says. After the bread has risen twice, she pushes the oven coals to the far back of the space. “You don’t want any coals touching the Dutch ovens. I have also found it helps to bake evenly if the Dutch ovens are placed on top of bricks for air circulation.”

After 30 minutes, she removes the lids to let the bread tops brown. “It is not unusual for part of the bread to be black,” she says. “It’s so hard to control the heat and move things around without singeing your hair.” Burned ends go to her dogs.

For McBride, and perhaps for the others who love to bake bread the Basque way, there may be as much pleasure in spending an afternoon on a quiet edge of the forest as there is in the tasting the toasty bread.

“Transport yourself to the 1880s or early 1900s,” Mallea-Olaetxe likes to say. “You are alone with 1,500 sheep, hours away from the closest town, even with a good horse. Roads are few or non-existent.” A camp tender arrives carrying fresh supplies for the week.  The bread couldn’t possibly still be warm after its journey from the smoldering brick oven at camp. Nevertheless, that first slice is forgiving and sweet.

A look at some of our favorite shots from The Furrow and Homestead magazines.