When Anna McPherrin Harvey was a teenager, she spent her summers in the northern Sierra Nevada at a family cabin near a bucktoothed granite outcrop called the Sierra Buttes.

The McPherrin family raised lambs for meat and sheared the ewes for wool. The Sierra Buttes property was where they lived from mid-May through mid-October when their 5,000 sheep were moved among mountain meadows for grazing. In winters, they and the sheep lived in the warmer, lower-elevation Central Valley.

Anna Harvey’s mother, Begonia Solozabal, was full-blooded Basque. Her father, Calvert McPherrin, had met his wife in the Pyrenees mountains of Spain. At the time, McPherrin knew many Basques. During the late 19th and early 20th century, young Basque men had come to the American West to work as herders and lived in sheep camps like his own. Calvert and Begonia were married in 1963 and in time gave birth to two daughters, Anna and Rosie.

As the daughters grew, their father shared every aspect of the family business with them, including how food was produced and stored, and how supplies were delivered from a main camp in Carmen Valley, not far from the Sierra Buttes, to remote locations where the young herders were caring for their sheep. One of Harvey’s favorite activities was delivering bread.

The baking of bread took place at the Carmen Valley camp every five days. In the mornings, the dome-topped brick oven, a centerpiece at the 1924 camp, was lit with a wood fire and warmed to 400 degrees. Eight to 10 heavy cast-iron Dutch ovens full of dough were placed inside of it next to mellowing coals. As the yeast expanded and the gluten and starches grew strong, a toasty wheat smell wrapped itself around the camp’s every weathered building and soaring cottonwood tree.

“That smell of baking bread — it was heaven,” Harvey recalls. “We always had to go on bread making day.”

Although everything has changed now — the camp ceased operating for sheep in 1982, and the family’s tender now delivers supplies to remote herders by truck — to Harvey, the memories of bread day are still fresh. One way she’s kept them alive is by building an oven of her own outside of her new home. 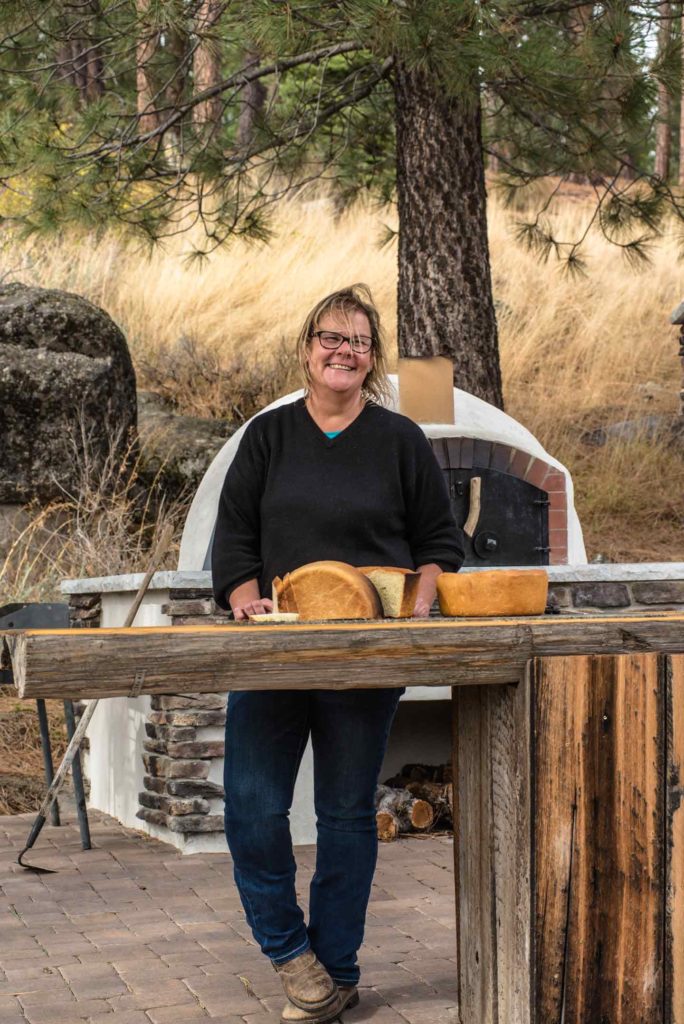 “That smell of baking bread — it was heaven,” Anna Harvey recalls. “We always had to go on bread making day.”

Bread Day. When Harvey was a child, the Carmen Valley camp contained the camp tender’s cabin, an equipment garage, a potato house, a root cellar and the 1940s oven. The heart of food production was inside the tender’s cabin. Today dents and scratches on the walls tell of the work that went on there, especially during the making of bread. Harvey reads the wall marks as if the furniture were in place just last year. “These were cupboards,” she says, gesturing to a lattice of support boards mounted on wall studs. “There was a majestic wood-burning stove there, and the tender made the bread and let it rise here on a table.”

The herders had a robust diet. They needed it, for the food had to provide plenty of energy to men who in all sorts of weather kept track of sheep and handled illnesses and predators. Every five days, McPherrin and his daughters delivered the following goods: for protein — a quarter of a lamb, a quarter of a ham, a quarter slab of bacon; for vegetables — cans of tomatoes, creamed corn and peas; and for fruit — canned peaches, fresh cantaloupe and apples in season. There were also carrots, garlic and potatoes, as well as Monterey Jack cheese and, the pinnacle of it all, a jug of Carlo Rossi wine. And there was bread.

The herders enjoyed the new bread by the slice with butter. “They stored the bread in flour sacks,” Harvey says. “In the mountain air, the bread would dry out quickly. In the mornings they’d pour their coffee over it. That was their breakfast — stale bread and coffee.”

New Oven, Old Ways. Harvey and her husband, Don, are multi-talented do-it-yourselfers. Together they built their new log house a few miles away from Carmen Valley. They also built barns, a pond, and corrals where they keep Romney and Rambouillet sheep. Rambouillet is a fine wool worn easily next to the skin, and Romney has a longer staple length that makes it easier for hand spinners to spin. “I have a soft spot for the Rambouillet,” Harvey says. “That is what we raised, and they are a great breed for the High Desert mountain area, where I live.”

Awhile back, she asked the Forest Service to let her move the old family oven to a spot next to her home so she could preserve it. When the Forest Service refused, she and Don decided to build their own. Handy as they are, for this job, they needed help: Creating a domed structure requires an expert.

“Not only is it round, and you are working with a rectangle brick,” Harvey says, “but you have to bring each layer of brick inward just the right amount to make the dome smaller as you go upward, so it won’t implode on itself. There is a lot of cutting. It took a very skilled mason a good week just to lay the bricks for the dome alone.” 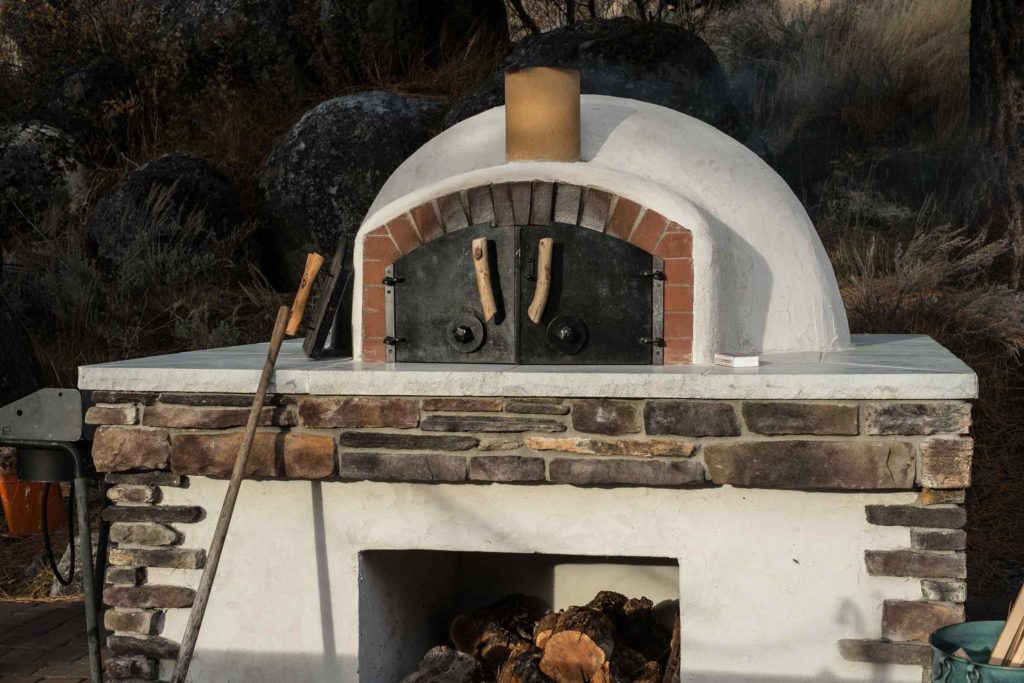 Harvey and her husband, Don, are multi-talented do-it-yourselfers. Handy as they are, for this job, they needed help: creating a domed structure requires an expert.

Finished last spring in time for a son’s wedding, the oven performs as ordered. Harvey can now make the burly loaves of bread she remembers eating as a child.

“It is an art to know exactly how much dough to put into the Dutch oven, and how to move it into the brick oven without causing the dough to fall,” Harvey says. The dough is sensitive to any vibration. “As Dad said, ‘You breathe and it falls.’”

A Basque method. A typical bread day at the Harvey Ranch can begin early when Harvey builds a wood fire in the back of the oven. In her kitchen, she uses a table knife to sift the Gold Medal unbleached all-purpose flour, the same brand and type her father used. (“We never used bread flour; it’s not an airy loaf,” she says.) Just as her dad did, she uses her fingers to whisk one and a half packets of dry active yeast (not the fast-rising kind) in a cup of lukewarm water.

Into 12 cups of the sifted flour she stirs 1 1/2 teaspoons of Morton’s salt and 3 tablespoons of sugar. She then adds the stirred yeast plus another 4 1/4 cups of water, for a total 5 1/4 cups of liquid.

In an electric mixer (“Dad would be rolling in his grave”) she kneads in few minutes what the camp tenders spent a much longer time doing with their hands. She adds flour in small doses until the dough no longer sticks to the bowl.

Now Harvey turns the dough onto her granite counter top to knead gently, sprinkling on more flour until the mixture stiffens slightly and no longer leaves stretchy threads on her fingers. She puts the dough into another bowl, covers it with a warm, moist cloth and sets it on the warm stove top for rising. After an hour, she punches down the puffy dough, separates it into halves, and places each into the belly of a warmed, oiled cast-iron Dutch oven. The mixture rises once again. She’s looking for it to rise to just the bottom of the lid, but doesn’t want to take off the lid to view it because any jiggling could collapse the sensitive compound. 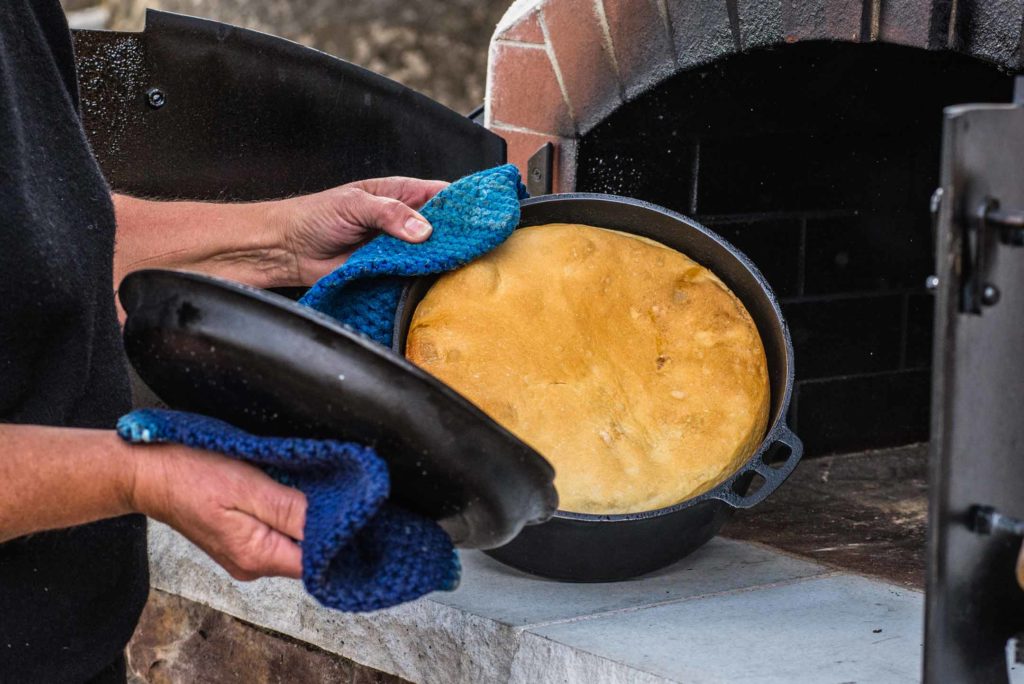 After an hour, outside again, she opens the brick oven doors where a thermometer registers about 400 degrees. She places the Dutch ovens inside.

Twenty minutes later, she swings open the doors again and ever-so-gently turns the Dutch ovens in order to avoid letting any one side get too much heat.

Another 20 minutes, and out they come.

There’s a legend that says sheepherders used to hand the first fresh slice to their dogs. Harvey doesn’t fall for it. “Why would they give the best slices to the dogs? They’re too good.”

The first slice of this bread is creamy soft and enveloped in firm golden crust. All that’s missing is a cup of Carlo Rossi wine.

A dome-topped brick oven, preferably built by a Basque!

Looking to make a start in farming? Try the New Farmer Academy.