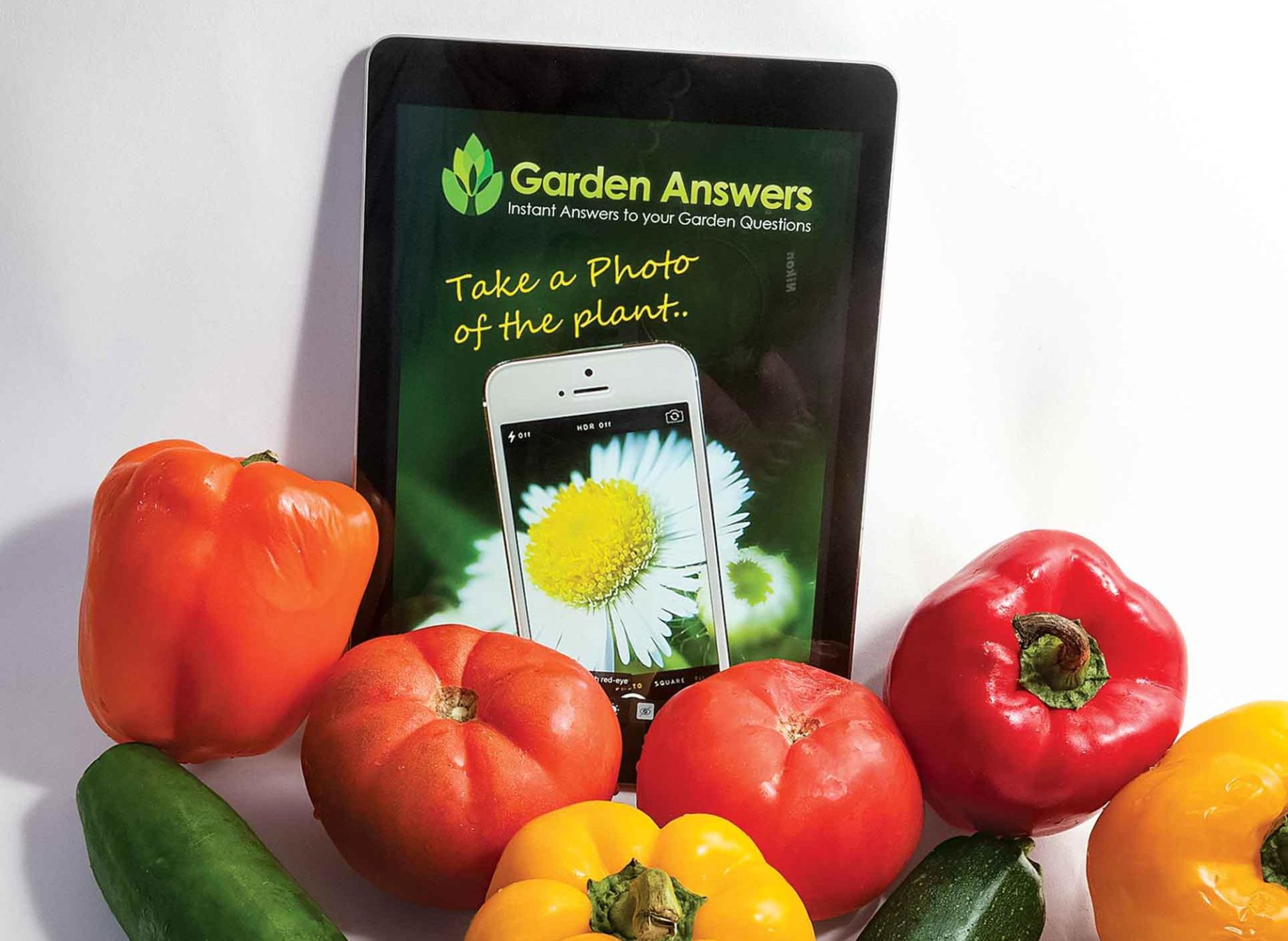 Smart phones have become one of gardening’s   favorite tools as apps for them and other portable devices have put science-based garden and landscape information in the palm of the hand. From identifying weeds and planning a garden to caring for trees and tracking the migration of Monarch butterflies, ‘there’s an app for that’— and nearly anything else you can imagine.

Apple reports the average iPhone owner utilizes 100 apps selected from more than two million available from the company’s app store. Most are also available for Android devices at the Google Play site. Many of the garden and landscaping apps have been developed by university experts and are used  in state Master Gardener training programs.

“Many excellent apps have been developed by companies in the garden industry, but there’s comfort in knowing that those from university experts are unbiased and are based on sound science,” says Purdue University entomologist Cliff Sadof.

Sadof has worked with Purdue plant pathologist Janna Beckerman in developing a series of highly-regarded apps for both Apple and Android devices.  The series includes the Purdue Tree Doctor; Tomato Doctor, Perennial Flower Doctor and Annual Flower Doctor. “We’re now developing Purdue Turf Doctor and may do one for vegetables,” says Sadof.

“I’ve got shelves of books in my office that help  diagnose and manage problems that impact trees and flowers, but you can’t take those volumes to the garden and page through them to answer questions,” says Beckerman. “These apps provide easy access to information when and where it’s needed and in an intuitive and highly visible manner.”

The Tree Doctor discusses more than 200 problems on 60 different trees common to the Midwest and Northeast and Tomato Doctor uses nearly 500 images to help growers throughout North America. Like most apps, the Doctor series range from 99 cents to $1.99. Learn more about them at Purdue’s website purdueplantdoctor.com. 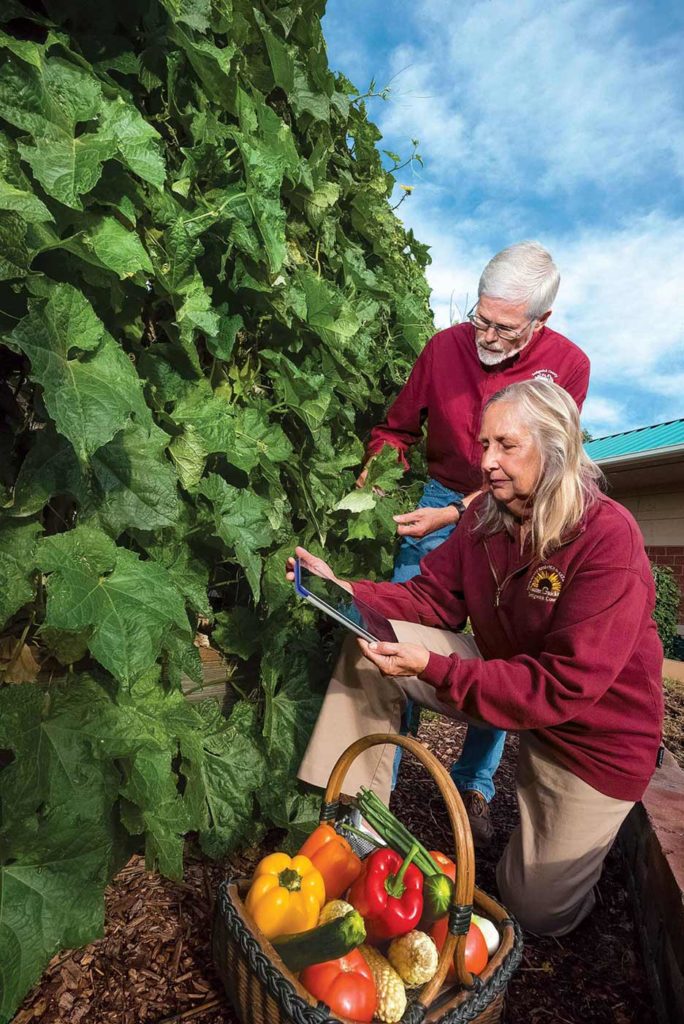 Master gardeners across the country have found apps to be a great help in diagnosing garden and landscape problems.

Picking favorites. University of Illinois Extension educator Chris Enroth often reviews garden apps on his blog Green Speak. “Many apps are free, but even those that cost a few dollars deliver a lot of value for that price, and with developers pushing updates to users they don’t get old,” he says.

Enroth highlights a few of the three dozen garden and landscape apps on his iPad. Those include   the free offerings of Leafsnap, which uses leaf recognition software to identify trees from a photo; Garden Answers, which uses a similar technique to identify and provide detailed information on 20,000 plants; ID Weeds, a new app from the University of Missouri that identifies weeds; and Bee Smart, a free app for Apple and Android users that customizes a gardener’s best choices for pollinator-friendly plantings.

“There are also some fun ‘citizen science’ apps that get users involved in research efforts,” says Enroth. “BudBurst ties a network of observers together to monitor plant growth as seasons change; Journey North aids in tracking the population and migration of the Monarch butterfly; and Bird Log is a popular way for bird watchers to tie into Cornell Ornithology’s global eBird observation project.”

Enroth says landscape design is also made easy with apps. “Home Outside Pallette and iScape are good examples of apps that allow users to visualize what their landscaping will look like by virtually planting trees, bushes and flowers on a picture of their house on a smart phone or computer tablet.

Michigan’s Master Gardener program turned to apps when Extension specialists and educators determined they needed new ways to serve Michigan’s burgeoning number of gardeners. “We launched our Smart Gardening program to increase the environmental awareness of gardeners to the latest science-based findings for pesticide and fertilizer use,” says program director Mary Wilson. “Smart phone apps are among the various easy-to-access electronic tools we’re using in this effort.”

Wilson lists Dirr’s Tree and Shrub Finder ($14.99) as one of her favorite apps. “Anyone connected to gardening and landscaping knows of the University of Georgia’s Michael Dirr and his classic The Manual of Woody Landscape Plants. The app for that covers 1,670 species and 7,800 varieties with 7,600 images and 1,120 drawings. You can search by 72 different criteria to find the perfect plant for the landscape or garden,” she says.

Steen explains that a user of the app can submit a picture of a tree whose location is then determined  using its GPS coordinates. When a later user seeks information about the same tree species, the app provides a map showing where a nearby example of that tree is actually growing. Also, the app allows curious users to pose their questions to a tree expert at Virginia Tech University. 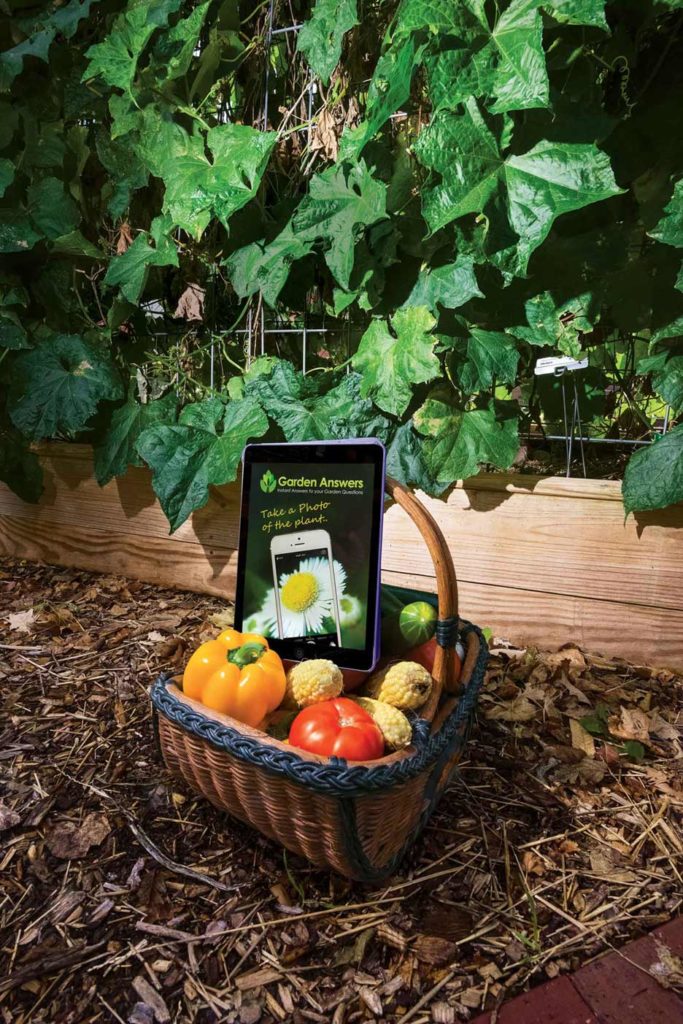 Garden Answers is reportedly the most widely used garden app. Available for both Apple and Android devices, the app is capable of instantly identifying up to 20,000 plants.

Safe downloads. University of Minnesota education specialist Andrea Rice offers advice when downloading apps. “Smart phones are susceptible to spyware and malware much like computers, so installing a security app is a good idea — it will scan other apps and tell you if one is infected. Check regularly for updates to this app,” she says.

“Only download apps from trusted sources, and your phone running slower after downloading an app is an indication it was infected, so uninstall it. Also, read the reviews and permissions on apps
before downloading them. It’s also good to give feedback to the developers so apps can be improved for both yourself and other users,” she adds.

“It’s okay to give free apps a try,” adds Enroth, “but do be aware that these sometimes require payment to reach advanced levels — that’s always a little disappointing to encounter.”