True lovers of daylilies know this flower is anything but common.

True lovers of daylilies know this flower is anything but common.

On a fresh spring morning in early June, Oliver Billingslea readies himself for a small group of friends from church coming to see his yard in Montgomery, Alabama. When they arrive, the guests will discover the day is even more beautiful than they anticipated, for Billingslea will show them his fine collection of daylilies, in peak bloom. But he will do much more. He’ll share his knowledge about the flower’s history, his tips for caring for the plant, and why he finds this plant so fascinating.

“Oh, look at this one over here,” one woman tells another. They walk a short distance, raise their cameras and begin taking photos. Billingslea approaches and offers gentle advice. “You might try taking a photo from here. This is a really good angle,” he proposes. The tip is a good one, and they quickly realize the pictures will indeed be better.

The daylily is a plant most gardeners will have somewhere in their yard. It is easy to grow and requires so little maintenance that many gardeners give it little thought. At the home center, gardeners pick up a readily available plant — an Hemerocallis ‘Stella de Oro’, for instance, is popular everywhere — unaware that with a little extra digging, so to speak, the world of daylilies reveals itself to be something much greater — more like a universe.

A choice of thousands. More than 80,000 hybrids of daylilies are registered. Except for pure blue and pure white, they seem to be of all colors, all textures, and all forms, flowers shaped in circles, stars, and trumpets. They are ruffled and smooth with all textures in between.

Daylilies originally came from the Far East —China, Japan, the Koreas, and even up in Manchuria, and made their way west by trade routes. The species H. fulva can be dated in England as early as 1570. At least 13 species of daylilies have been identified — Billingslea says there may be as many as 30 — but the H. fulva species is one just about everyone has seen at some point. In America it’s often called the “roadside” or “homestead” lily —the common orange daylily seen growing wild in ditches near old, abandoned farmsteads. 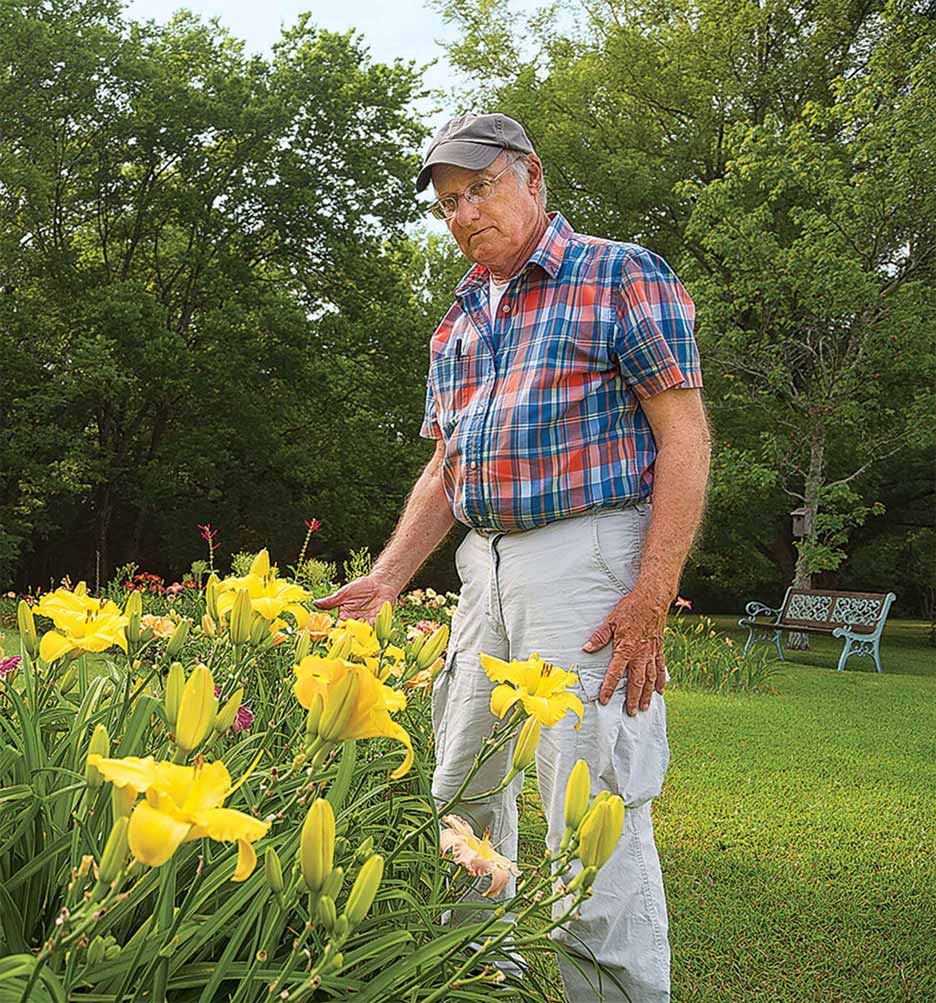 Daylily enthusiast Oliver Billingslea is eager to share his passion, something he has had since a teenager.

It probably was not until the late 1800s that gardeners began hybridizing the species. George Yeld of England named the first cultivar, H. ‘Apricot’, in 1893, but three decades later, Arlow Stout of the New York Botanical Garden began creating cultivars with a passion. The daylily grew in popularity. From species that began with only three colors — orange, yellow, and a dull red — daylilies today can be found in a multitude of colors, from almost pure white to everything except pure blue.  Breeders are working on that, says Billingslea.

Much variety. They are “eyed, banded, edged, watermarked, or patterned,” Billingslea writes in his “The Illustrated Guide to Daylilies,” an essential book for any gardener with an interest in learning more. Daylilies today are small and large, double flowering, and they vary in form, from round full flowers to spider-like, with petals long and narrow.

“I didn’t used to like the spider daylilies,” admits Billingslea. Now he’s a big fan. “They are very elegant. What spiders do for the yard is they give an airy movement. It’s almost like they’re dancing.”

Few people like to have the word “expert” attached to their names — Billingslea certainly wouldn’t; he’s a humble Southerner — but that’s what he is, first drawn to the daylily when he received some daylilies from his sister while growing up on a farm in Mississippi. As a teenager he began to crossbreed them, and he grew to love them. “I like the fact they’re different every day,” says the retired American literature professor. “You go out and there are a total different set of blooms.”

He likes the mysterious journey of crossbreeding as well. “When you hybridize, you never know what you’re going to get,” he says. “You might cross a pink and a peach, get a seed pod that has 12 to 15 seed, and every seed will produce a different plant.” Billingslea registered his first daylily in 1984 and so far has registered 59 daylilies.

As the name states, the daylily produces a new flower each day during its blooming period each spring. Its blooms are numerous per scape (the stalk on which the flowers sit), each bloom appearing early morning and closing during the evening. The next day, a new bloom takes its place. But there are also nocturnal daylilies, flowers that open late in the afternoon and bloom throughout the evening and through most of the next day. “One of them is the species H. citrina,” says Billingslea. “It blooms at night and smells very lemony like.” And some cultivars even rebloom more than one time during the season — once in the spring and then again in the late summer or fall.

Billingslea is an active member of the American Hemerocallis Society (daylilies.org), serving on its board of directors as chair of special projects.  (“Hemerocallis,” he assures his friends, “is just a fancy word for a daylily.”) The society’s membership numbers more than 6,000, and more than 600 members gather at a convention each spring to share the latest in daylily developments. That’s when the Stout Silver Medal is awarded to a cultivar that has proven its beauty and endurance. 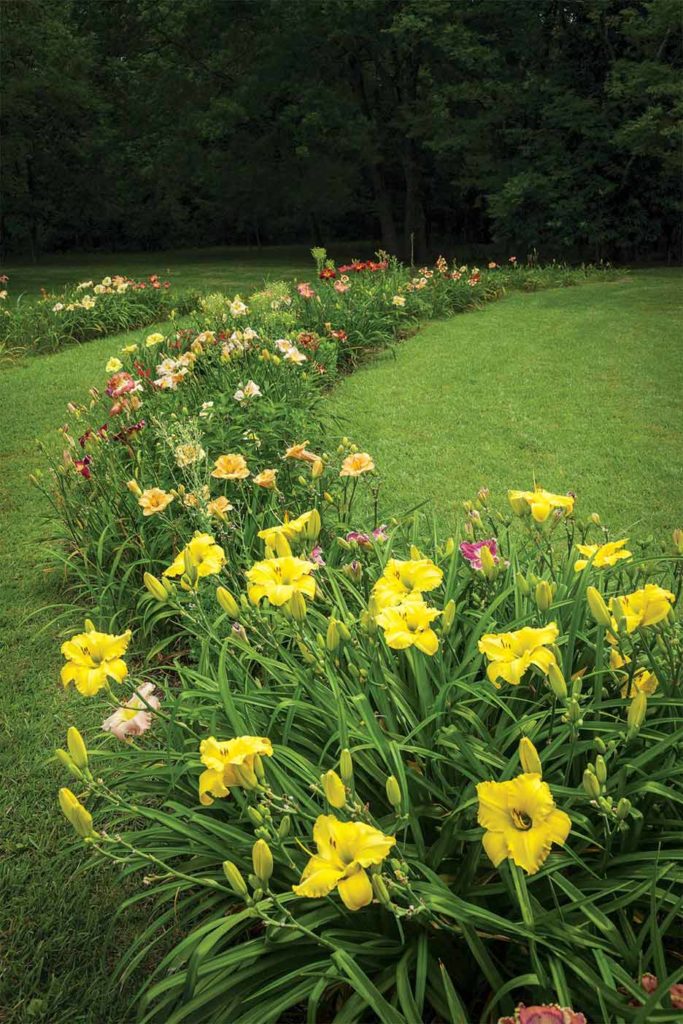 Daylilies look good in groups, but gardener Oliver Billingslea includes companion plants with them so something is blooming even when the daylily isn’t.

With that, Billingslea mentions the Huntsville Botanical Garden three hours to his north in Alabama. “That’s one of the finest daylily collections in the nation,” he says. “It has all the Stout winners from 1950 to the current day.”

Finding favorites. In the Rosabelle Van Valkenburg garden in Huntsville, master gardener Mary Shaw tends to the collection, removing spent blooms and flower scapes and keeping the beds tidy during peak season. She has her favorites: H. ‘Clothed in Glory’ (“I don’t know why. It startles me.”), ‘Black Ambrosia’, and ‘Symphony of Praise’. It’s difficult to name a few when you’re caring for more than 800 varieties. “We’re at a place where we can’t really hold any more,” she says. Of course, being in Alabama, room is made for varieties ‘Bear Bryant’ and ‘Lady Bear Bryant’.

Shaw notes she was like many gardeners when she moved to Huntsville from Florida — she had daylilies, but really didn’t know much about them. “When I came, I decided I’m really going to learn how to grow daylilies.” She couldn’t have had a better teacher than Rosabelle Van Valkenburg. “Her knowledge is really fantastic,” says Shaw. Van Valkenburg, now 94, has been only happy to help.

Vacationers get an inside look at rural living.

A nationwide agrotourism program offers a breathtaking view of Switzerland.