Homestead National Monument of America is the destination dedicated to the ultimate American Dream—owning land.

Homestead National Monument of America is the destination dedicated to the ultimate American Dream—owning land.

Daniel Freeman knew he might soon be called to duty in the Civil War, and he also knew that the Homestead Act of 1862 was due to go into effect on Jan. 1, 1863. Rather than miss out on his chance to own land—free land—Freeman  crashed the New Year’s Eve party where a land office employee was celebrating, and twisted his arm. He convinced the fellow to open his shop and, at
10 minutes after midnight, Freeman received the No. 1 claim from the Brownville, Neb., land office.

That 160-acre claim was located just outside the fledgling town of Beatrice. Today on that plot of land stands a tribute to the tenacity of Freeman and millions of others who settled the American frontier. It’s called the Homestead National Monument of America, and this southeast Nebraska site operated by the National Park Service features a tallgrass prairie, historic buildings, and museum exhibits that tell the homesteaders’ stories.

Enduring effort. Experts say that the Homestead Act of 1862 was one of the most revolutionary concepts for distributing public land in American history—and the effects of this monumental piece of legislation continue to impact the nation’s direction to this day. “This legislation was incredibly progressive, way ahead of its time,” says Susan Cook, chief of interpretation and resource management at the Homestead National Monument of America.

“It allowed nearly any man or woman a chance to live the American dream,” she continues. “Women did not have the right to vote, but they had the right to homestead land under this act.” Immigrants, as long as they desired to become a U.S. citizen, were included; so were former slaves, who were freed by President Lincoln’s executive order, the Emancipation Proclamation, that went into effect the same day as the Homestead Act. 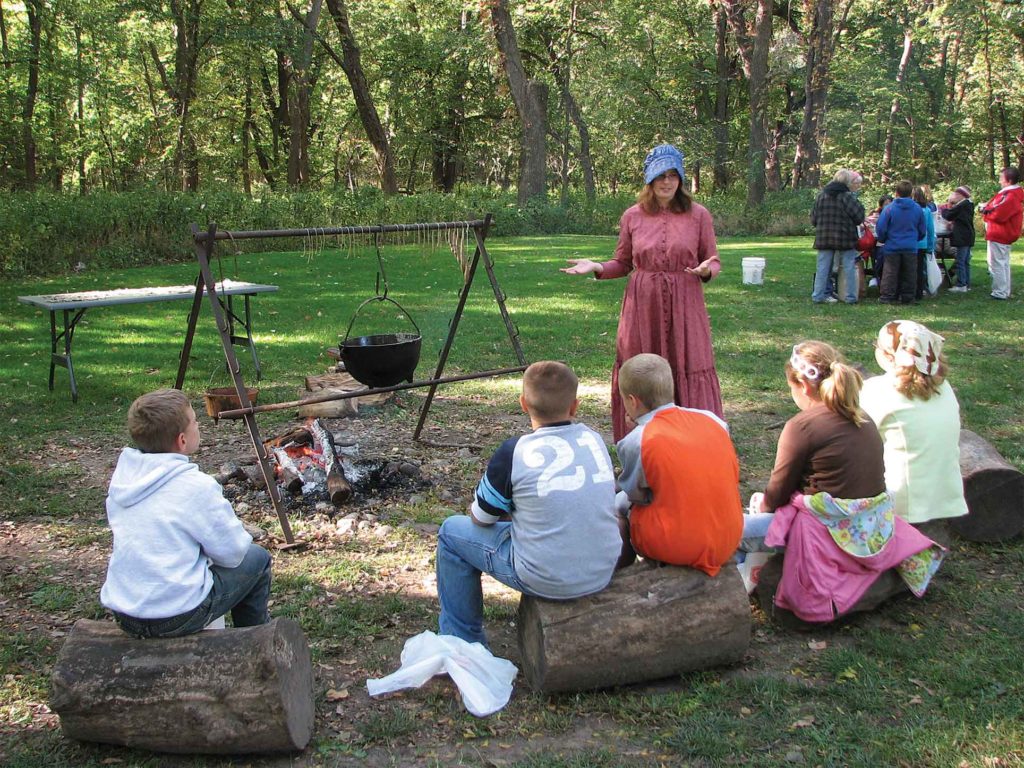 Interacting with visitors is a big part of a visit to the Homestead Monument, including living history presentations each summer during the site’s annual Homestead Days.

This homestead legislation endured through 24 presidential administrations, from Lincoln to Reagan. The number of acres homesteaded reached its peak in 1913; the last phase ended on the Alaska frontier in 1986. Over the 123-year life of the act, about 1.6 million people were successful in settling more than 270 million acres in 30 states.

Visitors to the national monument learn of the intricacy of the homesteading process. Prospective homesteaders first had to file their intentions at the nearest government land office, where a brief check for previous ownership claims was made for the plot of land in question, usually described by its survey coordinates. A $10 filing fee (plus a $2 commission to the land agent) allowed the homesteader to receive a temporary claim to the land.

The homesteader then could begin the process of “proving up” the claim by building a home and other improvements, and farming the land for a minimum of five years. When those requirements had been met, the homesteader needed to find two neighbors or friends willing to witness a statement about the land’s improvements and sign the “proof” document. Successful completion of this form, along with a $6 fee, allowed the homesteader to receive the patent (deed) for the land, signed with the name of the current U.S. president.

The full story. State-of-the-art exhibits present homesteading in an interactive setting at the Homestead National site, looking at the nation’s epic experience from a variety of viewpoints. The result is a comprehensive view of how the Homestead Act of 1862 affected such things as immigration, agriculture, industrialization, native tribes, the tallgrass prairie ecosystem, and federal land policies. “We try to present these topics in a way that is both educational and thought-provoking,” Cook says. “There were many consequences. The tallgrass prairie was turned into the nation’s breadbasket, but there is only about 1% of the original prairie left. We also talk about the native people of the area, and how the Native American way of life was destroyed by the mass migration of settlers into the West.” 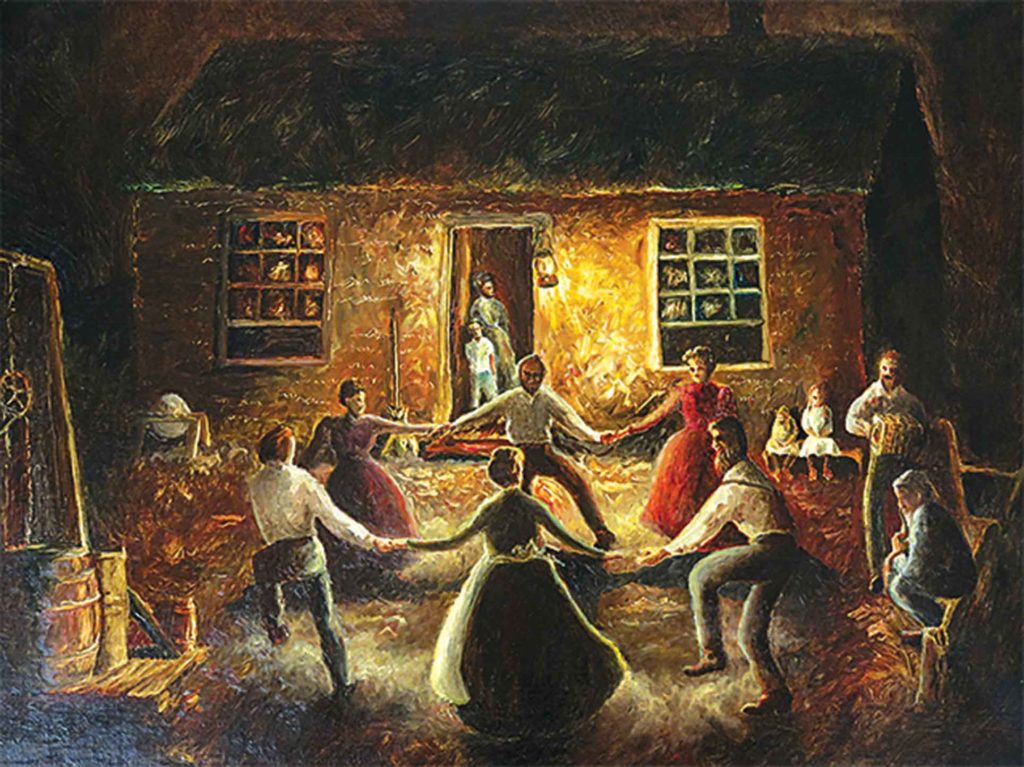 A daughter of homesteaders, Velma Armstrong captured the pioneer spirit in her colorful and lively compositions.

Some of the exhibits show the humble beginnings that homesteaders experienced. Built in 1867 and deluxe for its day, the 14×16-foot Palmer-Epard cabin serves as an interpretive feature. Visitors get an idea of just how cramped the pioneer life was, considering that 10 people (or more) may have been housed in such a modest structure.

The Freeman School, located adjacent to the original Freeman homestead claim, was a center of education for prairie children from 1872 until 1967. Sitting at the edge of a restored prairie, the Freeman School provides a window to the past, as the National Park Service has restored the school to look much like it did in the 1870s.

Symbolic twist. An underlying symbolism permeates a visit to the Homestead National Monument. The Homestead Heritage Center is designed to look like a single-bottom plow cutting through the prairie sod; its roof points the way, literally and figuratively, to the American West. A wall of windows treats visitors to a view of unbroken tallgrass prairie, a view not unlike the ones experienced by the nation’s original pioneer families.

Even the parking lot serves as a teaching tool. “We often were asked by visitors how big an acre is, so our parking lot is exactly one acre in size,” Cook says. “There also is a  ‘Living Wall’ along the sidewalk entrance to the building, a physical representation of the percentage of land that was successfully homesteaded in each state.” The states, from Florida to Alaska, are lined up in order from east to west as a visitor would see them on a map.

While the monument brims with history, there also is a focus on the future. Experts say that there are more than 93 million descendants of American homesteaders; the Homestead National site is constantly looking to document stories of their experiences. The monument has an exhibit listing well-known Americans with a personal connection to the homestead act. They range from former Nebraska football coach Tom Osborne to the author Laura Ingalls Wilder; from George Washington Carver
to the legendary entertainer Lawrence Welk. 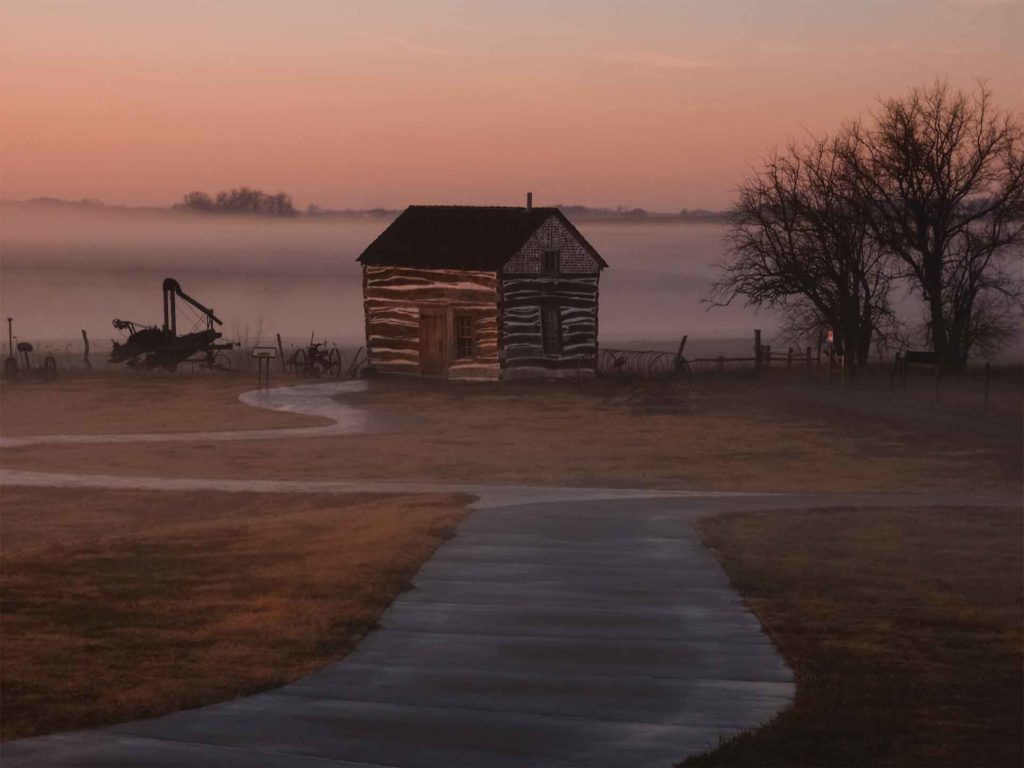 Built in 1867 and deluxe for its day, the 14×16-foot Palmer-Epard cabin serves as an interpretive feature at the Homestead National Monument of America, giving a glimpse of life on the frontier in the years following the Civil War.

“We also do a lot of work with young people,” Cook says. “They range in age from elementary school through college. We have a huge curriculum-based program to fit the needs of educators, and we also work with kids on a variety of outdoor activities and hands-on experiences with such things as water quality sampling.” The Homestead National Monument of America also has distance learning capabilities, allowing kids to connect from places as far away as Puerto Rico.

Visitors see the entire tapestry of the nation’s homestead experience, from Daniel Freeman’s early claim to that of America’s last homesteader, a young Vietnam veteran and native Californian named Kenneth Deardorff, who filed a homestead claim on 80 acres of land on the Stony River in southwestern Alaska in 1974.

While the homestead act may have ended, the spirit remains. “People are looking for a connection with the land,” says Robert Marcell, historian for the Homestead National Monument. “Like the pioneers before them, many Americans are interested in living off the land and being self-sufficient.”

"It goes into a spiritual realm where the land and the people are connected...".