One doesn’t usually think that retirement can be the start of an adventure, but that’s what it was for John and Judy Burton. When John sold his heating and cooling business and Judy quit teaching in 2006, they immediately drove to Glacier National Park in Montana, where they lived and worked that summer. They gave little thought to  the 4.6-acre farm they left in Jefferson County, Alabama—and little thought to the handful of blueberry bushes they had planted three years earlier.

And then their son called. It was June, and he was excited—the blueberry bushes were loaded with berries, so many he could hardly believe it. The branches were heavy with blueberries, almost touching the ground. “He said we had to plant some more,” says Judy. It was all news for John and Judy. They had never picked a berry, wisely choosing instead to pinch blossoms each spring to let the plants put all their energy into plant growth.

When the couple got home, they took their sons advice, “got serious” as John says, and planted enough blueberry bushes to bring their total to 465. John dug a well and installed a drip irrigation system. It must have been a busy year—they lived in an Airstream trailer while they restored the old farmhouse that had been Judy’s grandparents. “I was still full of energy and vinegar,” says John, words that cause their grandchildren—Ethan, 6, Savannah, 8, and Ben, 11, to giggle and laugh.

Today, just a few years after retirement, the Burtons are now farmers. Whenever they walk out their back door, they can’t help but be pleased with their work. Spread out on a hillside less than a hundred yards away, row after row of large, lush blueberry bushes stand in order, each line of plants separated by wide strips of mowed and trimmed grass. “We take pride in the appearance,” says John. It’s all part of the experience of being on the farm. 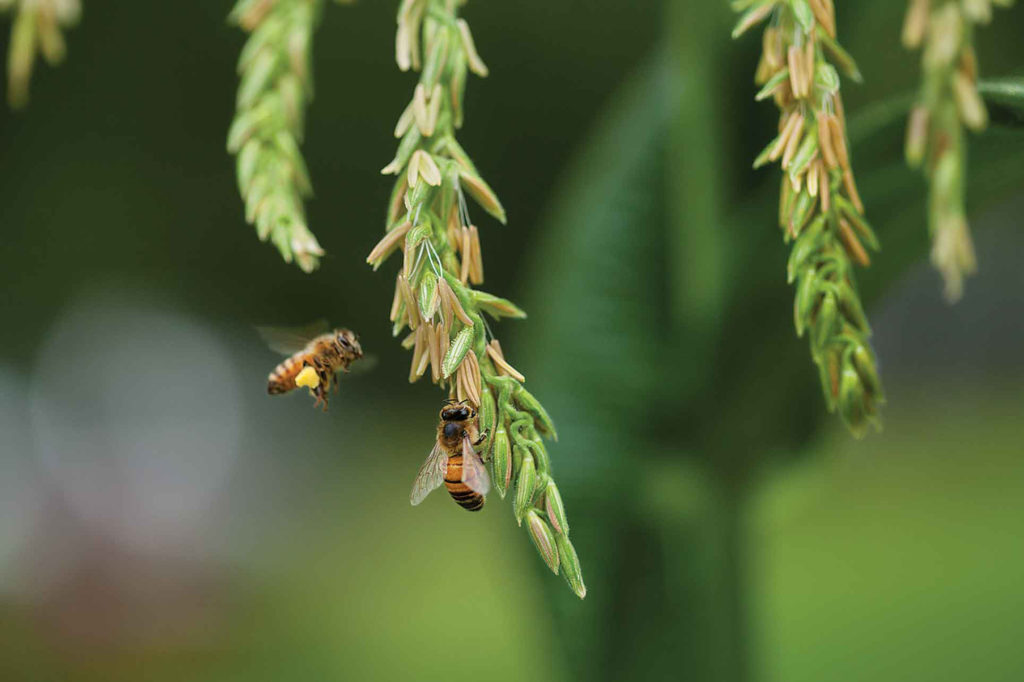 Honey bees make for a natural fit for the farm. There’s plenty growing here for the bees, including corn tassels on the patio.

Sharing the country life. On any day in June and July—except for Sundays—they welcome pickers to come and fill gallon buckets with berries, both blueberries and blackberries, and the Burtons have many reasons why they find so much pleasure in this. Money is not one of them. They do make some money, but it’s insignificant to what’s really important. This is more about making friends and sharing their life on the farm.

The time for harvesting berries is long, thanks to the six varieties John and Judy planted, stretching for the six weeks between early June and early August. When visitors come, John has just one message for them as he hands out gallon buckets: go, have a wonderful time, and pick lots and lots of berries. “We want them all gone,” John says. Fill the bucket, he tells them, and then pile them up as high as they can. As people are picking, he cares little that everyone—everyone—strips an occasional handful off the bushes to enjoy on the spot.

The berries are a bargain at a price of $15 per gallon, and rounding the top is a bonus. “The extra quart is on us,” says John. And neighbors can walk over to get all they want for free—a way of saying thanks for putting up with some extra traffic on the gravel road they share.

John tells pickers that it’s best not to wash berries before freezing. Also, don’t wash after thawing. “Why bother?” he asks, then smiles. “You’ve been eating them all morning straight off the bush.” It’s safe; John uses no pesticides, no chemicals, and the berries have already been cleaned by rainwater and dew. “We’re not organic, but we’re close.” 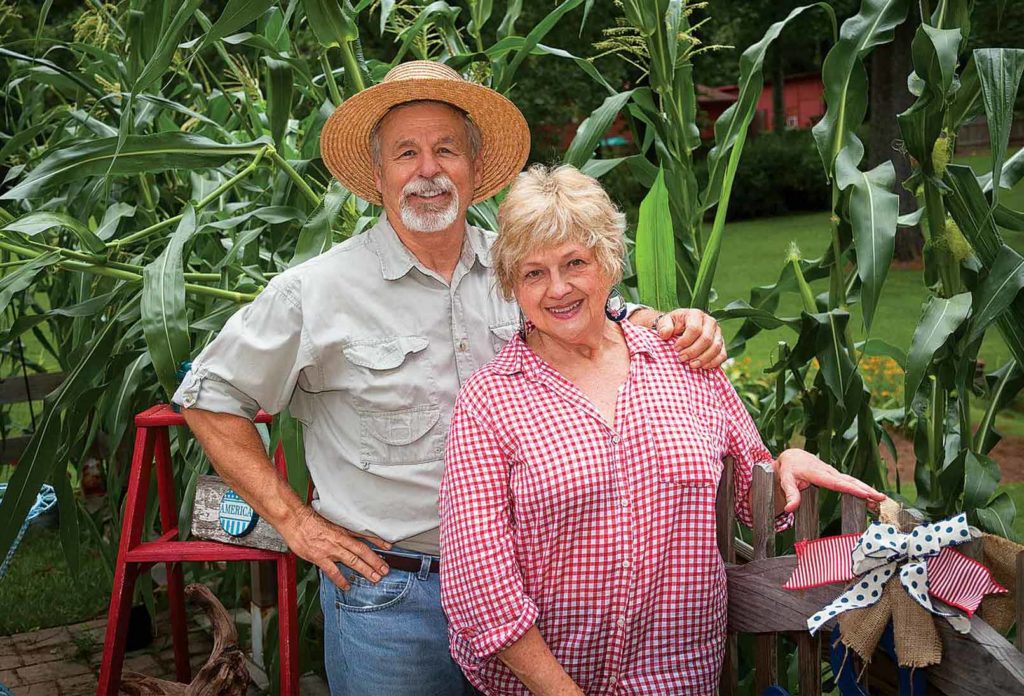 While Jack and Judy Burton enjoy their small farm, they get just as much pleasure in seeing visitors come and enjoy the country life.

People who come to pick vary, but often it’s young mothers with children, where mothers can enjoy peace and the gentle sounds of nature while children run and play on the grass pathways. Trailing and hunting the dozen or so chickens pecking about are a favorite focus for the children, as is the neighbor’s puppy. College kids from nearby Birmingham, Alabama, come out too, says John. “They’re looking for something to do, something different. Students will bring their dates and sit in the swing on the lawn.”

John and Judy call their farm Judy Bee’s Honey and Berry Farm. John says the honey was an accident. “When my brother-in-law removed some wild honey bees from someplace, he asked, ‘How would you like some bees?’ I said, ‘No, I don’t,’ and he said, ‘It’s too late. I’ve already moved them and set up a hive behind your house.’ ”

But the honey has proved to be a good fit on the farm. John and Judy now have 30 hives and get 60-80 pounds of honey per hive. They sell it for $6 a pound. “Local honey is in demand,” says Judy. “Our markets are flooded with foreign honey, and people want something local because of its health benefits. People are calling us constantly.” But by the middle of July, they are always sold out. 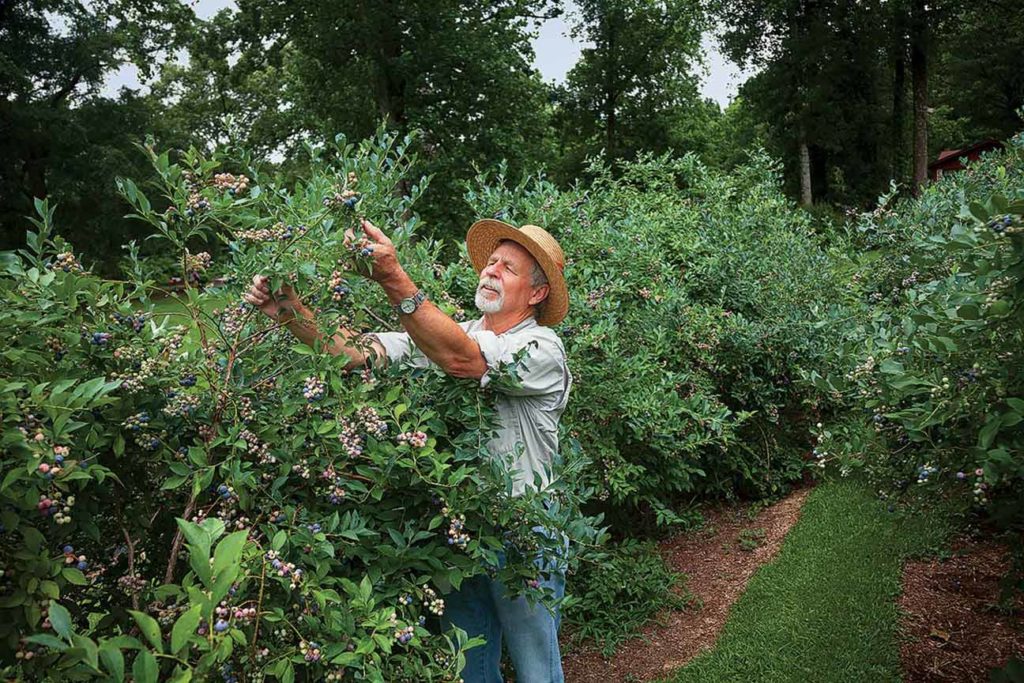 John and Judy are both well versed on growing and eating blueberries. How does it all happen? John says articles on the internet have been good, but nothing compares to advice from Extension agents. “They were more than helpful. They’re wonderful to work with, and we tell that to everyone we can. We followed their advice to the letter.”

The farm might not make this retired couple rich, but it makes them happy to be sharing it with others. “And we do consider this a ministry,” Judy says of her farm and faith working together. “We want this to be a family affair. It’s been a joy having people come and in sharing our lives with them.”

“It’s a problem everyone faces,” John says of retirement. “What are we going to do now?

“Once you retire, you have a choice. You can sit on the front porch, or you can be active.” John says they chose the latter. “It’s amazing what hard work and endurance and pride can do.”