What’s your favorite campfire food? Most prefer classics like perfectly cooked golden marshmallows, roasted hotdogs, or the gooey, sweet, stickiness of a s’mores. Everyone who has ever sat around a campfire has likely cooked one of these. However with a bit of creativity, a few utensils and an economy size roll of tinfoil, Vicky Wallace, a Ranger Guide leader with the Girl Guides of Canada in Toronto, Ontario, says it’s possible to cook almost anything you can imagine.

“There are three ingredients in a classic s’mores: graham crackers, marshmallows, and chocolate squares,” Wallace says. “Place the marshmallow on a roasting stick and toast it. Cook it until it’s a nice even golden brown color all the way around, including the tip. Once it’s all soft and gooey in the middle, you basically make a marshmallow sandwich using the graham crackers and chocolate.” 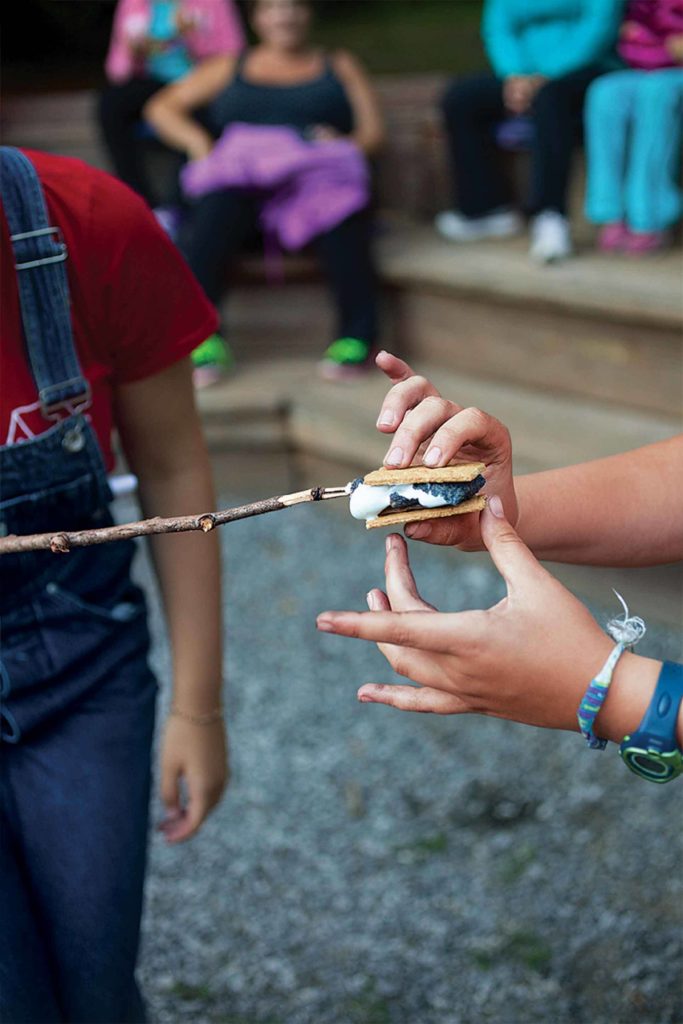 Most people start with the simple classics like hotdogs and s’mores when making campfire foods, but with enough tinfoil you can cook almost anything .

S’mores variations. However you don’t need to stop there. Alternate recipes substitute chocolate-coated digestive cookies for the graham crackers or utilize mint chocolate or Skor chocolate bar pieces. Still others coat the cracker with peanut butter.

Traditionally each person cooks their own marshmallow for their s’mores. However that doesn’t have to be the case. It’s possible, Wallace says, for one person to toast a lot of marshmallows in a hurry for a group of hungry children by cooking a batch
at once on the sterilized tines of a garden rake.

“I can tell you that when I was a camp counselor that I had to acquire the fine taste for burnt marshmallow,” Wallace says. “Young children get very upset when they burn their marshmallow. But you can peel the burnt outer layer of off and eat it yourself and let the girl can try again.”

Girl Guides volunteer Rena Kaplansky brought her young daughter Lily to a mother-daughter outdoor cooking workshop she was helping with at Camp Woolsey near Ottawa, Ontario, in August, 2016. Kaplansky, like Wallace, has also been involved with the Girl Guides since she was a young girl. Camping is still her favorite activity.

“I don’t often prepare a full meal over a campfire,” Kaplansky says “If I’m doing that I would prefer to cook it in a pot over a camp stove. Desserts though are a different story. My favorite is banana boats. Cut a slice out of a banana, fill it with chocolate and mini-marshmallows, wrap it in tinfoil, and place it in the campfire until the marshmallows and chocolate chips melt. I just love them!” 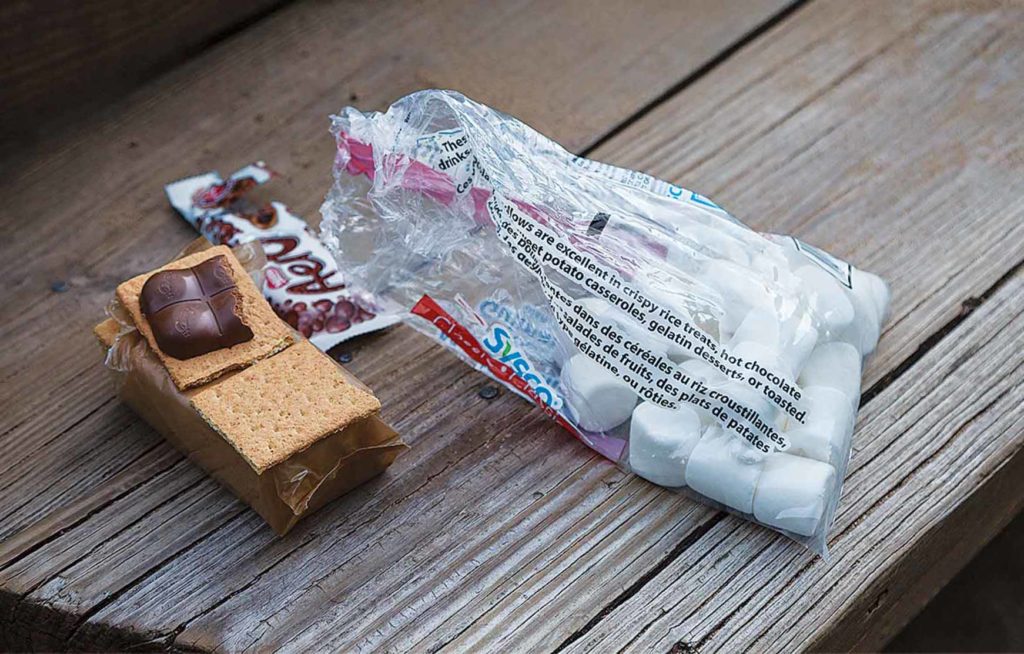 Building a fire. It’s important to do your preparation work ahead of time if you are planning on having a campfire, Wallace says. Make sure you have fine tinder on hand; the soft fluffy material like crushed pine needles or dry grass that you need to light the fire. Next make sure you have enough kindling, pieces of wood smaller than your finger that will easily catch fire and burn. Finally have wood available in a variety of sizes ranging from finger size, wrist size and all the way up to bigger logs that will sustain the fire. She recommends having double or triple the amount of wood on hand than you think that you will need.

The tinder and kindling is placed in the center of the fire and then the fire structure is built around it. There are a number of traditional methods that can be used. The most popular ones are the teepee, the log cabin, and the fire trench. Always make sure you have either water or sand on hand so you can douse it in a hurry if it gets out of control.

“Remember that fire burns up,” Wallace says. “Place the tinder at the base of the fire and light the bottom so everything above it will catch fire.”

It’s preferable to cook over a bed of hot coals rather than over open flames. The temperature is more constant, and there is less danger of your food—or your sleeve—catching on fire.

Just because you are cooking outdoors doesn’t mean that you should ignore the basics of food safety, Wallace cautions. Food poisoning can really ruin your day, so have soapy water on hand so you can wash your hands frequently when you are handling food. Watch out for cross-contamination; don’t put cooked meat back on the same plate you had the raw meat on. Avoid mistakes like slicing your tomatoes with the same knife you just used to cut up raw meat.

If you are on a camping trip make sure any perishable food is stored at safe temperatures, under 5°C (40°F). This is nearly impossible to do for extended periods of time without having access to electricity for refrigeration. 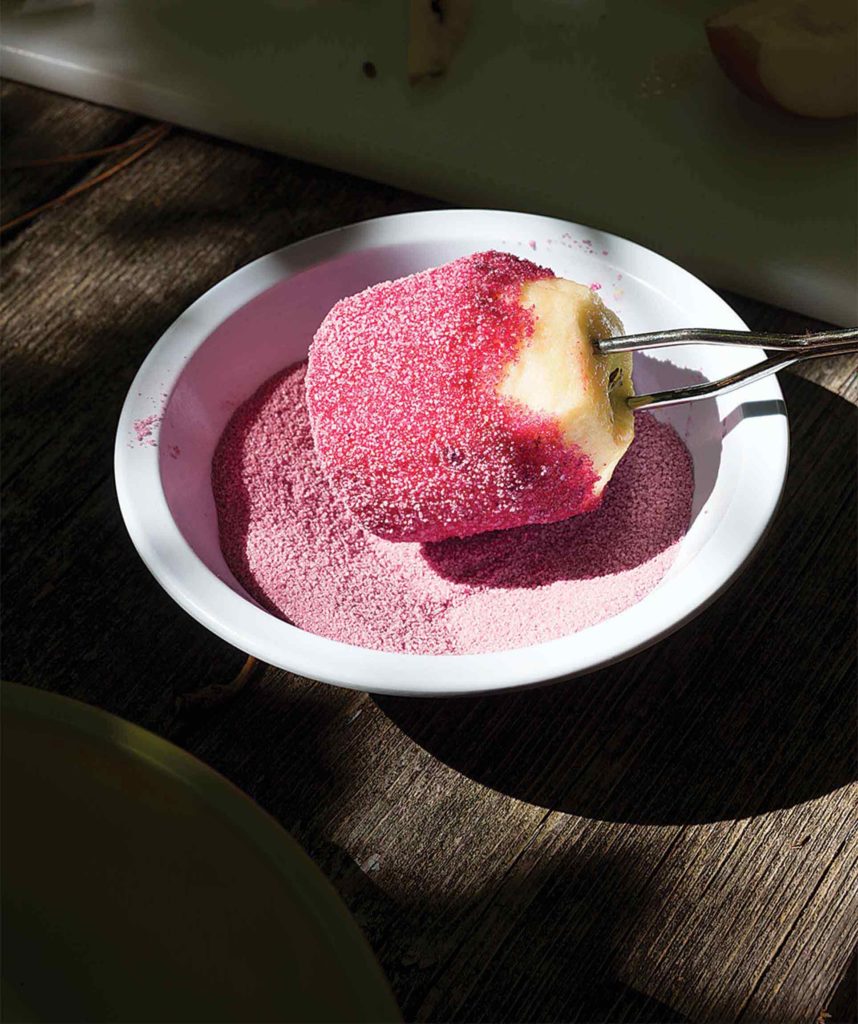 Candy apples made by rolling a peeled apple in a drink crystal mix were the most popular food at the Girl Guides workshop.

“Take a layer of tinfoil, line it with a layer of wet newspaper for extra insulation and then cover this with a secondary layer of tinfoil,” Wallace explains. “Next place your meat along the bottom and then put a vegetable like beans or carrots on top of that. Cover them with sliced potatoes along the top and add your seasonings. Roll the foil down the middle and wrap up the ends and place it in the coals. Depending on what you are cooking, your meal could be ready to be eaten in as little as twenty minutes.”

You can even do baking outdoors by building a box oven. Line a heavy cardboard box, such as a paper box, with tinfoil. Place a pie plate inside containing coals or charcoal briquettes. Use a few pop (soda) cans to build a rack and set whatever you are planning to bake on top of it. Then seal it with the tinfoil-lined box lid and let it bake. It’s easy to find box oven designs and cooking tables on the internet that tell you exactly how long you’ll need to cook different types of foods.

If you don’t want to get that complicated you can buy or build a reflector oven too. Kaplansky used one to demonstrate how to make pineapple upside down cakes over a fire.

“Take a little baking pan, put pineapple rings out of a can at the bottom then pour a white cake, over the top,” Kaplansky says. “Then put it in the reflector oven and wait about twice as long as the instructions say on the package (compared to a conventional oven). It’s really very simple.”

The most popular food with the girls who took part in the campfire food workshop, though, was the candy apple. Just gnaw or cut off the apple’s peeling, place it on a roasting stick and roll it in either drink crystal or Kool-Aid powder. Cook them over the fire like a marshmallow until the sugar melts. They’re simple, easy, and, as the Girl Guides will attest, oh so incredibly tasty.

The Occasional Photo: Balloons Over Yampa

A look at some of our favorite photos from past issues.