Crackles punctuated the windy breathing of the fire, flames snaking through the ground cover and creeping up broken stumps. Yellow-clad firefighters walked among the lines of flame, their battered red drip torches drooling gobs of flaming diesel and gasoline.

The woods were bound to burn anyway — like all forests, they are always just a lightning bolt or unattended campfire away from bursting into flame. The fire crews lighting the 40-acre parcel of Oregon mountainside on a cool spring day were engaged in a preemptive strike, burning fuels in a controlled process to minimize the chances of a much hotter, more destructive wildfire blasting through later.

Matter of when. Firefighters don’t talk about “if” a wildfire will claim a forest or grassland; they talk about “when.” Last year, 67,595 wildfires burned 5.5 million acres in the U.S. That’s a big number, but 2016 was actually a light year — on average, 73,000 fires burn 7 million acres of federal, state and private land each year. In Canada, 5.25 million acres typically burn annually in 8,000 fires.

Fire is a natural part of the landscape, sometimes just consuming sick or dead vegetation, other times clearing the land and beginning the process of succession again. The result, for millions of years, was a constant ebb and flow of habitats. Ground cover sprouted, nourished by the nutrients reclaimed from the ashy remains of the plants that burned. Forests rebuilt themselves. Animals grazed the clearings and hunted along the forest’s edges.

Then came people and houses, unable to move away from fire and too rooted to go with the flow.

Today, 99 million Americans — about one-third of the population — live in what disaster planners call the wildland-urban interface at the edge of undeveloped land where wildfire is a big risk.

Standing between those people and disaster is a thin line of brave, dedicated firefighters who put their lives at risk each year to manage fire. 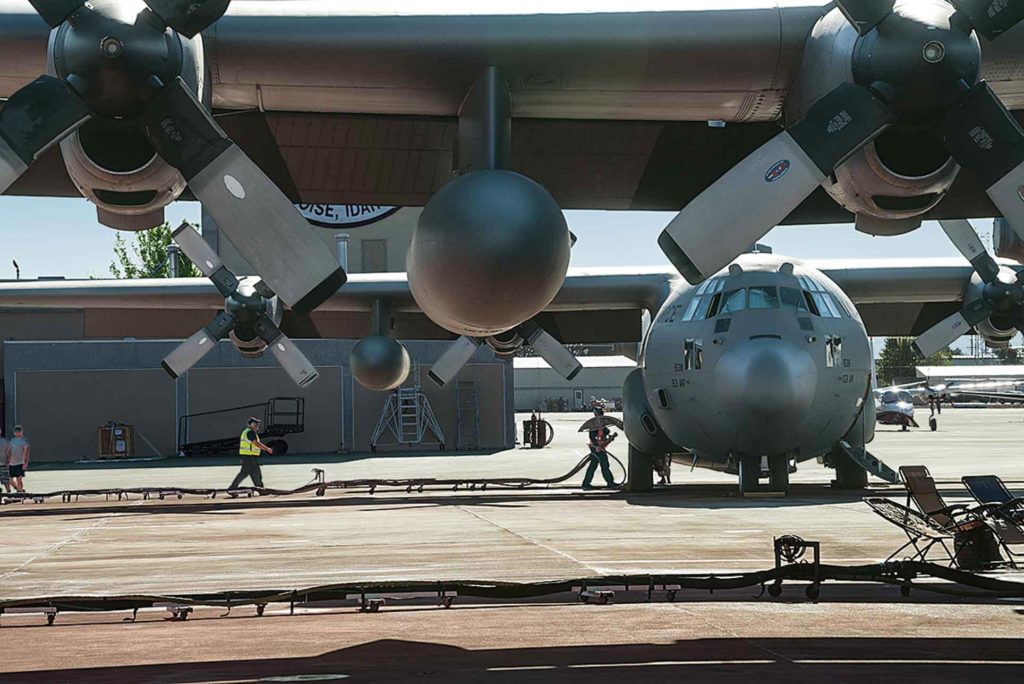 If the firefighters conducting the controlled burn in the mountains above Ashland, Oregon, are like peacekeepers in the war against wildfire, then the shock troops are the smoke jumpers who parachute into the back country, the helitack crews who buzz in on choppers to remote strikes, and the 20-person hotshot crews that hike to the front lines.

Front lines. Jessica Gardetto is deputy chief of external affairs for the Bureau of Land Management’s (BLM) National Fire and Aviation operation. But her career started on the fire line, working
on an engine crew in Idaho and eventually joining a helitack team. A collegiate track athlete, Gardetto thrived on the challenges that started with the grueling “pack test” that every wildland firefighter
has to conquer — hike three miles in under 45 minutes with a 45-pound pack on your back.

“It’s a very physical job,” Gardetto explains. “I’ve noticed a lot of track athletes work in fire. You’re constantly moving all day long, 15 hours a day. If you’re on an engine crew, you’re walking beside the engine, spraying. One day, you’re helping a hotshot crew with water from your engine, and other days, you’re just mopping up all day.”

If any of that sounds easy, think again.

The wildland firefighter’s fundamental job is to dig. The point is to create a fuel-free barrier that stops a fire’s spread. That means uprooting ground cover, grubbing up shrubs, cutting trees and roots, and leaving a clear strip to stop the flames. On a big fire, that digging goes on 15 hours a day, every day, for two weeks before a one- or two-day break.

The basic unit on the line is a 20-person crew. Crew members on the front lines rely on their Pulaskis, a fearsome instrument with a conventional axe head on the front side and a mattock blade, perpendicular to the axe head, on the back. Swinging a Pulaski, a firefighter can chop, grub, or trench. 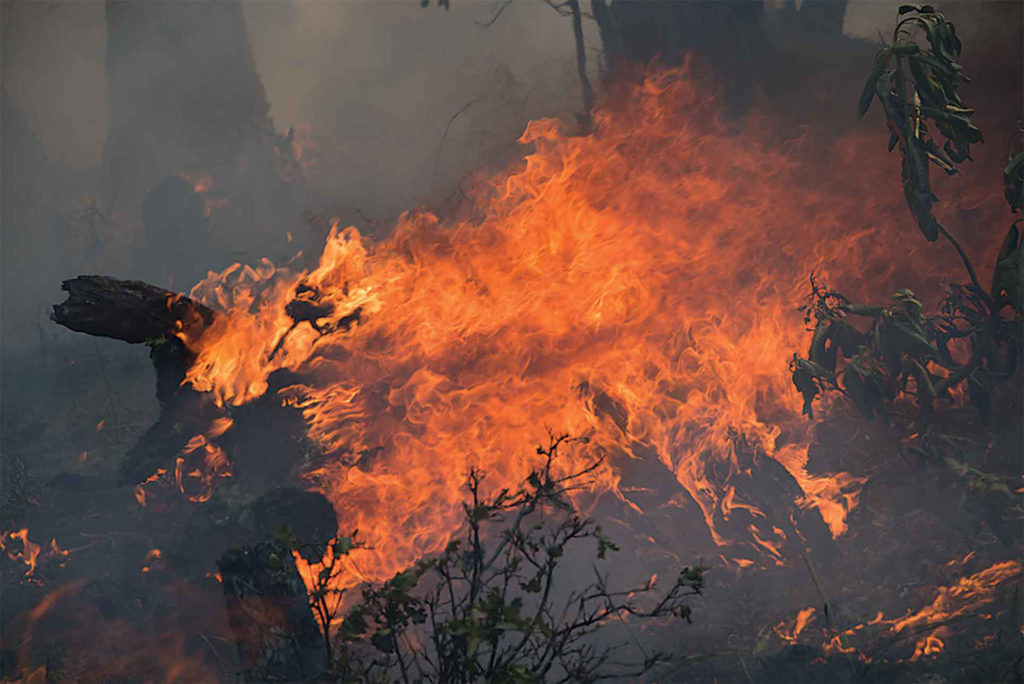 The intensity of controlled burns can be managed to achieve specific ecological objectives.

Behind the Pulaski team are firefighters with combi tools, which would be familiar to any infantryman who ever had to dig with a collapsible shovel/pick called an entrenching tool.

The rest of the crew follows with McLeods, a hellish rake with steel teeth as wide as your finger and a razor-sharp chopping blade across the top.

Once a line is built, specially trained hotshot crews can burn the fuel behind it to widen the clear zone, quite literally fighting fire with fire.

“If the fire’s in the crown of the trees, you’ve got to make a fire line as wide as the trees are tall,” Gardetto explains. She adds that massive fires can require bulldozers to widen fire lines to 100 yards or more. Even then, hot-burning infernos can throw embers and flaming chunks of fuel for miles, jumping the line and igniting new spot fires downwind.

Changing tactics. After a century of fire suppression led to aging forests and massive buildups of fuel, firefighters changed their strategies.

“We can’t directly attack a lot of these large forest fires because it’s too risky,” Gardetto points out. “When a wildfire becomes so large that it’s creating its own weather, it’s too dangerous to put firefighters directly in the path of the flames, so we have to find a way to indirectly attack these fires.”

“We started realizing we could do something called ‘indirect attack,’” she notes. “It’s more, ‘Let’s come up with a long-term strategy for putting this fire out or protecting people’s houses.’ We look for rock outcroppings, rivers, or natural breaks. We try to herd the fire rather than making a direct attack.”

“Going in by helicopter seemed to be a lot better way to get to a fire than walk half the night and not find it,” Kerns says with a smile. “All you’ve got to do is, ‘there’s the smoke, drop your rope.’ ”

He says the pay and free food on the job attracted him first, but quickly admits there was more to it.

“There’s really not enough money to pay you to do all that work,” he says. “You do it for the view.”

Last summer, Kerns was at the National Interagency Fire Center (NIFC) in Boise, Idaho. In front of him, a Wyoming Air National Guard crew was pumping 3,000 gallons of fire retardant into a C-130H Hercules, a cargo aircraft specially fitted with a Military Airborne Fire Fighting (MAFF) system. Using air compressed to 1,200 psi, an operator next to the tank can discharge the entire load in a  5-second, half-mile drop, or meter out the spray to cover nearly a mile. Last year, three MAFF planes based at NIFC delivered nearly 400,000 gallons of retardant in 165 sorties around the region. 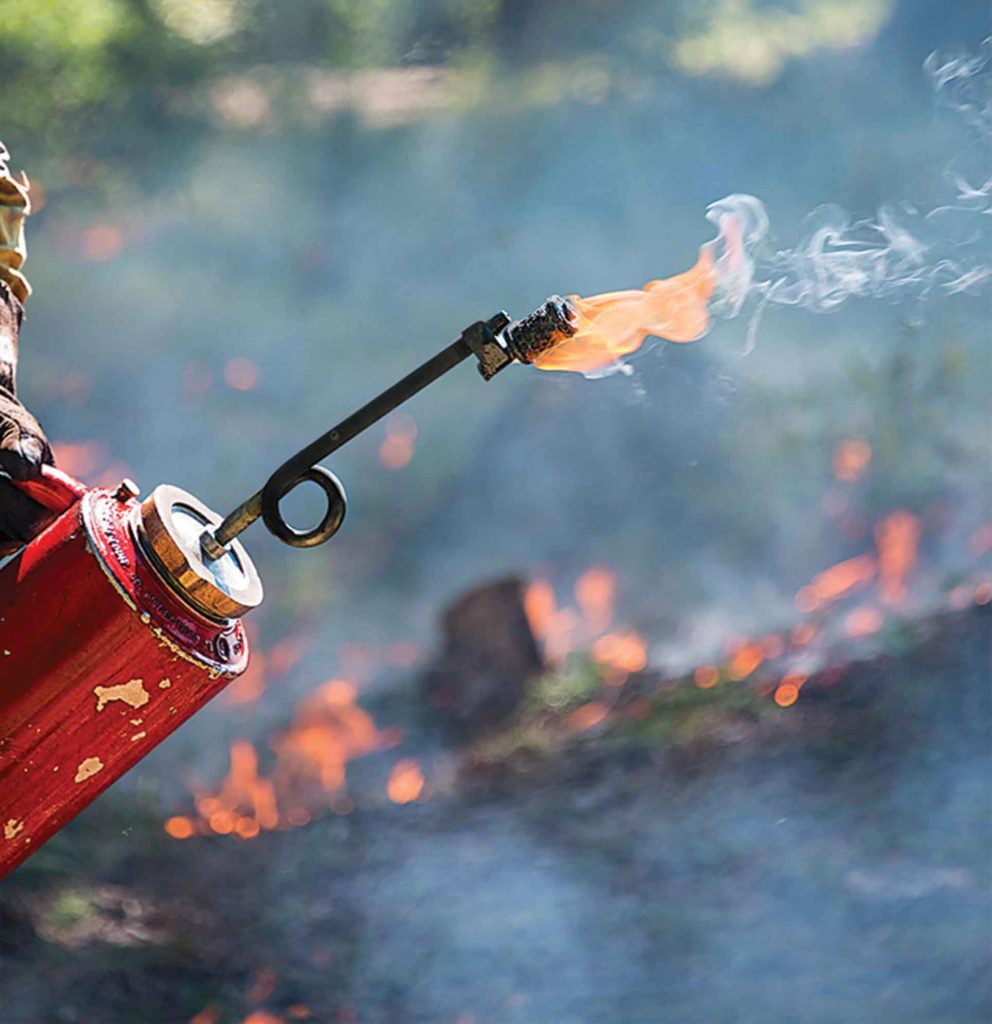 The loop in drip torch tubes prevents “flashback” into the tank

In contrast to the rush to fill the C-130 on the runway, the smoke jumper building next door was dead quiet. A steerable ram-air chute — the kind precision parachute teams use to loop into football stadiums at halftime — was stretched out on a long table, ready for its user to pack it for deployment. Behind it, a line of sewing machines allowed each smoke jumper to make his or her own repairs.

BLM smoke jumper Ivan Smith says Boise’s 72 parachutists were all in the field, working from BLM and Forest Service bases throughout the West.

“It works best when we go to our established bases, but our mantra is we can set up anywhere with Jet A [fuel],” Smith says, checking a whiteboard that marks the locations of his team members.

“Our interoperability between the two organizations — Forest Service and BLM — makes it so we can plug bodies into planes,” he adds. “It doesn’t matter what base a person comes from.”

Coordinated effort. NIFC is all about interoperability. Its coordination center is staffed by nine agencies—BLM, Forest Service, Bureau of Indian Affairs, National Park Service, U.S. Fish and Wildlife Service, the Federal Emergency Management Agency, and the National Association of State Foresters. While the Wyoming crew loaded the tanker last year, Center controllers tracked the activity of more than 11,000 firefighters in the field.

Beneath a map of the country and a big-screen TV tuned into a news station, fire specialist Jeremy Sullens conducted one of several briefings that day, running down his team’s predictions of how fires around the country were expected to behave.

Chuck Wamack stood in the back. As assistant control manager for the Center, the BLM logistics expert listened for hints on his next challenge.

Wamack’s specialty is creating pop-up cities in the wilderness to staff firefighting efforts. That means trucking, flying, or barging in thousands of tons of equipment, from Pulaskis to propane, radios pre-tuned to the same frequency (which requires coordination with the Federal Communications Commission and Department of Defense), drinking water, and food for thousands of people on the line.

“You want a thousand people in a camp by the close of business tomorrow? We can do it,” he says. “We feed up to 1,500 people three meals a day without infrastructure. They’re not on water, sewer, electricity. They have their own capabilities.”

Wamack’s work — eagerly studied and emulated by military logisticians and private companies —makes him an unsung hero, far beyond the limelight.

“If you’re on a fire, you don’t care how it happens,” he says. Then the phone starts to ring.