Blooms of muted purple, cheery yellow, bright magenta, and every color in between slash brilliantly hued swaths across the landscape drawing the eye from field to the looming backdrop of McCleud Mountain. Native bees of every shape, size, and color zip from flower to flower while Rebecca Shoemaker and Bryce Christiaens inch along on hands and knees deftly plucking weeds from among cushion buckwheat.

The tiny, ground-hugging plant is just one of 28 native wildflower species the couple have painstakingly gathered and—through trial, error, and sheer stubbornness—propagated into crops they can harvest and sell from their small but colorful Arlee, Montana, acreage.

When Christiaens was in college at the University of Montana, his main drive was land restoration work. For one of his studies he established native plant communities on a 2.5-acre field with the intent of introducing invasive species to test the theory that a more diverse plant community would be more resilient to invasion. After all his hard work, he was hesitant to purposely destroy the beautiful plant community he’d established.

“It was really hard to find seed with native wildflowers. Grass was easy because it’s used in a lot of restorations, but forbs were way harder to find,” he says. “It seemed like a good niche for a business.” 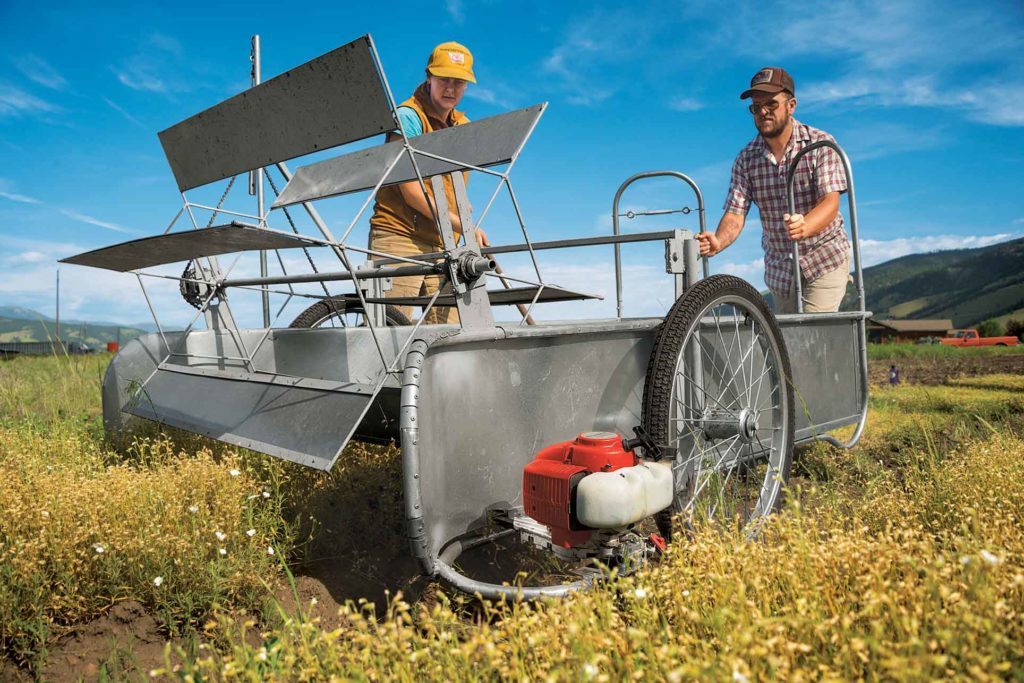 A custom hand-pushed swather is one of several inventive harvesting tools.

Shoemaker initially studied wildlife, but a class called Rocky Mountain Flora helped her realize plants were her passion, leading her to a second degree in botany. Between the two, there was enough knowledge and enthusiasm for plants to give the idea of growing native wildflowers for seed a try.

Seeking seed. Gathering seeds was the first step. Starting in 2005, Shoemaker and Christiaens would take to the mountains around Missoula to search out various flower species.

“Hiking with us is really boring,” Shoemaker laughs. “We spend a lot of time standing in one place looking at seed pods.”

They meticulously collected seeds recording information such as the number of plants at the site, how far between individual plants they were collecting and many other parameters. Genetic diversity was important, so their goal was to collect seeds from at least three different healthy native plant populations that were at least 2 miles apart.

When it came time to grow their wildflowers real estate was an issue. “We tried to lease land, but most of the species we wanted to grow take 3 years before they start producing seed. No one wanted to give us a lease that long,” Christiaens says. Instead they purchased a 12-acre farmstead north of Missoula. Their garden served as a test plot small scale planting while they worked out the kinks. As they built seed supply and confidence, they started doing larger seedings until they had 4 acres dedicated to production.

“There were all sorts of bumps,” Shoemaker recalls. “Some seeds required scarification, some needed specific companion plants. We ruled out many species because we needed something that could just be broadcast and grow.”

Christiaens’ favorite wildflower, gumbo primrose, was ruled out early on. It grew well, but was
a nightmare to harvest. “The ovaries are at the base of the plant and were very difficult to get to. We were having to collect seed pods by hand with tiny scissors,” he says. “The worst part was there was a species of ants that really liked those plants. They’d be crawling all over you and they really liked to sting.” 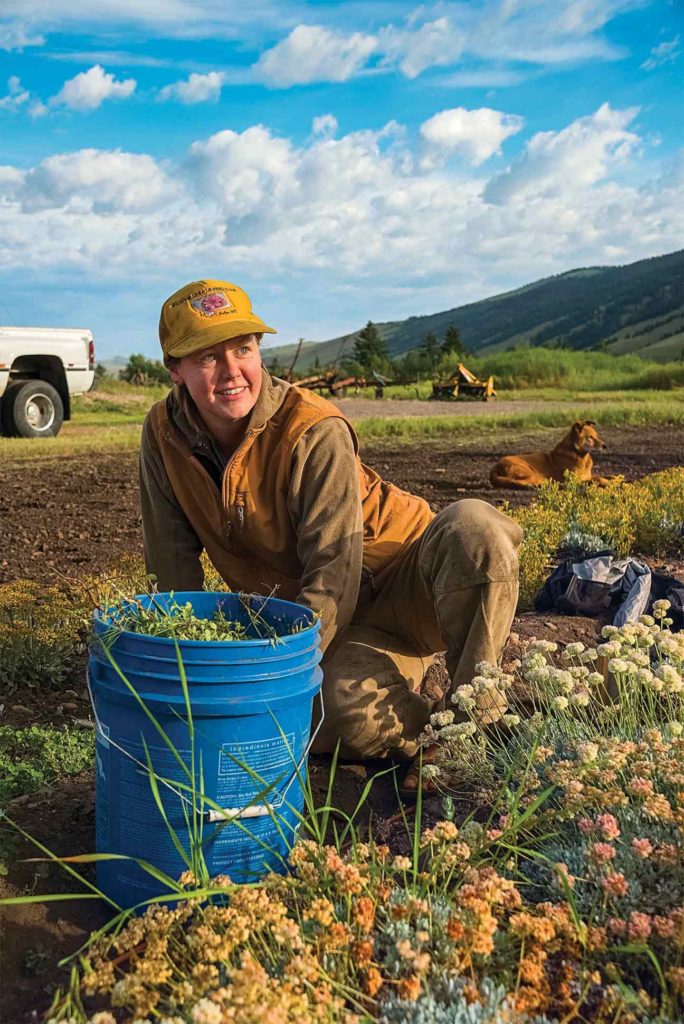 Rebecca Shoemaker discovered her love for plants in college.

They tried around 60 species in small batches before settling on the 28 species they would grow. “A plant had to establish well and be relatively easy to harvest and clean,” Shoemaker says.

Farmer ingenuity. There’s nothing standard about harvesting wildflower seeds. Finding a system that works for each species has been an ongoing puzzle leaving many contraptions littering the shop. Unlike commodity crops, wildflowers haven’t been bred for uniform ripening. While a challenge for harvest, this is a positive for restoration purposes.

“If the genetic footprint is wide enough a fire or frost won’t wipe out every plant,” Chris­tiaens says. As a result, they harvest some species over a 2- to 3-week period. For one of their species, Clarkia, they initially harvested with shearers, dropping seed pods into a bucket. Then they added a fin to the shearers so the pods would drop into a tote, but it was still a back killer. An upgrade to a hedge trimmer with a burlap sack attached to the trimmer bar was a help, but the final answer was a custom hand-driven swather. The contraption looks like a square wheelbarrow on bicycle wheels with a motor-driven cutting bar and paddles on the front. Christiaens wheels it down a row collecting the cut plants in the wheelbarrow portion. As it fills, they stop and transfer the plants to a garbage can for processing later and sweep up any seeds that have shelled into a dust pan.

Plants with seeds designed for wind dispersal, like the awned seeds of dandelions, get their own unique harvest treatment.

“We first harvested them with a shop vacuum. You felt a little crazy out there vacuuming the field,” Shoemaker says. And it got even more ridiculous as they scaled up. “When we got upwards of a quarter acre you would be vacuuming all day and by the time you were at the end there was more seed ripe at the beginning.”

They eventually manufactured an intake for a tractor-mounted vacuum normally used for picking up leaves. That still didn’t solve their next problem—cleaning seed. “That was a trial in and of itself,” Christiaens says. “We have used hand sieves, blowing on seed to get the chaff out, letting the wind blow the chaff out, all these methods that are straight up 18th century means of seed cleaning.” 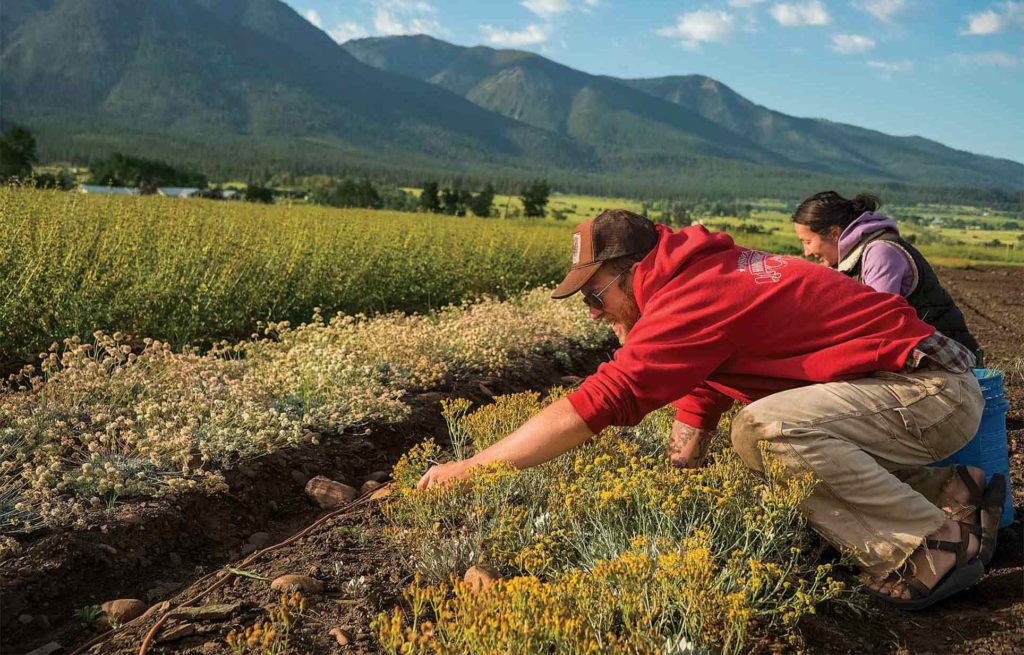 Bryce Christiaens hand weeds a row of flowers, a task that consumes countless hours throughout the growing season.

Growing strong. While the processes of their seed endeavor will always be a work in progress, they’re getting the job done and their colorfully packaged seeds are growing in popularity.

“When we first started, a lot of people wanted the seeds locally for their landscaping. There was a lot of pride simply in having native plants in their beds,” Christiaens says. They also provide some pride in being a better landscaping option for the environment. “These plants are adapted to the conditions we have in the arid west. They take less water overall and don’t have to be watered or fertilized to get a beautiful plant. They also attract a ton of pollinators including bumblebees, honeybees, native solitary bees, ants and even moths. It’s always interesting to see what shows up in the field.”

They’ve had to do a lot of education about how to use their seeds. Native species are best suited for fall seeding, as seeding would happen in nature.

“It’s hard to convince people they can plant these seeds when there’s snow on the ground and they will grow in the spring,” Shoemaker says. “We really push them as Christmas gifts because you can even seed them in winter.”

Despite challenges and very labor intensive work, Christiaens and Shoemaker seem to really enjoy the process. It’s hard to complain when your office is a field of wildflowers.

"Through the years, all these colors mixed together and became what's known as Appalachian music...".