Training the South’s most famous flock for their walk of fame.

Memphis is the city of Sun Records, soul music, and the Beale Street blues. It’s also home to one of the South’s stranger traditions: the March of the Peabody Hotel Ducks.

The story is familiar to anyone who’s seen the web-footed VIPs on Oprah, or admired them in their elegant fountain pool. On any day, if it’s 10:45 a.m. in Memphis, hundreds of children and adults are crowded onto the hotel lobby’s sofas and chairs, or pressed against balcony railings waiting for the march to begin. As John Philip Sousa’s “King Cotton March” starts, an elevator opens and out prance five mallards – a drake and four hens. They sprint over a red carpet and glide into the fountain, where they spend their day floating around a sculpture of cherubs carved in marble.

Waterfowl were first kept in the fountain in 1933, when a tipsy hunter placed his live decoys in the water while ordering a drink at the bar. Eighty-four years later, ducks are still a part of hotel life.

Ready for their close-up. The parade that takes a minute to complete requires several days of training to set up. Getting the aquatic birds performance-ready is the responsibility of Peabody Duckmaster Jimmy Ogle. It’s a nuanced job. Ogle is a valet — he showers the mallards in the morning, changes their water daily, and does turn-down service at night; he’s their footman — breakfast is a half bowl of poultry pellets, sprinkles of soy meal and oyster grits, and 2 stalks of romaine. And, most importantly, he’s their acting coach. 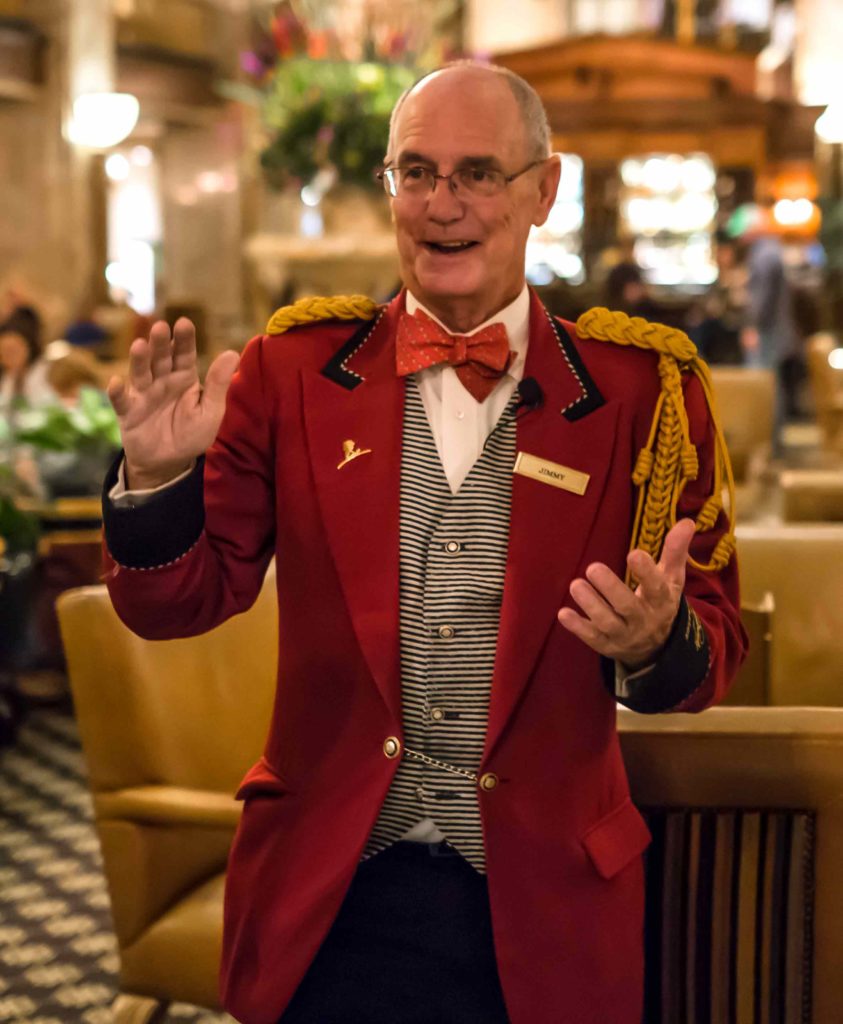 Duckmaster Jimmy Ogle readies his flock. “Like a lot of young ones, when they first arrive they don’t listen to me.”

He inherited the duties from the first Duckmaster, Edward Pembroke, a former circus trainer who held the job for 50 years. Ogle, who donned his first crimson and gold MC coat last fall, is the 6th to hold the post.

The ducks’ tenure is much shorter than Ogle’s has been. After three months, they go back to the farm that raised them. It’s a short stint in a six-or-so-year lifespan. When the one-year-olds arrive at the hotel, wild and wide-eyed, they’re transported 13 floors up to their temporary rooftop digs: a so-called Duck Palace that contains a swimming pool, a fountain, and a spot of turf.

“Like a lot of young ones, when they first arrive they don’t listen to me,” Ogle jokes.

Training starts immediately. “The first time they come out of their palace, they run out together all over the place like they’re one big duck tumbleweed,” Ogle says. “I talk to them, narrating what’s going to happen.” (The farmer has already trimmed an outer portion of their wings so they can’t fly off; it grows back in four months, Ogle says.)

One early lesson is about the nature of clear glass. The passageway to the roof elevator hall has a set of double glass doors. Leaving one closed and the other open, Ogle leads the ducks toward the doorway, warning them, “If you’re not careful, you’ll walk right into the closed door.” The newbies always make the same first choice. “They waddle right up to the glass and bump into it, then start pecking at their reflections,” he says.

Practice for perfection. Once in the hall, they’re allowed to dart around and inspect every corner and piece of furniture. Finally, curiosity spent, they enter the third elevator. “Inside of it, they ball up against each other for protection,” Ogle says. They don’t ride down to the lobby just yet; instead, they march back to their palace and start the practice all over again.

“I do this with them five times on the first day,” Ogle says. “They start loosening up. The next day, we do it 10 times, and the next day 15 times, all of it in 30-minute sessions.” 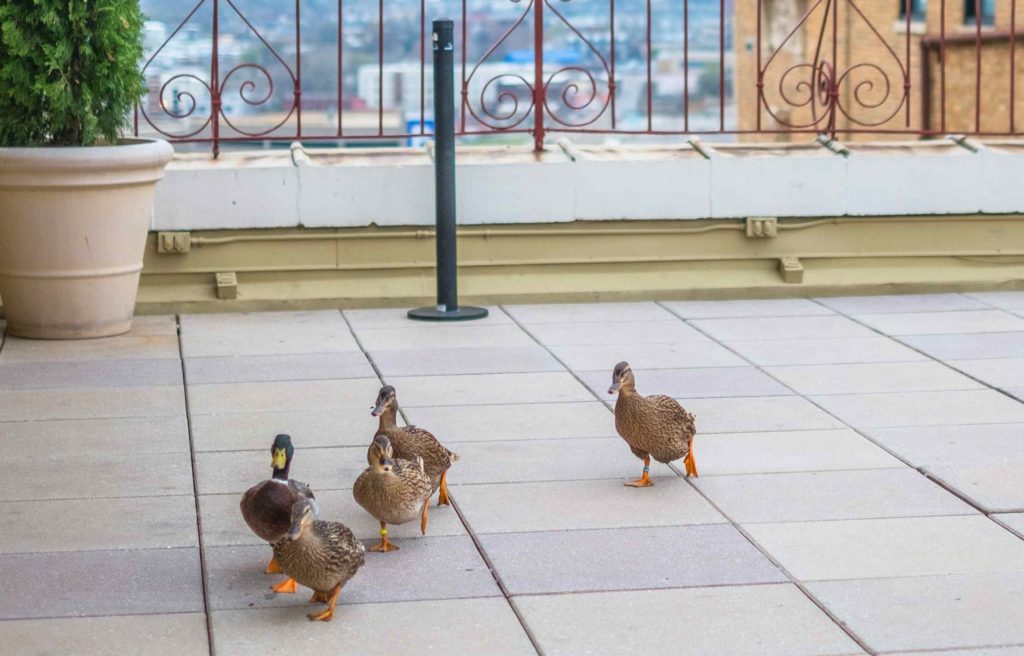 The Peabody Ducks leave their rooftop palace for showtime in the hotel’s lobby.

The fourth day is show time. “It’s a charged moment,” Ogle says. “They’ve never descended the elevator or seen the red carpet. The piano is playing the Sousa march and there’s a wall of little kids.” The doors open. The mallards are center stage. They prance down the carpet and jump up into the fountain. Under Ogle’s direction they do not vary.

“The ducks fear people and they like water,” Ogle says. “The only thing that would scare them is a flashy action or loud sound. Otherwise they’re smart and calm.”

The show’s not over yet. If there’s an Honorary Assistant Duckmaster for the day (Celebrities Oprah Winfrey and Patrick Swayze have filled the spot, but it’s usually reserved by the parents of a child older than age 5), that person lifts a silver-plated hood to uncover a platter of the mallards’ mid-day snack: a half cup of cracked corn. “They don’t have teeth, so they don’t just gobble it up,” Ogle says. “They toss everything into the water.” The fountain is cleaned and the water replaced nightly.

Ogle guesses that more than 250,000 people per year come to the Peabody to watch the duck parade, and more than 1,500 ducks have played the part since the tradition originated in 1933. (The hotel was closed from 1975 to 1981.) “It’s grown to be a great tradition,” he says, “— a little like the Budweiser Clydesdales.”

Before he was Duckmaster, Ogle was a dockmaster down on the Mississippi River’s edge. (“I traded an ‘o’ for a ‘u.’”) His many tourism-related jobs have given him respect for the area’s contributions to America. After he’s tucked the ducks in for the night, when visitors join him on the Peabody rooftop, they’re in for a treat as he narrates some pivotal moments in history inspired by the 360-degree views.

For all of the mallard guidance Ogle has supplied, is there any reciprocal takeaway for him? “Just that I’ve got to think like a duck,” he says.