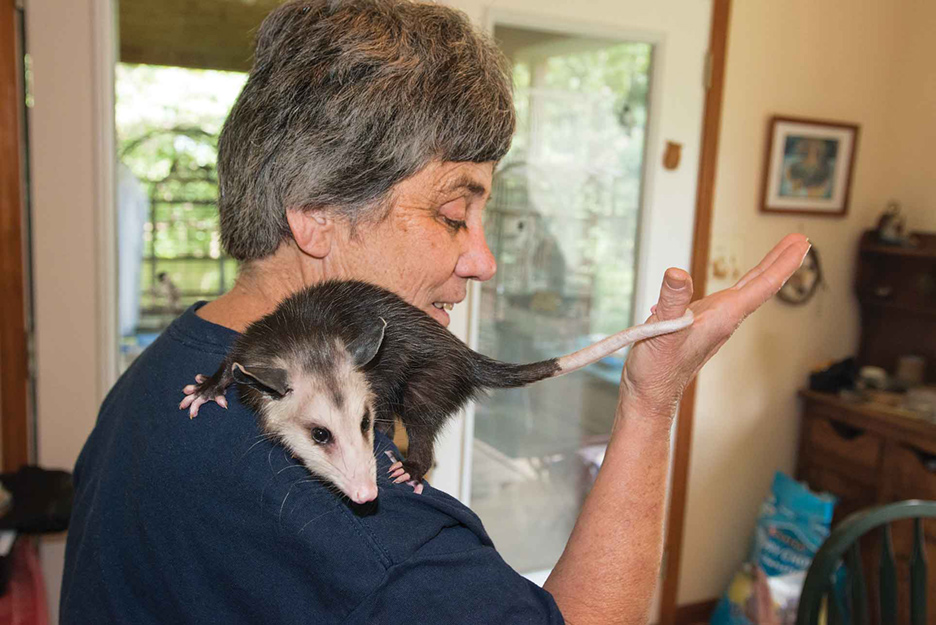 One woman’s mission to return injured wildlife to the wild.

One woman’s mission to return injured wildlife to the wild.

If a wild bird or mammal gets in harm’s way anywhere in Lynne McCoy’s part of East Tennessee, her phone will probably start ringing. Did campers discover a nest in a wheelwell of their RV? Or a deputy sheriff encounter a deceased mama possum with eight very alive babies along the roadside? A tree with nesting owls got cut down by a developer? It’s Lynne McCoy to the rescue.

Since 1973, she’s been the go-to lady for helping troubled wild animals. Licensed by the state as an official wildlife rehabilitator, McCoy’s home in the country outside Jefferson City, Tennessee, hosts possums, rabbits, raccoons, groundhogs, songbirds, raptors, and pretty much whatever else shows up from spring on into fall, her busiest time.

She does it for no pay, funding most of her work with a Social Security check, although she will accept donations to help feed the critters. “My life is about books and animals, animals and books,” says McCoy, who once worked at the public library in Morristown, Tennessee, not far up the road.

These days, in her house located on a quiet rural road, she has several rooms full of wild animals, some of whom seem to not realize they’re wild, crawling in McCoy’s arms and even her graying hair. Her rehabilitation program, however, aims at releasing all of them possible back into the wild. Those injured too badly by impacts with cars or various other mishaps may become part of the programs she puts on at schools and parks in the area.

“As soon as they become self-feeding, they go on a natural diet so they can be released back to the wild. My season for baby animals starts in March and goes through June. From September through March, I tend to get ones that are injured or starved because they haven’t learned how to hunt or are hit by cars. My goal is to return everything to the wild. If they can’t do it, they become wildlife ambassadors in the talks I give,” she says.

No shortage. She cares for about 800 animals each year, all arriving in some state of distress. Her phone buzzes constantly throughout the day. “People find out about me and bring animals to me. A lot of veterinarians know me. There are volunteers willing to transport injured animals they encounter one way or another. I never know what’s going to come in the door next,” McCoy says. 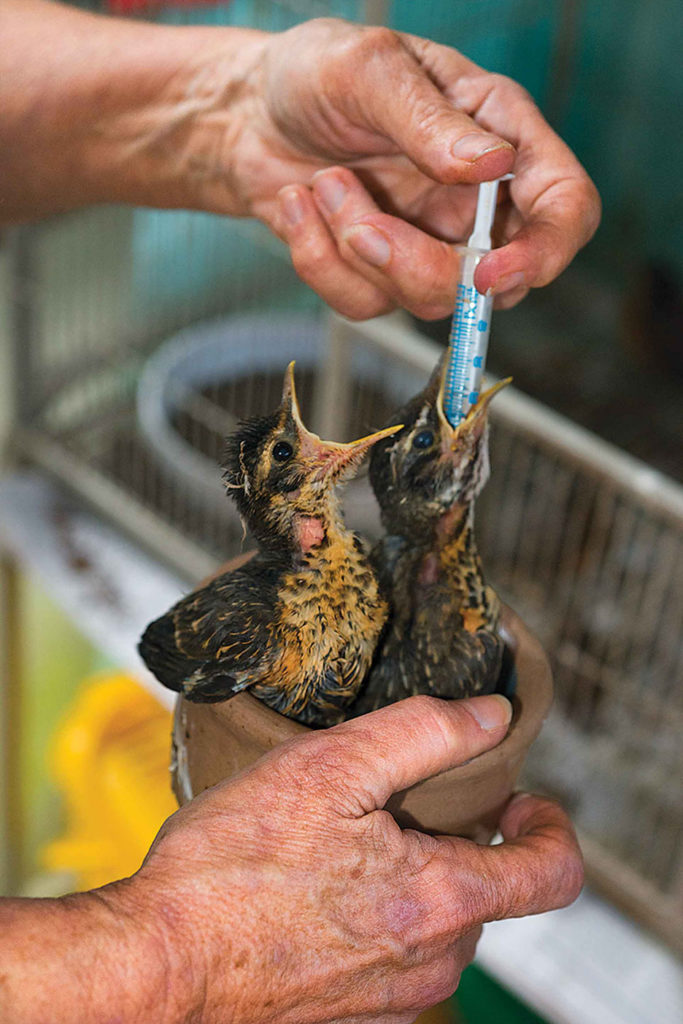 Feeding young robins with a syringe full of food. Baby songbirds must
be fed every 20 to 30 minutes, dawn to dusk.

Caring for these critters is not just warm, fuzzy and fun times. Some animals die. Some must be humanely euthanized. Young rabbits, in particular, have a high mortality rate. Baby songbirds must be fed every 20 to 30 minutes, dawn to dusk.

“Each species has its own diet. What they get is a little surprising to some people. Raccoons get kitten milk replacer with vitamins and some other things. Other species may get puppy milk replacer. Each is a little different. It costs to do the right thing. But it’s the only way to release healthy animals. The mammals have to be fed every two to four hours. The little ones get fed with a syringe,” she says.

She learned the tools of the trade on her own. “I just picked it up. I did lots of reading. There was a book, My Orphans of the Wild, by Charlie Briggs and Rosemary Collett, that taught me a lot, although it’s kind of outdated now. I learned as I went along. That’s how we did it back then,” she says.

Now the National Wildlife Rehabilitators Association, a group with about 1,500 members, offers programs for training and continuing education. “I go to their meetings if they’re close to me. They have speakers about diet and veterinary care, offering all kinds of information. I go and I’m just a sponge taking it all in. Then I go home and see what works.”

Like all licensed wildlife rehabilitators, she must abide by state and federal regulations, and write detailed reports. “I have to outline what the problem was for each animal and what I did for it. My facility has to have an annual inspection by the Tennessee Wildlife Resources Agency,” she says.

A lot of love. That’s a lot of toil and detail for what amounts to volunteer work, but she doesn’t mind. “Like most wildlife rehab people, I do this because I love the animals. It isn’t really a job. It’s a calling. I feel I’m doing my little bit to help wildlife and doing something worthwhile with my life. It’s my role. It’s a labor of love,” McCoy says.

“It’s easy to burn out, and some people do. They get in it and find they’re not working with cute little Disney animals. You have to clean cages. You have to deal with maggots and other not-so-nice things. You have to buy frozen mice in bulk and feed them to the raptors. Some animals are going to die, that’s just how it is. Some people can’t handle it. You just have to do the best you can and make the animals as comfortable as you can. Some can’t be saved. Some need to be euthanized. I’m not a believer in keeping something with no quality of life,” she says.

She remains hopeful that wildlife rehabilitator numbers will increase even with that sobering reality. “We are desperate for more rehabilitators. We need to get some young people involved. It isn’t necessary to do it like I do it. Some rehabilitators specialize in certain species. Some are permitted for deer, which I’m not. Some just have raptor centers or songbirds. You don’t have to do everything if something particularly interests you,” she says.

Follow McCoy as she goes through her daily chores and you see that she moves quickly and efficiently from cage to cage, animal to animal. She and her husband, David, were building this nice home next to the forest when he was diagnosed with cancer and died in 1998. The well-lit home is now set up with incubators and easily accessible cages.

She quickly mixes rations for the various animals, pointing out the charms of some. “Just about any animal is interesting, even possums, which some people find surprising,” she says. 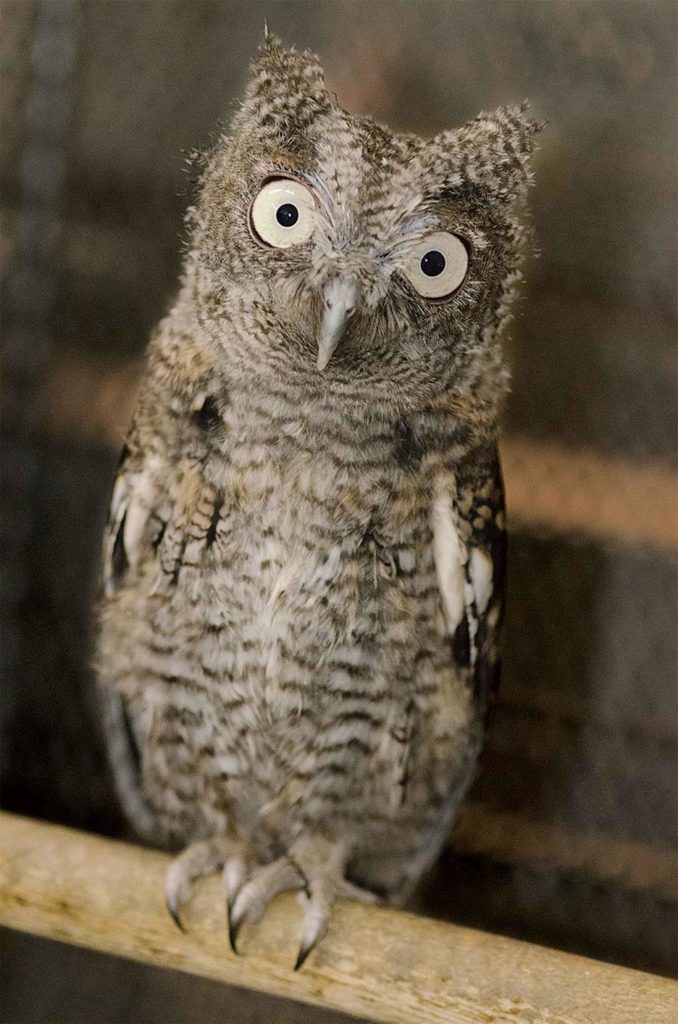 This young screech owl’s nest was destroyed in a development project, bringing it and its siblings to McCoy for care.

“Possums pick up things quickly. They’ll use a litter box. They can be trained just like a kitten. Groundhogs and raccoons will do that, too. Raccoons are very quick to learn things. You have to keep an eye on them. Some people think they want a raccoon for a pet. Believe me, you don’t want one. Having a raccoon for a pet is like having a houseful of 2-year-old humans. They’re curious about everything. They get into everything. They have those thumbs so they can climb and open things.”

She spends a good bit of time each spring and summer day with the baby songbirds. They require frequent feedings by syringe. “Birds have a very short gut system, so if you can get something in there, you have a good chance of saving it,” she says. “I get tons of robins because they’re common in this area. I usually get them because the nest has fallen and they can’t relocate the nest.”

She also has barred, great horned and screech owls at the moment. The young screech owls were brought to her when a property developer cut down the tree where their nest was located. “Habitat destruction is the number one problem,” she says. “Feral cats and house cats would be number two. I love cats, but not when they’re killing wildlife.”

Call for help. If you find a wild animal you think is injured or unable to provide for itself, get in touch with a rehabilitator, she says. It is illegal to possess wildlife without a permit and training.

“Being a wildlife rehabilitator is a labor of love, that’s all it is,” she says. “There’s no pay involved. There’s no charge for my school programs. I do it because I love wildlife. When they’re having problems, I want to get them back into the wild.”