The night skies are filled with wonder—thousands and thousands of stars, planets, constellations, and galaxies that have inspired artists and song writers from Vincent VanGogh to John Lennon. However, this fascination with the night sky is fading under the bright lights of modern civilization. Light pollution from excessive, misdirected and intrusive illumination is competing to dim the buoyant hopes and dreams often credited to ‘starry, starry nights.’

“The reality is that nearly 80% of the residents of North America and 60% of those in Europe can not see the Milky Way,” says Fabico Falchi, leader of a global group of environmental scientists who recently completed a study of light pollution. The New World Atlas of Artificial Night Sky Brightness (cires.colorado.edu/Artificial-light) also found that 83% of the world’s population—and 99% of those in the U.S. and Europe—live under light-polluted skies where the view of objects in the night sky is significantly hindered.

Star gazing. “There are many benefits to being able to look up and see the stars, but a major one is simply grasping the immensity of the universe and realizing the humbling part we play in it,” says Eric Vanderroot, astronomy and physics professor at Florida Atlantic University. “It’s part of being human—there’s a hunger among people for a sense of place. They want to connect to the universe and know that it’s real and not something they only see on the screen at the movie theatre.”

“The magnificence of the star scape against a truly dark sky is something you never forget,” says Scott Feierabend, director of the International Dark-Sky Association (IDA). “The natural night sky is our universal heritage and we educate the public and policy makers about conserving it; promote responsible use of outdoor lighting; and empower the public with the tools and resources that will help them to bring back the night,” adds Feierabend. 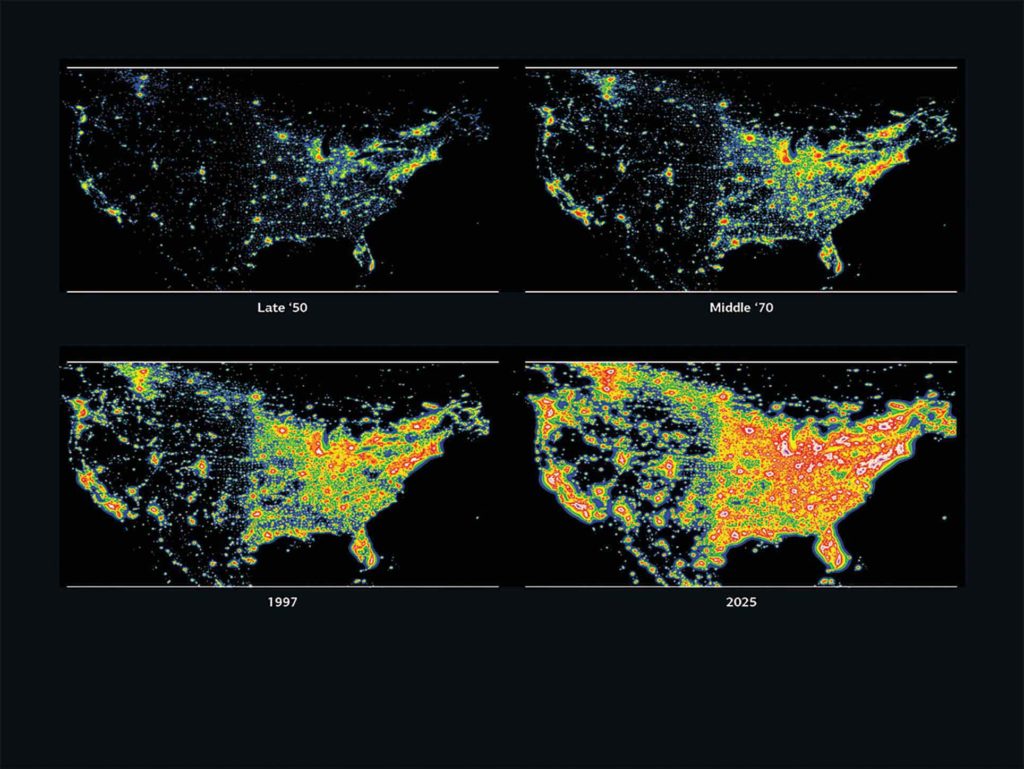 Feierabend says the first step to reducing light pollution is to make people understand what they’re not seeing. “The vast majority of people are amazed that there is something called light pollution, but light used improperly is a pollutant just like industrial toxins in the air and water,” he says.

Comparing skies. Astronomers use a stellar magnitude system to rate the brightness of stars, and The Globe at Night—an international citizen-science campaign (globeatnight.org)—uses the same rating system to compare the darkness of night skies to raise public awareness of light pollution. The scale runs from 0-7, and at a magnitude of 2—typical of an urban sky—only about 50 stars can be counted from dusk until dawn. A typical suburban sky would have a magnitude of
4 with about 500 stars visible. Night skies in rural areas—well away from large cities—might have a magnitude of 6 with roughly 5,000 stars visible. Truly dark skies—far from both large and small light sources—would garner a 7 rating with 15,000 stars visible.

After 50 years of observing the stars, amateur astronomer John Bortle also devised a rating system. His nine-level Bortle Scale (shown on the following page) illustrates the impact of light pollution. In introducing it in 2001, Bortle wrote, “Thirty years ago one could find truly dark skies within an hour’s drive of major population centers. Today you often need to travel 150 miles or more. In my own observing career I have watched the extent to which ever-growing light pollution has sullied the heavens. In years long past I witnessed nearly pristine skies from parts of the highly urbanized northeastern United States, but this is no longer possible.”

“We schedule nine Star Walks a year, obviously when there is no moon,” says park interpreter Carl Hopper. “These are family-oriented entertaining and educational tours of the night sky, and they include an opportunity for participants to view planets, galaxies, nebulas, star clusters, and other celestial sights through telescopes provided and operated by our volunteer sky guides.”

Amateur astronomer Terry Paridon is a regular as a sky guide at the Copper Breaks Park. “We get people from metropolitan areas like Dallas that are hundreds of miles away and they are in awe of the night sky. Many are seeing the Milky Way like they never have before—or for a long time—and you can hear the excitement in their voices when they see it, the rings of Saturn, and globular star clusters.” 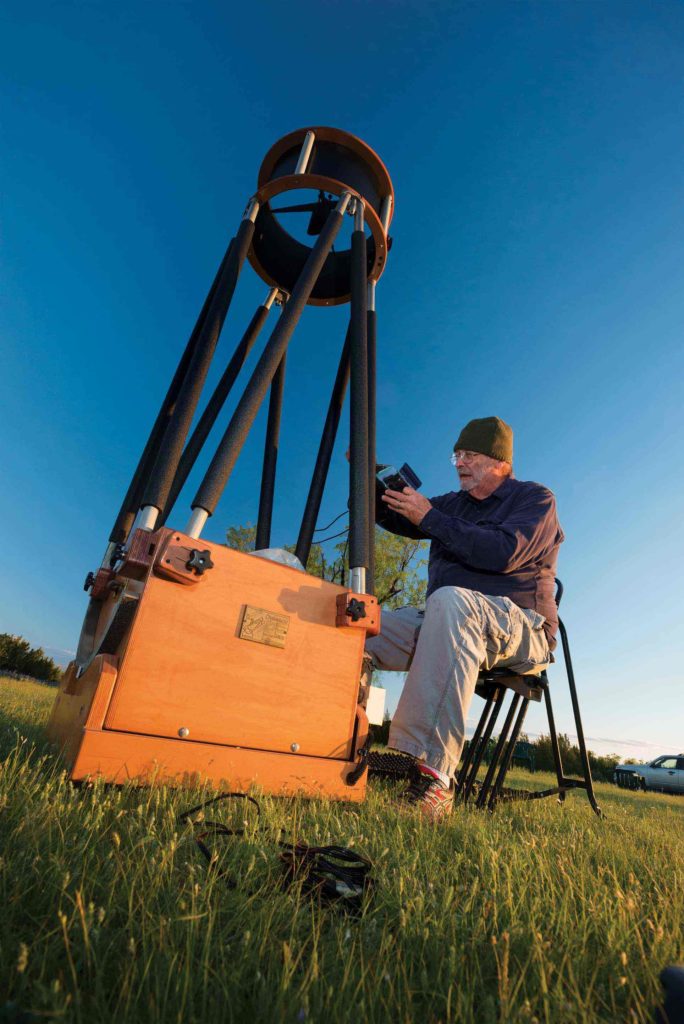 Paridon builds his presentation around the cultural aspects of the stars—from Greek and Roman mythology to the celestial stories of Native Americans. “It’s pretty humbling that the stars were there when the first human looked to the sky, and cultures have been naming them and building stories around them ever since,” he adds.

Reducing light pollution. Traveling to a dark sky park, reserve, or sanctuary (darkest of the dark) is a great option, but most people would prefer to see more stars in their own backyard. Therefore, the best place to begin fighting light pollution is right at home. The IDA offers these suggestions: use light only where needed; use shielded fixtures so light is not emitted into the sky; and use dimmers and motion sensors on all outdoor lights.

“Oftentimes people move to the country to see more stars at night, then they create excessive light pollution with their own installations,” says Feierabend. “Motion sensors mean lights only come on when they’re needed and proper shielding puts light only where it’s needed, not lighting up the sky or trespassing on a neighbor’s property.”

“Despite popular belief, there’s no proof that keeping a bright light on all night deters crime,” adds Vanderroot. “In fact, bright lights shining on your property may actually attract thieves who are far more conspicuous if having to carry flashlight.”

Persuading community officials to adopt proper outdoor lighting ordinances can have a major impact on light pollution. “One of the greatest threats to dark skies is from skyglow, which is the dome of light around municipal areas that can brighten night skies for 100 miles or more,” says Feierabend.

Skyglow results from excessive light that reflects back into the sky or light that’s emitted above the source’s horizontal plane. This is scattered by dust, water vapor, and other particles in the atmosphere to produce a luminous background glow.

Many municipalities are switching to more energy efficient LED lighting which is a mixed blessing. White LED light emits more energy in blue wavelengths that are implicated in environmental and human health concerns. It also adds more to light pollution—according to the World Atlas of Artificial Night Sky Brightness. LED lights of 4000K can result in a 250% increase in light pollution compared to High Pressure Sodium lighting.

“We recommend LED lighting of 3000K or less to reduce the amount of blue light,” says Feierabend, whose association provides a Dark Sky Seal of Approval used by many retailers. “We’re not against lighting­—we just want it used responsibly.”

“We used a three-year journey of over 150,000 miles and shot 3,000,000 images to document the magnificence of dark skies and the threat that light poses to it,” says Mehmedinovic. 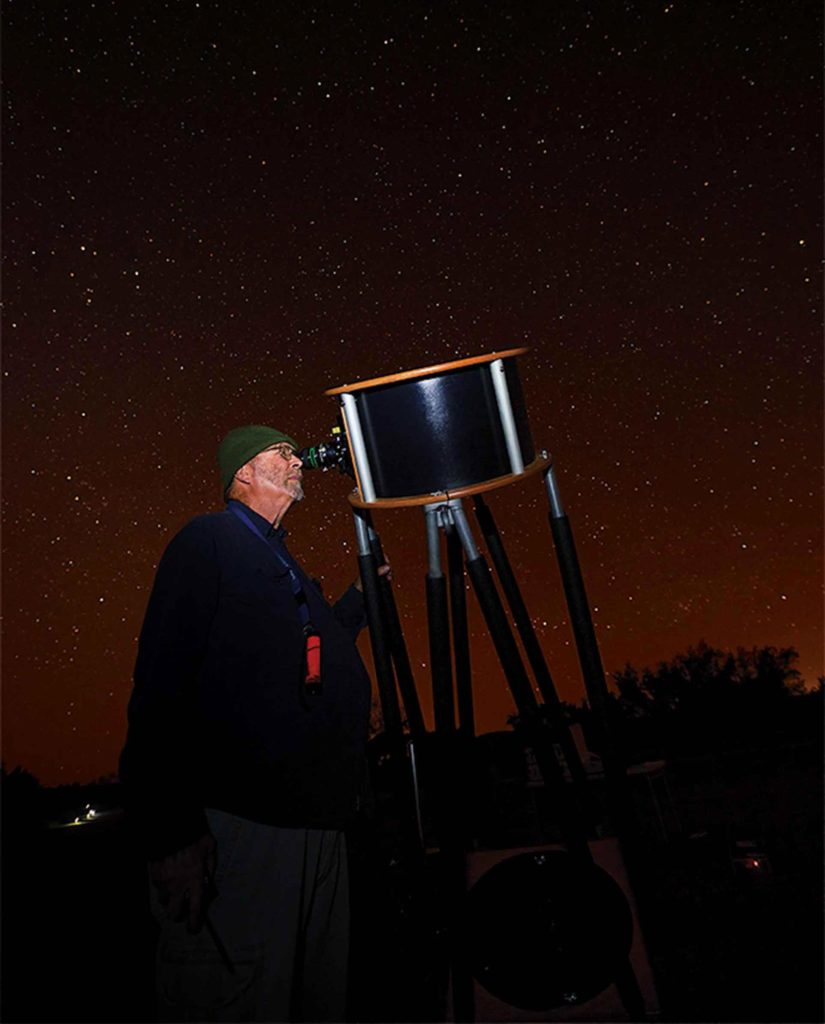 Other concerns. Light pollution is a concern to more than dreamers, lovers and star gazers—its environmental impact has also been well documented. “For billions of years biology evolved in a world where light and dark were controlled by the length of day and life evolved under that schedule. Only the last 100 years has the spread of artificial light changed that cycle,” says Vanderroot.

Examples of light pollution’s impact on animal behavior abound. Sea turtles nest along the shoreline and when the young are born they need to get in the water to avoid predators. Instinct draws them to a low, bright light, which they presume is the reflection of the moon on the ocean, not lights from a beach-side resort. Also, male fireflies glow in the dark to lure females perching in the grass and trees. Light pollution dims this exchange of signals and is thought to be a major factor in the species’ decline.