Many common plants in our yards are poisonous and should be treated with care.

Many common plants in our yards are poisonous and should be treated with care.

Your yard has a dark secret: there are killers hiding in plain sight in your garden and floral displays. You’ve fed them, watered them, and have even shared your table and holiday celebrations with them. But astonishingly large numbers of the plants that surround you can make you very ill, and some can easily kill you.

Nobody is surprised to hear that plants can be deadly. After all, anything called dog-strangling vine (Cynanchum rossicum or C. louiseae) has to be up to no good. And wolfsbane (several species of Aconitum) just sounds evil. But most are shocked when they learn how many plants are very poisonous. Pretty little killers aren’t just found in The Addams Family’s garden. They’re everywhere.

People have kept medicinal gardens, ones filled with plants known for their healing properties, for centuries. However in the past decade there has been growing interest in developing ones that have a different focus—plants that can kill you.

Deadly blossoms. Even flowers as common as daffodils are potentially dangerous. Their leaves, flowers, and especially their bulbs contain a toxic chemical called lycorine. Ingesting any part of them can cause nausea, vomiting, abdominal pain and diarrhea. Compounds in both lily-of-the-valley (Convallaria majalis) and foxglove (Digitalis purpurea) are found in common heart medications. Eating them can induce everything from nausea and diarrhea to deadly heart arrhythmias. 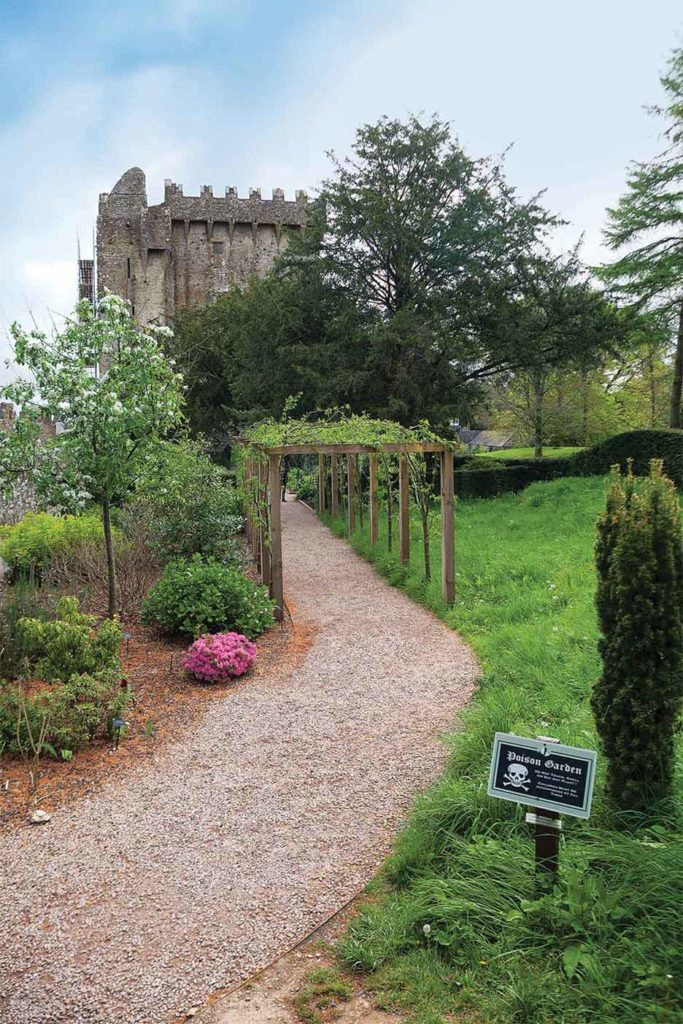 Many plants on display in Poison Gardens have both beneficial and deadly sides.

The list of commonly grown dangerous plants goes on and on. It includes chrysanthemum, hyacinth, oleander, and festive plants like holly and mistletoe. Even some mealtime staples like the tomato and the potato make the list. They’re members of the nightshade family, and all of the plant except the parts we eat are poisonous.

Plants have developed toxins as defense mechanisms to protect themselves against insects and other predators, says Antonio DiTommaso, a weed science professor who oversees Cornell University’s Weed Science Teaching Garden and the Muenscher Poison Garden in Ithaca, New York. Since they can’t get up and leave when something attacks them, they had to come up with something different.

Knowledge of how dangerous some plants can be dates back to the trial and error discoveries our earliest ancestors made. So people feel a deep unease around poisonous plants that they don’t towards other common toxic substances in their environment such as household cleaners.

For example, when Cornell’s College of Veterinary Medicine announced it was temporarily relocating its poisonous plants garden to a new location on campus, DiTommaso’s co-worker, Kathy Howard, a teaching support specialist in the School of Integrative Plant Science, was shocked by how many people expressed concerns about the possible dangers this posed. They weren’t aware that many are common plants they see every day.

“When people learn that they have a poisonous plant in their garden they often ask whether or not they should remove it because their grandchildren are coming around,” says John Robertson, a British gardening speaker who runs the popular poison plants website thepoisongarden.co.uk. “My answer is, well your grandmother had it in her garden and you are still here. Just be sensible and don’t let them run around on their own until you can make them understand that not everything is good for them.”

Even though poisonous plants are all around us, the risk of accidentally ingesting a fatal amount of one is incredibly small. Most have such a bitter taste that anyone who bites into one immediately spits it out. Fewer than five people a year die from accidentally eating poison plants in the U.S. 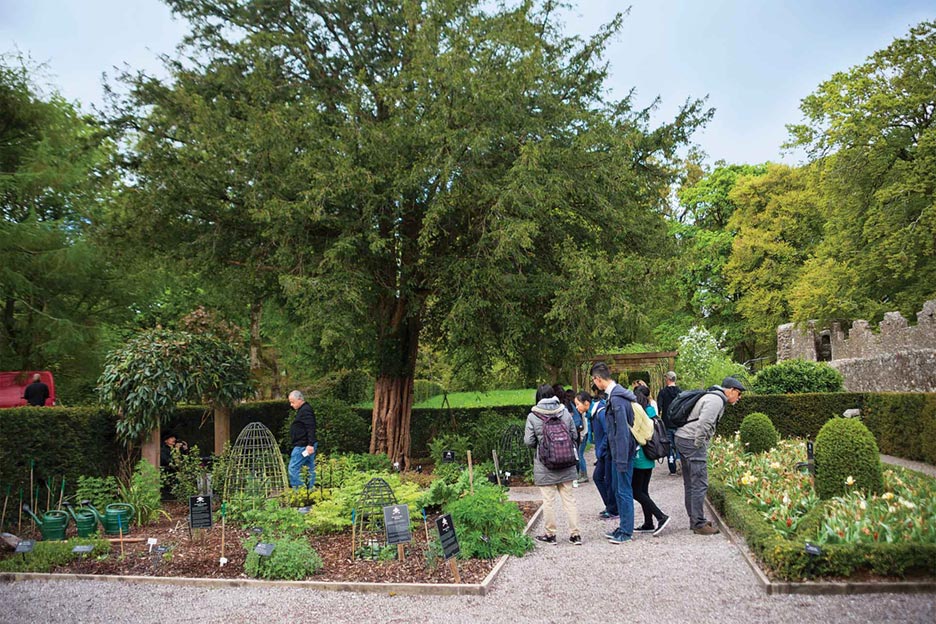 Tourists come to Blarney Castle in Ireland to kiss the Blarneystone and tour the poison garden before they leave.

“When people go on about how poisonous something is, I say, to paraphrase Tom Cruises’s character in Jerry McGuire, ‘show me the bodies,’ ” says Robertson. There are not hundreds of thousands of people dying in the UK just because the corn cockle is a poisonous wild flower.”

While very few people die from accidentally ingesting poisonous plants, many have been sickened or injured by them, DiTommaso says. People should appreciate their beauty and diversity, but they also need to treat them with care.

“I know one couple who picked up an angel trumpet (Brugmansia), and brought it home in their car,” Howard says. “These beautiful plants with their sweet smelling flowers are great ornamentals for the garden, but it gave off enough toxic fumes during their half hour drive home with it in their car to make them really sick.”

Angel trumpet and its close cousin, jimsonweed, are hallucinogenic and were once used in native spiritual rituals, DiTommaso says. These are potent chemicals, and people have lost their lives experimenting with them to get high.

The castor oil plant (Ricinus communis) is another beautiful but deadly plant, Robertson says. Its seed contains ricin, one of the world’s most dangerous natural substances. But it’s a very unstable substance that deteriorates almost immediately. So most of the stories you hear about its potential as a terrorist weapon are complete nonsense.

Scary tales. People are fascinated by the macabre. Poison Gardens have become major tourist attractions in the UK and Ireland. The most famous poison garden, located at Alnwick Castle in north east England, attracts more than a half million visitors a year. Others can be found at the Blarney Castle in Ireland and at Bryngwyn Hall in Wales.

Much of the Alnwick Castle’s Poison Garden’s popularity is because their tours highlight the different ways plants in it were used to harm people over the ages. They allow visitors to scare themselves safely—like a ride on a roller coaster, Robertson says. Most folklore, though, are tales designed to reduce the harm these plants can do.

“Take the Atropa belladonna, deadly nightshade,” Robertson says. “Its slightly sweet black berries could be very tempting to eat if you didn’t know what it was. Just telling a young child not to touch something doesn’t do any good. But saying that it belongs to the devil, and if children picked it the devil will come for them might keep them safe.”

“I came up with the idea of developing a poison garden at Bryngwyn Hall after hosting a rather wild foraging course,” says Auriol Marchioness of Linlithgow. “My head gardener Andrea Atherton was very enthusiastic about the concept but I think my children thought I was completely off the wall.”

Lady Linlithgow was quickly captivated by the plants. Even though the garden is only 30-months old it has become her favorite part of the garden. 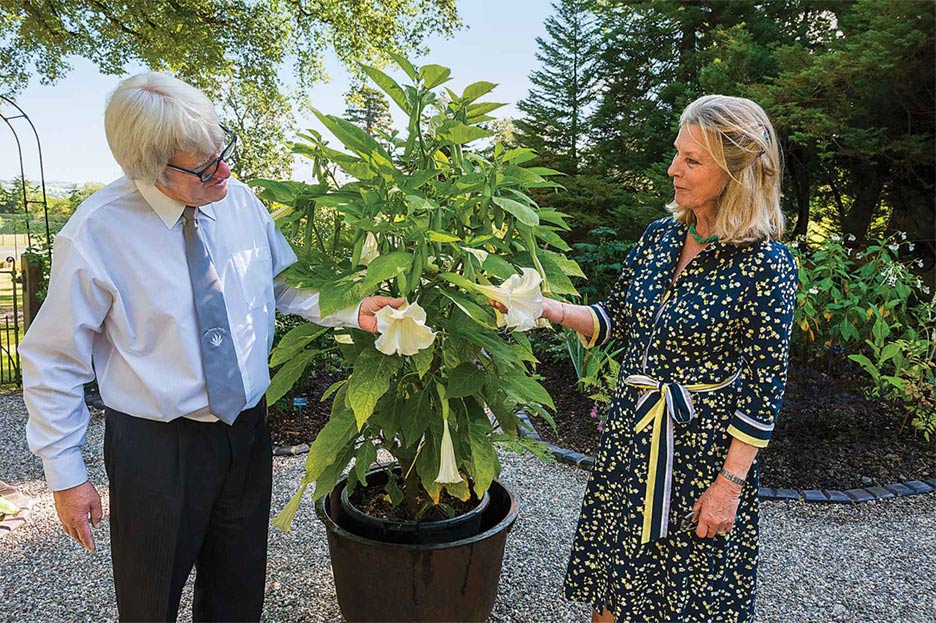 Lady Auriol Linlithgow shows John Robertson one of the beautiful, but potentially deadly angel trumpets (Brugmansia) growing in her garden.

“I’m fascinated by how some entire plants are poisonous but only parts of others are, or how they can be beneficial at one dosage but poisonous at another,” says Lady Linlithgow. “The plants are very beautiful and are growing exceptionally well. It’s a marvelous spot, I’m over the moon with it.”

The poison garden at Bryngwyn Hall was designed to have a mystical, magical feel to it, Lady Linlithgow says. The purpose was to highlight the plant’s healing properties not just their poisonous ones. She uses a natural remedy, prepared by a local herbalist and homeopath from plants harvested in her garden, to control her allergies to goose grass.

“Still Andrea [her gardener] has developed quite a reputation for running the poison garden here,” Lady Linlithgow says. “She was stopped by a man at the supermarket the other day who asked if she was the person in charge of the poison garden. When she confirmed that she was, he asked her if she could tell him how to poison his wife’s lover. She said while she actually could, she wouldn’t.”

Poisonous plants practically never cause fatalities, but there are no end of products derived from plants that do. Just the numbers dying from tobacco related illnesses or drugs derived from the opium poppy alone each year are staggering.

“That’s why when ever people ask me what is the most dangerous thing in the yard, I always say it’s the gardener,” Robertson says. “Plants aren’t wicked. We are the ones who take these poisonous plants and turn them into harmful ones.”