Searching for seaweed on the shores of Ireland.

Searching for seaweed on the shores of Ireland.

There are as many as 10,000 known seaweed varieties growing in oceans worldwide. Six hundred of those live along Ireland’s 3,000-mile-long coast. On the Dingle Peninsula in County Kerry, Darach Murchú keeps track of his local species using notes that are hand written in minuscule print on water-proofed paper. He understands something that many land-dwellers don’t: Among pools left behind by the receding tide exists a magnificent world of edible plants.

“Some resemble trees, others resemble miniature plants, and others look like grasses” Murchú says. “They have all sorts of different forms — spirals, snake-like, sausage-shaped, tuber-shaped. Some are microscopic; others much deeper are massive, growing 150-feet tall.” He knows this world more intimately than most, and he wants the people who aren’t as well acquainted with oceans to know it, too.

Ó Murchú is reaching out by teaching about seaweeds in classes offered through his business, Elements Outdoor Training, and as part of seaweed foraging and cooking classes at the Dingle Cookery School. Spending a few hours on the seashore with students, he explains how to identify, find, and harvest up to 10 different kinds of seaweed. The group then travels a few miles away to Dingle, the peninsula’s main harbor town, where they learn from Murchú and Chef Mark Murphy how to use the seaweed they’ve collected to enhance their food. The course fits well into the Dingle Cookery School curriculum, which showcases fresh-caught seafood and traditional Irish cuisine. 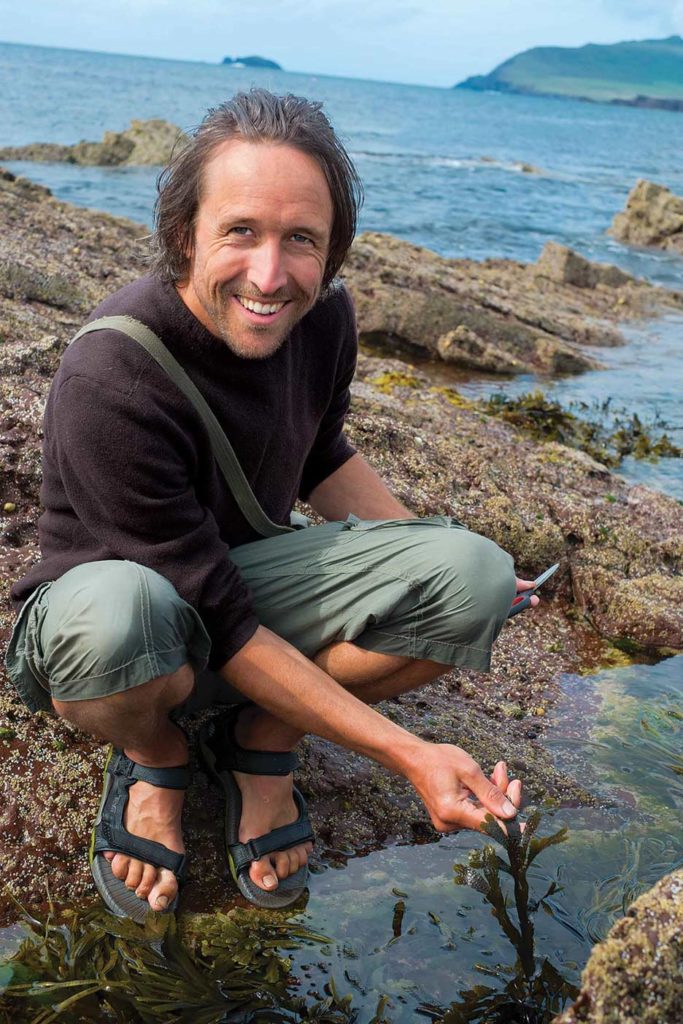 Ó Murchú shows students how to identify and harvest edible plants. The group then travels a few miles to the Dingle Cookery School to learn how to use them in food.

“There’s been a great interest in seaweed in recent times,” Murphy says. “Darach has spent many years learning and using different seaweeds. He is a natural teacher.”

Seaweed can be tough to chew. It can be overwhelmingly salty and smell unpleasantly fishy. And yet, people around the world are getting excited about its culinary possibilities. Some say different varieties can do everything from fight infection and rejuvenate adrenal glands to quell inflammation. It can boost calcium, magnesium, iron, potassium, manganese, and Vitamin B12, according to experts. It can nourish the skin and ease congestion. For cooks, when seaweed is prepared just right,
it’s also good to eat.

“These are the first two seaweeds I came in touch with as a kid,” he says. “The oarweed — I loved because it’s a salty, chewy snack. The carrageen, I didn’t love. My mom used to make ice cream with it. There would be war in our house when she made it. Now I like it, of course.” 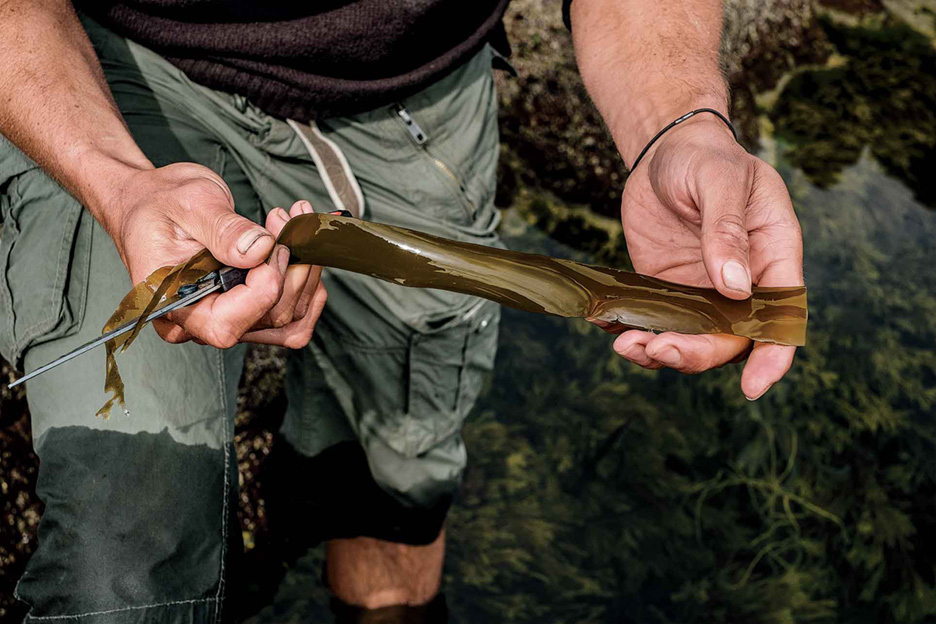 Ó Murchú recalls
loving the salty, chewy chunks of oarweed as a child.

His way of looking at things comes from the unusual life he’s led life so far. He studied engineering at the Dublin Institute of Technology and then worked in Silicon Valley. He studied to be a mountain guide in Scotland, and led expeditions to the Himalaya and other high places. He’s always returned to the Dingle Peninsula where he spent time as a child. Now, in between other stints, he teaches people that the sea plants they’ve thought to be stinky and ugly — are actually worth a taste.

The foraging workshop begins with a simple lesson: There are three classifications of seaweed — brown, red, and green. Even this little spot, the size of a small back yard, is diverse. There are groups of bladder wrack, oarweed, and dillisk – “powerhouses against cancer,” he says. And there are patches of carrageen and tangles of sea spaghetti.

Using scissors, Murchú removes a strand of shiny, strappy oarweed (a type of kelp), leaving roots intact so the plant will grow back. “The Japanese use a closely related seaweed called kombu to make dashi soup stock,” he explains. He runs his fingers along the side, drawing attention to the glossy gel that adheres there. “It has a strong umami flavor, and will deepen the flavor of anything. I’ll wrap a fish in one of the big fronds and bake it in the oven. The kelp gives it a bit of depth and flavor — a richness and a fullness.”

He cuts a branch of chestnut-colored pepper dulse. It’s also called the “truffle of the sea,” he says. Snipping it into bits, he fans the pieces onto his palm. “I grind this to powder and then sprinkle it on top of food — anything I think it goes well with. It’s tiny, but it’s just … powerful.”

He leans over a pool that’s been left behind by the receding tide. It’s full of filmy tendrils, brownish soft button shapes, and translucent leaves that seem spun of a lime-green silk — sea lettuce. The small pool illustrates a big concept. “These seaweeds are quite extreme in that they have to put up with extreme conditions,” he says. “On a sunny day a lot of the water evaporates and leaves the salt behind, and then on a rainy day the rainwater fills the hole and the salt gets diluted or washed out.”

As students peer ever more closely, the discussion meanders, and soon the course is about much more than plants. 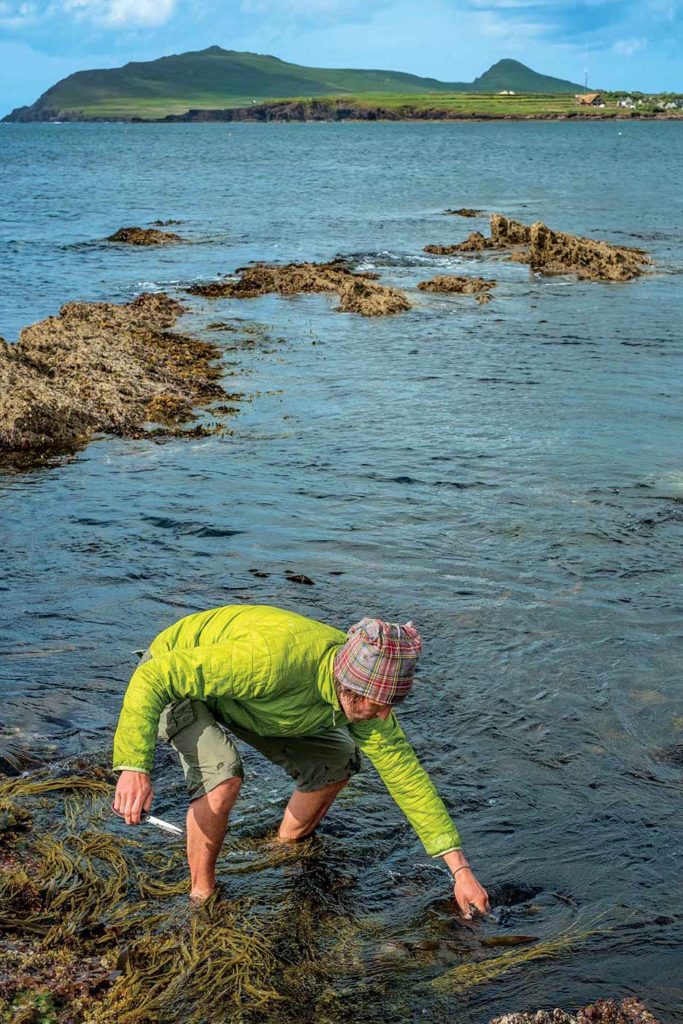 “Darach has spent many years learning and using different seaweeds. He is a natural teacher.”

Generations ago, Irish farmers were building new soil and enriching existing soil by folding in strands of seaweed they hauled from the shore zones. In certain parts of the island’s west coast, the technique is still in use. Murchú worries that the rocketing world demand will cause careless harvesting and will damage marine ecosystems. He hopes to raise awareness in the class.

He gently pushes his thumb at a thimble-sized anemone to show how it forces a mild suction against the skin. He points to cone-shaped limpets that look like volcanoes. “That’s their patch for the rest of its lives,” he explains. Their calcium shells are developed to connect with the rock contours where they were formed. “Once the tide comes in, they’ll be eating small seaweeds on the rock or elsewhere. They have a tiny foot, and they’ll leave this spot and wander around.” The limpets wouldn’t be able to get the same seal against a rock if they were to settle in another location. “Once they sense the tide is going out, they come back to the same place,” he says.

When he’s foraging, Murchú, too, watches the rise of the sea. Absorbed in the work of inspecting this freshly revealed ocean world, he can be surprised to find that so much time has passed, and the tide is returning.