Crops in bloom can create opportunities for farmers and property owners.

Crops in bloom can create opportunities for farmers and property owners.

Farmers are finding that crops in full bloom can attract more than bees and butterflies. Colorful fields of sunflowers, canola, lavender, and clover are among those proving to also be unexpected tourist attractions. For a few weeks a year they can be an opportunity to not only pocket a little income but also polish agriculture’s image.

Last fall, the glow from a 40-acre field of sunflowers near Kansas City drew tens of thousands of visitors to the Tonganoxie, Kansas, farm of Ted and Kris Grinter. The rush on Labor Day weekend was so large traffic caused a safety concern and local officials asked for a temporary shutdown.

“We were overwhelmed by the crowd,” says Ted. “People are just drawn to the beauty of a big field in full bloom, and when word gets around on social media that visitors are welcome for pictures and to pluck a few blooms they jump at the chance. It’s work, but we know we’re putting a lot of smiles on people’s faces.”

While the Grinters have started charging $1 per bloom if people harvest the blooms, they don’t do it for the money. “We’d really prefer people didn’t pick them—they don’t make good cut flowers and the field isn’t as beautiful, but people want a keepsake and as farmers we have to make money whenever possible,” says Kris.

“The real value of the field is the way it makes people feel,” she adds. “Something amazing happens when you walk through a sea of beautiful blooms and it seems whatever problems people brought with them just melt away. This field may belong to us, but the beauty here is bigger than us and we feel obligated to share it.” 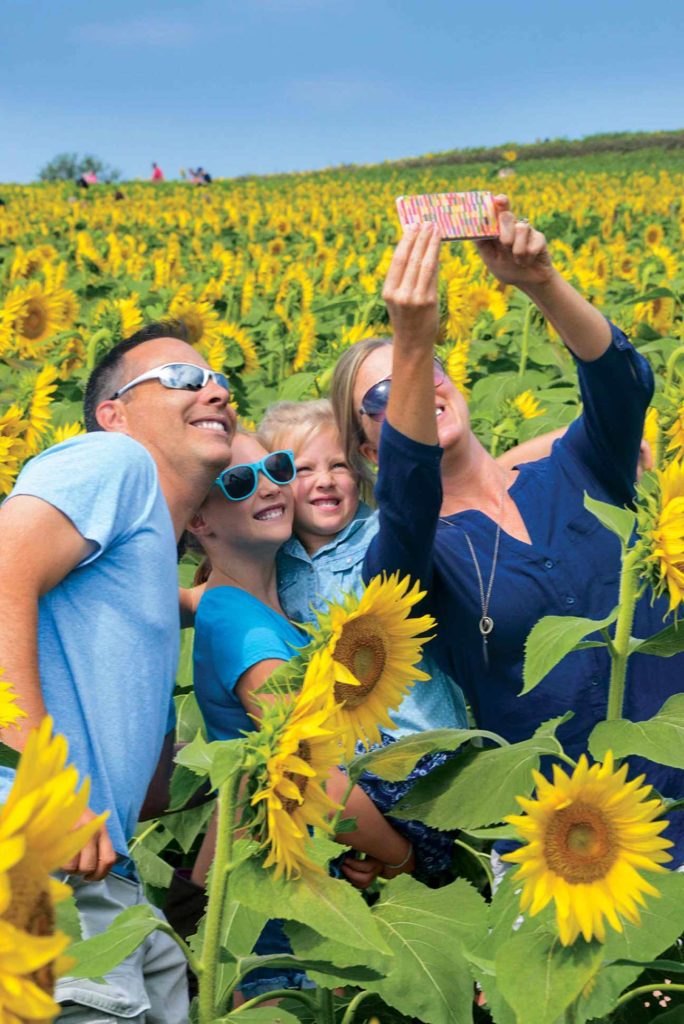 A field in full bloom is a great place to take a sunflower selfie of the family.

The Grinters have been growing sunflowers for 40 years, but the power of social media has turned their primary goal of producing birdseed into an agritourism success story. “We’d always noticed a few flowers missing on the outside rows of the field, but four years ago our daughter suggested we put up a Facebook page for the farm (facebook.com/GrinterFarms) and things exploded,” says Ted.

A little education. Kris uses the Facebook page to update viewers on the progress of the crop and to impart a little insight into the challenges farmers face. “The page saves endless phone calls, and it also allows people to share their experience. Every year farmers tell us we’re crazy to open our field to the public, but then someone shares a story that makes you feel really good—or breaks your heart—and we remember why we do,” says Kris.

Sunflower selfies are the goal of most visitors to the field, though professional photographers also use it as a backdrop (with a requested donation). “We also get an occasional request for a wedding, but we discourage that because we learned pollen will stain a wedding dress,” says Ted.

“Our biggest challenge is parking,” he adds. “We’ve planted grass to accommodate cars and are planting  corn earlier so it’s harvested before the flowers bloom. We’re also getting help from local volunteers to direct traffic.”

Ted uses a seeding rate of 22,000 per acre and gets about 90% emergence. “If you figure people cut an average of one flower apiece—and knock down one more—then we’re giving up three to four acres of the crop. When we harvest it we still get a yield around 1,000 pounds per acre,” he says.

“Now, we’re using cover crop mixtures of several species but we include sunflowers primarily because our landlords really like it when they bloom—it makes their farms the talk of the neighborhood and a great place for visitors to take pictures and for us to tell our story about soil health.”

The lure of a field of lavender launched a business for East Marion, New York, farmer Serge Rosenbaum. “We started with a small patch of lavender that we used to enable production of lavender honey, dried lavender, and lavender sachets. One year, we had more than we needed so while on vacation we put up a sign inviting people to help themselves. The bucket we had left for donations was overflowing, so we decided to expand our family business,” says Rosenbaum.

Lavender by the Bay now has 17 acres of lavender with 80,000 plants in French and English varieties. Visitors to the farm pay a $5 fee to walk the field, take pictures, and harvest a lavender bouquet. Professional photographers pay a $150 fee for a 90-minute session. (lavenderbythebay.com)

This Swiss cow didn't get her close-up...until now!

Plant a few wild ones and see what happens!