Chef and The Farmer

Chef and The Farmer

Vivian Howard’s dancing eyes and quick laugh paired with a downhome, unassuming style endear her to the farmers and home cooks who appear on her Peabody Award-winning PBS show, “A Chef’s Life.” Both she and the show have tapped a nostalgic pride of place that resonates with viewers and draws crowds wherever she goes.

Howard’s approachable style and penchant for elevating a region’s food traditions have made her a celebrity. And with her TV show, a New York Times bestselling cookbook, and an acclaimed restaurant, she has put the spotlight on eastern North Carolina and the Southern food culture that inspire her to add an updated twist to traditional dishes.

“One of the things I think is really cool about eastern North Carolina are the eccentricities of the things that are unique about the way we cook and that’s what I chose to hone in on,” she says.

Howard’s rise to celebrity status started in 2006 when she and her husband, Ben Knight, opened their restaurant “Chef and The Farmer” in Kinston, North Carolina. It was a way to connect diners with local foods and to support farmers in the process. The establishment quickly rose to acclaim and provided a launching point for Howard to learn more about the region’s stories and its larder, as she likes to call it.

The region is part of the coastal plain stretching from just east of Raleigh to the Atlantic Ocean. It boasts wide swaths of flat farmland that teems with crops such as soybeans, corn, tobacco, and cotton along with the go-to foods of the region:  sweet potatoes, collards, and plenty of hog farms for the all-important pork products. 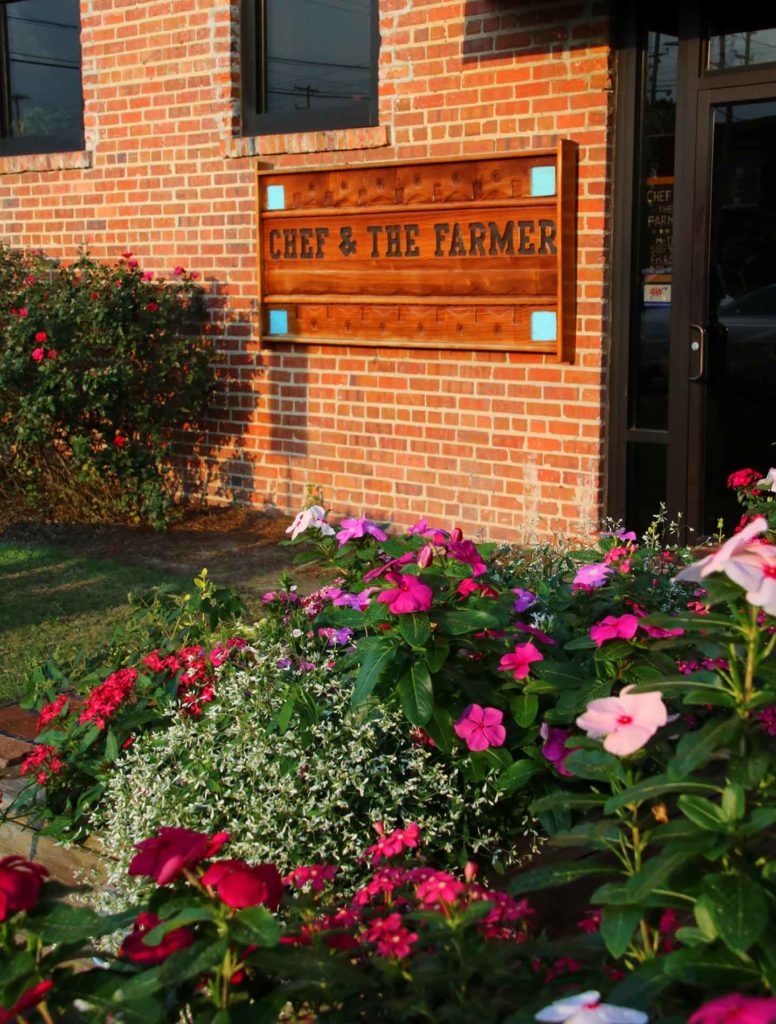 “I had never really paid attention to the food here,” says Vivian Howard, owner of ‘Chef and The Farmer,’ Kinston, North Carolina, “but I realized there were a lot of lessons to be learned from home cooks.”

Tapping into local food traditions. For the show, Howard travels off the beaten path and onto the region’s farm roads to visit farmers and home cooks in her quest to learn more about food traditions. While she exalts pork, cornbread, and sweet potatoes as the holy trinity of the coastal plain, she acknowledges that it took a few years working in New York City restaurants to gain a true appreciation of her roots. That and an earlier study abroad trip to Buenos Aires cemented her interest in food as a subject.

“I had never really paid attention to the food here and I certainly didn’t think it was something worth studying but after I came back I realized there were a lot of lessons to be learned from home cooks,” she says as she sits on a swing under a huge live oak tree at Brothers Farm, about 20 miles from her restaurant. Home cooks, buffets, and covered dish lunches at church “became like research.”

That research turns to inspiration resulting in such dishes as flash fried collards, pork and sweet potato lasagna, and blueberry barbecue chicken, which Howard credits with helping her find her culinary voice.

Warren Brothers supplies flowers and vegetables for her restaurant and has earned, along with farm employee and home-cook mentor Lillie Hardy, a bit of celebrity status by appearing on Howard’s show and in her book. They both contribute to Howard’s research: Brothers by growing 35 to 40 different herbs, vegetables and flowers, and always providing something new for Howard to try at her restaurant, and Hardy by teaching Howard how to make biscuits, fried cornbread, and other favorites. They are just two in a region full of “characters,” as Howard likes to call them, who have helped her gain a love and appreciation for a heritage she is now documenting and sharing through her many projects.

Cutting-edge neighbors. “The moment when I realized that there was something to pay attention to was the collard kraut moment,” she says. “I was reading Sandor Katz’s book, “The Art of Fermentation.” It was 2009 and Howard says it was the hottest text among chefs at that time. “My neighbor dropped off a bag of collard kraut on my doorstep and it was like whoa! They are doing something cool that I’m trying to learn about.” It sent her to the kitchen to create a collard-inspired crostini dish that became popular at her restaurant.

“I feel like the South is so often represented by caricatures in the media,” she says as she laments how farmers, farm workers and rural people in general are often portrayed unfavorably. “I see the people here as multidimensional, people with a skill set that urban populations don’t necessarily have and so we wanted to shine a light on that.”

Howard and her team are providing an economic boost to a region that is gaining attention as a growing foodie destination. She has opened another restaurant called the Boiler Room Oyster Bar and a bakery is in the works. She also is opening a restaurant in Wilmington, 90 miles away on the coast.

“I can’t supply all the vegetables for them,” Brothers says. “I think there are probably six vegetable farms on speed dial that keep them in vegetables. If she can buy it locally she does. I mean milk, meat, produce, you name it, she sources it locally if she can, which is great.” 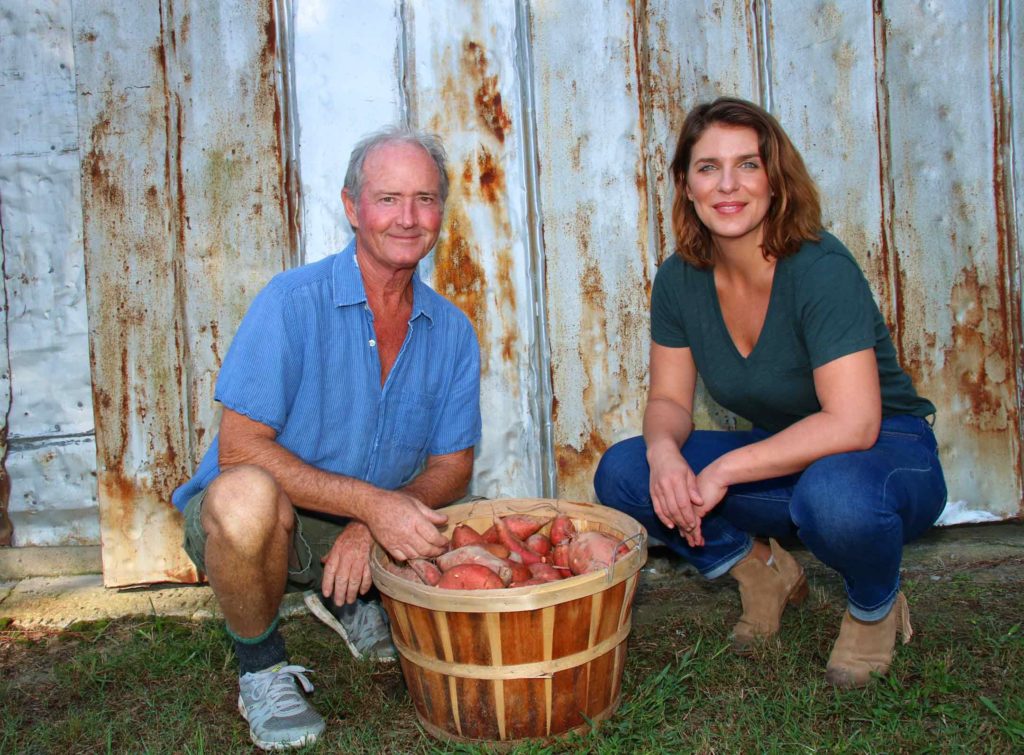 Tobacco, Pepsi, and peanuts. When Howard was growing up, her family grew tobacco. “For better or worse, North Carolina prospered in the tobacco trade for close to 150 years,” Howard writes in her book, “Deep Run Roots.” Eastern North Carolina also grows lots of peanuts. And not too far down the road in New Bern, Pepsi was created in 1893. Tobacco, peanuts and Pepsi inspire one of her recipes, “Peanut, Pepsi, and Bourbon Float,” while giving her a chance to recount a farm experience that many in the region share.

“I barned tobacco,” she says. I put it in racks and I topped and suckered tobacco which I think is one of the worst jobs. That is when you take the flower off the top in early to mid-summer so that the plant will give more energy to the leaves. It’s a sun-soaked hot job and very sticky because tobacco has this tobacco gum on every leaf. At 10 a.m. there would be a mid-morning snack and the farm manager would bring a sleeve of peanuts and a Pepsi. Because your hands were so gummy working in tobacco you would just dump your peanuts in your Pepsi so you didn’t have to use your hand.” On Howard’s book tour, which she made with her food truck, fans were treated to her Pepsi and peanut float.

“People often say that I’ve reminded them of how they grew up and the foods they grew up eating,” explains Howard. “The characters on our show, like Lillie and Warren and my parents, remind them of people in their lives. The show is different for them because it doesn’t seem as if it is staged. They feel as if they have made an honest connection with me.”

Plant a few wild ones and see what happens!

The Occasional Photo: Tending the Flock

Our favorite shots from The Furrow and Homestead magazines.