Living a life of “radical simplicity.”

Milk rings as it sprays into a mason jar. Fancy the goat shuffles in her stand. From her vantage point, she can see houses and apartment buildings. A couple of miles away, slot machines ring, bing, and flash to attract morning gamblers in the legendary casinos of Reno, Nevada. But all is quiet in this side-street neighborhood.

Rebekah May Stetson fills two jars with fresh goat milk, which she’ll make into chevre cheese later. In the meantime, she’s got to bring the kids to school, check in with a farmer she’s consulting with on sustainable rangeland management, drop off cheese for a friend, and arrange to meet friends at the federal building downtown for a lunchtime protest to support renewable energy research.

A few years ago, Stetson was living in rural Nevada, building an organic farm with goats, pigs, chickens, and crops. Now she’s back in the city hustle, but she’s brought some of her livestock—and all of her passion for food and agriculture—with her. 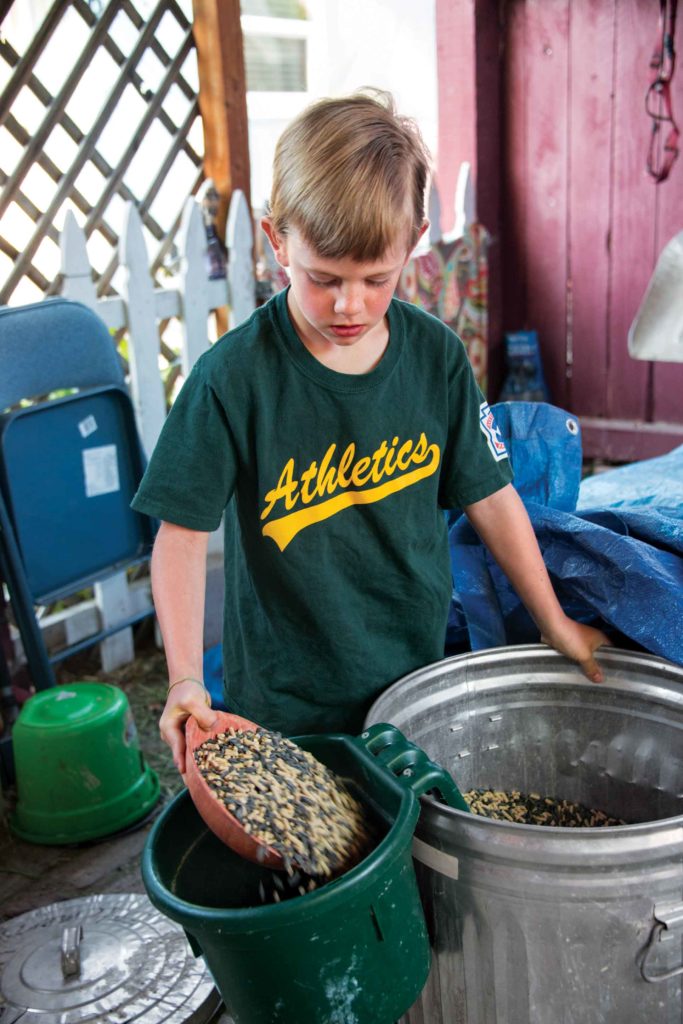 Levi May scoops feed for his family’s goats.

Finding farming. Stetson grew up with turkeys and horses near Reno. So it was little surprise when she moved with her husband to the country and wanted to improve her diet, she started farming.

“My stomach had not been happy for a long time, and being pregnant puts you on your A-game for nutrition,” she recalls. “We started with dairy goats, and it escalated from there. The more I got
a little taste, the more I wanted of it.”

Stetson notes that it wasn’t easy to establish the first organic pork operation in Nevada and try to build a local market for the product. But she adds, “I also found I was gaining a community around it.”

Stetson’s daughter was born with food allergies and intolerances, so her commitment to producing her own vegetables, milk, and meat was strengthened. She also left her job as a banker and became a community health advocate for Lyon County, a job that tapped her skills as a teacher, social worker, and manager of school gardens around the area.

Less than a year after Stetson and her husband bought a house in the country, their home burned to the ground. They rebuilt and farmed for a decade before Stetson returned to Reno with her animals and took a job managing a non-profit farm. 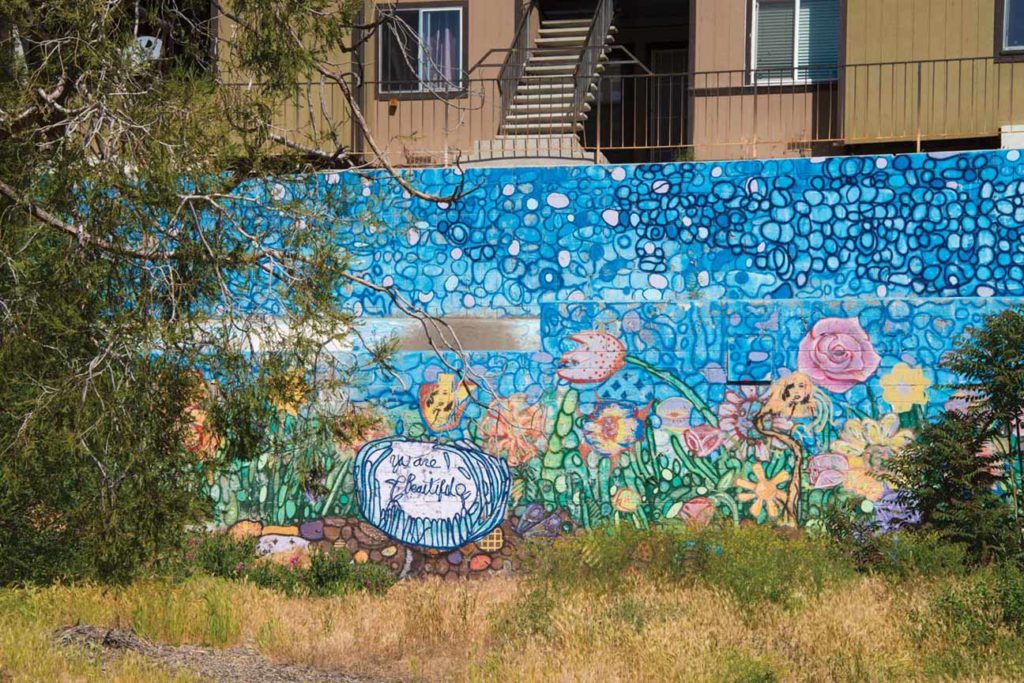 This mural, painted by local kids organized by Chandler and Isacksen’s Be The Change project, overlooks the couple’s farm.

“From my old house, I miss the stars, the sunset behind the mountains, and some of the people,” she says. “But I’m such a socialite. I love being able to engage with more people a lot of the time, and not having to drive 50 miles for the kids to do dance.”

Urban farmer. Though she left wide-open spaces behind, Stetson still keeps her hands in the soil. In Reno’s West of Wells neighborhood, she runs a garden at the Boys & Girls Club where local kids meet twice a week to tend their crops and taste the bounty they’ve raised—straight off the plant.

“They’ve got some serious buy-in when they actually grow that food,” Stetson laughs.

“I would say we probably get 90% tasting rate when they have planted it themselves,” she adds. “If I just bring vegetables into a classroom for kids to try, I’ll get more like a 20% tasting rate.”

Stetson hopes the experience builds self-confidence as well as healthier eating habits—and maybe even inspires them to garden when they’re older.

“My favorite part of educating in the garden is seeing those ‘aha’ moments,” she says. “A lot of kids will say, ‘oh, I don’t like tomatoes,’ because they’ve never had a tomato right off the vine.”

Role models. Just two doors down from Stetson, Katy Chandler and Kyle Isacksen have turned a decaying house and sun-baked yard into a thriving  urban homestead. Chandler, Isacksen, and their two children live what they call “radical simplicity.”

The family modified a plywood horse barn and moved in. Over the course of two years and with the help of about 30 friends, they made the house liveable and added a 165-square-foot cabin in the yard.

“It cost us about $625 to build,” Chandler explains. “The vast majority of that came from money for gas to pick up recycled materials.”

There’s no electricity in the house or cabin, notes Chandler. They read and work by candlelight. Food stays cold in the chilly high desert night air. While dinner is cooking slowly in a reflective solar oven, they can take a relaxing soak in their hot tub—a horse trough over a wood fire.

“One of the joys of not having any money is that there’s all sorts of technologies people around the world use all the time,” Chandler points out cheerfully. “We’re just rediscovering those.” 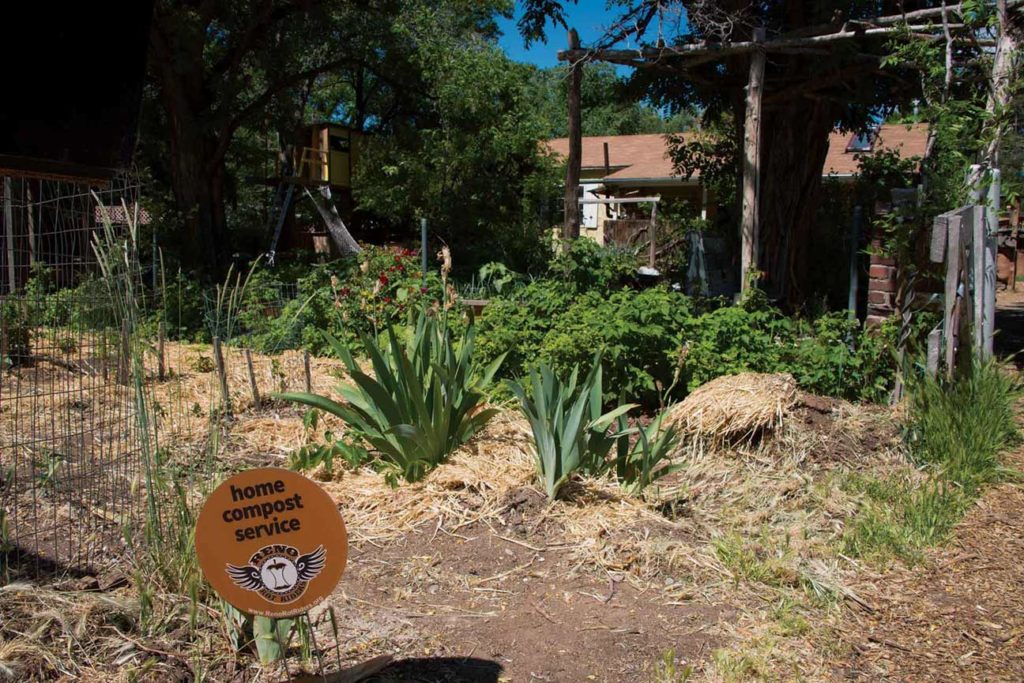 So are their neighbors. Through their Be The Change Project, Chandler and Isacksen bring people together to create neighborhood art and celebrations. Their project also promotes permaculture—a holistic growing system built upon natural relationships and cycles—reaching out to the community through their “Edible ‘Hood” collaborations.

“A donor gave us money to hire three young people to learn gardening in a neighbor’s barren lot,” Chandler says. “She provided water and could take anything she wanted. We grew enough food to give away to more than a dozen neighbors. I met so many people in our neighborhood from that.”

Once each year, neighbors meet in the Chandlers’ backyard to help slaughter and butcher the family’s Meishan pigs, which are offspring of Rebekah May Stetson’s stock.

“It’s very much a community activity,” Chandler says. “It’s one of my favorite things that we do.”

Be The Change also launched the Reno Rot Riders program, picking up food waste weekly from homes and restaurants in Midtown Reno and composting it. There, it is turned into a rich soil amendment that is distributed to farms and gardens.

Front yard. “I garden in the front yard and I end up meeting a lot of people through that,” Chandler says, pointing out the value—and joy—of growing food where most people would put their lawn.

Chandler adds that learning natural building techniques at House Alive in Oregon touched her and Isacksen with a spirit they brought home to Reno.

“It was realizing the building you live in can actually radiate love and connection and a sense of place,” she says. “That was so moving to us.”