Crushed between thumb and forefinger, a perfect cherry—which only recently shed its vibrantly glowing red visage for the deep, black-tinged crimson shade indicative of ripeness—yields a droplet of tart juice onto the surface of a refractometer. Bob Thaden snaps the glass plate over the droplet, points the small tube to the sun and peers through it taking measurement of his crop’s current sugar level. The cherries are ready for harvest.

This year’s crop is especially exciting. The rows of squat, bushy Carmine Jewel cherry shrubs have been slow to produce. “The most we’ve ever gotten was 182 pounds. This year we’ll harvest more than 1,000 pounds,” Thaden reports, a smile emerging above the swath of his substantial white beard as he surely imagines the goodness he and his son, Josh, will coax from the harvest as they ferment and finesse it into a rosé fruit wine. The cherries are just one of a litany of crops the Thadens will harvest from their acreage, complete with vineyard, on the banks of the Tongue River in Miles City, Montana.

Putting down roots. Bob and his wife, Marilyn, both grew up in families who made good use of wild foods. Bob dabbled in winemaking at just 18, and when he and Marilyn married at 20 they noticed a lot of fruit going to waste in the Minnesota countryside where they lived. They decided to take advantage and make wine. “We had no money so we certainly weren’t going to buy wine!” Marilyn laughs.

Bob, Josh, and Marilyn Thaden each tackle their own arm of the business. Josh has taken over wine making, Bob is the resident horticulturist, and Marilyn manages the tasting room.

As they moved around the Midwest to pursue their careers, Bob as a pastor and Marilyn as a speech therapist, they continued to make wine from whatever fruits they could forage: wild strawberries, raspberries, blackberries, apples and chokecherries to name a few. Wild fruits were a bit less plentiful when they moved to southeastern Montana, but they continued on. Eventually they started looking to buy some land with the hopes of—quite literally—putting down roots. When they found an acreage in Miles City with riverfront, water rights, and a kitchen sink that didn’t leak, they grabbed it up.

Grapes? Why not? It wasn’t long before they heard of grape varieties that could survive the chilly landscape of Minnesota. The Thadens looked around at their property sheltered in a cocoon of hills and cottonwood trees and figured if grapes would grow in Minnesota they would grow here, too.

“We started planting grapes, thinking it would be something we could do when we retired,” Bob says. “We were only going to plant 100 vines, enough to make wine for us and our friends, but we never stopped planting.” Their grapes grew well—a bit too well. When they harvested their first real crop they ended up making 200 gallons, right at the legal limit for a pair of amateur wine makers. “That’s three bottles per day for a year,” Marilyn says. “You can see why that’s the limit!”

Drunk with early success, they decided to take on commercial winemaking. They researched, obtained permits, built a fermenting and tasting facility, and opened the doors in 2010. As is standard in farming, the weather felt the need to humble them. The winter of 2009-2010 killed every vine back to ground level. “It was our first year open and we didn’t have grapes,” Bob says.

Working with universities breeding frost tolerant grapes has led to the Thadens populating their vineyard with 8 to 10 sturdy grape varieties. A promising university trial of new varieties on their property looks to produce even more options for the vintners.

They were devastated. “I was going to make grape wine because I finally had a real vineyard,” Bob laments. Instead, they fell back on a freezer full of the area’s hardiest overproducer—rhubarb.

“We had to have something to sell and it turned out great. To this day our rhubarb wine is our best seller. It outsells every other wine three times over,” Bob says. Their dream of fruit wines wasn’t thrown out like the lees dredged from the bottom of a wine barrel, though. They simply had to apply some wit.

For varieties that produced well but weren’t as cold hardy, they decided to bury the vines. They plant at an angle so the stalks grow somewhat horizontally to the ground. At season’s end, canes are bound together, laid down the row and pinned with tent stakes. They then till on either side, burying the vines to protect them from the bitter winters.“We went from getting 25 to 30 pounds of grapes from two rows to 600 pounds of grapes,” Bob says.

Burying isn’t necessary for most of their crop as Bob has tirelessly sought out varieties that prefer their soils and can handle their climate.

“We made a lot of mistakes early on because there wasn’t anyone to tell us what to plant,” he says. This brought out Bob’s inner botanist. He has since worked with research programs of several universities, including North Dakota State University, to access developing grape varieties and other fruits. 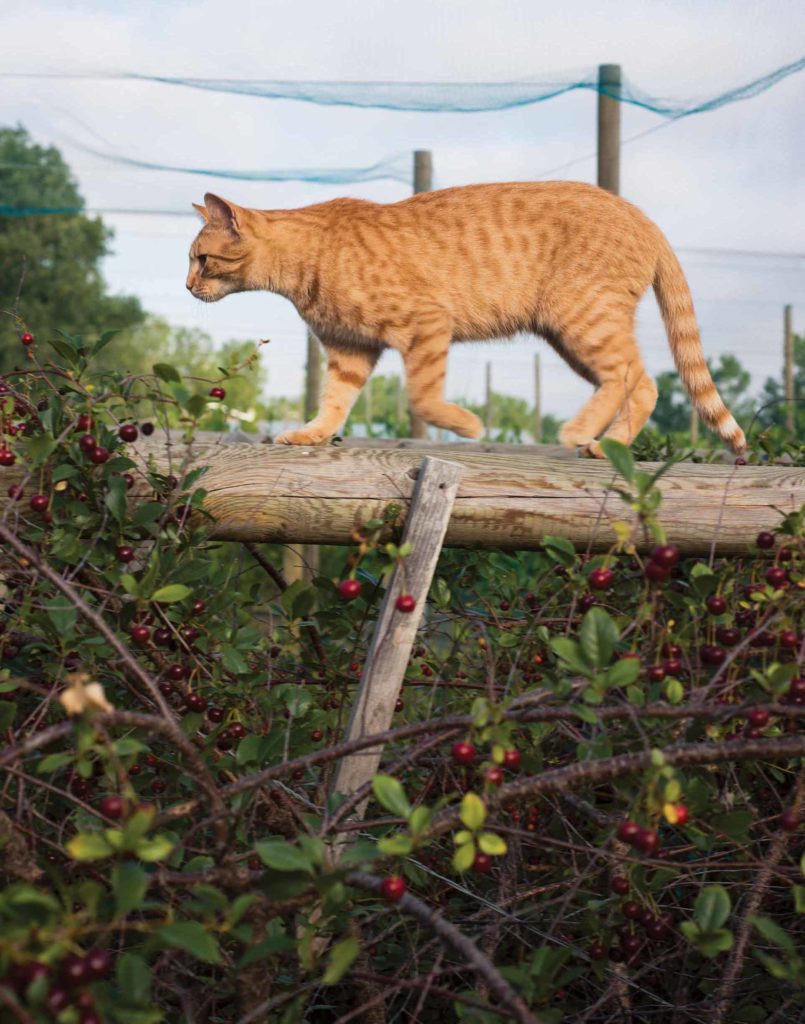 A small troop of cats patrol the vineyard, as much mascots as pest control.

Passion for growth. Though 2017 marked his 50th year of nearly continual winemaking, he has found fresh passion in managing the vines and fruit trees. “I love to grow things so it’s a perfect match for me,” he says. “I also love to meet the public. This vineyard satisfies my soul in many ways.”

Bob and Marilyn brought their son, Josh, on board. After working side by side for six years, Bob turned the winemaking over to him. “He had a very good handle on the process of making wine, the protocols we use, how to do the chemical testing and manipulate the wine. Also, he was respectful enough of my experience and wise enough to know when he needed to check in,” Bob says. Passing along these skills is critical for the long-term success of the winery. “Anyone can buy fruit and keep going, but not everyone can make wine.” Bob proudly reports in the last two years Josh has put out fantastic, even award-winning wines.

The next new thing. This frees Bob to continue searching out more grapes and more fruits. Besides vines, the property has little troves of practically every fruit appropriate for their zone: cherries, apples, plums, black and red currants, yellow raspberries, and an edible blue honeysuckle known as Haskap, whose taste hints of blueberries, raspberries, and strawberries. They also buy and pick area rhubarb and chokecherries.

While Bob tinkers outdoors, Josh happily does  the same inside. In the basement of the tasting room surrounded by massive stainless steel fermenting vats, Josh watches as some CO2 works its way through the twisted glass of a bubbler atop the stopper of one of an assortment of glass jugs. Each 1-gallon to 3-gallon container is labeled with a title like “Apple Pie” hinting at potential new offerings to the winery’s already long list of libations.

Josh delights in sharing his hard-earned knowledge with some samplers touring the winery. He explains how the jugs will go from positively roiling with activity to only releasing a small CO2 bubble every few minutes as they reach the end of the fermenting process. He quickly moves on to describing how he clarifies the wines in the large vats with fining agents and a heaping portion of patience. 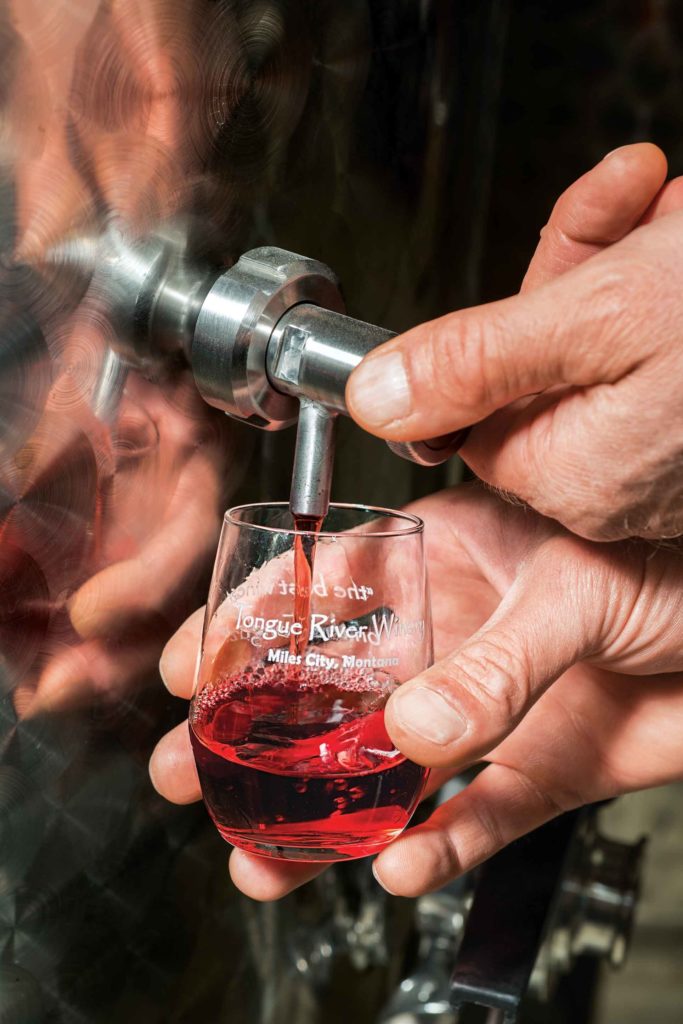 A sample of Cherry Pie wine is pulled from the tasting valve of a stainless steel fermenting tank.

“It’s really important to taste your wine frequently,” he says. While this sounds like a great job perk, it really does help to head off disasters and catch the precise day when the wine is perfectly done. Sometimes Bob and Josh aren’t in agreement on the timing. “I always want to give it lots of time to clarify and I don’t like to use filters or fining agents because it’s never as good,” Josh says. “The wine is done when we need wine on the shelves!” Bob kids.

Impressive wins. Jokes aside, the once amateur vintners have earned their stripes producing fruit and grape wines and topping many competitions with industry heavy hitters. “Tongue Tied,” a red named for the river on which the Marquette and Frontenac grapes grow, is a favorite and recent silver medal winner at an international competition.

The hard-earned wins and a 2017 grape harvest 25 percent larger than their previous record have the Thadens feeling considerably up from their rocky start. As he polishes off a glass of wine representing years of hard work, Bob notes, “There’s an enormous sense of satisfaction when the wine is ready and you know people are going to love it.”