Please don’t be full. “Please don’t be full” must be a popular tune; practically everyone sitting at the back of any long ferry lineup is singing it. No one likes to have a day disrupted by a missed sailing, but waiting for the ferry is just part and parcel of living on an island; there’s always a chance your schedule could be thrown off.

Most Canadians and Americans take for granted the ability to get into their vehicle and head out for shopping or dining whenever they want. But that’s not always possible when you live in a place that’s only accessible by a ferry. Like it or not, life on an island is controlled by the rhythm of the ferry.

Being so isolated is intolerable to many people, but it’s one of the major reasons committed islanders choose to live where they do, says Jeanette Taylor, an author and historian on Quadra Island, British Columbia (BC). For her, being isolated from the mainstream and living in a community that has distinct physical boundaries is the attraction.

Love-hate. Still, nearly everyone who lives on an island develops a love-hate relationship with the ferries that serve them. They like having a ferry as a drawbridge to control access to the island…but they also love to complain when it disrupts their plans.

“We love to hate the ferries,” laughs Patricia Peterson, a nurse practitioner who lives on Quadra. “At various times and stages there has been talk about building a bridge, and all the islanders are just appalled. We might complain about the ferries, but we certainly don’t want a bridge.” 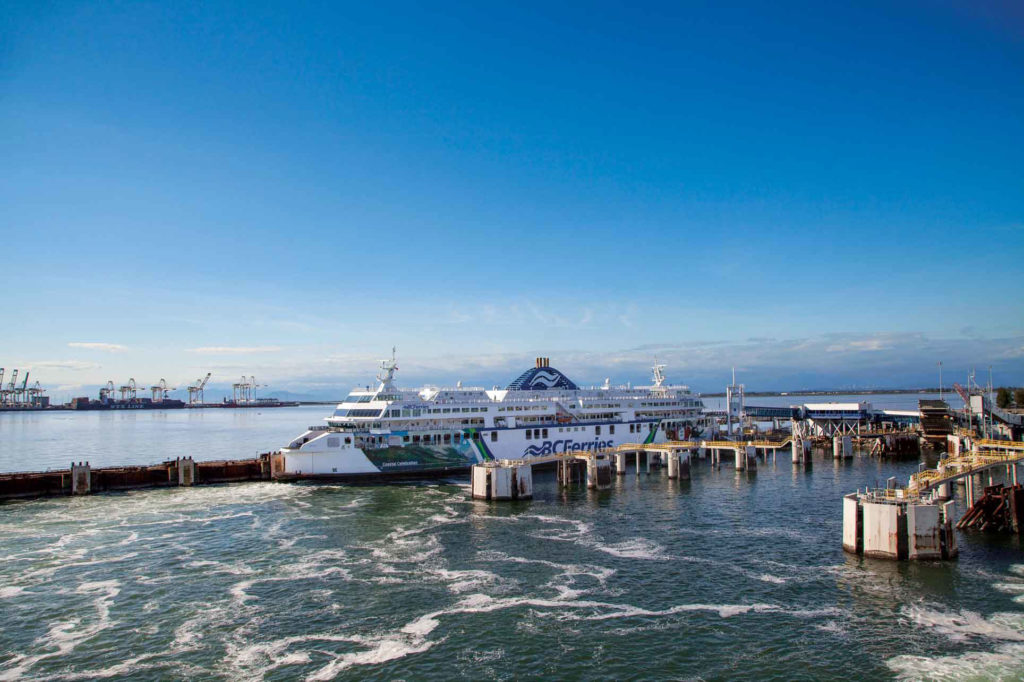 The rhythm of life on the islands off British Columbia’s west coast is set by the ferries that serve them. They supply the island stores with the food, fuel and incidentals needed for modern life. They also bring in the tourists that the economy of the smaller island depend on.

Located between the Campbell River and the BC mainland, Quadra, along with nearby Cortes, are the two stars in BC’s Discovery Islands chain. There are few spots anywhere that match them for sheer, breathtaking natural beauty. Their tourism-based economy depends almost entirely on the ferries that serve them. Tourists pour off the ferries to visit the popular destinations in the summer months. The rest of the year they are sleepy places with a small, year-round population with limited employment opportunities.

“Islanders are famous for waiting until ten minutes before the ferry leaves before driving up to the ferry,” says Peterson. “That’s not a problem for most of the year, but you have to be careful in the summertime when the tourists come. We are always astounded every year the first time we drive down and find that it’s full. So everybody brings a book, a smartphone, or something else to keep them occupied because you might get delayed.”

“It is just part of living on an island,” says Phil Parkes, an educator who regularly commutes to his work on Vancouver Island from Quadra. “Either you accept it or you move off.”

Archeological remains shows that Quadra and Cortes were first settled by First Nations communities thousands of years ago. Loggers arrived in the mid-1800s, soon to be joined by fishermen and farmers who came to provide a local food source for the lumber camps. But it wasn’t until the ferry
service to the islands was launched in the early 1970s that their population really surged.

Hippie enclave. “It was more of the hippy, back-to-the-land movement when I moved here in the late seventies, and that was part of the allure,” Taylor says. “People came here from across Canada and all over the globe looking for a place where they could reinvent themselves. Much of it was play, but it was very seductive and a lot of fun.”

“Islanders today are a real eclectic mix,” says Dion York, a salmon fishing guide who has lived in Quathiaski Cove (Q-cove) on Quadra since 1991. “You still have some of the hippies from the sixties here, but you’ve also got physicians, lawyers, people in forestry and commercial fishing and retirees. There are a couple of fishing guides in the mix.” 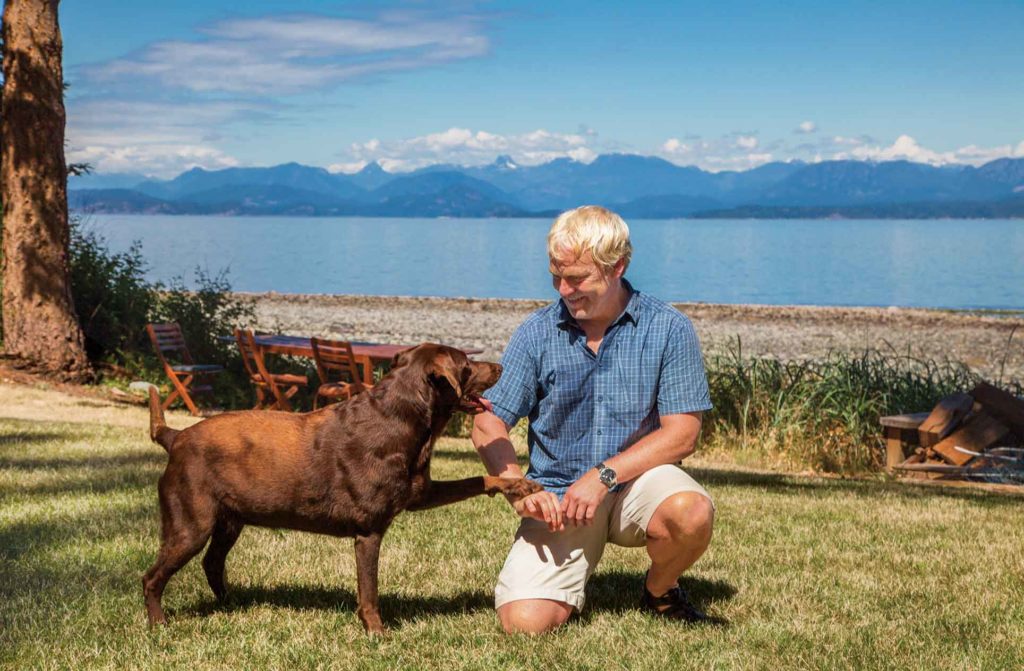 “[The ferry] is just part of living on an island,” says Phil Parkes, an educator who regularly commutes to his work on Vancouver Island from Quadra. “Either you accept it or you move off.”

Each island has its own subtle personality that attracts different types of people. Patricia and Steve Peterson lived on Saltspring (in the Southern Gulf Islands near Victoria, BC) and Cortes Islands
before settling on Quadra. They’ve settled in and hope to live there for the rest of their lives.

“We call it our Goldilocks Island,” Patricia Peterson says. “We lived on Saltspring for eleven years but we found that it was getting too busy, so we moved to Cortes. It’s one island further out from Quadra but it was just too remote for us. We still like to travel, so between tourists in the summer and storms in the winter the two ferry trip was too much of a hassle. Quadra was just right.”

Quadra is a great commuter island. Ferry sailings across the Discovery Passage between Q-Cove and Campbell River are scheduled hourly between 6:00 AM and 10:00 PM. Most days it’s an easy 12-minute crossing, despite the strong currents.

“It’s a time when you can socialize with other commuters,” says Parkes. “My favorite moments are those times the Captain comes on the and says, ‘There are orcas (killer whales) off the bow.’”

Travel from Cortes is much more complicated. First, travellers have to take the ferry from Cortes to Heriot Bay on Quadra; then, it’s a 10-minute drive across the island to Q-Cove to catch the ferry into Campbell River. It’s an hour-and-a-half trip under the best-case scenario. 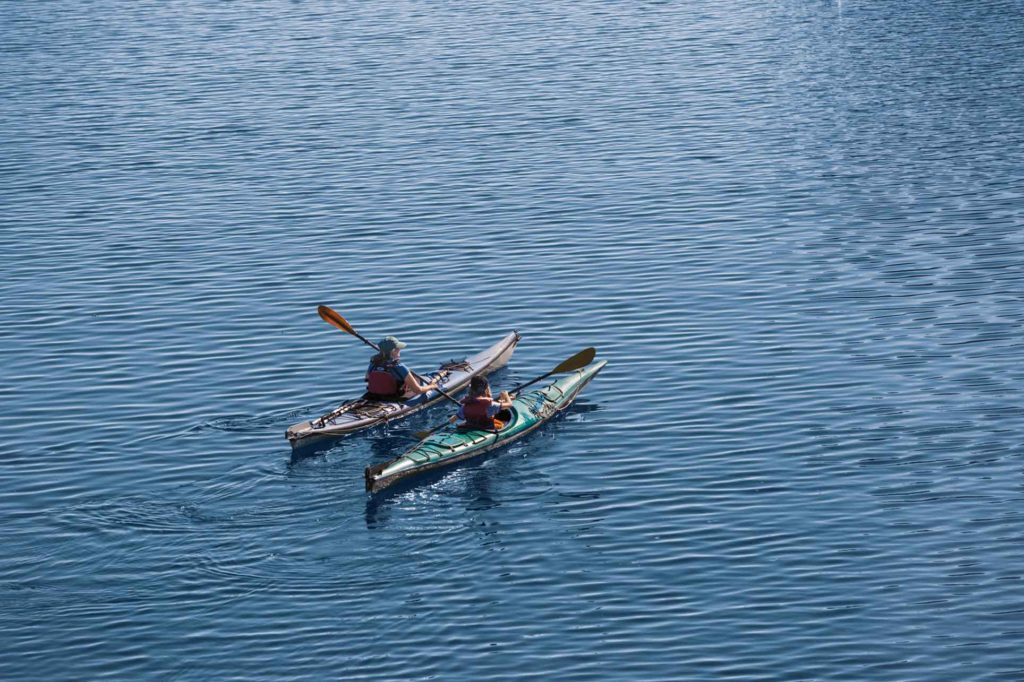 The Marina at Heriot Bay on Quadra Island is jammed with boaters cruising the waters around the Discovery Islands.

Ferries only depart Cortes once every two hours between 7:50 AM and 5:50 PM and the last ferry back sails from Quadra at 6:45 PM. Day trips have to be highly organized. To further complicate matters, the Cortes ferry crosses open water so sailings are often cancelled due to high winds and big seas.

Dodging the lineups. Islanders have devised different ways to reduce the odds they’ll miss a ferry crossing. Phil Parkes keeps a vehicle at both ferry terminals. That way, he can take the ferry as a walk on passenger and not worry about vehicle lineups. The school board does the same thing. One school bus drops the students heading into Campbell River for high school at the Q-Cove ferry terminal and another picks them up on the other side. Cortes Islanders who want on the first ferry will often line up vehicles for it the night before.

“People will take the ferry into town every week when they first move to the islands,” Steve Peterson says. “The longer you stay here, the less you go because you realize you don’t have to.”

The Petersons, like most islanders, try to limit major shopping trips to one of the large centres on Vancouver Island to once every few weeks. They’re rarely pleasure trips. Heading to Campbell River
is even more stressful for those living on Cortes.

“We call it Scramble River because we always have so much to do when we get there,” says Cortes retiree Catharine Bushe. Bushe and her husband Peter Henbury try to take the first ferry on either Mondays or Thursdays when they are guaranteed a spot on the ferry from Q-Cove to Campbell River. They try time their trips with a medical appointments as much as possible so their fare is covered by BC Health’s Travel Assistance Program. Even so, their ferry costs still averaged about $120
(Canadian) per month for 2016 and 2017.

“Whoever has an appointment with the dentist or the doctor will do that while the other starts shopping,” Bushe says. Due to the island’s isolation, the couple likes to buy in bulk so they never run out of necessities. They start compiling a shopping list for their next trip almost as soon as they get back home.

“The cost of living in one of the most beautiful places on earth is you have to work a little harder.”

Everything is more complicated when you have to depend on a ferry for a lifeline, but it’s still worth it for Phil and Anya Parkes. For them, living on an island is a dream come true. They fell in love with their waterfront property the moment they saw it.

“We live right at the water’s edge and have an ever changing view of the coastal mountain range on the mainland across the water,” Phil Parkes says. “The ocean is always spectacular. Just last Sunday, three humpback whales were breaching right in front of the house. We have clam and oyster beds in the intertidal zone and I can fish for salmon out of my kayak. Sometimes I feel I should pinch myself to make sure it’s real. I don’t think the odd wait for a ferry is that big of a deal to have all this.”

Look at the view. “If ever I question whether it’s worth all the extra effort it takes to live out here I just need to turn around, look at the view and go for a paddle,” says Albert Keller with Coast Mountain Kayaking on Quadra. “The cost of living in one of the most beautiful places on earth is you have to work a little harder. If you didn’t have to then probably everyone else would want to live here too because it’s really beautiful and special.”