They’re thinking syrup, all the time.

John Guenther made his first sorghum syrup in 1965, the old way, with horses and a little mill fed by hand, with a group of other Old Order Mennonite families at Muddy Pond, Tennessee. His family still makes it on the farm today, using modern techniques they developed.

Now their Muddy Pond Sorghum has wide-ranging markets. It can be bought online, in stores, and chefs at fine restaurants use it in their meals. Any way you look at it, for the Guenthers, it’s a sweet business.

“Things have changed a lot,” John says. He grew up in an Amish community in Saskatchewan. When he left for Pennsylvania at age 20, he spoke only a German dialect. He’d gotten a fairly good handle on English by the time he moved with the group to the Cumberland Plateau a few years later. 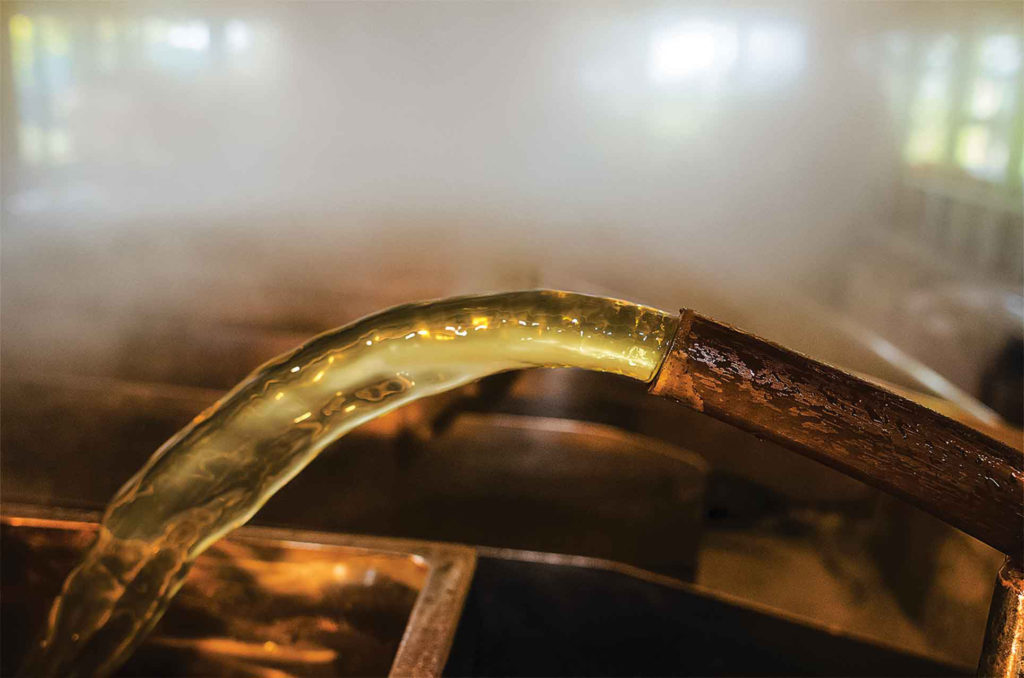 Sorghum syrup flows through the mill.

One of the first things they did was grow and make syrup together. John also made money running a sawmill and custom slaughtering hogs. “All our lives we did whatever it took to make a living,” he says. “After we moved here, we grew to love the Southern people here and in this whole area. Winters weren’t bad. We had our hard times, but we did all right. We still live that way. Every boy in the family can kill a hog and make sausage. We still do it.

“Last winter we killed eight hogs in two days. We have beef cattle, and we make sorghum syrup. We converted the syrup production to steam in 1987 and 1988. We had to learn everything about it. People were afraid of that boiler, thinking it would blow up. But it greatly improved how fast we could cook syrup,” he says.

Growing with change. John, now 75, remembers clearing this land with crosscut saws, burning the wood and then selling it as charcoal to a plant in Cookeville, Tennessee. 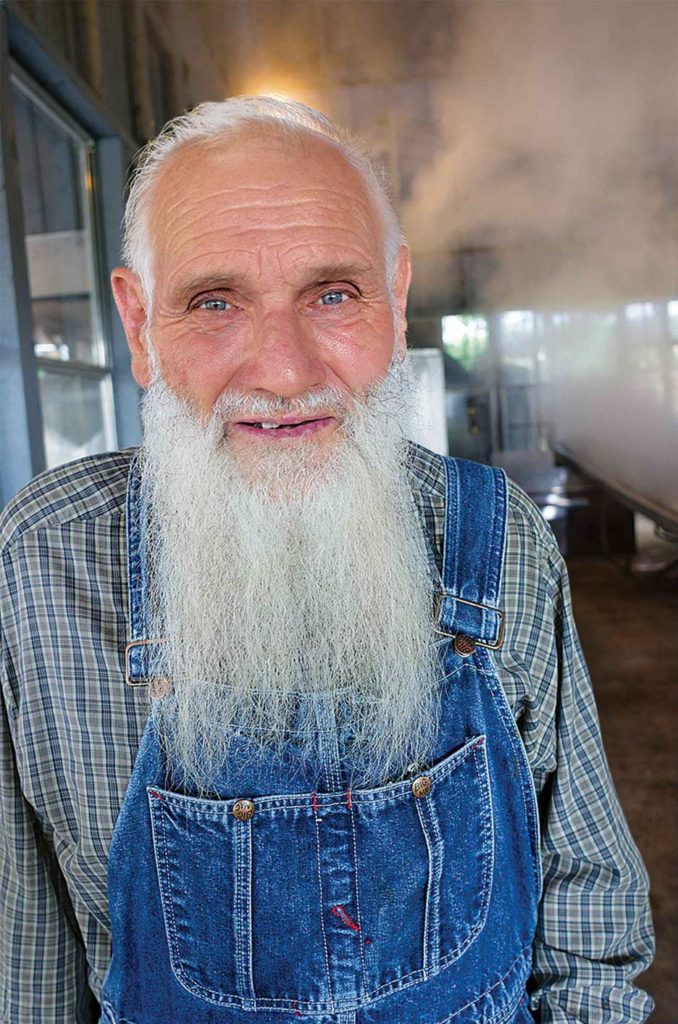 “We converted the syrup production to steam in 1987 and 1988. We had to learn everything about it,” says John Guenther.

“We slowly increased sorghum and cattle. There have been a lot of changes made. Most of the Old Order moved away. We work with tractors. We don’t drive buggies now. Driving horses on the road is too dangerous,” John says.

He’s never shaved, although when he was hospitalized after being injured in a car wreck a few years ago, his beard got trimmed. He’s still unhappy about that. He remembers four German dialects he learned as a child, and speaks them with Mennonite and Amish visitors to the mill.

The mill stays busy in fall, when sorghum gets mechanically ground and processed through the machinery and mill they designed.

“We develop what we use. You can’t go to dealership and buy sorghum machinery. We design it. If it breaks down, we figure how to fix it,” says Mark Guenther, one of John’s sons.

Mark and his wife, Sherry, stay busy demonstrating the old method of sorghum syrup-making at festivals through the year. They’re at Dollywood in Pigeon Forge, Tennessee every October. On November weekends, they’re at Cades Cove in the Great Smoky Mountains National Park. In addition, they’re at several fairs.

“It’s a wonderful opportunity to connect with people to show what we do for a living. We’ve been at Dollywood 16 years now,” Mark says. 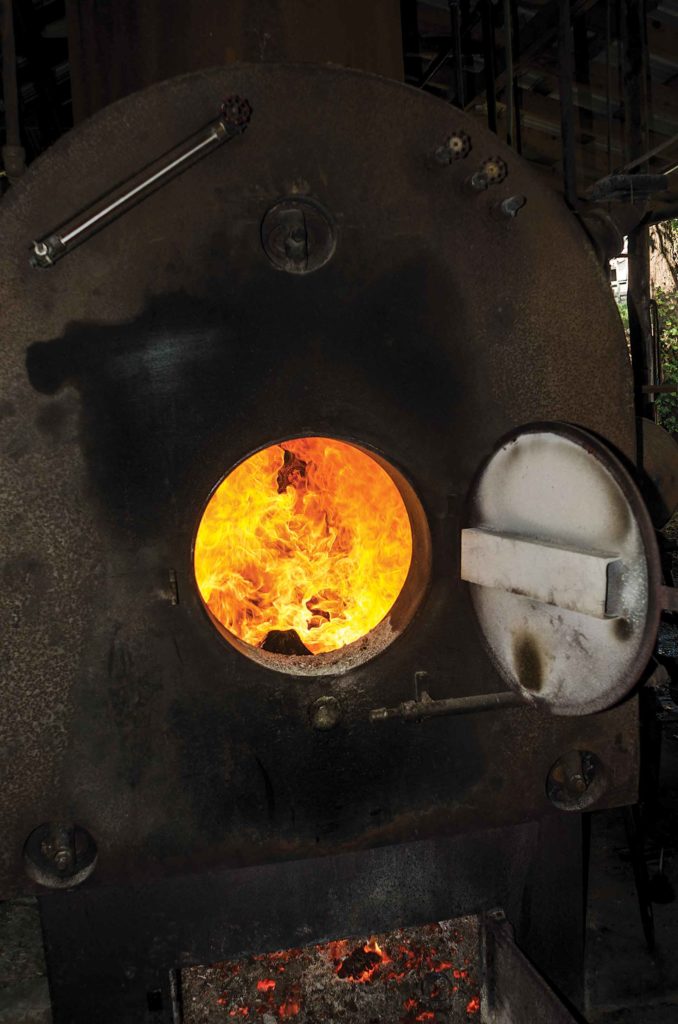 A boiler heats the syrup flowing through the on-farm mill.

“It’s a unique business and takes all of us to do it,” Pete says. “We have to stagger planting every 10 days so we can handle harvest without getting jammed. We planted 53 ares this year. That’s quite a bit when every drop of syrup runs through this mill.”

Eddie says the business keeps changing, and that can be good. “Everybody thinks sorghum syrup is a Southern thing. And it was. Think about sorghum syrup and you think biscuits and cornbread,” he says.

“It’s being used in restaurants from Chicago to Boston and Atlanta to Dallas. It’s being sold on Amazon. Dad really started something with this.”