Down a leafy city street a stone’s throw from Lake Michigan and a couple of miles from downtown Kenosha, Wisconsin, Curzio Caravati is leading a guest on a walk through history.

He stops abruptly and strokes the dark green leaves of a potato vine in a flower pot on his deck.

“Cups is an 18th-century variety from England,” he says reverently in an accent that hints at his childhood in the Italian-speaking region of southern Switzerland called Ticino. “This is a plant that was grown 260 years ago. You have the flower, the seed, the genetics from 260 years ago.”

He talks about Peach Blow, released in the U.S. in 1860. There are Early Rose—an ancestor of many of today’s commercial varieties, Caravati notes—and Beauty of Hebron, both bred by a New York preacher. There’s a Shamrock, a close cousin of the Lumper, felled by late blight during the Irish Potato Famine. And there’s Llumchuy, a Peruvian spud whose name translates to “the potato that will make your daughter-in-law cry.” (Caravati explains that Andean brides had to impress their mothers-in-law by cleanly peeling potatoes, but the deep eyes of Llumchuy make it impossible.) 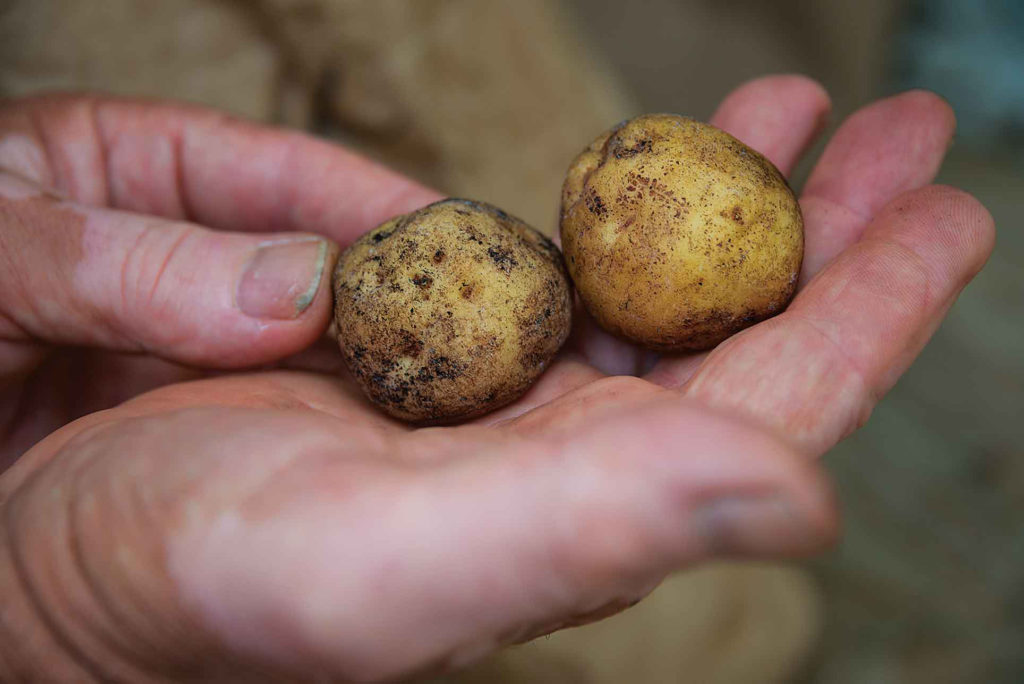 Caravati plants whole, small potatoes. He says they’re like a battery: “when you cut the tuber, you kind of lose power.”

Caravati’s backyard and space he rents from his neighbor form a three-acre refuge that brings these and more than 400 other varieties together across time and space through his Kenosha Potato Project.

“I am very much torn between modernity and antiquity,” Caravati says, describing his collection. “You have the Azul Toro, a modern strain bred by Tom Wagner, then you have Cups, which is ancient.”

Find focus. “I’m trying to save potatoes that have historic value,” Caravati points out. “Many of them are white because before 1950, if it wasn’t white, nobody would buy it. Nowadays, it’s the opposite—people want yellow flesh or red flesh or blue flesh because of the antioxidants.”

And though he loves potatoes with a story, Caravati emphasizes that building a collection of varieties isn’t just creating an overcrowded Noah’s Ark.

“In my very humble opinion, you can’t call yourself a collector unless you develop the skill of selecting,” he says. “Your goal is to improve your collection, not just to have everything.”

That means making sure your collection doesn’t include diseased material. It also requires focus.

“You first have to decide what your goals are,” Caravati says. “What are your parameters?”

In addition to his reverence for old varieties, Caravati focuses on selecting for potatoes with darker flesh—which presumably contain more cancer-fighting, health-promoting antioxidants—and for varieties that grow well in bags, a practice he’s trying to promote among homesteaders and gardeners. 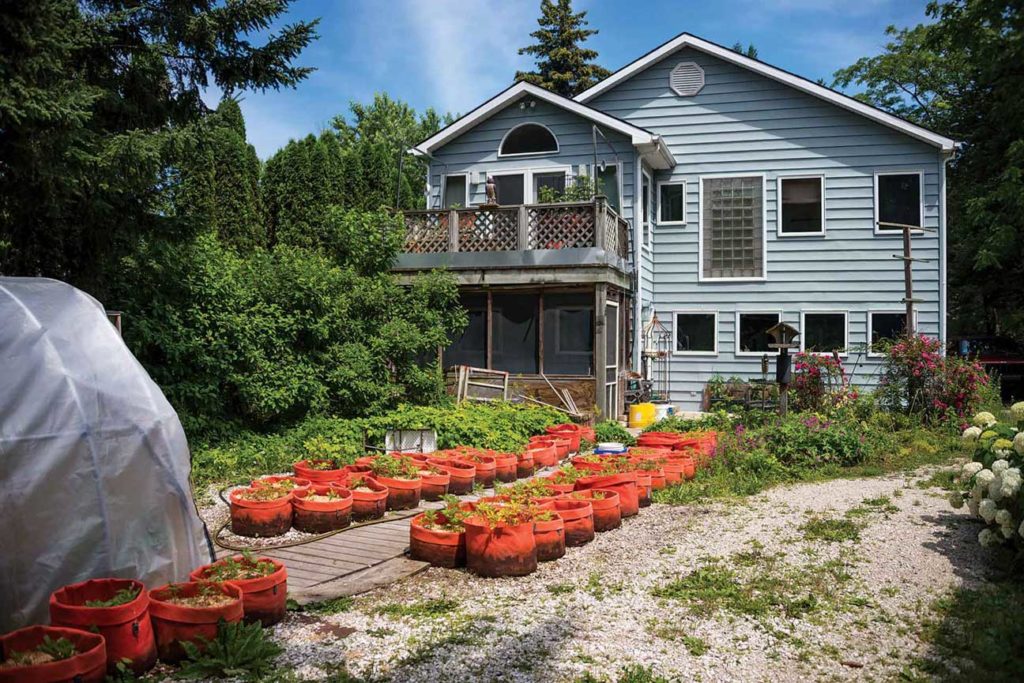 Big bags. “When I started growing potatoes in a traditional way, I thought I would need a tremendous amount of room to grow 400 varieties,” Curzio recalls, realizing how potato vines tend to sprawl.

Then he discovered large canvas grow bags on gardeners.com, a Vermont garden supply company. Caravati tried 100 of the bags and was soon testing new designs and giving the manufacturer advice on how to perfect them for growing potatoes.

Since then, Caravati has purchased nearly 400 more bags—this time, built to his specifications. The bags he favors have a 15-gallon capacity (“anything bigger is too big, and when filled with compost it is too heavy to lift,” he notes) and are red or tan to avoid overheating roots in the summer sun. G

Even with the more reflective color, grow bags keep the soil about 5 degrees warmer than the ground, Caravati notes. That modest temperature boost helps get vines off to a good start in the spring.

Caravati fills his bags with a combination of compost and growing medium, and tops them off with a few inches of wood shavings. The wood mulch suppresses weeds, minimizes evaporation of moisture from the soil, and protects tubers growing in the top few inches of soil from sunburn. Sunburned potatoes turn green and produce high levels of solanine, an alkaloid that can cause stomach upset.

Farmers prefer to grow varieties whose tubers grow deep beneath the soil surface, encouraging larger potatoes and minimizing the chances of sunburn. Caravati looks for vines that set spuds closer to the surface, allowing the plant to produce more tubers in the confined space of the bag. 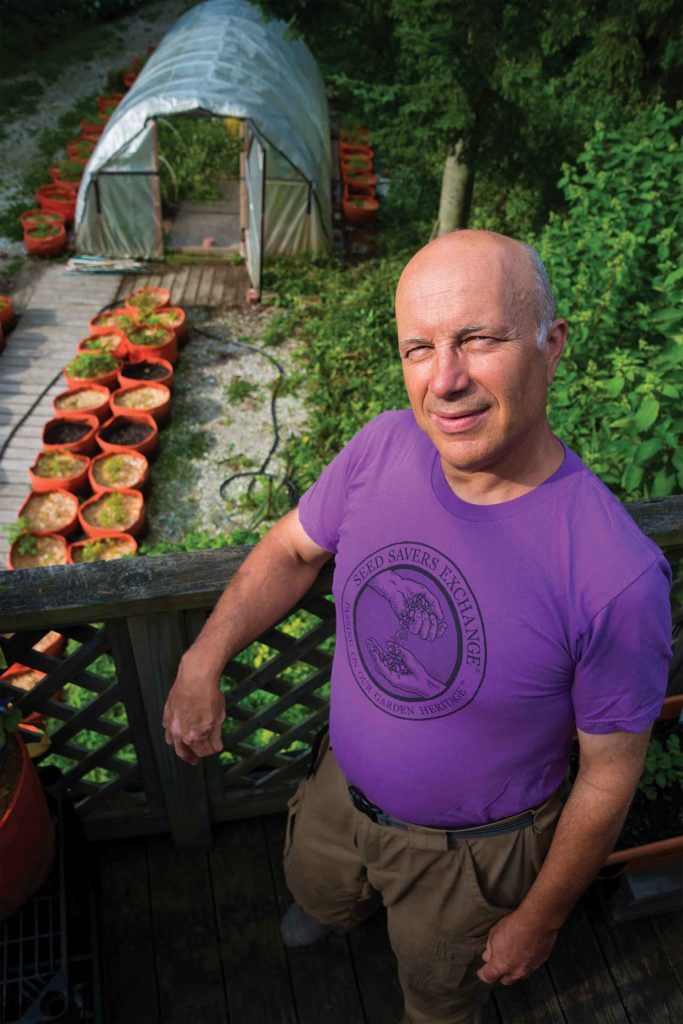 Inspired by Michael Pollan’s The Botany of Desire, Curzio Caravati began collecting and breeding potatoes in his Wisconsin backyard. His Kenosha Potato Project now has supporters in more than 90 countries.

Seed size. Potatoes are tubers, swollen portions of underground stems that serve as storage organs for carbohydrates to fuel the next crop. The eyes on a potato are buds, just like you’d see on a tree branch or rose bush. Once they break dormancy, the buds sprout and start to produce a new vine, something many of us have seen when we’ve left spuds too long on the kitchen counter.

Each of those new vines is a genetic duplicate of the plant that produced it. That’s why potato growers plant chunks of potatoes to start a new crop: they are sure to get the variety they are looking for, and they start the crop off with a burst of energy.

Commercial growers typically cut seed potatoes—the disease-free tubers they are going to plant—into pieces that contain at least one eye and about 1.5 ounces of carbohydrates. Then they treat the cut areas with a fungicide to ward off soil organisms that would rot the piece before it germinated. The pieces are dried, then planted.

Caravati prefers to grow small tubers and plant them whole, eliminating the cutting and fungicide steps. His ideal seed tuber is between 1 and 2 ounces in weight and has a healthy, protective skin.

He eats the tubers that are smaller than a chestnut—the ones he calls “micro”—and eats the ones that are larger than 2 ounces or donates them to a local food bank. That leaves the minis for planting on his urban farm or sharing with other potato enthusiasts via Seed Savers Exchange.

So unlike commercial potato growers or potato-loving gardeners, Caravati wants to produce small tubers to build up his planting stock. To accomplish that, he does something commercial growers work hard to avoid—he crowds his potato vines.

After years of experimentation with as many as 5 vines per bag, Caravati has settled on 3 plants as his high-density planting protocol, which he tests on 20 varieties per year. Hundreds of other bags contain 2 to 4 seed pieces. Rainfall, retained by high-quality compost, carries the vines to harvest.

Harvest time. Beginning in late summer with his early varieties, Caravati harvests his potatoes by scraping away the wood chips and feeling in the soil to see where the highest tubers grew.  Then he turns over each bag to dump its contents. He roots through the soil to collect every tuber, assessing each one for size and taking detailed notes on what grew in the bag that season. Caravati locates the seed piece—the most shriveled tuber of the lot, with the vine growing out of it—and discards it. Otherwise, the rotting seed piece would destroy this year’s crop as it sits in storage in his walk-in cooler.

Caravati weighs each bag of potatoes, adding to his notes. Comparing data from year to year, he can identify high producing varieties. 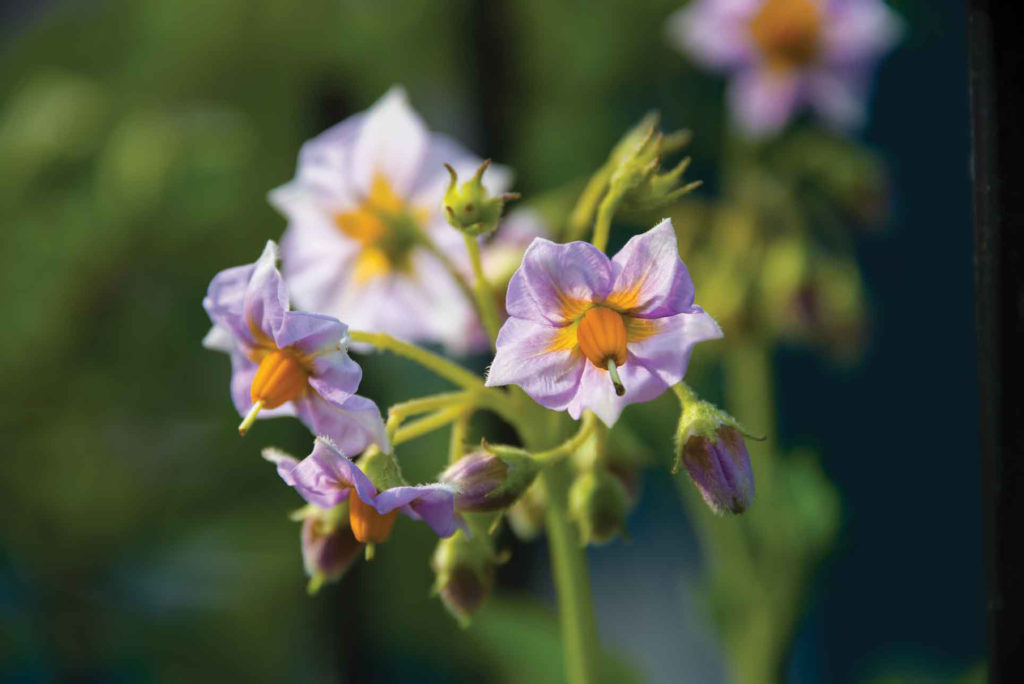 Beautiful potato blooms resemble those of their close cousins, petunias.

True seed. Caravati also produces an unusual potato product—true seed, or botanical seed. Under the right conditions, potatoes produce fruit that look like their very close cousins, tomatoes. Each fruit contains 10 to 250 tiny seeds, each one open-pollinated and representing a unique new potato.

Caravati notes that a single fruit from a Blue Victor vine yielded seeds that produced white, red, and blue potatoes. Other potatoes might be swirls of white and color, large or small, knobby or smooth.

To encourage true seed production, Caravati sprouts a tuber and places its root in a pot of soil on the deck of his house, perching the tuber on a wire mesh support. That forces the vine to produce flowers, which are pollinated largely by bumblebees.

True seed has no commercial value—farmers can’t gamble on never-before-seen spuds—but they are a virus-free package for long-term storage of the mother plant’s genetics. They’re also a treasure trove for breeders, who comb through seed-grown tubers in search of the next Yukon Gold or Early Rose.

Caravati’s hope is that the Kenosha Potato Project will inspire a new generation of breeders.

To help spread the word, he distributes true seed to supporters of the Kenosha Potato Project and Seed Savers Exchange. True seed from mother plants that sparingly produce fruit, like Inka Gold, is sent in quantities of 5 seeds per order; seeds from more prolific producers are sent in batches of 25.

Caravati also distributes seed tubers in exchange for donations of $20 or more. That helps make shipping and handling worthwhile, and supports his potato project as well as his garlic, onion, tomato, apple, pear, and chestnut collections.

Growing foundation. With his experiment plots, breeding efforts, and beehives humming along, Caravati is beginning to focus on creating a legacy. He has established the Kenosha Urban Farming Institute (KUFI) with an eye toward an ongoing educational mission, and is working on a GoFundMe site with his friend Jennifer Conrad. And he is negotiating with two neighbors to buy their properties and enlarge KUFI’s backyard farm.

In addition to his kenoshapotato.com site, Facebook has turned out to be a perfect outlet for Caravati’s natural enthusiasm and eagerness to share his discoveries. His Kenosha Potato Project page has more than 2,700 members; he’s also created Facebook groups for Kenosha Garlic Collectors, chestnuts, and bees. A 2012 YouTube video tour of his farm has garnered more than 42,000 views.

Running through all of Caravati’s communications is his deep sense of wonder and possibility.

“Let’s see what happens,” he says as he examines a walnut-sized potato fruit. “Maybe we will find the most delicious potatoes anybody has ever seen.”

"We thought there would be some interest, but it turned into a much bigger thing than we thought...”.