"We thought there would be some interest, but it turned into a much bigger thing than we thought...”.

“We thought there would be some interest, but it turned into a much bigger thing than we thought…”.

Stop by Burnside Farms at Haymarket, Virginia during springtime and prepare to be awed. Leslie Dawley and her son, Michael, plant more than a million tulip bulbs on their property. When they burst into bloom as the days warm, the palette of colors is nothing short of spectacular.

The tulips are part of a four-season agri-tainment effort on their farm. In summer, it’s pick-your-own sunflowers. In fall, she hosts a fall market featuring pumpkins, gourds, produce, mums and other fall plants along with apple cider and harvest-time decorations. After Thanksgiving, she sells Virginia-grown Frazier fir Christmas trees along with wreathes, garlands and holiday items.

Several years ago, the Dawleys realized the booming area where they lived about 40 miles outside Washington, D.C., was ideal for attracting suburbanites wanting a peaceful, rural experience for a day. During last year’s spring festival, which she called “Holland in Haymarket,” thousands of people show up, paying a $6 entry fee during the week and $8 on weekends. They pay $1 for each tulip they cut, wrap in paper and take home.

“It’s amazing how many people are now living in this area. It’s become kind of a transient area, with people moving in and out. We also have people who are regular visitors and enjoy photography who plan trips to coincide with the tulips blooming,” she says. 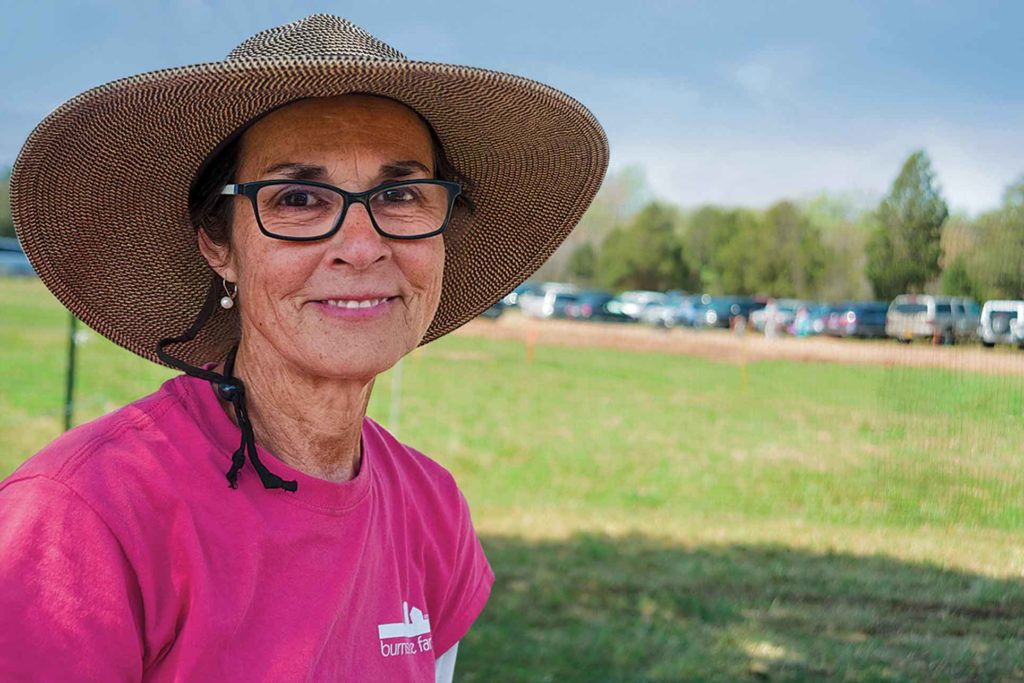 “My mantra here, my little motto, is ‘Food for the body, blooms for the soul.’”

The blooming bonanza covered eight acres last year, including daffodils and some additional bulb plants like muscari, all planted on 40-inch or 48-inch beds. Michael handles most of the farm’s agronomics. Leslie does much of the marketing.

Evolving farm. The farm, now sporting many five-star reviews on Facebook, remains a work in progress. Several years ago, the Dawleys sold organic vegetables in a roadside market. That was a bit too much of an economic struggle.

“We thought we were going to pot them and sell them to garden centers. But we changed our minds and, on the home farm, planted them along the roadside and said they were pick-your-own tulips. We really fell into the tulip business. We were more into greenhouse growing of flowers.”

They figured if the idea could work with crops like strawberries and apples, why not tulips? Come spring and tulip blooming time, the pick-your-own field filled with people wandering around, taking pictures, spending hours among the blooms.

“We kind of lucked out that first year. The tulips bloomed during Easter week, so people had time to come out to the farm. It was an interesting thing to watch. People loved it. We said we were onto something here, and we’ve got to figure out how to make it work. We thought there would be some interest but it turned into a much bigger thing than we thought it would be,” Leslie says.

Steady growth. The Dawleys increased tulip plantings steadily year-by-year until hitting the million bulb mark in 2016. They had more than 200 varieties of tulips and 30 varieties of daffodils.

“The peak bloom season changes from year to year. Tulips bloom based on soil temperature. We’ve had it as early as March 27 and as late as April 19. The season lasts three to four weeks, and sometimes can go right up to Mothers’ Day,” she says. 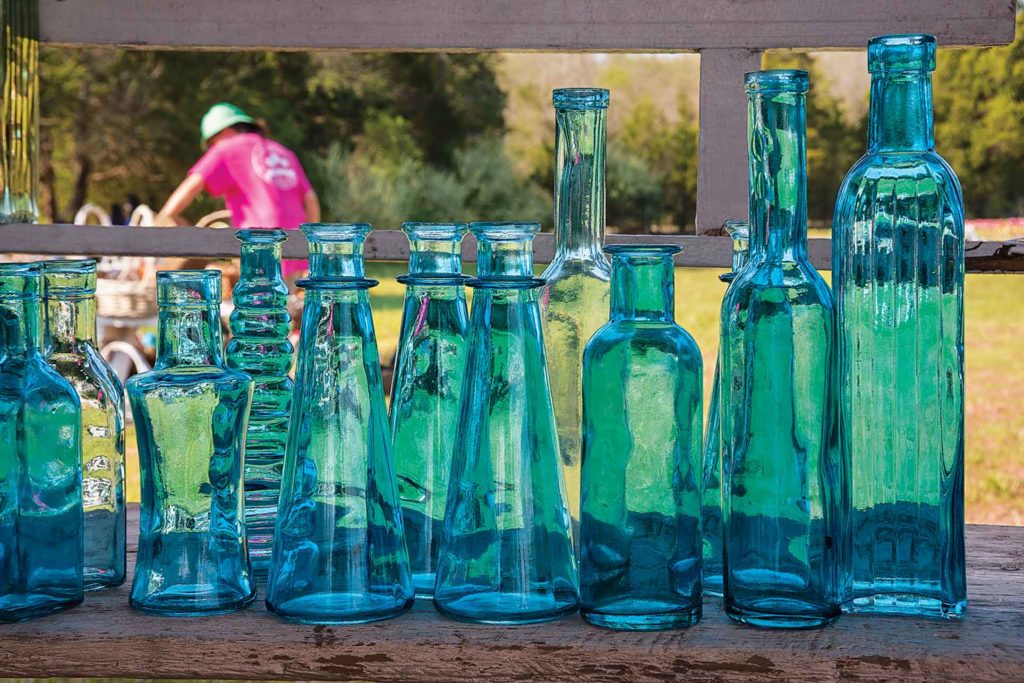 “It makes marketing kind of tough. We don’t know when peak bloom will be until we’re just about there. Some people want to plan photography trips to coincide with the tulips. It’s difficult to know just what to tell them, based on temperature. It’s a lot of work and not much time to sell it.”

Daughter of a Methodist pastor who frequently moved throughout Virginia, she knew little about farming but was determined to give it her best shot.  For quite a few years, she ran a flower shop in McLean, Va., selling flowers and staging events in the Washington, D.C. area. When they bought the farm near Haymarket in western Prince William County in 1995, they grew flowers for that business.

After losing the lease on the flower shop, the Dawleys concentrated on the farm. As the tulip business grew, their home farm couldn’t contain it and the number of people it attracts. They leased another farm for the tulips. Then, after the 2017 season, they lost that lease when the property sold, certain to soon be developed into housing.

By Christmas, the Dawleys were finalizing a lease on a new farm but weren’t yet ready to release the details. “It’ll be a good location, a better parcel of land. We wanted access to water, electricity and a barn. We wanted open space, so people can come to the tulips and feel that they’re spending the day in the country, away from city life. In this part of Virginia, there aren’t many open spaces any more. There aren’t many farms left,” she says.

Watch families with children romping among the tulips on a sunny spring day, and you realize how much urbanites crave that country experience. A day out here really does mean blooms for the soul, and she’s determined to keep it that way.

“People love being out in the countryside. I love it, too. I want the farm to be secluded, with no houses in the background. I want to it be something most people don’t experience very often any more. There’s something about being out in the wide open spaces that is just special,” she says.

She gets out and walks among the visitors, offering a few tips on the proper way to cut tulips, smiling at children, chatting with mothers who seem unaware that they’re talking to the farm owner. The visitors speak an array of languages among themselves, but all enjoy the beauty of Mother Nature.

“There are a million tulips planted here but we’ll never sell a million tulips. We actually sell a fraction of that. You can visit every four days during the season and the field will look different because different tulips are blooming. We have early, mid-season and late tulips. We want the blooms there for people to have the full experience. We want them to go home and tell people about it. We want the photographers to have plenty to photograph,” she says.

“If we sold all the blooms, that defeats the purpose. Yes, we are selling blooms but, more than that, we’re selling a fun experience. It’s really the experience people are paying for.” 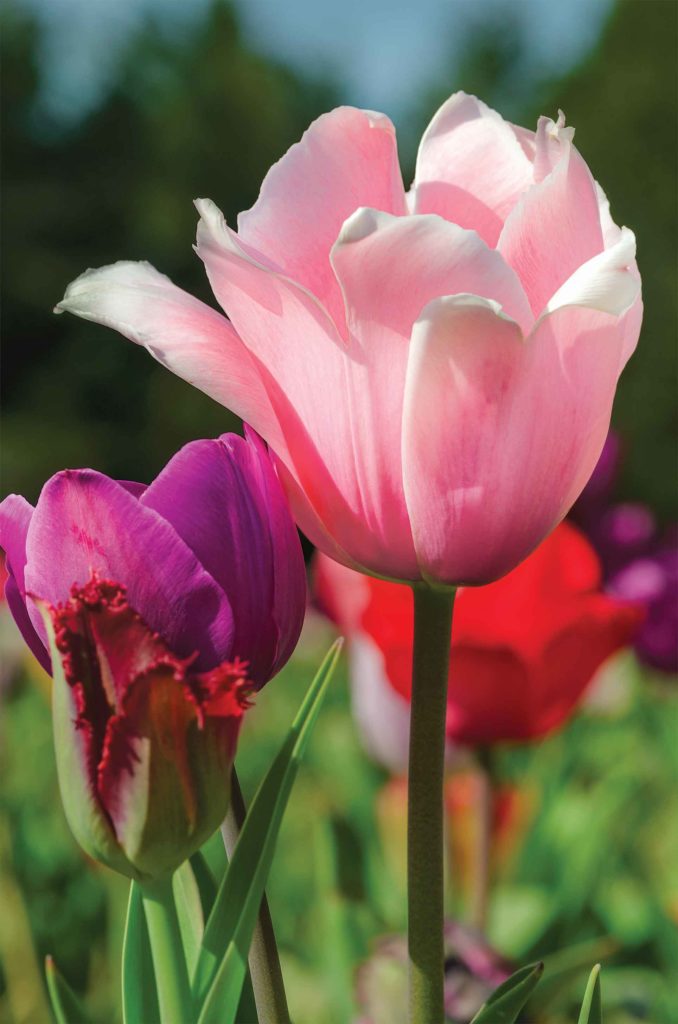 About a million bulbs of 200 tulip varieties burst into bloom at northern Virginia’s Burnside Farms.

That explains why the farm also has a large inflatable children’s slide and other things to do.

“Let kids be kids and have room to play. They can run around here and the mothers don’t have to worry about them every minute. This is fenced and protected. Employees watch what’s going on. I want this to be a safe place for families,” she says.

That rural atmosphere affects people in myriad ways. Dawley discovered that some people come here to propose marriage among the blooms, and several have done just that.

“I’m just so happy that people share my passion for flowers. I was blessed for years to own a great flower shop and put on events for a lot of famous people in the Washington, D.C. area. I’ve always had a passion for flowers. I have flowers in my home year-round. I need a little bouquet to make life enjoyable. Flowers fill my heart with joy. I’ve been blessed to do what I wanted in my life,” she says.

True enough. Her nose for business showed itself early on when, as a third grader, she made pot holders and sold them door-to-door, the first of many creative entrepreneurial efforts.

“Every year is a challenge with the tulips,” she says. “There’s nothing easy about doing tulips. It’s hard. But I still get a lot of enjoyment from it.”

Happiness Is A Horizontal Hive

"...keeping bees can be simpler than growing tomatoes...".