Nearly anything can be garden art!

Nearly anything can be garden art!

The driftwood bird stands watch over the garden from its perch on top of an archway. A child’s toy plastic chimpanzee that once arrived in a load of leaf mulch clings to the sides of a metal cage like King Kong. Little touches of “found art” like these have turned Waterloo, Ontario writer and avid gardener David Hobson’s amazing backyard garden into a place of whimsical delight. It’s filled with surprising little touches everywhere you look.

“The glass telegraph wire insulators (found throughout the garden on stakes and trellises) came from my wife’s grandfather’s farm.” Hobson says.  “The farmhouse was sold after he passed away and I decided to keep a couple of them. An old telegraph ­— figured he might be able to reach us one day.”

Artwork has been used to enhance gardens for as long as people have kept them. In western cultures, garden art can be traced back to antiquity. The ancient Greeks and Romans put up statues of their heros and gods in an enclosed courtyard known as a Peristyle Court. Centuries later the Italians started incorporating the Classical statuary they found in the ruins surrounding them into their formal Italianate gardens. They remained a popular feature in all public and private gardens in Europe right through to the dawn of the 20th Century. 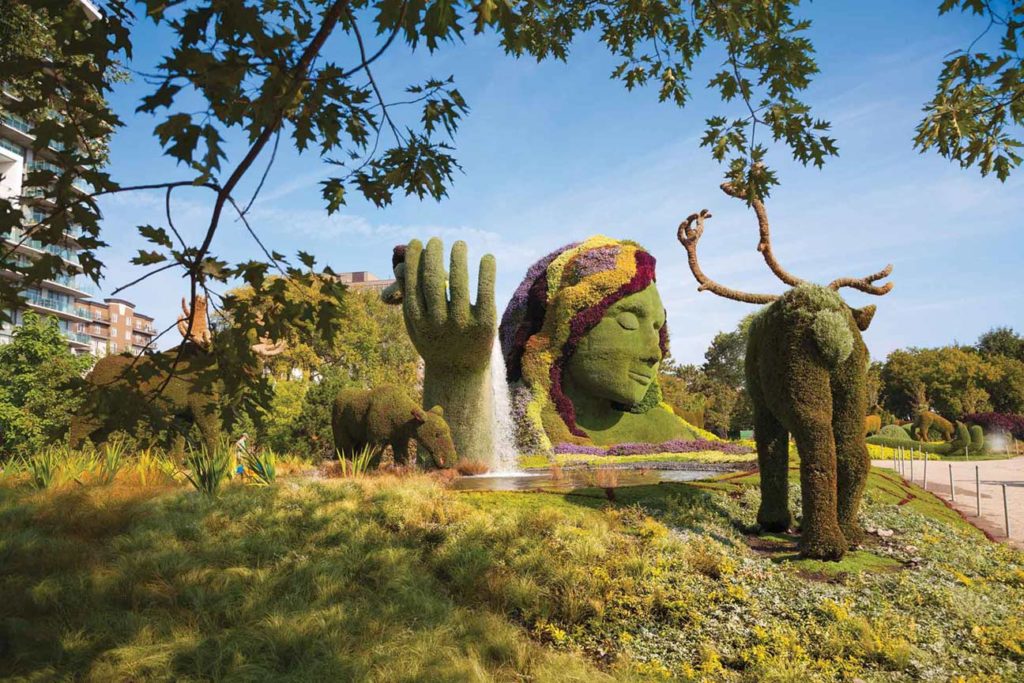 The massive head of Mother Nature provided a centerpiece for the vast MosaiCanada 150 installation in Gatineau, Quebec in 2017. It’s made from tens of thousands of small plants mounted on a steel frame.

“Around 1899 French artist Auguste Rodin’s work changed the approach to sculpture,” Hobson says. “Since then every form of material and abstraction you can imagine has been created for gardens. If you can name it, it can go in the garden.”

Public art. Art in public parks and gardens remains as popular and sometimes controversial as it ever was. Almost every city in North America has a few statues in their parks. More and more cities, like Cambridge, Ontario, are establishing formal sculpture gardens in public spaces, too.

Public art is often used to commemorate major events. A good example was a vast installation piece called MosaiCanada150 built in Gatineau, Quebec across the Ottawa River from Canada’s Parliament buildings in 2017 as part of Canada’s 150th birthday celebrations. The living sculptures, constructed with millions of succulents and other plants on steel frames, depicted historical events and Canadian culture and attracted 1.3 million visitors. It was so popular that there are plans underway to turn it into a more permanent exhibit.

Bought, found or made. Art in the 21st century can be pretty much anything you bought, found or made, as long as you define it as art. Your friends and family might question your taste and judgment but in the end yours (and perhaps your spouse’s) is the only opinion that matters. If you say it’s art, it’s art. You’re not limited to recreations of classic Greek statues of the goddess Venus.

One could call the boom from Hobson’s original windsurfer  that’s propped up in his garden a sculpture. Or the barrel hoops that his son shaped into a sphere. However the most common artistic touches found in his garden are the many concrete hats that he uses as planters for succulents. 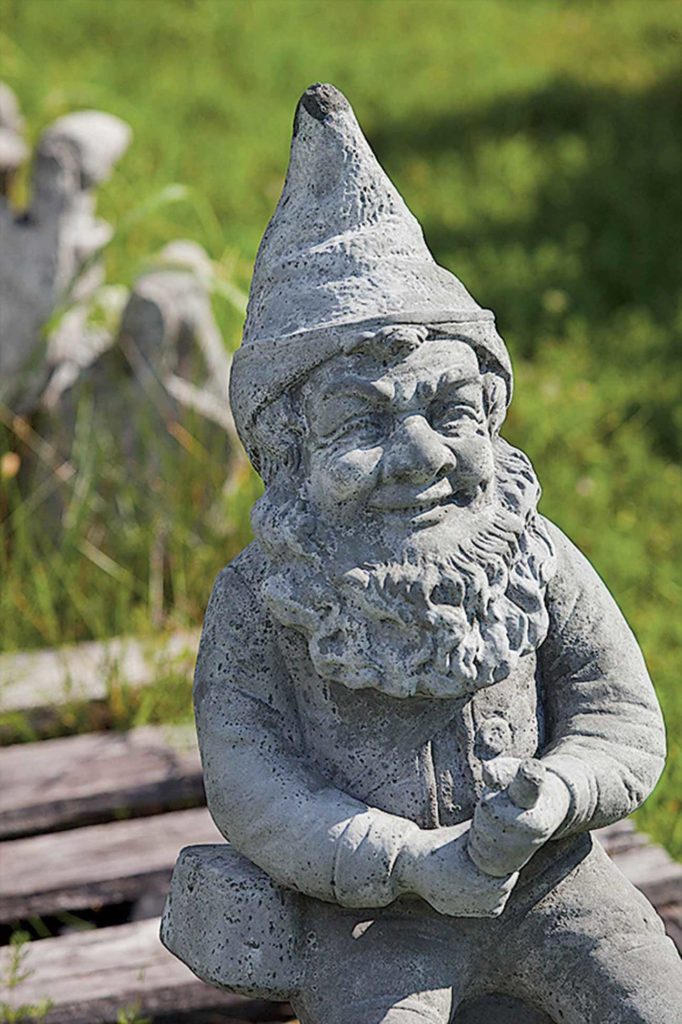 “I pick up old straw hats and coat them in concrete,” Hobson says. “Once the concrete dries, I peel off the straw and I have a planter. It’s simple.”

Vast array of options. Since gardeners have so much artistic license, they’re incorporating everything from pink flamingoes to orcs from “The Lord of the Rings” into their home garden designs. Molded concrete garden sculptures of all different types and sizes are readily available. Plus, there are vast numbers of outdoor art items for sale in garden centres or available from online sources like Amazon.

“Most garden designers believe that a piece of garden art should complement its setting and not dominate it,” he cautions. “So before you buy an expensive concrete statue take a moment to consider whether or not it has the right scale and texture to complement your garden’s theme.”

Placement matters, too! Hobson frowns at the idea of just plonking anything down in the middle of the yard without putting a lot of thought into it.  A group of fake deer can be delightful on a rural property in the early morning mist, Hobson says. But in the harsh midday light, they’re still plastic deer. 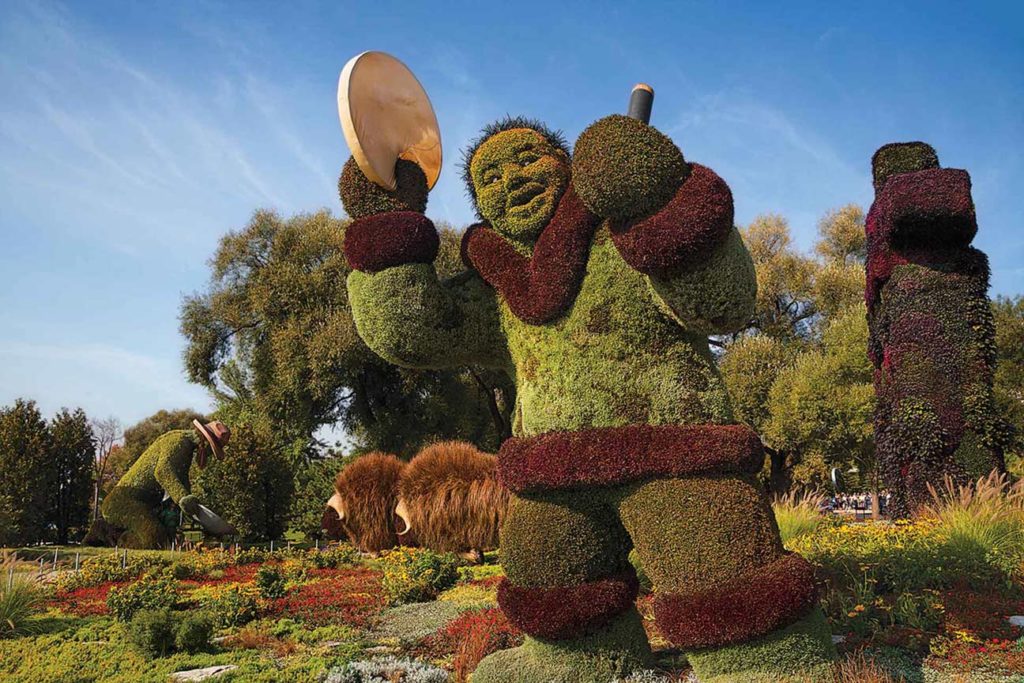 Personally he chooses to place his artworks in spots where appearance will change as the plants grow around them over the growing season. For example he has a white Bas-relief of a man’s face hanging on his barn board fence; as the Boston Ivy grows randomly along the fence during the summer the foliage will slowly surround it until the face nearly becomes hidden.

Sharp-eyed visitor. Hidden discoveries are a recurring theme throughout Hobson’s garden. His garden gnome starts the season bold as brass, practically daring anyone to invade his space. It becomes steadily more shy as the season progresses.  By midsummer only the sharpest eye can occasionally spot it peaking out from under the hostas.

The garden gnome’s origins can be traced back to classical German fairy tales. According to legend, gnomes lived underground and turned into stone if they were caught out in sunlight. They became popular in Germany in the mid-19th century and have spread around the world from there. 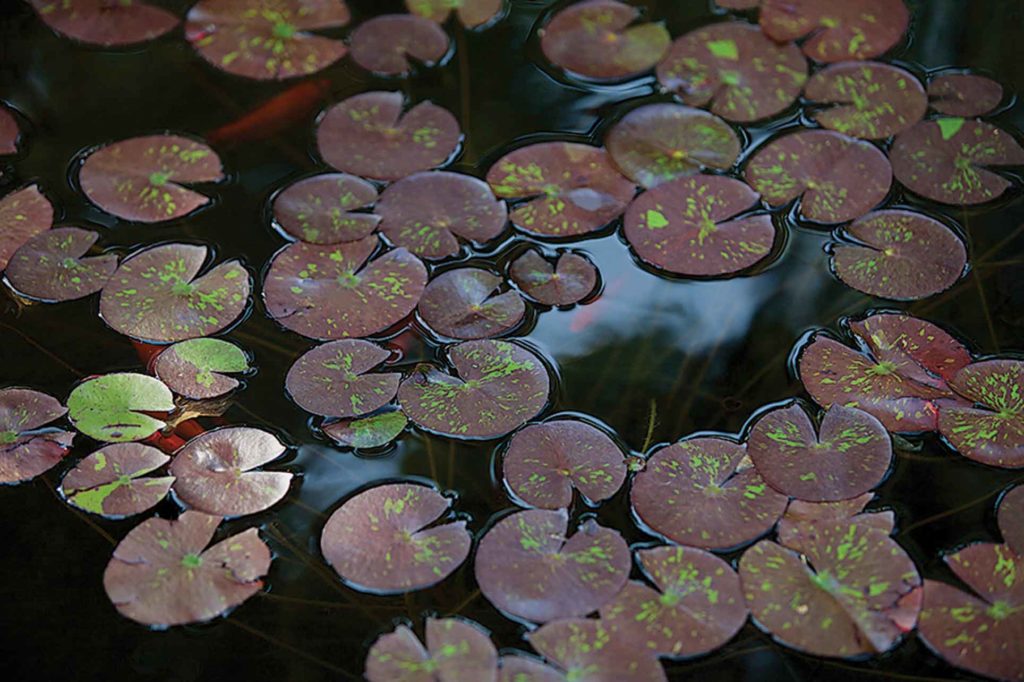 Garden gnomes may be considered a bit kitschy by the high art crowd, but people love them. They’re the undisputed superstars of the garden art world. Garden gnomes are the only ornaments to have been featured in two animated films in the past decade. Gnomeo and Juliet hit the big screen in 2011 and the newest one, Sherlock Gnomes, is expected to be in the theaters in March, 2018. Even the venerable Chelsea Flower Show, held each Spring in the United Kingdom, had to bow down to public pressure and agree to lift its century-old ban on gnomes in their floral displays in 2013.

“I’ve always believed that a garden is your personal space so you can put anything you want in it,” Hobson says. “All that glittery and shiny stuff you can find in the garden shops might be fine for some people’s tastes, but it’s a bit too much for me.”

Hobson’s entire garden is a work of living art but he does have favourites. He likes the dry stone wall he built with stones his neighbour was throwing away. Another is sitting on a bench, watching the fish swim and listening to the sound of the water.

“I’m not one of those who sits in their garden for hours on end, though,” Hobson says. “I’ll come out each morning, walk around and tend to what needs to be done. I’ll go inside and lie on the couch to read a book…it’s much more comfortable.”

Happiness Is A Horizontal Hive

"...keeping bees can be simpler than growing tomatoes...".