Mac McAnally waited for me in the parking lot of Spark’s Restaurant, tucked behind the wheel of his dusty black Suburban. The trusted tools of his trade – a pair of steel string Olson and MacPherson acoustic guitars, a gut string and an octave mandolin, a National resonator, and a Peavy electric guitar – were stowed carefully behind him.

On this particular Sunday afternoon last June, I could, with a little poetic license, imagine that Mac’s guitar strings were still warm from the previous night’s performance down the road at the University of Mississippi. In Oxford, he had performed at last night’s Governor’s Concert at the Mississippi Bicentennial Celebration North.

“So here we are, Mac,” I said, “Back where you come from. Belmont, Mississippi.”

Gentleman that he is, Mac grinned politely through his beard at the heavy-handed reference to the song he crafted nearly three decades earlier.

Mac’s “Back Where I Come From” charted at 14 on the country charts in 1990 but, when Kenny Chesney included a live version in his Greatest Hits album ten years later, the song’s ode to simple hometown pride found an even greater audience.

With Mac soon celebrating his 60th birthday, “back where he came from” was why I was in Belmont – the unassuming hometown and childhood of the man that, as of the summer of 2017, had claimed an unprecedented eight Country Music Association’s Musician of the Year honors.

And, happily for me, Mac was glad to oblige my curiosity about the one-stoplight town in northeast Mississippi’s Tishomingo County.

Climbing into my own truck, Mac directed me in an easy arc through Belmont, as we drove only a short distance but, simultaneously, passed almost five decades back in time. Pulling out of Spark’s’ parking lot, we rolled past a ubiquitous Sonic Drive-In.

“That’s funny,” Mac mused, “I didn’t even realize there was a Sonic here. I guess that just goes to show you how strong a memory can be. Belmont from fifty years ago is tattooed into me, or I’m tattooed into it. I have a memory of it in my mind and that’s what I see – not the new Sonic, or the Dollar General. I still see the corner drug store.” 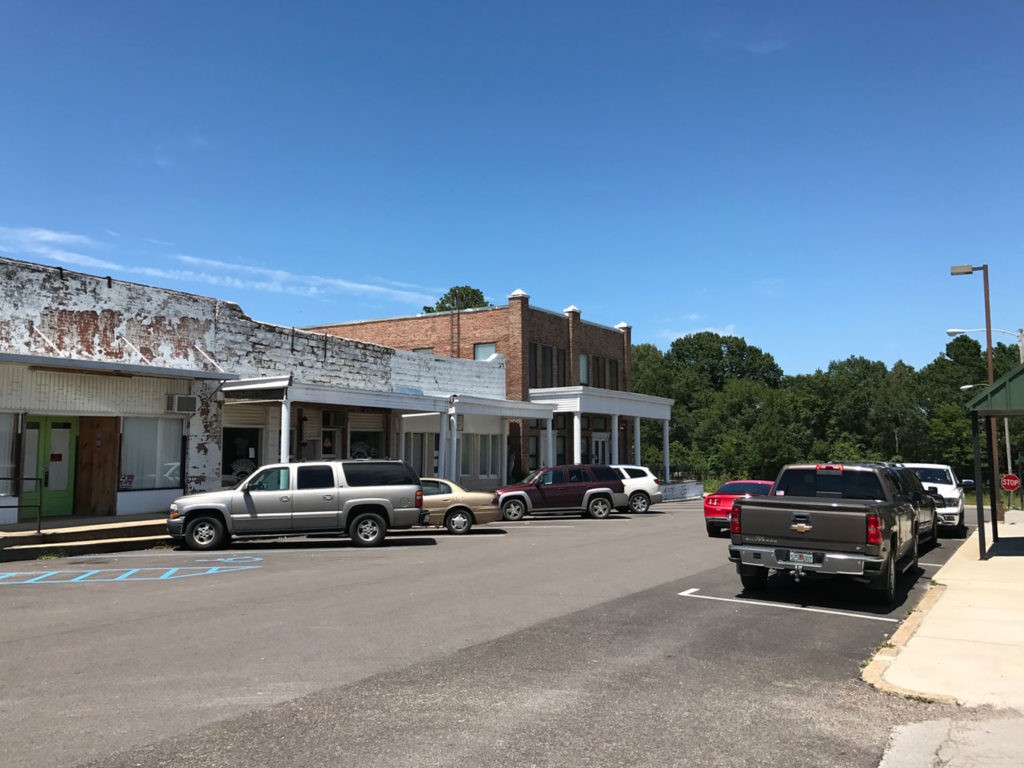 Where he comes from – downtown Belmont, Mississippi, hometown of Mac McAnally.

Our first stop was Belmont’s cemetery, where Mac’s late parents were buried.

“This was my first job,” Mac remembered. “Mowing the grass. With a push mower. The widows would come out and watch me from their cars. I was either not trimming it close enough or I was getting too close to the tombstones. Not an easy job with all that supervision.” He shook his head with a good-natured chuckle.

From there, it was a scant quarter-mile down two-lane Main Street to the First Baptist Church.

“That’s where we went to church,” Mac said as we pulled up under a shade tree across from the church. “My mom played piano for the church, and worked in the Wrangler jeans plant during the week.” Belmont was one of several communities in Mississippi in which the Blue Bell Company had mills that manufacture, among other things, Wrangler jeans.

“They never locked it so I could go in and practice on the church piano at night,” he continued. “If I was careful, I could even sneak my guitar in there as well.”

Leaving the cemetery, we soon reached a collection of low-slung buildings that made up Belmont’s collection of schools. Mac’s father, a World War II veteran, was the school’s principal – which made the next story Mac shared with me all the more surprising.

By the time Mac was in high school in the early 1970s, his budding musical skills had caught the attention of a local gentleman named Shelby Dean Lindley, who fronted a band that plied the honky-tonk trade in the counties north of the Tennessee state line.

Dean paid a visit to Mac’s parents, explained to him that he could make $250 a weekend playing in Shelby’s band, and that, even better, he could learn the craft of being a true performing musician. Most importantly, he solemnly assured Mrs. McAnally that he would keep her son Mac out of trouble.

“The band was called Dean and the Reefers,” Mac grinned. “It was painted on the side of his van. But the only problem was that Shelby had no idea what ‘reefer’ was slang for. He kept wondering why all these long-haired hippies kept flashing him the peace sign.”

Mac’s father and mother – the school principal and the Baptist Church piano player – gave Mac their blessing to join the Reefers and, ultimately even allowed him to drop out of school as his music career continued to expand.

“That was probably not an easy thing for either of them to do,” Mac reflected. “But we all sat down together and I made a stupid, but large, presentation supporting my case – on which they took pity and acquiesced.”

For Mac, his parents’ support was essential. “I wouldn’t have dropped out without their permission. Daddy would have got all the grief,” Mac explained as we continued our loop through town.

We passed Deaton Funeral Home, where a tense knot of men had gathered outside the establishment’s front door.

“Light’s on at the funeral home – who passed away?” Mac said quietly, reciting one of the final lines from his song ‘Barney.’

Then came a row of single-story storefronts, some vacant, some occupied by the likes of Belmont TV and Belmont Florist & Gifts. The block constituted half of downtown Belmont; the other half sat across Highway 25, with the tracks of the Mississippi Central beyond it.

“My dad used to own a laundromat there,” Mac said, pointing to one of the storefronts. “It had big commercial dryers that would collect lint in these huge blocks. And it was my job, one night a week, to take those blocks of lint in the alley behind the store.” 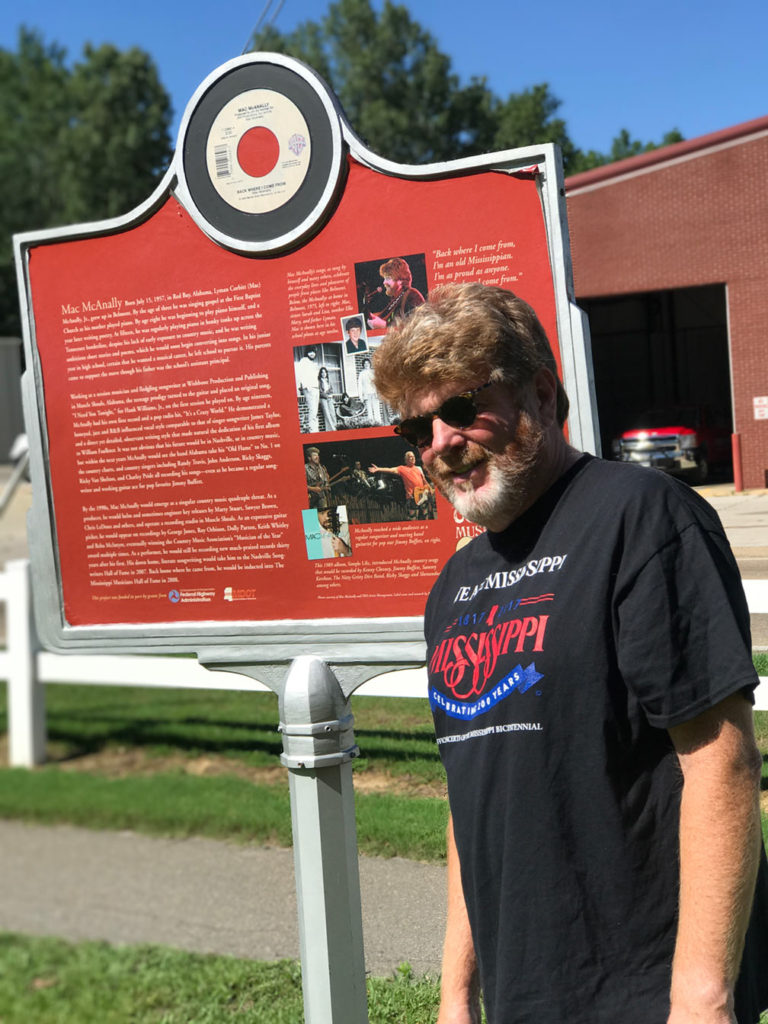 “It’s the only sign in Tishomingo County without any bullet holes in it. Any self-respecting sign in Mississippi’s been shot up at least a half-dozen times.”

“There was only one problem with that,” he continued. “This being north Mississippi, a fair amount of those jeans and overalls that had been washed and dried in our dryers had the occasional .22 or shotgun shell left in the pocket. And those ended up in the lint block.”

“Yes,” Mac chuckled. “We figured what harm would they do back in an alleyway behind a brick building? But I didn’t stay back there with bullets cooking off in the fire. I’d come back in here and play my guitar while it all burned.”

Mac paused for a moment as a memory caught up with him.

“Come to think of it, I had my first paying gig in that laundromat,” he said. “I was in there playing my guitar one night, waiting for the lint to burn, and Carl Brown heard me playing.”

“Carl was an old fellow who would come around every spring with his mule to plow up our garden for planting,” Mac said. “He came on in, listened for a moment, and asked me if I knew ‘Down Yonder,’ so I played it for him.”

“Carl started buck dancing as I played, and he was a good dancer. Some other people out on the street saw Carl dancing and they came on in also. As soon as they did, Carl threw down his hat for tips.”

Mac followed ‘Down Yonder’ with ‘Wildwood Flower,’ Carl kept dancing, the tips kept coming, and Mac kept playing.  By the end of the impromptu concert, there was 54 dollars and change in Carl’s hat – a take that Carl split with young Mac.

Belmont’s city park stood nearby; Mac directed it to me next. We pulled off alongside the grass and walked over to a maroon-colored commemorative marker, texted with gold script. I recognized it as one of the markers for the Mississippi Country Music Trail.

“Lyman Corbett ‘Mac’ McAnally, Jr., grew up in Belmont, where he sang and played piano at the Belmont First Baptist Church before becoming a session musician and songwriter at the age of fifteen,” the sign declared.

“When it says ‘session musician,’ the sign means your time in Muscle Shoals, right?” I asked.  He nodded affirmatively.

“Wishbone Production and Publishing,” Mac said.  I noticed that he had pulled a black plastic guitar pick out of his pocket; he fingered and rolled it absently in his hand as I read the litany of his musical achievements as recited by the sign.

“You wrote “Old Flame” for Alabama, and they took it to No. 1.  You wrote songs for Randy Travis, John Anderson, Ricky Scaggs, and Charley Pride.  For Shenandoah, Sawyer Brown, Jimmy Buffett, and Kenny Chesney.” 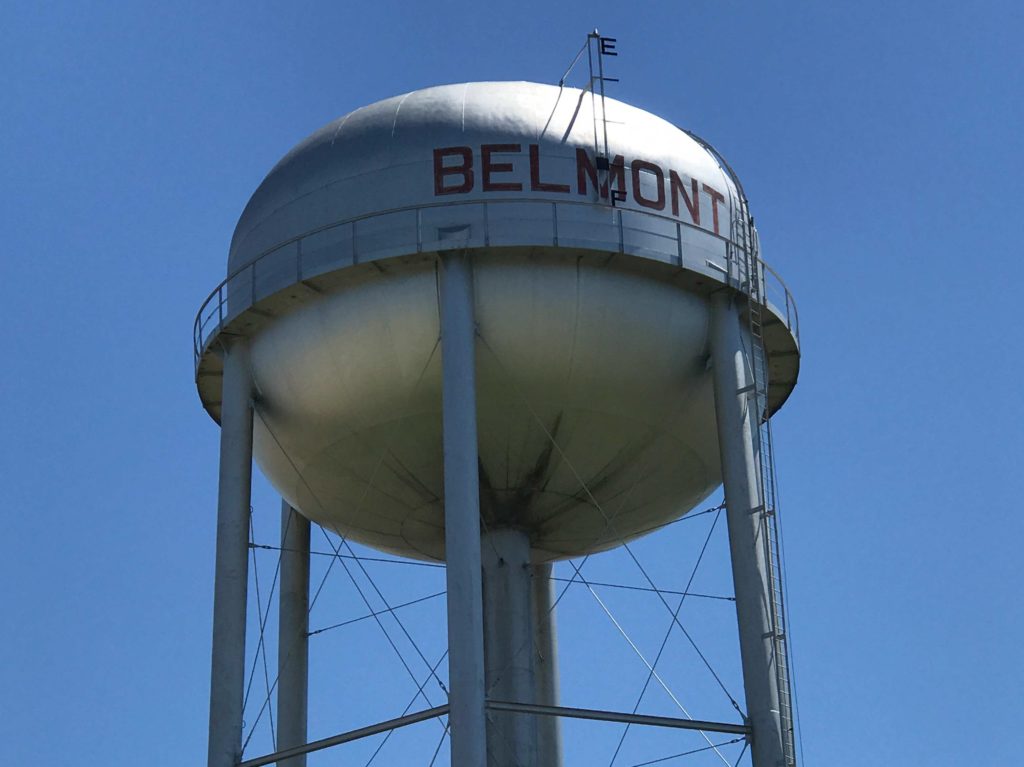 “You’ve played guitar on tracks for George Jones, Roy Orbison, Dolly Parton, Keith Whitley, and Reba McIntyre,” I added. “You hit number one with ‘Down the Road,’ singing with Kenny Chesney.  And you’re about to go on tour again with Jimmy Buffett.”

“Look, Jim, I’ve been so fortunate,” Mac responded. “My life has been like seven or eight key events in a daisy chain of opportunity. And thank God that happened, because I’m afraid I would have accepted defeat at any turn.”

He paused for a moment, and then spoke again.

“It’s a nice sign,” he observed, “but there’s just one problem with it.”

“Look at it,” Mac said. “It’s the only sign in Tishomingo County without any bullet holes in it. Any self-respecting sign in Mississippi’s been shot up at least a half-dozen times. Heck, I was looking forward to being the first person to shoot it. After all, it’s my sign.”

“But then they went ahead and put it up in the middle of the park, right across from the volunteer fire department,” he sighed. “No way I can shoot it now.”

As we turned to leave, the guitar pick with which Mac had been fidgeting fell to the ground. I reached down to pick it up.

“No, leave it there,” Mac said. “Maybe someone will come by and find it and pick it up. It will be good luck.”

I left Mac back at his truck; I returned to Birmingham, and he headed on to his home and studio in Sheffield, Alabama, where he was putting the finishing touches on an album he was producing for Ned Ledoux. Within two weeks he’d be on the road with Jimmy Buffett for another summer tour.

Later, autumn brought Mac a ninth title as the Country Music Association’s Musician of the Year award; only a week afterwards, however, a heart attack struck him while he was in Nashville.

Mac and I exchanged texts as I was finishing this article, and I asked him about his recent brush with mortality – and if that brought his hometown into any sharper focus.

“As for not seeing home and family again, it certainly crossed my mind,” Mac reflected. “But I am someone with a real good picture of both wherever I go. I come from a good place and I plan on ending up in a real good place.”

After an afternoon with Mac in Belmont, I think I would agree with him on both accounts.