Restoring soil - and soul - on a Texas ranch.

Restoring soil – and soul – on a Texas ranch.

Beef cattle, blueberries—and biodynamics. Those are the three topics that drive Bill McCranie and his constant companions, a couple of dachshunds named Thibodeaux and Boudreaux, as they tend a central Texas homestead near the town of McDade.

Bill and his wife, Nancy, spent the first seven years of their married life traveling around the world, backpacking through just about every part of the globe except Antarctica. Then they settled down on a 72-acre patch of sandy soil east of Austin to carve some fields out of the brush and timber, build a house, and raise a family. “We got certified organic right away,” Bill recalls. “But then I learned about biodynamics. I attended a conference in Virginia at the Josephine Porter Institute for Applied Biodynamics, and that experience changed my life,” he says. “It felt just like coming home.”

The logical follow-up question, one that Bill has answered thousands of times, is: “What is biodynamic farming?” The textbook answer is that it is a form of alternative agriculture, similar to organic production, with some “esoteric” twists.

Bill’s answer is a little longer than that, though he would rather show you than tell you about the concept of biodynamics. “All I know is that it works,” he says. “My blueberries had been running about 14 on the brix test [a measure of sugar content] and that’s pretty good,” he says. “But after using biodynamic practices I saw some berries up to 19. When I saw that level of improvement in quality, I got into biodynamics hook, line, and sinker.” 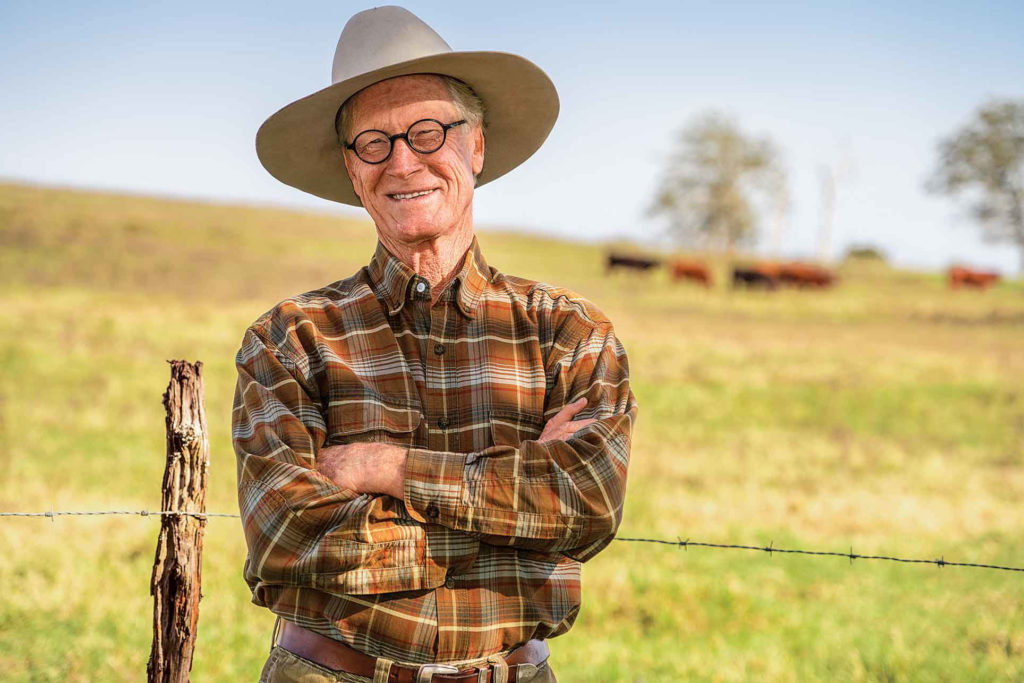 Biodynamics traces its roots to a brilliant and sometimes controversial figure from the early 20th century named Rudolph Steiner. He was a true Renaissance man, making contributions to medicine, architecture, drama, and poetry; he invented the art form called eurythmy; and he developed an approach to education that led to the development of Waldorf Schools.

Austin, Texas, has a Waldorf School, and it was some “Waldorf moms” who came to pick blueberries at the McCranie’s patch who told Bill about Steiner’s agricultural approach. Steiner gave a series of eight lectures, called the Agriculture Course, in June 1924, less than a year before he died. His lectures were stern; Steiner felt that agriculture was taking the wrong direction by using “dead” mineral fertilizers.

He warned that the earth is a living being, but is in the process of dying, with the forces of nature retreating from their previous roles. Steiner offered solutions to restore these natural forces “so that the earth may be healed.”

Horns and humus. That’s where the “esoteric” part of biodynamic agriculture sets in. Steiner’s recipe for building the soil called for the use of nine biodynamic preparations; preferably applied in accordance with certain celestial relationships—similar to the signs of the moon, but more detailed. These preparations range from BD#500, cow manure packed into a cow horn and buried during the winter months, to BD#508, a tea made from the horsetail herb, Equisetum arvense. These preparations typically are sprayed on crops, or are used to help biodynamically improve compost.

Bill makes some biodynamic preparations on the ranch, such as BD#501; that involves grinding quartz crystals into a fine powder, packing the powder into a cow horn, then burying it through the summer months. Upon retrieval, the powder is applied as a spray supplement.

While the concept of filling a cow horn with manure and burying it may sound esoteric (to say the least), biodynamic agriculture shares many concepts with organic production—and even the soil health movement that is gaining strength on large acreages involved in commercial agriculture. 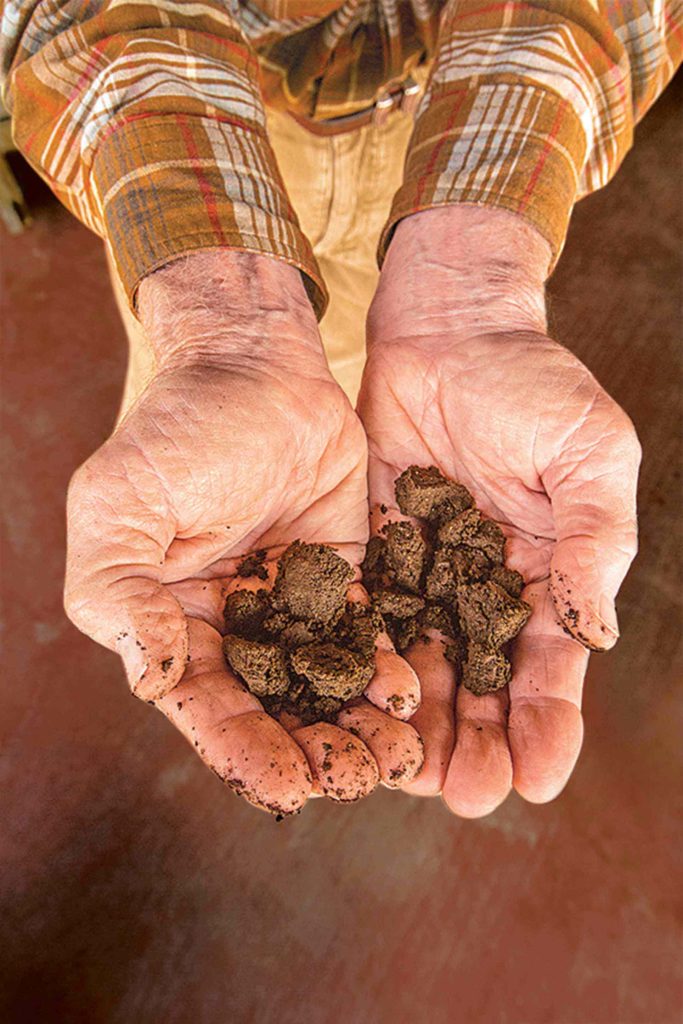 Dexter beef. The McCranie’s land—including the 72-acre homestead plus a 57-acre pasture—is Stellar certified organic as well as Demeter Certified Biodynamic. The McCranies raise Dexter cattle, a small-frame Irish breed, and produced the first certified biodynamic calves in Texas. Bill is beginning to sell beef direct to customers. “We worked hard to find a local facility that could process the smaller Dexter carcass into the cuts of beef we wanted,” Bill says. “Now we have that figured out, so we are starting to sell through farmers markets and other avenues.

The biodynamic certification comes from Demeter USA, the American representative of Demeter International, the oldest ecological certification organization in the world. Demeter points out the value of integrating livestock into a farm. Improving soil health is one of the pillars of the Demeter Biodynamic Farm Standard; integrating livestock, building compost, and utilizing cover crops help provide on-farm fertility, the organization says, thus helping build a healthy, vibrant soil.

Demeter also points out that this approach helps draw down atmospheric carbon and sequester it in the soil; and soils that are richer in carbon also are more resilient, since they infiltrate and store more water, and are better able to handle flood or drought.

Another pillar of the Demeter biodynamic standard is food quality. While quality is a hard metric to measure, the certification agency describes carbon-rich soils as being full of minerals and trace elements that the human body needs, resulting in delicious and nutritious food. Demeter also provides processing standards for foods made from biodynamic ingredients: “this provides a real foodie standard for food production,” the organization says.

For McCranie, it is all about quality of food. “We’ve seen it firsthand, and the people who buy our blueberries and our Dexter beef keep telling us that they enjoy the flavor,” he says. “That really encourages us to keep on going with our approach to biodynamic agriculture. Really, all we are doing is building the soil and feeding the microbes, and it all falls into place from there.” 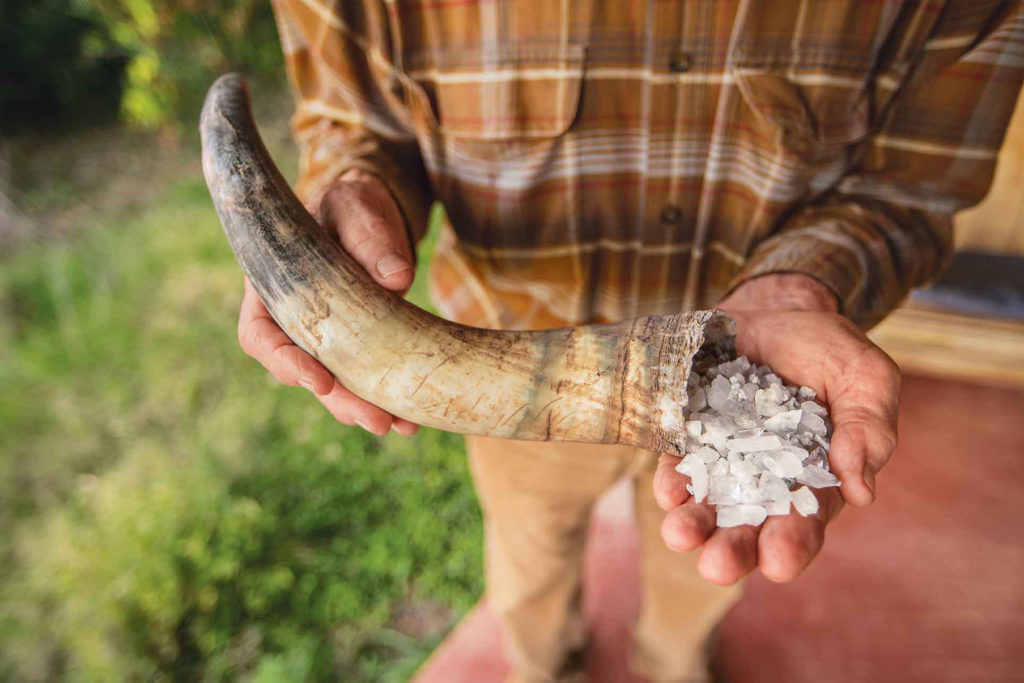 Biodynamic preparations include BD#501, which is fine silica, produced by grinding crystals such as these, then packed into a cow horn and buried during summer months.

Keep learning. The biodynamic approach to agriculture involves a number of intricacies; biodynamic growers are encouraged to plant according to the rhythms of the moon and stars, for example, as well as other members of the solar system, against a background of the entire cosmos. Fortunately, there are biodynamic calendars that help identify the best times for planting and harvest of various crops. “I really don’t have time to study all this, so I use the calendar,” Bill says.

But Bill continues to learn about the ways of biodynamic agriculture. “You can never learn it all,” he says. He had a valuable opportunity to learn directly from Hugh Courtney, a leading biodynamic educator who founded the Josephine Porter Institute for Applied Biodynamics. For those interested in the concept, Bill points out that a starting point is jpibiodynamics.org, the Josephine Porter Institute website, or biodynamics.com, the website for the Biodynamic Association.

Rudolf Steiner also made it clear that he felt regenerative agriculture called for a combination of the spiritual and the scientific, pointing out in his Agriculture Course that it would require “a spiritually awakened humanity” to restore natural forces to the depleted soil. The biodynamic farm or garden is an integrated, whole living organism, according to Steiner, with many interdependent elements, including the spirit of the place.

For Bill McCranie, there is a connection between the soil and the soul of a farm or ranch. “I truly believe that if anyone goes into biodynamics with a good heart, someone who wants to help the earth as well as humankind,” Bill says, “they cannot go wrong.”