Vietnam’s cities hum with energy, day and night — motorcycles, cars, bicycles and pedestrians provide the beat for a frantic rhythm that seemingly never relents, not after the sun sets, not after a weekend, and not after a holiday.

Deep in the jungled heart of Cat Ba Island, however, tranquility reigns and on a cool evening in early March the only concern for the staff at the Hoi Lake Farm Stay was dinner. They had five guests for the night, two Vietnamese and three Americans staying in newly constructed suites lining a pristine lake— the whole property tucked beneath the towering limestone peaks that make Cat Ba Island and Halong Bay, in which it sits, one of the great geological wonders of the world.

“Hot pot?” asks on-site manager Sue, suggesting the traditional steaming pot of chicken and fresh vegetables. Hot pot indeed, and an hour later staff and freshly-showered visitors sat down at a long table not far from the action of the kitchen and the pens where pigs, chickens, turkeys, and geese scurried about. ‘Farm to Table’ typically isn’t a long trip in Vietnam. 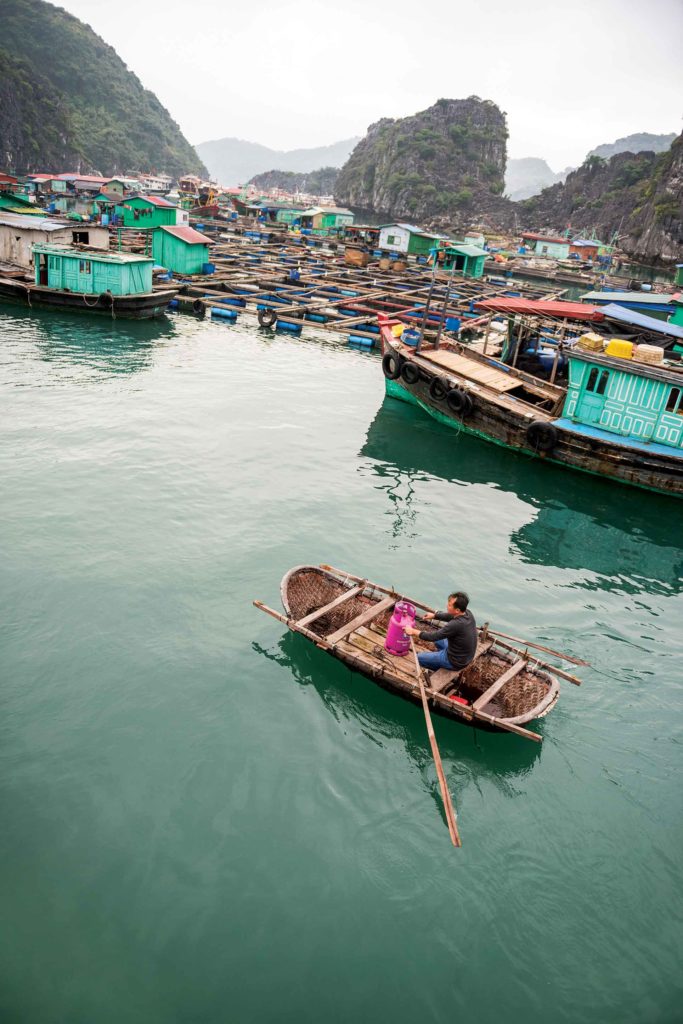 Properties like the Hoi Lake Farm Stay are part of a new wave of development in the Southeast Asian nation. Tourism in Vietnam wasn’t something on the to-do list for many Americans or other Western tourists a generation ago, but the country is embracing the movement now, and along with that has come great growth in the agritourism industry.

Betting on agritourism. Vietnam is in the midst of rapid economic growth, and it has been for three decades as the government has opened trade and established relations with the world. Per capita income in the country has increased by more than 2,000 percent since 1990 as Vietnam has climbed from low-income status to a middle-income level.

Agriculture and tourism have led this economic charge, and the two combined — agritourism —have become ever more important in the nation’s economy. The number of international visitors has tripled between 2010 and 2017.

For government officials looking to continue this trend, agritourism offers real potential. “As an agricultural country, Vietnam has huge potential to develop tourism based on agricultural products — to offer tours that allow visitors to discover the beauty of flowered fields in Da Lat City, coconut forests in Ben Tre Province, and tea hills on the Moc Chau Plateau,” said Nguyen Van Tuan, director general of the Vietnam National Administration of Tourism.

From South to North The potential for agritourism in Vietnam means far different things at various points in the 1,000-mile long country. In the south, the Mekong Delta lingers 125 miles from Ho Chi Minh City, still known as Saigon, as the largest city in the country. There, fertile land has been carved out of a region where, even 100 years ago, large-scale production was extremely difficult in the face of annual saltwater floods. Engineering projects have helped change that, and now it’s awash with production of shrimp, catfish and rice. 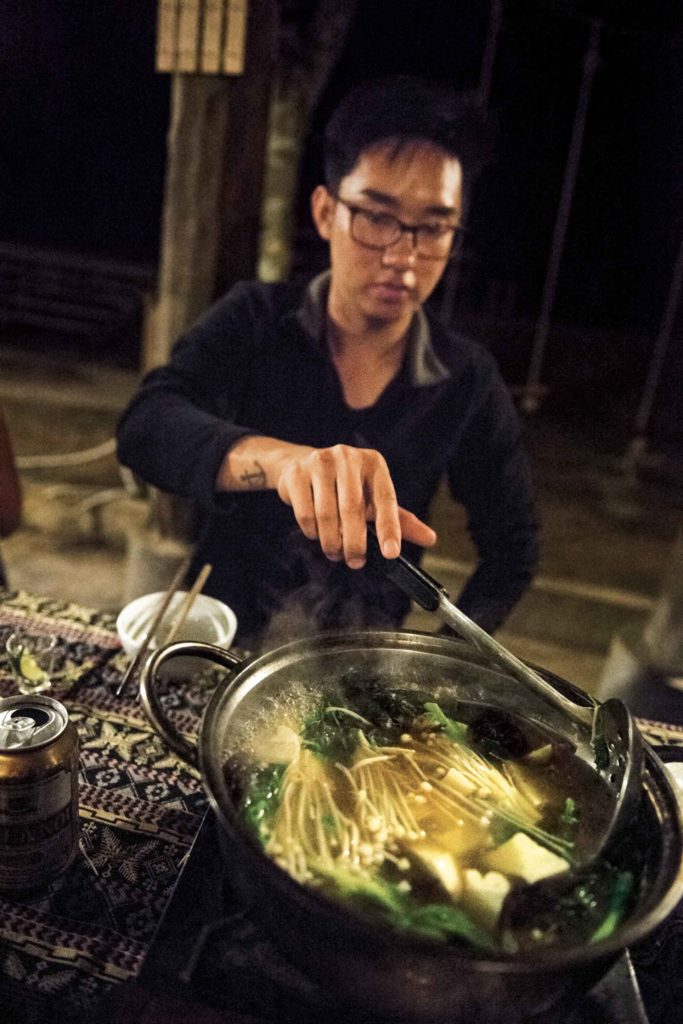 To the north, agritourism is already catching on near the tourist hotbed of Hoi An. The city was one of the region’s premier trading ports in the 17th and 18th centuries and frequented by Chinese and Japanese merchants. The economic activity eventually moved up the coast 20 miles to Da Nang, however, leaving Hoi An a largely ignored backwater, but one that, 400 years later, is well preserved with original architecture that’s a mix of local input and influence from that steady flow of foreign traders.

The main streets have largely given themselves over to tourism, featuring bars, restaurants and tailors’ shops, ready to cut a custom suit at nearly any hour. Every full moon is celebrated with a lantern festival as all the lights along the Thu Ben River are turned off as tourists and locals alike light small paper lanterns and float them out into the river.

An Bang Beach, one of the nation’s most popular, is just a few miles away, and every day hundreds ride bicycles between the city and the ocean. They pass right through the Tra Que village, where tourists often lend a hand caring for and harvesting fields of vegetables and herbs that supply the restaurants in Hoi An.

The limestone peaks. Nowhere in Vietnam has embraced the influx of tourists like Halong Bay and, within it, Cat Ba Island. Agents swarm the tourist districts of Hanoi, 120 miles away, booking bus trips to the iconic bay, which is carved out of the Gulf of Tonkin and the South China Sea. There, nearly 2,000 forested limestone pillars jut from the serene waters, some big enough to sustain small villages but most too small and rugged for a boat to even approach.

The bay was designated a UNESCO World Heritage site in 2000, joining the likes of Yellowstone National Park, Machu Picchu in Peru and Venice in Italy. To see it up close, tourists are herded onto boats to sail between the peaks and unload onto stationary barges, then board kayaks to explore the many caves. At one stop, monkeys keep pace with hikers on a nature trail and snatch the occasional purse or camera bag.

The population of the bay – yes the bay, not the islands—is 1,500. The tourists boats and commercial fishing traffic make their way through hundreds of floating houses­—four entire water-bound villages­—where Vietnamese families fish for more than 100 varieties of fish and mollusks. They even do it with electricity, wired in from floating power plants at the center of the villages, and satellite TV, provided by small dishes attached to the sides of floating homes. 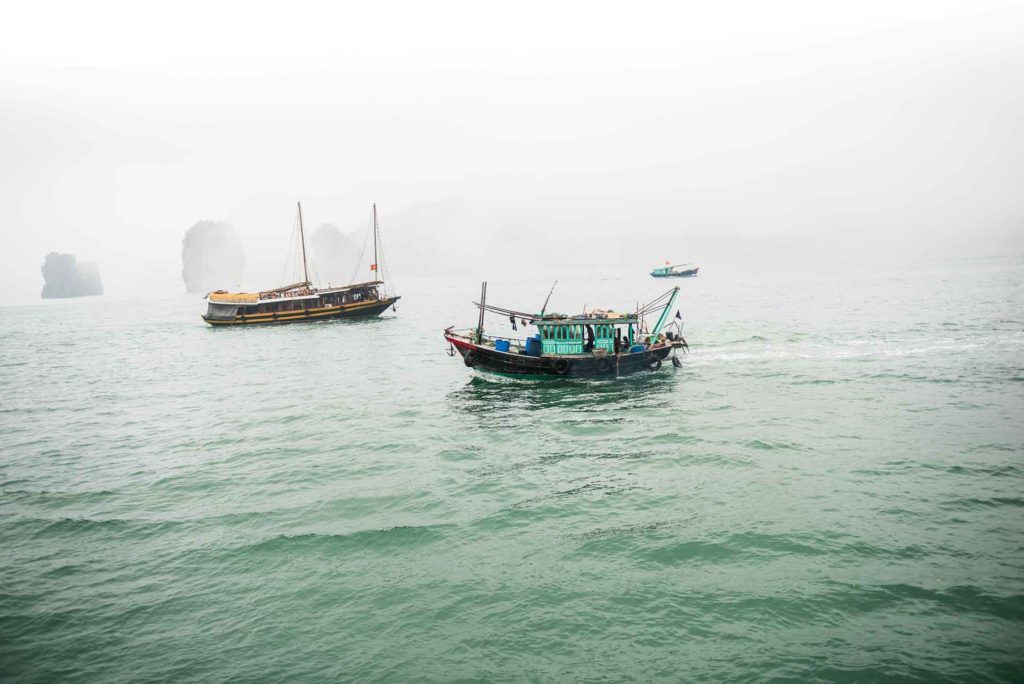 Cat Ba Island is the largest of the outcroppings—big enough to have a town on dry land. If the bay looks like a submerged mountain range, Cat Ba is mountain above the water. The interior is dominated by a lush national park with narrow peaks rising above brilliant green valleys. In one such valley is tucked the Hoi Lake Farm Stay, and a welcoming pot of bubbling hot pot broth.

The staff is like family. Anh grew up in Ho Chi Minh City, then worked in the resort town of Sapa in far northern Vietnam before being hired on at Hoi Lake. Dru grew up nearby, and like so many of his schoolmates he worked the tourist boats in the bay until this opportunity came along. Now, he’s never far from his jet-black puppy, whose name translates to “Ink.”

Sue actually left Vietnam and studied in the United States before coming to Cat Ba Island. Living in upstate New York, she scoured the U.S. for good hot pot—finding none to compare. Perhaps it’s because the ingredients are so close at hand.