Maybe it’s the thundering sound of big waves crashing onto the rocks; perhaps it’s the smell of the ocean spray in the air. There’s something awe-inspiring and primeval about standing up on the cliffs watching a big winter storm pound the west coast of Vancouver Island. For some reason it’s quite a romantic activity, too. While it seems odd for anyone to hope for wild weather on a vacation, the communities of Ucluelet and Tofino have built an entire industry catering to couples coming to witness the power of nature.

Dr. Barb Fehlau and Roland Guenther, a pair of medical professionals from Royston, British Columbia, came to Ucluelet for their honeymoon in October 2017. Fehlau has been coming to the region since she was seven years old. They love to walk the beaches and go ocean kayaking in the Broken Group Islands in the Pacific Rim National Park. But the winter storm season, from November to March, is her favorite time to come to Ucluelet and Tofino.

“The storms are just beautiful to watch,” Fehlau says. “It seems like nothing matters anymore. You’re out there, and you feel the wind, and you see the waves. It’s just like time stands still”. 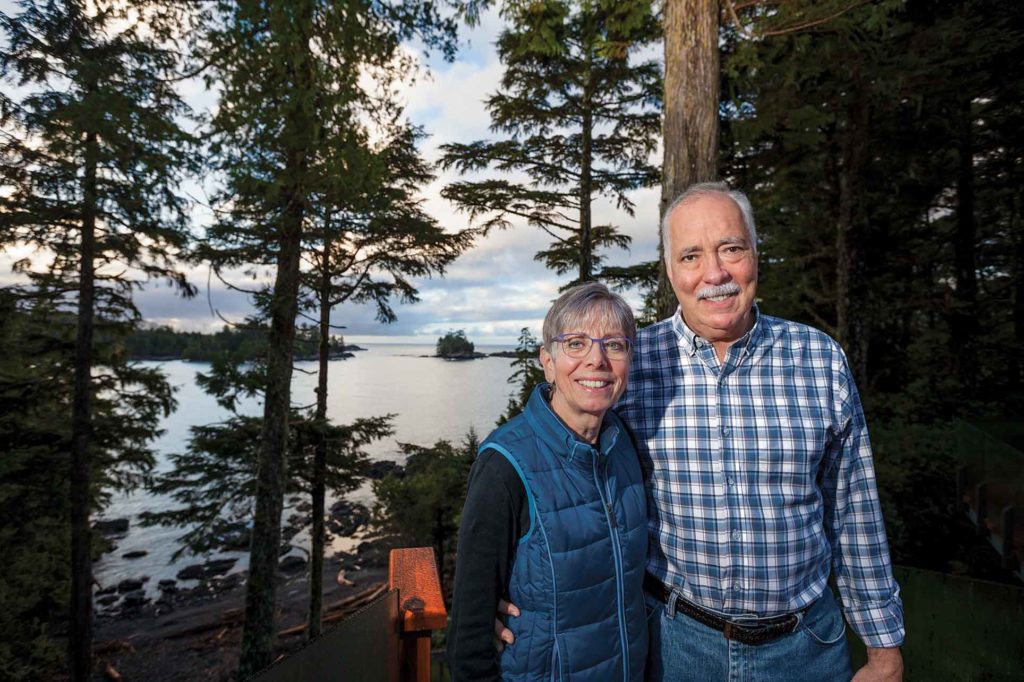 Sue Brown and Drew Fesar fell in love with Ucluelet and bought a B&B, the Snug Harbour Inn, on a leap of faith.

Love at first sight. Sue Brown and Drew Fesar lived in Toronto, Ontario, when they first heard about people going storm watching on Vancouver Island on a television show called The Best Places to Kiss. The couple were so charmed by the scenery that they decided that the west coast of Vancouver Island was a worthwhile destination to add to their bucket list. They went in April, at the end of the storm season. It rained non-stop from the time they landed in Vancouver till they flew back to Toronto, but the couple had the time of their life.

“The waves coming in are nothing like what you would see in the Caribbean where one wave comes in and falls after another,” explains Sue Brown. “During the winter storms, waves crash all over and just explode when they reach and touch each other. The spray can be as high as the tallest tree on the little island we can see from our bed and breakfast (upwards of 85 feet high). The whole ocean looks like someone’s put an immersion blender into it. It’s just bubbling and foaming and crashing, and it’s loud, it’s wet, it’s windy, and you have the taste of the salt from the sea on your lips. You just can’t see waves like this most places on the east coast. As soon as they start to forecast ones this size down in the Carolinas, everyone is evacuated. But here we’re 85 feet above sea level so it’s very, very safe and just so breathtaking.”

The seven days they spent in the region made such a lasting impression on the couple that they shelved their plans to buy a retirement property on Canada’s east coast and decided to look in the west instead. Less than three months after their April visit they heard that the luxury B&B they stayed at in Ucluelet, The Snug Harbour Inn, was for sale by auction on June 7th. Drew jumped on a plane with plans to bid on it. He was approached by the former owner’s real estate agent and made an arrangement to buy it minutes before the auction was to start. The closing date was set for July 1st. 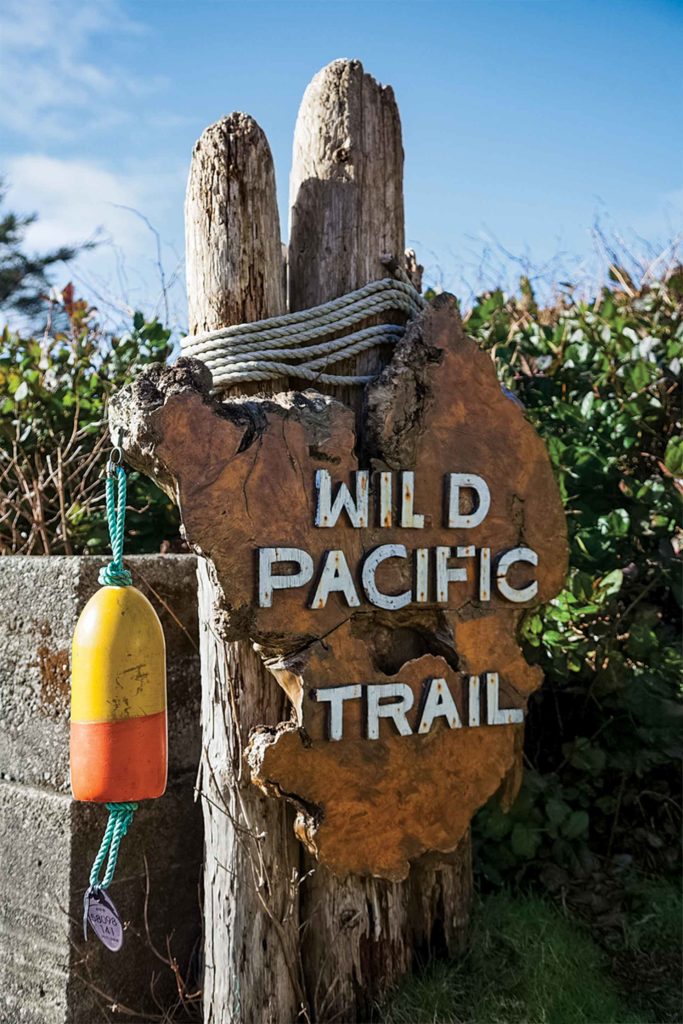 It took “Oyster” Jim Martin years to convince all the landholders and stakeholders that a free public access trail along the coast would be a tourist attraction.Now people can’t imagine
the town of Ucluelet without it.

“At 10:05 my time in Toronto, Drew called and said, ‘Do you want to start packing?’ ” Sue says, “I had my first ever panic attack. I started thinking, Oh my God! What have we done? What have we done? I put in my resignation at work the next day, finalized the sale our house, and we left Toronto on June 24 to drive to the coast and buy the inn.”

The purchase was a huge leap of faith for the couple. The only parts of the inn they’d seen prior to deciding to buy it was their room and the great room that overlooks the beach 85 feet below it. Sue didn’t even know what the kitchen and living quarters looked like until after Drew had made the deal to buy it. Fortunately it had the same views the guest rooms had and weren’t tucked in an out-of-the-way spot like so many B&B owners’ living quarters are.

Still it’s the natural wonders that surround them that makes living in Ucluelet so exciting for the Browns. Sue says it’s like living in a National Geographic video without the worries. They’re surrounded by wilderness with deer, bears, and eagles flying by. They sometimes can even see pods of whales swimming off shore.

Charles McDiarmid, the managing director of the Wickaninnish Inn in Tofino, is widely credited as being the person who put Vancouver Island’s storm-watching tourism industry on the map. Many people believe the inn started promoting it as a way to attract guests in the offseason but McDiarmid insists that it was part of the initial concept and design from the very beginning. For him it was a way to let others share the awe-inspiring natural spectacle he enjoyed at his family’s cabin growing up.

Hoping for a big storm “My parents had built a cabin out on the point past where the Wickanninish Inn now stands,” McDiarmid says. “It was the spot where our family gathered for Thanksgiving, Christmas, New Year’s, birthdays, and so on. Mom would be cooking a turkey or Christmas dinner on the wood stove while we sat there all nice and cozy with the fire on. We would always hope for a big storm because the cabin overlooked the ocean, so we had a great view of the 30-foot waves crashing on the rocks and the spray going 50 feet high. It was mesmerizing to watch them.”

McDiarmid reasoned that since his family enjoyed watching storms so much perhaps others would too if they had the opportunity. So the inn was designed from the ground up to create one of the best winter storm watching locations on the west coast of North America, from Alaska to Mexico. 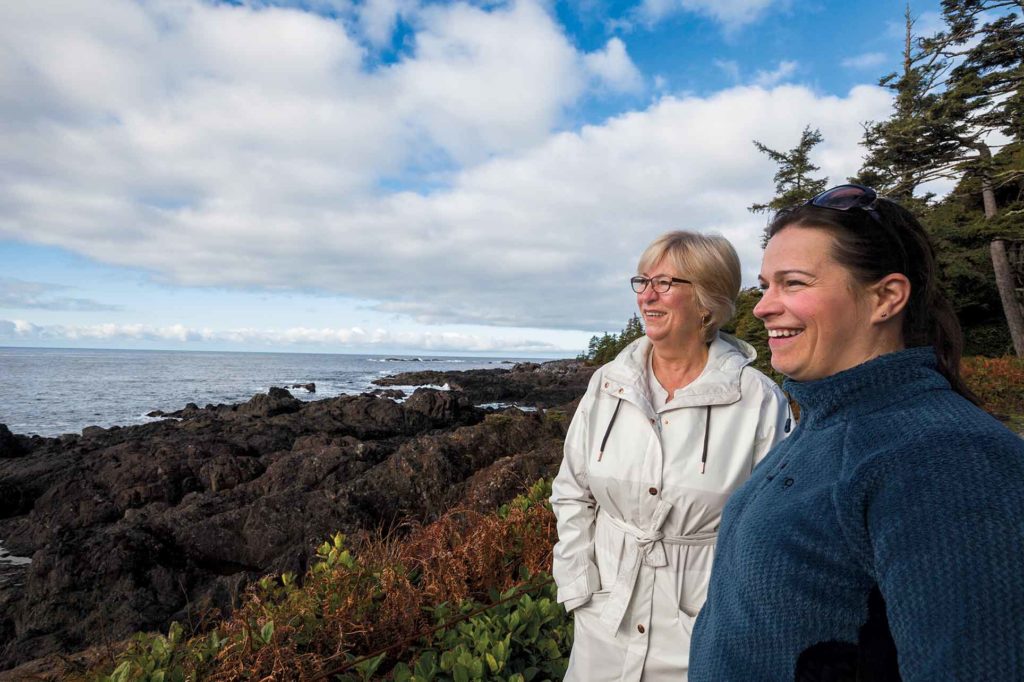 Dianne Saint-Jacques and Denise Stys-Norman recommend storm watchers plan to spend at least three days in the region to maximize their odds of seeing a big waves.

Who would come? “The logging and fishing industries in the area were going through a downturn about then (late 1980s) and both Tofino and Ucluelet were facing economic challenges,” says the Ucluelet mayor, Dianne Saint Jacques. “So we were sitting around brainstorming for other possibilities. Someone suggested winter storm watching jokingly. The initial response was ‘Oh, who’s going to want to come out here just to see that?’”

Storm watching in Ucluelet really took off after the Wild Pacific Trail that runs along the coastline was established. The trail was developed thanks to the vision and determination of an American born transplant to the community, “Oyster” Jim Martin, Saint Jacques says. He often scrambled along the rugged coastline and felt others would love the stunning views too if they could do it without risking life and limb. So he approached the town council in 1988 with his idea to build a free public use trail. The idea was initially rejected, but Martin persevered and eventually convinced the town council—plus all the federal, provincial, private, and First Nations landowners the proposed trail would cross—that it was a good idea.

“Drew and I’ve done a lot of traveling but the Wild Pacific Trail here was probably one of the most amazing things that I’d ever seen,” Sue Brown says. “This little trail is just spectacular.”

The trail is also one of the best places to watch a storm unless there is a truly monster swell, says Barbara Schramm, president of Wild Pacific Trail Society, which now oversees the trail. Usually the safest place is on the high ground around the lighthouse. But in January 2018, it was closed for a few days for safety reasons during a massive storm. The biggest waves ever to reach land swept the coast and were cresting over the top of the lighthouse.

“I went down at the lighthouse with everybody else to watch the waves from the hill up by the lighthouse keeper’s house,” Saint Jacques said. “The waves were coming in to the lighthouse at eye level. Oh, my goodness. Part of you wanted to run but part of you was mesmerized and couldn’t move. The sound of them and the feel of the waves crashing into the rocks with your feet is quite a unique, emotional experience. The power of the ocean and nature really lets you feel how minuscule you are.” 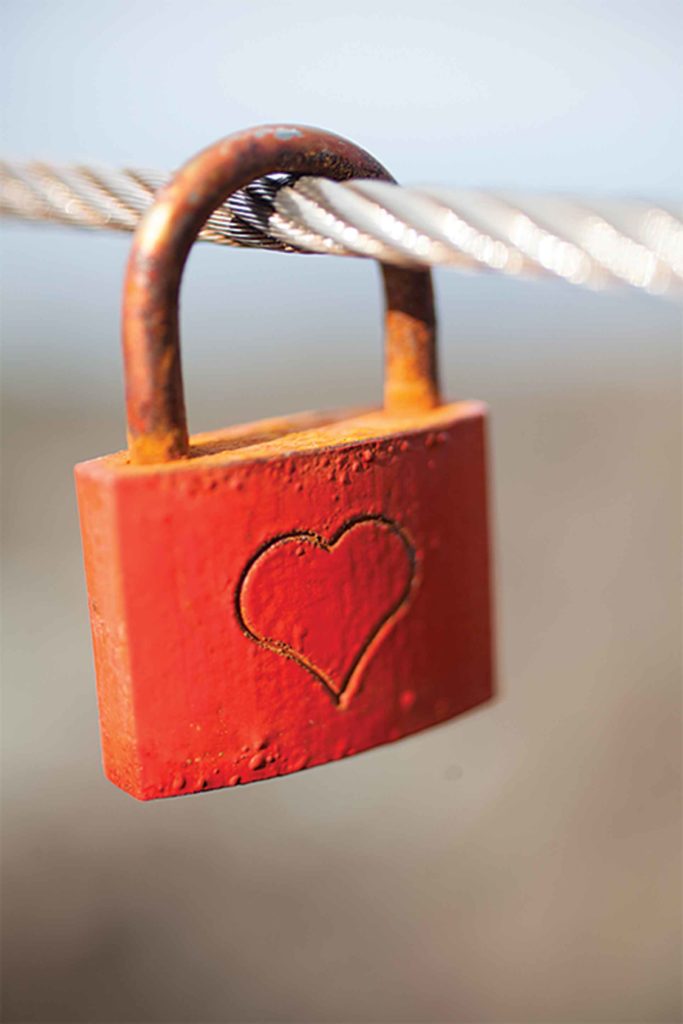 It’s common for couples to leave locks commemorating their love along the Wild Pacific Trail.

Schramm says that as storm watching has become more popular her group has launched an aggressive education campaign so tourists can enjoy the spectacle in safety. It seems to be working because no one has died watching a storm there for several years. But she cautions the rocky coastline is very treacherous in bad weather. There are over 200 known shipwrecks within 100 kilometers.

Hit by a truck “Venturing out onto the rocks or even on the trail can be dangerous during big storms,” Schramm says. “Bare rocks are scoured by waves so they aren’t a safe place to storm-watch. People think they’ll just get a little wet if they are hit by one like they would if they were splashed on a placid lake. No! These waves weigh one ton per cubic meter; it’s like stepping in front of a truck going down the highway. You can’t withstand them.”

Storm watching isn’t for everyone, McDiarmid says. Tofino is not an ideal location to purchase a new Gucci bag. But if you love and respect nature, and want a place to get away and do nothing, kick back and relax, you won’t find a better spot.

If you want to go out and face the storm, you can. If you want to sit back and watch an amazing natural spectacle while drinking a glass of wine by the fireplace in your room you can do that too. “Storm watching is a remarkably romantic thing to do as a couple,” Fehlau says. “There’s just something timeless about it that’s appealing to me. You’re either outside in the storm and enjoying it or you’re staying inside where it’s warm and cosy with the fireplace on,” Brown says. “We’re an adults-only inn so it’s a quiet, romantic spot.”

Better weather forecasts has made timing a visit to the west coast of Vancouver Island to catch a storm a lot easier, McDiarmid says. They aren’t 100 percent accurate but they will let you know one or two weeks out when there is going to be a storm. So if your schedule allows you the flexibility to pick up and travel on short notice, it’s possible to fly here from anywhere in North America within a day. He personally uses the local surfers go-to website, magicseaweed.com, to see which days will have the best waves in the coming weeks.