Nine years ago, in the town of Healdsburg in California’s Sonoma Valley, the lot at 25 North Street near the Village Plaza held an abandoned appliance store. As the local farming economy worked through a romance with tourism that had been blooming by the decade, this was one of the village cornerstones that people wondered about: What would its future hold? Who would do just the right thing there — for the town’s economy and for its people?

Today, the lot is filled with glass, steel, food, and people. It hosts a new building that blends references to the area’s food-growing history with the efficiencies of modern technology. The building backs a courtyard of picnic tables and umbrellas, where on any morning of the week customers huddle in conversation over moon-white mugs of coffee. This Saturday, a man in a striped button down shirt is telling another in black-framed glasses how his pruned apple trees are producing; two mothers are rocking baby strollers with the toes of their shoes, nibbling ginger muffins made with ground millet at the café inside. Shortly, a store clerk emerges through the building’s swinging front doors, unlocks the hinged sidewalls of a vendor cart that’s big as a camper van, and critically eyes the products inside. There are books, work gloves, tools, seed packets…things for both hard-core farmers and backyard hobbyists.

This is one of the latest hotspots in the northern tip of California’s Napa and Sonoma valley wine country. Equal parts produce market, farm shop, provision counter, and café, it is designed, as owners Cindy Daniel and Doug Lipton like to say, for “promoting and celebrating good farming, good cooking, and good eating, and helping people to see the links between those.” It is called, simply, “SHED.” 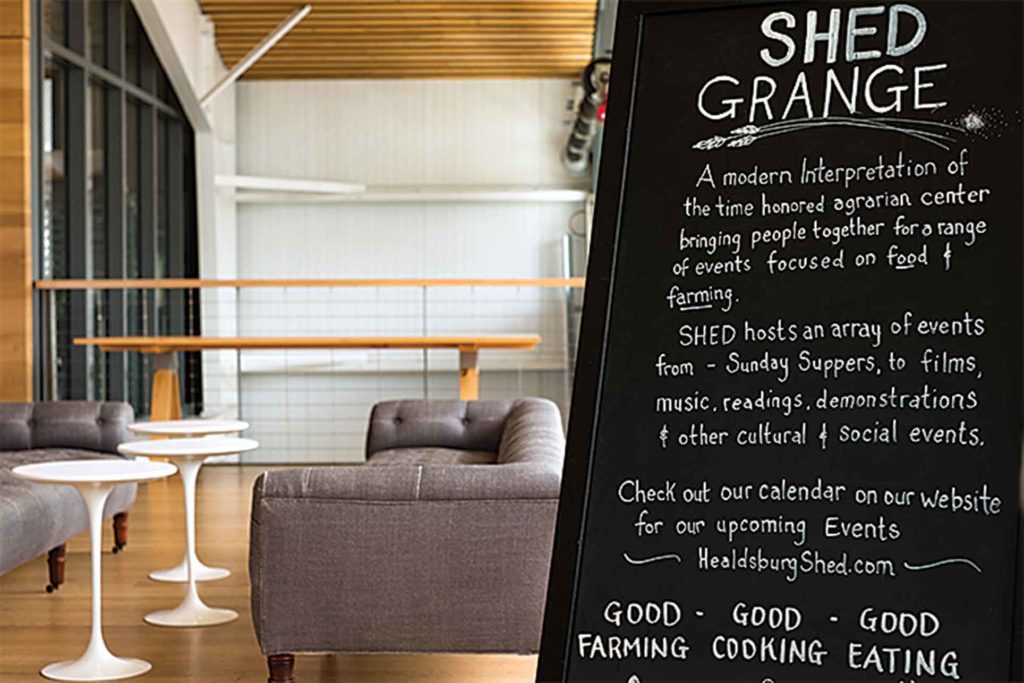 With fare and produce from nearby farms, SHED combines a top-notch cafe with coffee, a fermentation bar, housewares, farm tools, a larder and events space…energizing the community around support of local farms.

On SHED’s fifth anniversary, its success is linked to the present excitement around the world for fresh-food dining and small scale farming, as well as budding affections for all things rural among residents of crowded San Francisco Bay Area.

Farm to shop. SHED’s story reaches back to the 1970s when, in college, Daniel and Lipton experimented with compost and began thinking about how they might one day be farmers. The couple’s Healdsburg journey began in 1996 when they bought a 16-acre farm situated on rich alluvial soils outside of town next to Dry Creek. They built a rammed-earth house and raised a family. He, a soil scientist, now works restoring San Francisco Bay Delta wetlands; she, while raising children, has developed education programs in local schools. In 2010 when the couple realized they could buy the old appliance store property at 25 North Street, they were ripe for adventure.

A main focus was to be sensible and efficient with existing structures. “We tried to use the building as it existed, putting a second floor over it, but that was structurally challenging,” Daniel says. The couple had the old building removed, recycling the steel and other parts, and with the help of Jensen Architects and Soule Building Systems, erected the current glass-walled, steel-trussed structure that looks alternately like an airplane hangar and a hay barn-inspired cathedral. The building’s steel frame is made from crushed old cars and its insulation comes from recycled denim, Daniel says. To manage interior temperatures and expand public spaces, the building’s glass-paneled walls roll open like garage doors. Interior walls are paneled with locally harvested wood in such a way as to make pleasant acoustics. The soaring, open, sun-lit interior space is exciting, airy, and fresh.

Setting the tone for its 100 employees to make the place welcoming and fun is a key ingredient to success, Daniel says. “It’s so important to think about beauty around you,” she says. “Why not take the time to make things beautiful? It enhances communication when people feel good in a place, and when people are friendly.” 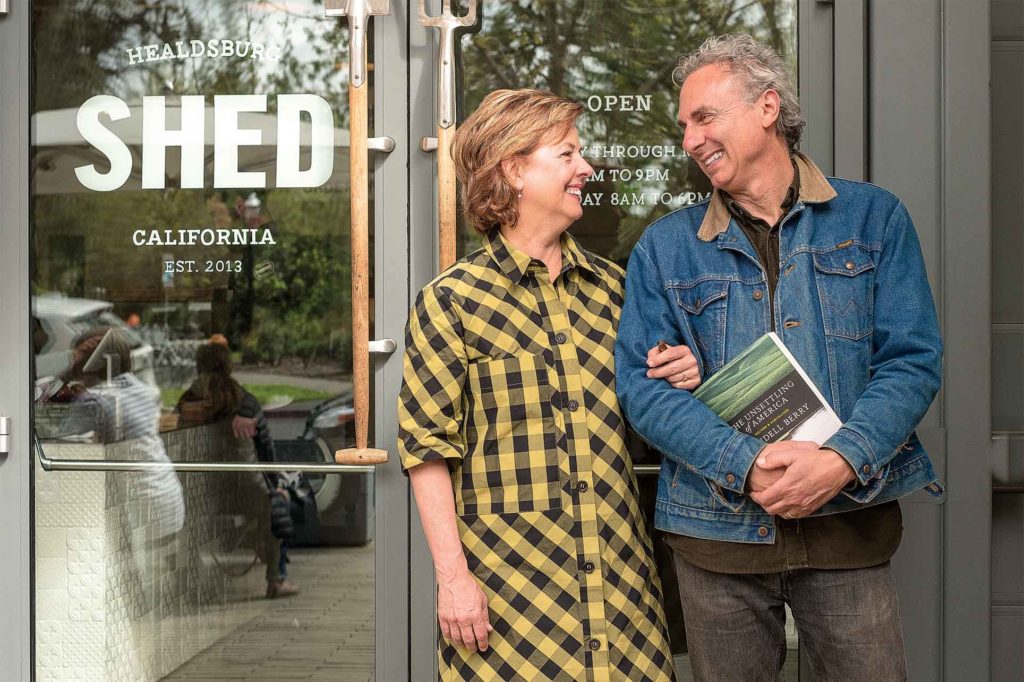 Healdsburg, Calif. area residents Cindy Daniel and Doug Lipton showcase agriculture in their Sonoma County town through multiple businesses inside of one new building at “SHED.”

Everywhere, people bubble with chatter. Today is not an anniversary date or festival: It’s just another Saturday at SHED. The buzz is part of the plan.

“In a world that’s becoming virtual,” Daniel says, “we wanted a place where people come together, where they are welcome on all levels. We set up the store to reflect that.” She takes inspiration from author Wendell Berry, who first grabbed Lipton’s attention in college: “An agrarian mind begins with the love of the fields and ramifies in good farming, good cooking, and good eating,” Berry wrote.

To this end, shelves and tabletops display goods made locally, including a line of modern-rustic ceramic plateware, “bug hotels,” natural-shaped beehives handmade from rye grass, and Japanese seasonings. SHED began producing its own line of finishing powder this year based on Chef Hoffman’s recipes. “You may taste something in the café on any day that has our finishing powder on it,” Daniel says, “maybe sauerkraut, charred eggplant, smoked onions. We also have our own line of pickles and olive oils. We grow a French variety of olives. We buy seaweed foraged locally in the Pacific Ocean.”

Getting together. The downstairs commercial space is only half of SHED’s mission. The other half is addressed upstairs in a wide open, wood-floored event gallery. Quiet this Saturday morning, it is being prepared for an afternoon herb workshop.

“This is what we call our modern grange,” Daniel says. “We do workshops, panel discussions, films, dances, music, and community suppers. We’ve put on hundreds of community and educational events in five years.” 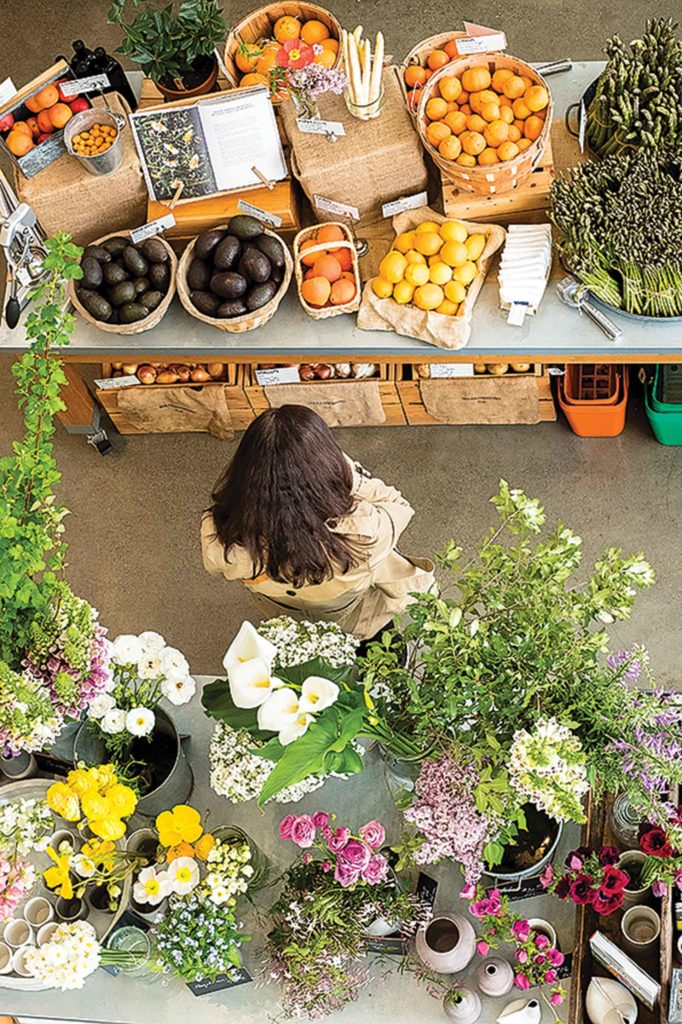 The couple arranged with the National Grange of the Order of Patrons of Husbandry to use the “Grange” name in their logo, but SHED is not a member of the fraternal order, Daniel says. “Our idea of the modern grange is to create a place where people come together around food and farming, so we just thought of this as a grange,” she says. “So many newcomers to town have said they’re getting to know their community through SHED by coming to the dinners or classes, or getting coffee. It’s really nice to know we’ve become a community hub.”

With its multiple parts, SHED combines so many business models that there’s been a big learning curve. “We thought it would be simple, but it’s really seven businesses in one — from the grocery to the restaurant to events to retail,” Lipton says. “When we opened, we’d never had a restaurant before. We’d had a food coop, but not a restaurant. Our intention was clear: We were never here to sell a lot of stuff. In fact, our friends call us reluctant retailers. Selling is not in our being, but our intention is to celebrate what’s good on the land and the earth and in the people who grow from it.”

Fortunately for the two of them, the 80- to 100-hour work weeks are easing up Lipton says. “This is a labor of love,” Daniel says. “To offer a place where a lot of people are coming for different things — that’s been a real pleasure.”