The first week of February is still months away but both Wade Holman’s and Kim Knight’s hockey teams are counting the days until the next Canadian National Pond Hockey Championship (CNPHC) tournament gets underway at Pinestone Resort near Haliburton, Ontario. There’s just something about playing the game outdoors in a natural setting that captures the imagination of hockey fans everywhere. The two-weekend tournament attracts up to 900 players on 150 teams every year.

The tournament’s website (canadapondhockey.ca) describes the event as the purest form of hockey. It takes competitors, volunteers and spectators alike back to the roots of game amidst a breathtaking northern landscape setting. Four-skater teams with two substitutes play two 15-minute action packed halves on pint sized rinks. There are no goalies, no slap shots, no body checks and no fighting. Helmets are mandatory; wearing protective equipment is optional, but it’s highly recommended.

The game moves at a frenetic pace on the smaller ice surfaces. They’re high scoring, pass-pass-shoot competitions without much stick handling. Collisions aren’t uncommon. While the rules are familiar to anyone who’s played a game of road hockey on a suburban street, participants swear there’s something special about playing on a pond. 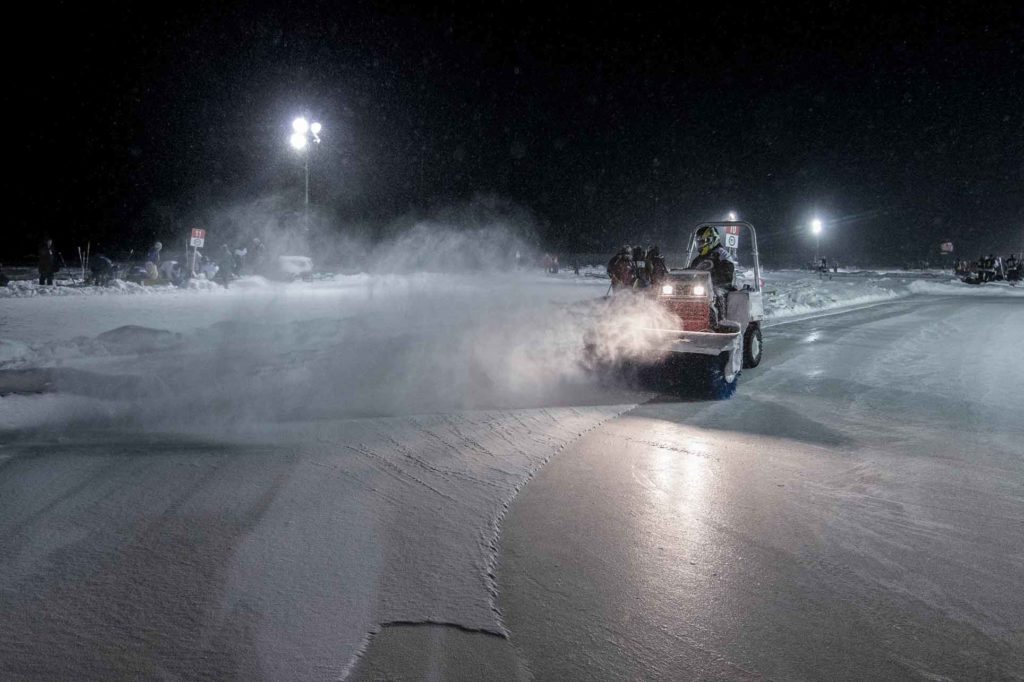 John Teljeur’s team of 100 volunteers often have to go to great efforts to make sure the ice stays in good shape through hundreds of games.

“We play rec hockey twice a week in Oakville, Ontario,” Holman says. “It’s a fun social thing to do every week. Pond hockey, though, is a once-a-year event that we look forward to. Most of the guys I play with are in their forties but I think being out on the pond brings back childhood memories of playing on a frozen lake or playing outside in the winter. Even at our age, there’s still that nostalgia of playing on the pond; there’s nothing like it.

“We had an 8:00 PM game under the lights on our first night at the tournament last year when it started to snow,” Holman says. “There was just something fantastic about playing out there with the snow falling past the lights and building up on the ice. Sure, it was -10°C weather and a little chilly out on the pond, but you can’t beat that feeling. It makes you feel like a child again.”

Kim (Kimakaze) Knight, from Bracebridge, Ontario, played on one of the original teams in the tournament when it first launched in Deerhurst Resort in Huntsville, Ontario, in 2006.  They had so much fun that the Muskoka Women’s Hockey League (MWHL) in which she plays and helps run has entered multiple teams ever since. She says it’s the best weekend of the year.

“It’s really different from playing in an indoor rink,” Knight says.  “You are always dealing with Mother Nature. The weather varies from year to year. We’ve played in snow storms that were so bad that you had to cover your eyes to keep the snowflakes from blinding you. Some years it’s been 30 below and we had to put toe warmers in the ends of our skates just because it got so cold. But that doesn’t matter; we’re here for the getaway and to have fun with like-minded, hockey-loving friends.” 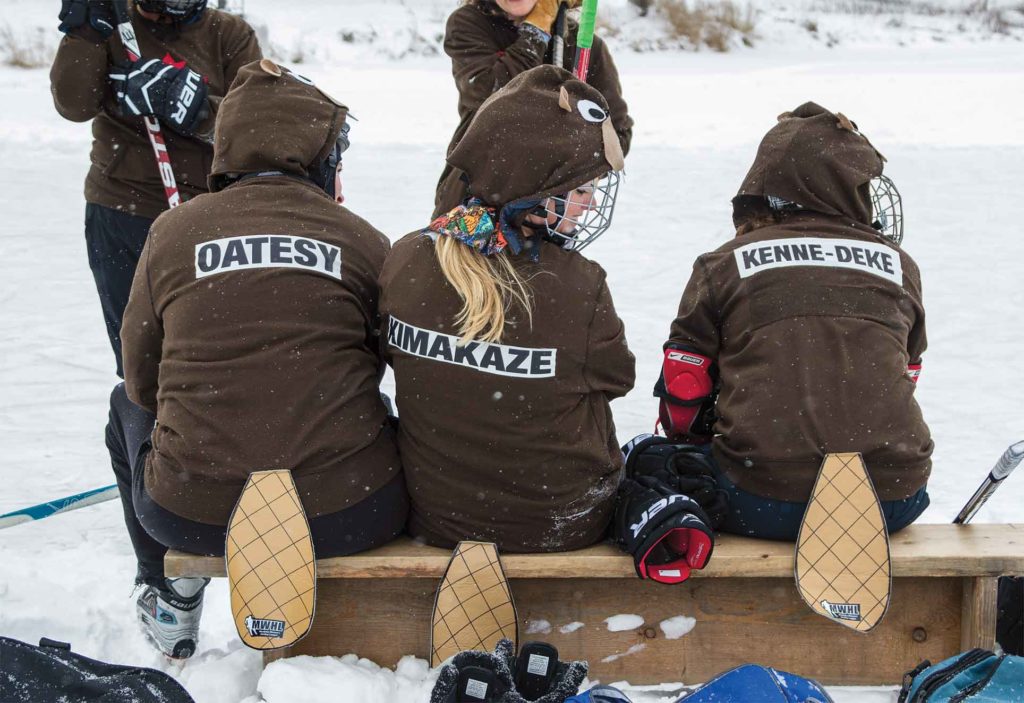 Kim (Kimakaze) Knight says that MWHL teams try to come up with new creative outfits every year. They were Canadian Beavers in 2018…all part of having fun with other hockey lovers.

Temperature swings. “The biggest difference between playing indoors and outdoors is the way the temperature changes affect the ice surface,” says John Teljeur, the tournament organizer and general manager of Pinestone Resort. “Indoor ice never changes but ice on a lake can be super hard or it can be soft depending on the temperatures. Since the ice is floating, and the water is always moving underneath under the ice, pressure cracks can open up during the game that weren’t there before.”

The CNPHC is so popular that it’s spread over two weekends. The first weekend is an open event for men’s and women’s teams younger than 35 years. The second weekend, the Masters, is for teams in the 35-plus age bracket. Both weekends have divisions for teams with a wide range of skill levels.

“I’ll probably get killed in the dressing room one day for saying this, but the honest truth is the women probably bring more to the tournament than the guys do,” Teljeur says. “There are some very competitive women’s teams with brilliant hockey players, but they have a lot more fun with it than the guys do. A lot of women’s teams have started to dress up. The event is becoming like the Stanley Cup meets Halloween. They’re having fun doing it and that’s what pond hockey is all about.”

“We wore jerseys the first year, but we decided to be creative with our outfits after that,” Knight says. “We started with lots of pink and some camouflage and it snowballed from there. We get together to craft our outfits, the goal being to try and be a little bit more ridiculous each year. We’ve been bunnies, cheetahs, dragons and were Canadian beavers the last year. One year we were Big Bird with really bright yellow fluffy outfits. The yellow fluff got everywhere. We’re still finding it to this day.”

The CNPHC is modelled after the World Pond Hockey Championships held annually in Plaster Rock, New Brunswick, says Teljeur. It’s one of between 100 and 120 similar events held across North America every winter. The events are subject to the whims of winter weather, so the actual number of tournaments varies from year to year. 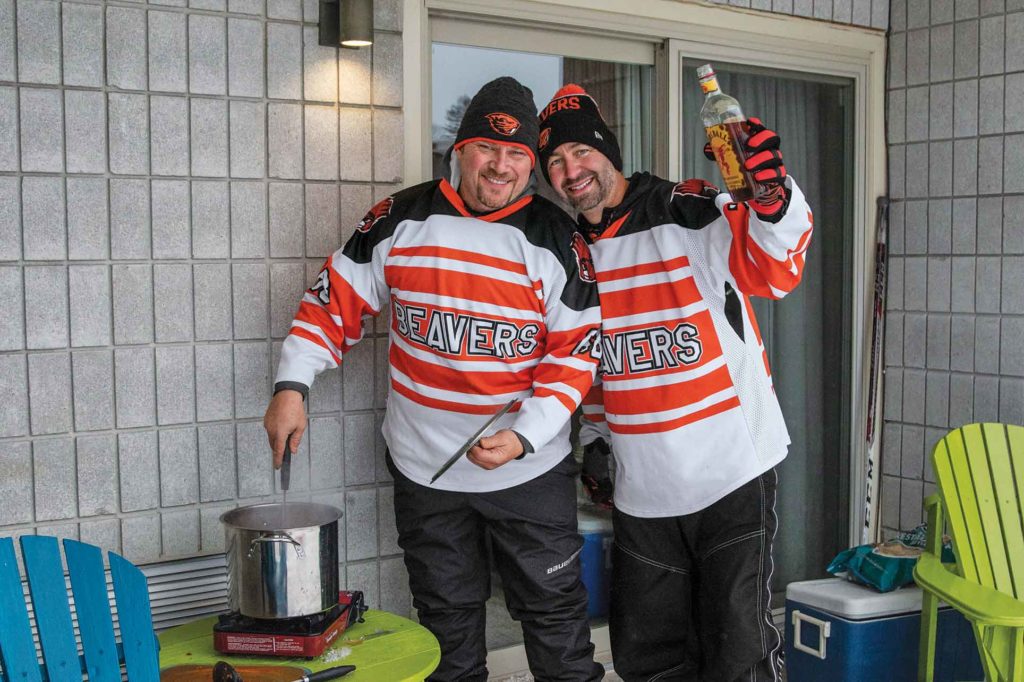 Battling the weather. Keeping 18 hockey rinks in pristine shape on a frozen pond through hundreds of hockey games is an epic struggle. Mother Nature has done something to keep the tournament’s 100 volunteers’ lives interesting every year Teljeur has been involved with the event.

“In January 2018, we had three rain events that obliterated all the snowbanks we had built on the ice for boards,” Teljeur says. “It created lasagna ice, a layer of ice on top of a thin layer of water on top of ice on top of the pond. We kept the ice clear of any insulating snow and continued monitoring the thickness of the ice. By the time the first weekend of the tournament rolled around we had 14 inches of ice.  Then just before the tournament started we had a big dump of snow. We cleared that off and by the time play started on Friday the ice was as good as I’ve ever seen it. Saturday afternoon the temperature shot up to plus 5°C. We tried everything possible to keep the ice together, but we finally had to recognize that Mother Nature was going to win this round and we cancelled the playoff rounds.”

The next weekend started off brutally cold. Ice expands as it gets colder so massive cracks started to open up across the playing surface. Teljeur’s teams spent Friday patching and flooding (coating the ice with water) to close the gaps. They hoped to flood the surfaces with firehoses to seal the ice after play wrapped up for the day. Unfortunately, their plans were disrupted by another heavy snowfall.

“You can’t flood in the snow because it creates a bumpy surface,” Teljeur says. “We called it off at midnight and planned to come back at 5:00 AM. It was still snowing when we got up, so we had to keep flooding the heck out of it with hot water until we got the surface we were looking for. It paid off because a couple of the players told us that they had never seen the ice better.”

Build your own. If you plan to set up a skating rink on a pond in your backyard, don’t take shortcuts when it comes to safety, Teljeur says. Start by picking a location away from any springs or moving water. It’s safe to take small equipment out on the ice once it’s six inches thick but aim for twelve. Do this by keeping your rink and the path to it clear of snow. Keep monitoring the thickness regularly, especially on a larger body of water, because it can deteriorate rapidly when temperatures change. You can smooth rough ice surfaces by flooding the ice with buckets of water or hoses. Use hot water if it’s an option because it freezes much faster and melts any snow, leaving a nice flat ice surface.