The Taft Museum of Art in downtown Cincinnati holds a fine collection of art—from 19th century American painters, Chinese porcelains, European masters, and many others. Its collection is of pieces mostly from long ago. But the museum occasionally exhibits newer work as well, and on this brisk day in April, one is being built on the museum’s front lawn.

As a handful of people are weaving thin saplings—nothing more than sticks really—amongst the several larger sticks stuck vertically in the ground, one man on the sidewalk stops and stares.  “Is this a new exhibit?” he asks. A worker says it is. There is a long pause before the passerby speaks again. “What is it?”

What indeed. The museum is a stately mansion built about 1820, and so the structure being built in front might seem odd and out of place. But it’s not. What is being built from sticks is art, a sculpture by Patrick Dougherty.

The sculpture is in its early stages, but in just three weeks it will meander and stretch, high and wide, free flowing across the entire front lawn, a whimsical delight that museum attendees will walk through to get to the front door. Dougherty is an artist well known for his sculptures made of this simple, humble material. He’s made nearly 300 of them across the U.S. and in countries all over the world—Europe, Japan, Australia, Canada, among them. (You can see more of his work at stickwork.net.)

Dougherty began this endeavour in the early 1980s after studying health administration in college and graduate school. Soon, however, he was moved to do something different. “I really felt compelled to make things and be a sculptor,” he says. “It was physical. It was my true calling.” 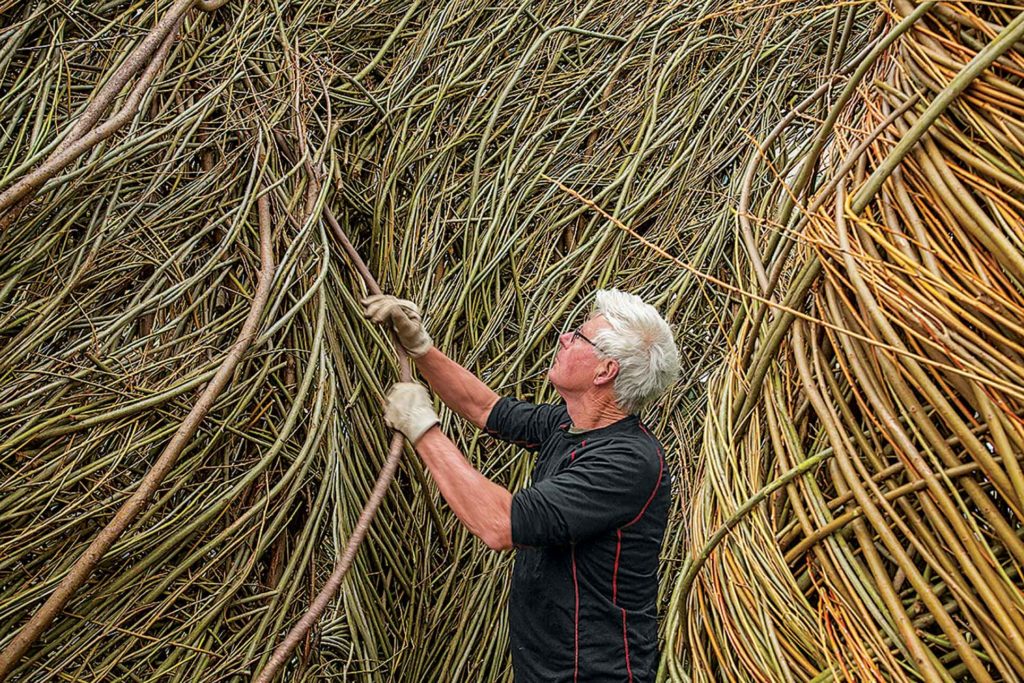 To create his sculptures, Dougherty uses simple tools…gloves and a good pair of pruning clippers.

But instead of sculpting with clay, Dougherty uses sticks. He sees it as honoring a deep heritage. “There have been a lot of great stick traditions—furniture-making, basket-weaving, fences, and parts of houses. All kinds of things from deep pasts and certainly from the Middles Ages. Sticks were a part of everybody’s life.”

Dougherty finds inspiration for his works on site and lets that be his guide, but the sculpture evolves as he progresses. The vision for this piece in front of the Taft Museum began from an exhibition it was having on Tiffany glass and Chinese vessels, artworks that use nature as a source. Patrick’s sculpture will reflect that with an Art Nouveau theme. His structures, individual “houses” with doors and windows, will be strung together at the top with a tendril, like in nature, as if it’s a natural growth of the land. He finishes the top edges with a neat, smooth roll—all done with saplings bent and interwoven. The depth of the texture of the entire piece is breathtaking. It’s light—and at the same time incredibly strong.

Each of his pieces is made with thousands of saplings stripped of their branches and leaves. Most saplings are less than an inch thick. Many are less than the thickness of a pencil.

These saplings are willow, trucked in from upstate New York, the result of a biomass energy project that didn’t work as planned. But Dougherty often cuts and uses local trees when he can. He’s used elm, dogwood, and a whole host of maples—sugar maple, Norway maple, red maple.

Dougherty begins each project by outlining the footprint of the sculpture with extension cords on the ground. Then he digs holes and places medium-size trees in groups of three or four at strategic spots on the outline to hold the structure in place. He, his son Sam, helper and fellow artist Elsa Hoffman, and a small group of volunteers begin laying the smaller saplings in place. Saplings go on the ground first, woven in and out of the larger trees and building their way up, all interconnecting with each other. 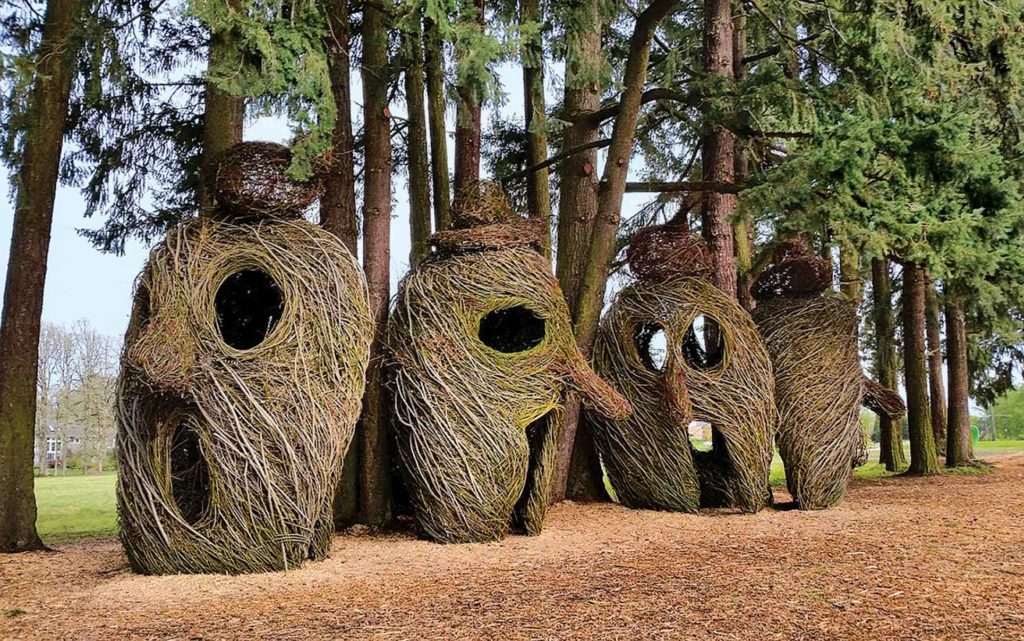 Head Over Heels (2017), a sculpture Dougherty did in Orenco Park in Hillsboro, Oregon. Photo by Valerie Otani.

Dougherty does about 10 such structures a year, spending three weeks per site. It means he is away from his North Carolina home most of the year. “I’m on the road a lot,” he says. “I’ve slept in a lot of beds. You have to strategize about how to survive when you’re on the road that much.”

One driving force is the connections he makes while doing this work.

“I love my volunteers and sponsors,” says Dougherty. Sponsors, like the Taft Museum, make the work possible with funding and help in coordinating the effort. He gives equal credit to the volunteers, most of whom come and stay for a day. “We all get along, and it shows in the kind of energetic pieces we are able to make.”

On this day, Michael Zhao, an architect in Cincinnati, has taken off from work to help out. “I appreciate the spaces and views Patrick creates.” The windows—holes large and small—are placed to maximize the views. The place where Zhao is working has a fine view of a skyscraper close to the Ohio River. “There’s a lot of thought put into how this structure is built, how it orients to the land,” he says.

“Sometimes we work without volunteers, but generally it’s more enjoyable for us with volunteers because we get to know a bit about the community. There are a lot of personalities that are enjoyable.”

Personalities like Bingo Billy, who set up a lawn chair near Dougherty while he was working on a sculpture in England. “We had a cadre of women come down the street and one said, ‘We see Bingo Billy sitting over there. You’re not giving him any money, are you?’

Dougherty smiles. “I said, ‘As a matter of fact I do. I give him a pound a day not to say one word to me.’”