A person doesn’t simply visit David Domanski-Miville’s Boise, Idaho, yard—they explore it. At first glance it looks wonderfully wild and whimsical with blue-tinged bunch grasses standing shoulder to shoulder with waving, beflowered boughs of greenery. However, upon closer inspection hidden treasures of varying shape, color and texture emerge, many with a prickly facade.

When purchased in 2013, David’s yard was a carbon copy of every other in the area. Grass, flowerbeds, a few trees. “We had 15 species present in the front yard, which included everything, even the trees and the Kentucky bluegrass lawn. There was very little diversity,” says the kindergarten and English/Spanish program teacher. Today, it’s a botanist’s dream with a roster of around 225 species nestled into the modest 35-by-40-foot space. Every square foot is brimming with flora from tiny to towering waiting to be discovered and appreciated.

There are 15-plus species of grasses, around 10 species of barrel and ball cacti (Echinocereus and Escobaria), 15 to 20 padded prickly pear species (Opuntia), around 35 species or varieties of agave, yucca, and hardy succulents, such as Sedums and Sempervivums, around 40 different types of bulbs, and native plants of all kinds. Many of which local gardeners wouldn’t believe could survive in Idaho.

“Idaho is interesting because it’s semi-arid, not a desert, yet it often just stops raining around June and gets very hot, like a desert, and it won’t rain again until September or even October,” David says. Which led him to hunt out low water-use plants as he transformed his outdoor space.

The yard already featured one raised berm, and David utilized a massive pile of sand and gravel waste material from the backyard to build more, giving him extra space to position and better view his plants. While the material isn’t suited to traditional lawns, it was a near-perfect fit for the scrappy plants he wanted to use. 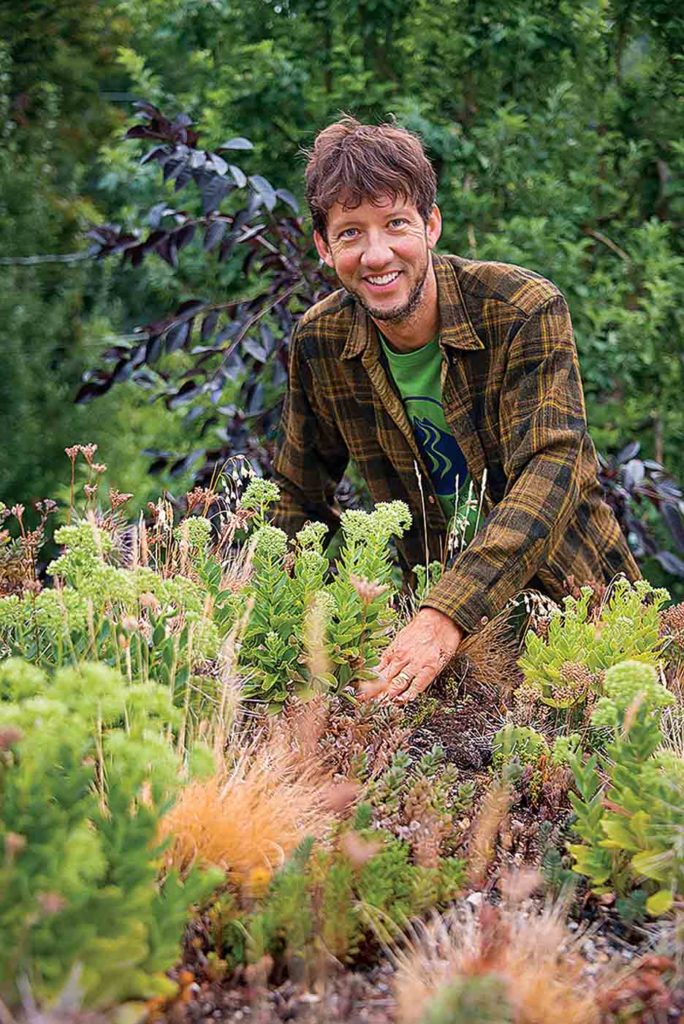 This certainly wasn’t a quick job. David has made an adventure of gradually adding plants to the landscape. “This is very much a trial garden. I’ll get a plant, give it a try, and see if it works,” he says.

For David, the discovery of a new plant provides as much fun as growing it. While he counts himself very fortunate to have top nurseries specializing in cold-hardy cacti nearby—Plantasia Cactus Gardens in Twin Falls and Geoscape Desert Nursery in Meridian—that have yielded many top-notch finds, shopping isn’t really his style. He’s a bit of an Indiana Jones when it comes to plant gathering, scouring the region for rare finds and rescuing plants destined for destruction.

“I wrangle plants. When I’m out walking, biking, or driving, I’m always on the lookout for unique species,” he says. When something catches his eye, often in someone’s yard, he’ll knock on the door, ask them about the plant, and see if they’ll allow him to take a cutting. The answer is usually, yes. “Many people have no idea what the plant is. It’s simply something that came with the house. These are often great species that aren’t being appreciated or are even at risk of being removed.”

This is how he came to add a delightful purple-padded prickly pear (Opuntia aurea purple form) to his collection. His currently modest plant came from a massive specimen in a local yard. He’d never seen the species and the owner didn’t consider it anything special. He’s rescued unique plants from abandoned lots and yards slated for bulldozing. “I feel in some ways like an urban conservationist of plants. I find things that are rare and beautiful and try to save them. Especially with cacti. A lot of people have an aversion to them based on how they’ve been used in landscaping,” he says.

The practice of completely replacing grass with only cacti and rocks can be very harsh and off putting, he says. Instead, he pairs cacti species with a wide range of other plant families much like would be seen in nature. “In the wild, you’ll almost invariably see cacti mixed in with woody perennials and tender annuals. I never pair harsh with harsh or soft with soft. I try to intermix everything.”

He notes the fine leaves of perennials or grasses look fantastic up against the variously hued pads of his prickly pear cacti. While plant positioning may seem random, David—who has a bachelor’s degree in fine arts and loves creating from print making and drawing to pottery—plans his plantings with an artist’s eye. “It really needs to have a design. I don’t just put plants here or there, I work to create texture and contrast,” he says. 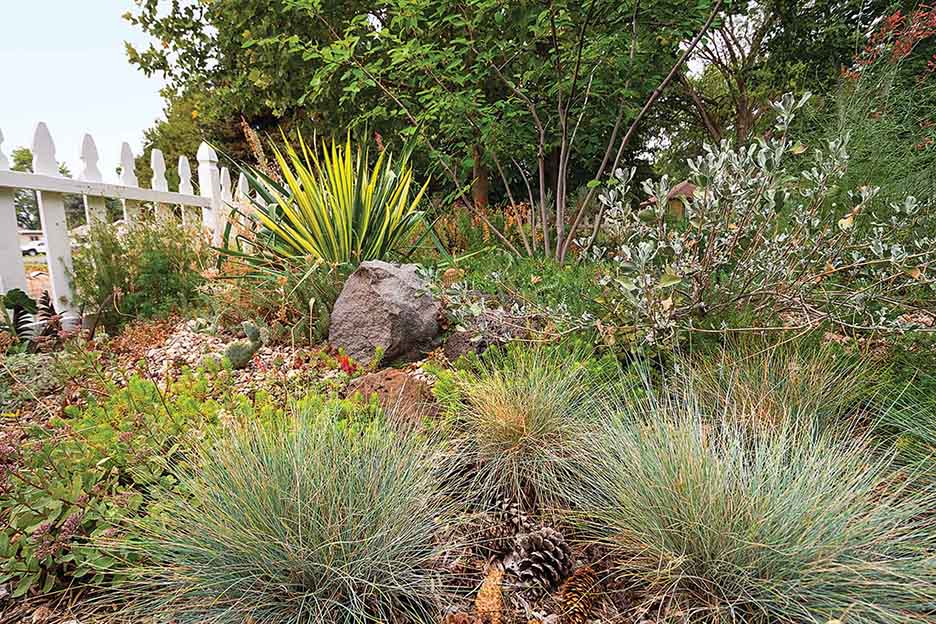 Color is also plentiful. Each cactus is capable of producing spectacular blooms. “Even a tiny cactus no more than 2 inches across and 4 inches high flowers. They put out these gigantic hot pink blooms that are 3-4 inches across and make up more than 40 to 50 percent of the plant at that moment. That’s a huge cost to the plant and it’s really something to see and celebrate,” David marvels. And when the cacti aren’t blooming, David’s innumerous bulbs put on a show. “My wife always asks, ‘Just where are you going to put them?’ when I’m buying yet more bulbs. There’s always room for more bulbs!”

He views his yard as a stage and the plants actors. Each get their own performance so as to not overshadow each other. Bulbs take center stage for their colorful production first thing in the spring, often poking their noses out before the snow has even retreated, and late in the fall. The cacti take their turn in the spotlight during the heat of summer.

The cacti continue to provide shape well after snow flies, too.

“Even in winter I can look out my front window while having my coffee and see my little Dalek [his nickname for one of his barrel cacti which resembles a popular sci-fi franchise villain of the same name],” he says. “There’s a persistence of form with cacti and succulents that I really value.”

There’s also persistence found in the gardener. Cacti and succulents are slow growing. It may take years for a plant to establish, flower, put on pups, and really thrive. But for David, it’s all relative.

“They’re so charismatic and fantastic. It’s really worth the wait,” he says.”