Times have changed! The first two generations of Canadian and American children after World War II grew up constantly hearing their mothers order them to, ‘go outside and play; don’t come back until it’s time to eat.’ Most couldn’t wait to get out of the house. But, we’re told, that seems to have changed when video games came along in the mid 1980s. Most born after that have been belittled for spending their free time playing in virtual reality worlds on their phones, tablets, and gaming systems instead with friends outdoors. But that might not be true. Maybe preference has nothing to do with it; perhaps they’ve just been waiting for permission to play. At least that’s been the case at the International Garden Festival, held annually at the Jardins des Metis/Reford Gardens, near Grand-Métis, Quebec.

Normally any children found in a grand formal garden are reluctant guests, says the gardens’ general manager Alexander Reford. They’ve been dragged along by a plant-loving parent and are constantly being told to stay on the paths and make sure they don’t touch anything. It’s not a lot of fun.

But the Jardins des Metis/Reford Gardens has two distinct sides. One side contains the Estevan Lodge and the formal plant and flower gardens that appeal to passionate gardeners. The other is devoted to the garden festival. It’s a place where top young landscape designers and architects from around the world have showcased their abilities to combine artwork and plants work to create vibrant modern displays since the turn of the century. Since 2017 though they’ve been trying something new; themes have been selected that challenge entrants to create designs that put outdoor fun and adventure front and center to show children that playing outdoors in nature is a fun way to spend their free time.

“When parents come through the front gate they march their children through the historic side first and go past all the plantings,” Reford says. “It’s amazing to see how the kids react when they come to the festival side and find that it’s like a giant playground. It’s instantaneously positive. Children are allowed to leave their parents hands and interact with the object as opposed to just looking at them. There’s lots of creative use of bright colors. They can put things on, take things off, climb and jump.” 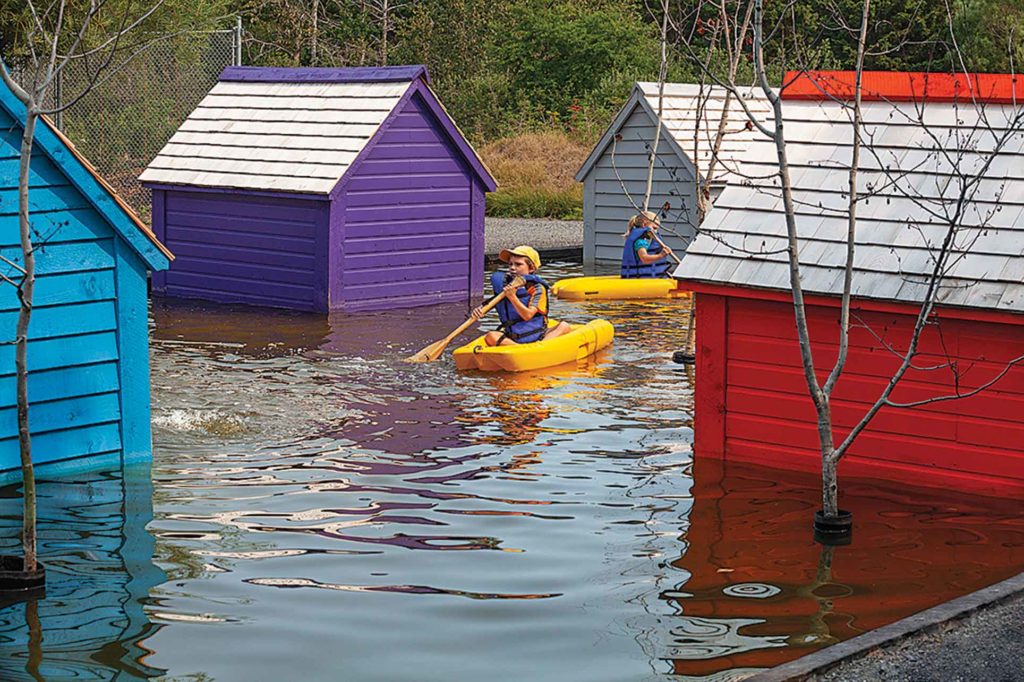 Benjamin Labrie paddles a kayak through the flooded village in La ligne de 100 ans, the festival’s most popular exhibit in 2018 .

“Usually children are never allowed to touch works of art because they don’t want to damage the artist’s work,” says Geneviève Labrie from St-Jerome, Quebec during a visit to the garden with her father and four children. “So, the children were very reserved, passive and just looked at all the structures from a distance when we first arrived. Once they understood it was okay for them to go touch and climb on them they really go into it. The response has been overwhelmingly positive, you can see the joy in their faces while they eat their ice-cream cones,” Reford says. “We have lots of parents tell us, ‘My kid so loved it; it’s such a great outing; we thought we’d spend 45 minutes here and we stayed for four hours.’”

No wonder children of all ages find it fascinating. They get to play with true works of art in imaginative new ways. Some works include familiar pieces of playground equipment like swings that everyone knows how to use while others challenge them to indulge in flights of whimsy. The most popular exhibits are reinstalled year after year.

Trees, for example, are stationary, but one festival favorite allows children to push fully grown trees around the garden on train tracks. Younger ones just love it because where else can they move trees around. Another has a series of tree trunks of varying sizes patterned together to resemble the Giant’s Causeway in Northern Ireland.

The festival selected seven new design entries in 2018. These included: “aMaizeing” which has a giant trampoline hidden inside a corn maze; “Assemble,” an exhibit that allows children to build their own stick forts, and “Le rocher très percé”, an outdoor climbing gym that’s a scale model of the Gaspé Peninsula’s most famous landmark, Le Rocher Percé. The year’s winning entry, and the festival’s most popular exhibit was “La ligne de 100 ans” (the 100 year flood).

“La ligne de 100 ans refers to how high flood waters could be in a once in a 100 year flood,” says Melanie Dereymez an intern with the project’s designers, Hatem+D/Etienne Bernier Architecte, in Quebec City. Dereymez and fellow intern, Théo Jarrand, frantically worked to finish the project for the opening day. “Coastline flooding is an important issue in Quebec. Whenever one happens, peoples’ natural response is to go see how bad it is. So, we played on this by creating a miniature flooded village that children can go explore in kayaks.” 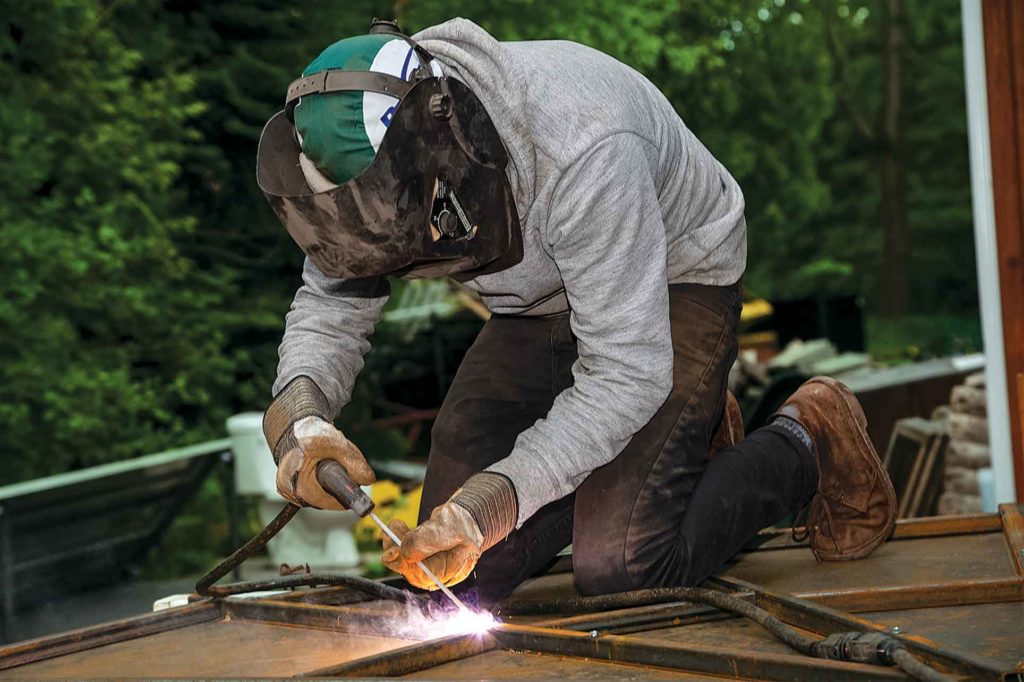 Max Schnutgen welds together the base structure for their entry Carousel.

“Olivier, my 13 year-old, just loved paddling around it,” Labrie says. “He explored it by himself first and then took his sister around too.”

Childhood inspiration. Some designers turned to their own childhood for inspiration. Katie Strang, Christine Dewanker, and Craig Van Ravens came up with the idea for, “Assemble” from their fond memories of building forts in the woods.

“The idea was partially based on our own experiences building shelters and playing outdoors as children,” Strang says. “It’s something that a lot of kids younger than us don’t have that chance to do. We’re hoping that our installation will inspire some kids to play with the world around them.”

They built a few trapezoidal shelters as examples and a then left a few partially constructed ones to encourage children to try to build their own. Structural spines for the unfinished ones are tied to trees and the brightly colored loose sticks needed to complete one are scattered around them. All of the materials in the structure were found on the garden grounds. All the logs and sticks that were used were scavenged from the woods around the site.

“The forts are sized for children,” Strang says. “They’re no taller than six feet at their highest point so you have to crouch down to go inside. It creates a great little hiding place and it’s something children could build on their own.”

The idea for the Spanish designers, Marta Milà Pascual’s and Marc Torrellas’ project, “aMaizing”, came from the cornfields that Torrellas played in as a child near his parents house in Barcelona. After all, they reasoned, corn comes from America so it made sense to use it in their design.

“We started playing with the idea of how the landscape would evolve over the season,” Pascual says. “So, we decided to create a corn maze that had a ground-level trampoline in the middle. The plants would start out small but as they grew it would create a maze. That way children could jump on the trampoline and see the surrounding area over top of the corn. We included other circular motifs like a sandbox filled with corn seed and a straw bale that would perhaps be reminiscent of crop circles.”

“We always are interested in finding the history behind any project we work on,” says Olivier Laplante-Goulet with the Montreal, Quebec firm Humà Design that came up with the concept for the “Le rocher très percé” design. “So, we started by looking for recognizable icons from the Gaspé region that we could design a play structure around.”

“Nothing is more famous for the Gaspésie people than “Le Roche Percée”, says fellow designer, Stephanie Cardinal. “How amazing would it be to let kids play on the most famous rock in Quebec?”

“The rock (located off the tip of the Gaspé Peninsula) is protected now, so the public can’t walk there anymore,” Olivier says. “So we created a 1/40th 3D scale model climbing gym of it that people can touch and climb on. The climbing structure itself is similar to the vintage playground spider climbing gyms that were popular in the 1980s.” It was important for the designers to have a structure that would encourage children to run and play. After all, they reasoned, the gardens are a four-hour drive from Quebec City so by the time they arrive, they’ll have lots of energy to burn off. 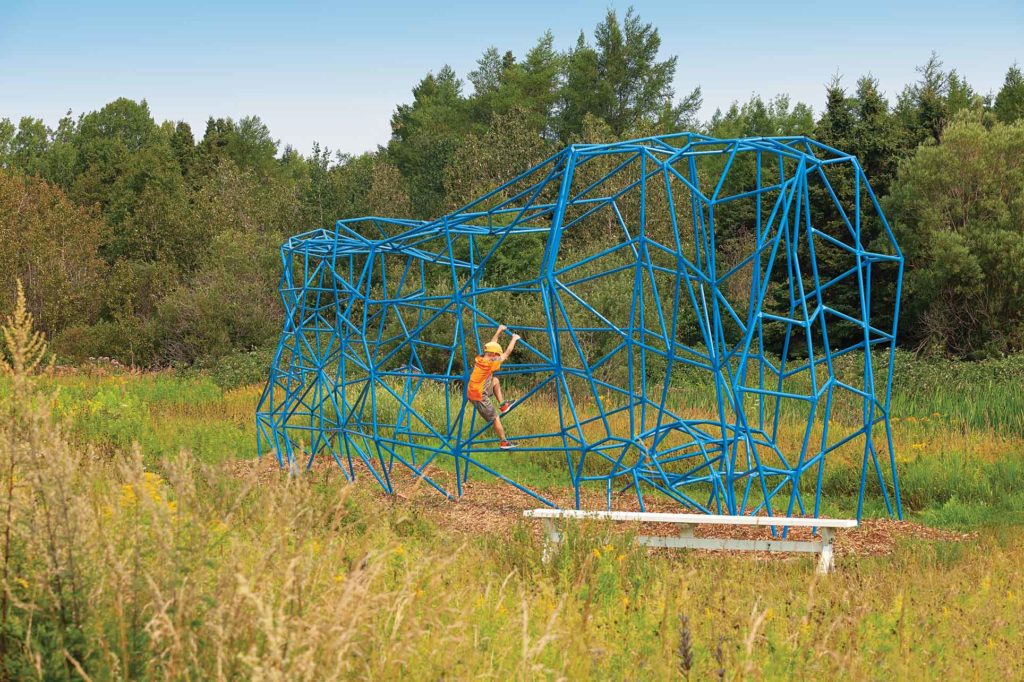 Le rocher très percé is a climbing gym modelled after the region’s most famous landmark.

Return to its roots. In many ways, having part of the Jardins des Metis/Reford Gardens dedicated to outdoor activities is a return to its roots. Canadian Pacific Railway magnate George Stephen bought the property at the junction of the Grand-Metis and Saint-Lawrence River in the 19th century to build a salmon fishing lodge. He left it to his niece, Elsie Reford (Alexander Reford’s great grandmother), who shared his passion for salmon fishing. In 1925, she came down with appendicitis and her doctors forbid her from going salmon fishing for the season. They suggested she take up something more passive and feminine, like gardening.

“So, she literally rethought the property and transformed it from a fishing lodge into one of the great gardens of eastern Canada,” Reford says. “It was astonishing to many at the time because it was thought that the climate was too inhospitable for many plants to grow. But through trial and error over time, she became an expert horticulturist. It turns out that many plants that struggle in Montreal do well here because the cooler wet climate eliminated the need for irrigation systems. Even though the winters are cold and harsh, we get between three and four meters of snow which acts as an insulating blanket for the gardens and fragile plants.”

Since Reford came to manage the gardens in 1995 he’s been continually trying to adapt the gardens to make them more innovative, exciting, and relevant to attract a new clientele. The Gardens have become noted for their incredible integration of artworks into the displays. Some artworks are commissioned; others are on loan from museums and the Art Bank of the Canada Council of the Arts.

It also makes it more interesting and dynamic for the general public. The child-focused theme, Playsage I – Come outside and Play, was such a success in 2017 they repeated it in 2018. The 2019 theme, Terrains de Jeu (playgrounds), follows up on their success. They’ve turned the gardens into an attractive venue for school groups and families with children. More than 10,000 children of all age ranges now pass through the gates in school groups, day camps, or just travelling with their parents.